Has two years ever felt this long? Since I last left Cannes, PARASITE went from a Palme d’Or winner to a Best Picture winner, America elected a new President, and large parts of the world have been put to a stop through three waves of a global pandemic. Among the casualties was the Cannes Film Festival, which could not take place in 2020. Even plans for the 2021 edition, delayed by two months to July as they were, have been looking dicey as recently as a few weeks ago.

Well, with the world premiere of French cult director Leos Carax’s pop musical-drama ANNETTE, the 74th Cannes Film Festival actually kicked off last night. Like, in an actual room with actual guests and journalists, very much physically and non-metaphorically. That by itself is cause for celebration not just because of the signal of recovery it sends to the movie industry, but also the fact that cinephiles around the world will now have another batch of Cannes-selected goodies to look forward to.

Courtesy of ANNETTE, our first taste of this year’s much anticipated super-sized competition proved to be – fittingly so – a lot. Over 140 minutes, it sees a European arthouse auteur take on American musical theater to tell a story of grand, operatic themes of love, death, salvation with a supernatural twist. For me, this mix doesn’t always gel, and I would advise – for the sake of the film above all – caution in consuming the breathlessly gush-y initial reviews/headlines coming out of opening night. At the same time, it’s important to note that when ANNETTE works, it literally flies.

In the film, Adam Driver plays successful stand-up comedian Henry who is known to provoke his audience with violent gags and morbid jokes about death. Marion Cotillard plays beloved opera singer Ann, who has won over people’s hearts for dying ever so exquisitely on stage in various pieces. The two celebs fall in love and Annette is born. But the bliss does not last for Henry’s career goes into free-fall after scandals about his behavior break out. To mend the wounds of their relationship, the couple goes on holiday and that’s when tragedy strikes.

So this is the spoiler-light part of the film that I was not completely sold on. I did not find Carax’s idiosyncratic sensitivity – which worked wonders on films with an equally out-there set-up like HOLY MOTORS – to be a natural fit for the boy-meets-girl narrative, the trouble-in-paradise storyline, or just basically anything straightforward. BUT, then baby Annette comes along. And as soon as the creepy-cute wooden doll with computerized expressions shows us what she can do, the film takes on a whole new life. 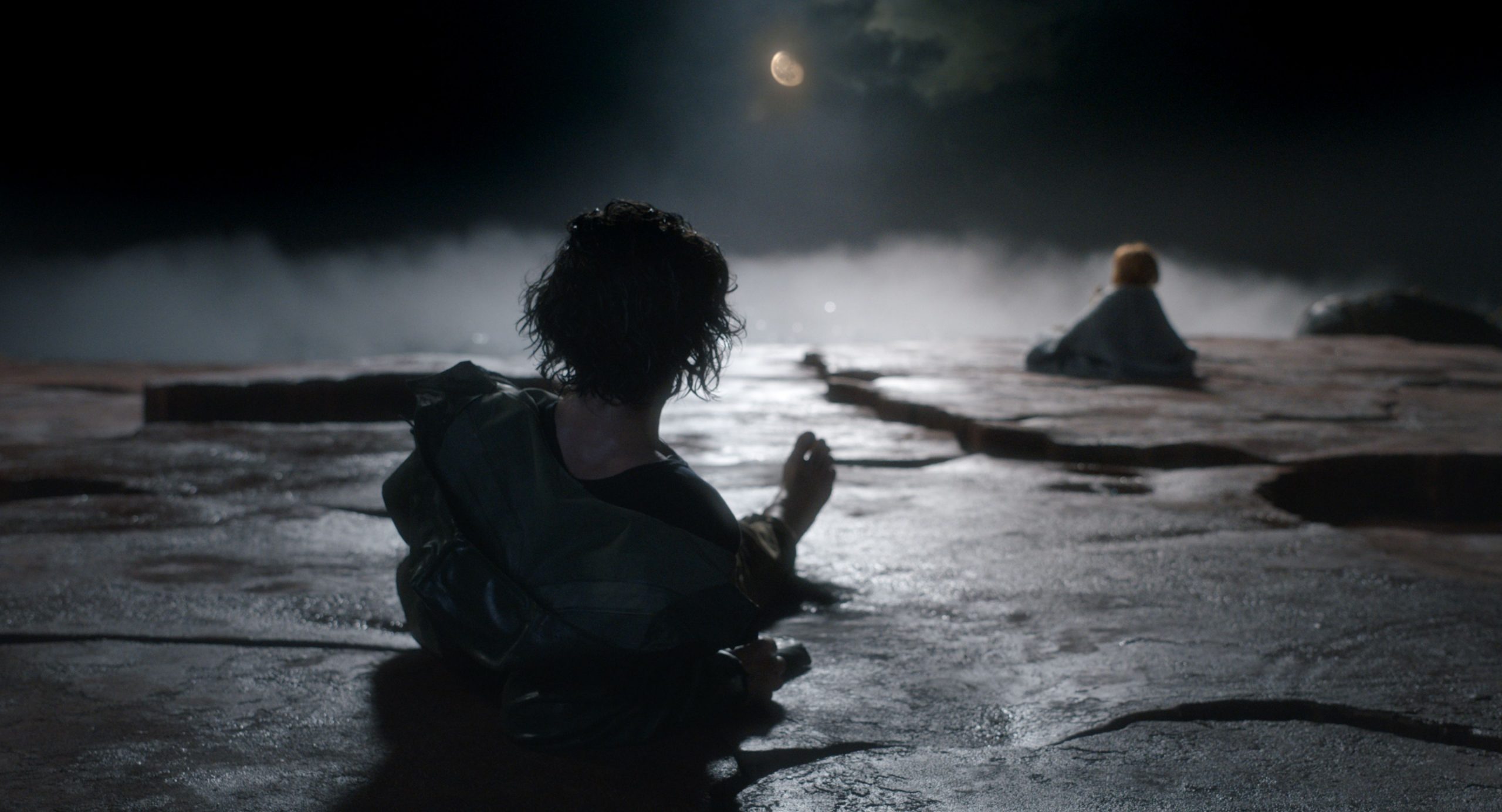 The second half of ANNETTE is much darker, weirder in tone. And I loved it. It’s to see a cold-blooded murder, a dreamily offbeat court scene and a singing baby exacting revenge all worked into one crazy soundtrack that we truly need a Leos Carax musical. It’s about being electrified by his edgy, punk-rock energy. The scenes of Annette showcasing her power and commanding the attention of whole stadiums, in particular, are such perfect marriage of visual spectacle and oddly sinister undertones they send chills down your spine. In these moments you remember why you bother to come to Cannes – to be reminded that you can still be surprised, indeed shaken by what you see on screen. Cinéma!

Cotillard is luminously watchable as always, although her Ann has less room to develop as a character. Driver, on the other hand, really got to sink his teeth into this meaty (no, we’re definitely not referring to the amount of skin he shows), emotionally, dramatically charged role. Henry is impulsive, selfish, jealous, angry, pitifully insecure – a Wagnerian antihero at the center of this extravaganza – and Driver commits to it 100%. With thunderous intensity and imposing physical presence, he breathes life into the ugliest, shadiest aspects of Henry and it’s a thrill to watch.

Props also to the designer and animation team responsible for the creation of Annette. Remember the fuss about Bradley Cooper holding a fake baby in AMERICAN SNIPER? Well, Carax not only used a doll for Annette but made it even more fake by highlighting the polished surface and carved joints. Her birth scene is literally a bunch of nurses singing around a puppet with immobile limbs sticking out in the air. Later when we meet her, it remains a jarring sight as there’s something unspeakably wrong about human actors coddling a wooden figure with a hint of soul in its eyes. Annette is no Annabelle or Chucky, though. Her look and expressions are not evil at all, just lifeless enough to keep you on edge. It’s a brilliant idea beautifully executed that hits the darkly fantastical register the film is aiming for.

So that was the first film I saw in Cannes after a two-year break. You’d think things will feel unfamiliar after such a long wait, but it all comes back fairly quickly. The excitement, exhilaration, and of course the exhaustion. This year they are making us book tickets to each screening two days in advance, so as to avoid the infamous lines in front of the theaters. But it soon became apparent that the waiting just moved online, as the booking website crashes every morning without fail the minute it opens, leaving sleep-deprived journalists refreshing their computers for up to two hours in order to get into the Verhoeven or the Ozon. But hey, what would the Cannes experience even be without the anxieties and stress? Luckily, with 24 titles in competition alone, we shall have a few great films to talk about in the next week and a half.