Taking a break from the official selection, we shall check out a pair of titles from Cannes’ esteemed parallel section Directors’ Fortnight. Both hailing from Latin America, these films transport us to the realms of myths and legends and, in the process, highlight the very real plight of women in a continent gripped by religious fanaticism.

In CLARA SOLA, writer/director Nathalie Álvarez Mesén’s pristinely confident feature debut, we follow the titular heroine as she navigates a life whose challenges only slowly become apparent. Clara is around 40 and lives in a remote village in Costa Rica with her mother and niece. When she’s not spending time playing with beetles or talking to her favorite horse, Clara gets dressed up by her family to be the centerpiece of a ritual that draws villagers near and far.

Clara herself doesn’t seem to mind being put on a pedestal and worshipped by throngs of desperate strangers. And through these gatherings, which supposedly cure all kinds of diseases of the attendees, her mother maintains the status of a high priestess, revered by the faithful locals. When her 15-year-old niece Maria finds a boyfriend in the hot new farmhand Santiago, however, a desire is awakened in Clara and things start to get complicated.

With great naturalism and a captivating sense for detail, Mesén vividly describes an ancient world untouched by modernity. She takes you deep inside forests and mists that seem older than time, and makes you really feel the place that Clara calls home. It’s a place of raw majesty not dictated by any rules except for how things have always been. And if a woman’s sexuality is seen as unworthy of divinity, extreme measures will be taken to keep those hormones down.

It turns out that, in order to “preserve” her supposed healing powers, Clara has been made to lead a very lonely life indeed. Not only is she forbidden to have any romantic relationships, she’ll be punished and shamed if her mother so much as catches her touching herself. Being denied her sexuality even as she approaches middle age, Clara has developed coping mechanisms that made her a bit odd to say the least. She’s introverted and chronically awkward, to the point where she can’t even walk properly. When Santiago enters her isolated life, it stirs up something dormant that her controlling mother and the complicit villagers might not be ready for.

Lead actress Wendy Chinchilla Araya is sensational. Clara is a complex character in a very specific way and she gets it. Despite the labored movements and withdrawn posture that give Clara a distinct physicality, she never plays her for someone less than abled. Instead, you never fail to notice how curious, alert and absolutely perceptive she is. It’s the combination of these qualities that makes Clara so compelling to watch. Mesén smartly keeps the narrative lean and uncluttered, saving one explosive flourish for the last act to make an astounding impact. 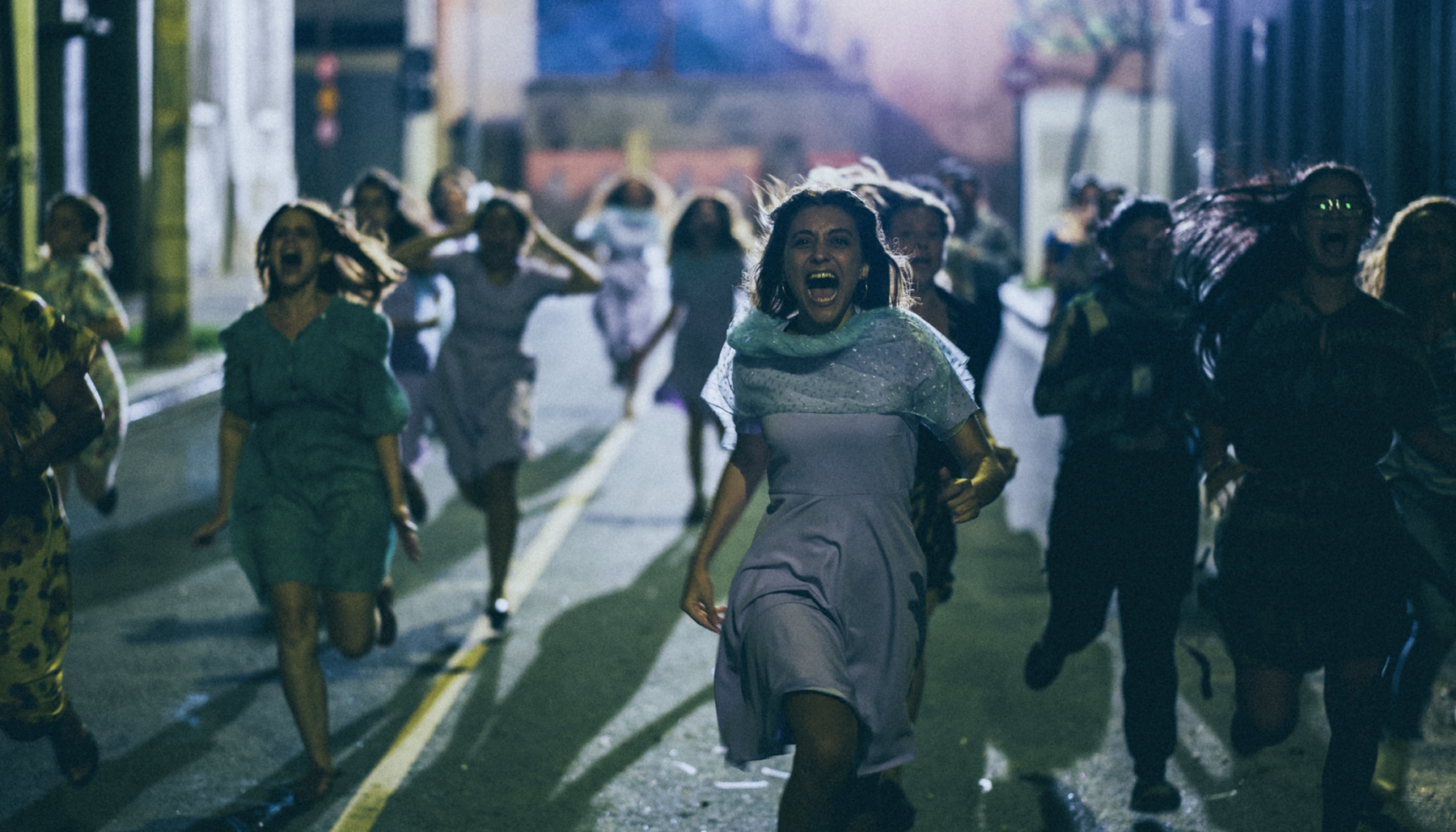 Meanwhile, Brazilian writer/director Anita Rocha da Silveira doesn’t wait to get your full attention in her sophomore feature MEDUSA. The pulpy supernatural satire opens with a girl bent unnaturally backwards gyrating to 80’s electro pop doused in lurid neon light. It’s a shocking sight that also feels creepily foreboding. Indeed something nasty happens right away, as we witness a group of masked school girls brutalize a young woman in the streets, calling her a “homewrecker” and “sinful slut”.

Later we learn that this group of nine girls go to an ultra-religious school and take it upon themselves to restore Christian values in society by seeking out and punishing “morally loose” women. During one of their nightly missions, one of the girls gets scarred in the face and becomes obsessed with the legend of an actress whose face was set on fire before her disappearance. She gets hired at a hospital for coma patients in the hope of finding the missing actress, and spooky things start to happen.

As the synopsis would suggest, MEDUSA covers a lot of ground from different genres. There’s quite a bit of satiric humor, like the tutorial on how to take the perfect Christian selfie which I really enjoyed. As it progresses, the film crosses over into horror territory, focusing on ghosts and urban legends, until it reaches a high-pitched end note of sheer desperation. I’m not entirely sure the mix of themes and tones serves the film well, but there’s no denying that da Silveira is a thoughtful, socially-minded filmmaker with great stylistic instincts. Apart from the memorably expressive opening shot, scenes at the hospital with the eerily serene atmosphere and dilapidated set design are also very effective.

Films don’t have to be about politics to be political. In these two cases, the filmmakers tell pretty fantastical tales that, at their core, illustrate the built-in sexism of religious societies. And that’s as real as politics get.