"A lot of Tim's characters this season, he's not really trying to be a jerk."

Awards Daily chats with I Think You Should Leave Season 2 music supervisor Andrew Gross about how his (and probably your!) favorite sketches ended up with those songs.

Season 2 of ITYSL turns it up a notch (way up—like turning up the Blues Brothers!) and music supervisor Andrew Gross offers some insight into his favorite sketches.

The end of the first episode concludes with “Ghost Tour,” a skit involving a foul-mouthed attendee (naturally Robinson) on an adult ghost tour, which ends with a character reveal and a ’50s Christian song. Gross credits Robinson and Kanin for this very specific song choice, which came as early as the script-stage. Knowing where to go to for vintage Christian songs, Gross sent them a batch of possibilities before they settled on “Jesus I Come.”

“They could have used something more upbeat, but instead, they chose to use this Christian ballad, because of [the character’s] Christian mother, which made that whole thing real. When I saw how they used it at the end, it was just perfect.”

The second season is a bit more reflective than the first, with some substance behind the insanity of Robinson’s characters.

“A lot of Tim’s characters this season, he’s not really trying to be a jerk,” says Gross. “He’s just wanting to get clarity or things have to be a certain way. ‘It’s lunch. You can’t call a meeting at lunch!’ [referencing the opening sketch of Season 2] I love that because I think we can connect now even more with him this season than last season.”

At a baby shower with a crying baby, Robinson’s character looks back at how he used to be “a piece of shit” via a montage set over Sloppy Steak Mafia (featuring Vampire Weekend’s Ezra Koenig) “Dangerous Knife.”

“Akiva Schaffer [executive producer] wanted a song for it, and I think Akiva knows Ezra and called him up and Ezra was totally available and into collaborating with Tim and Zach to do a lot of the lyrics. They do all the lyrics for the original songs in the show. They normally write them with Greg Chun, but in this case they wrote it with Ezra. When I first saw it come in, it was done. This song checks all the boxes that the scene really needed. It’s a flashback, so it has this fun, light electric piano opening to bring you into the flashback and then it’s ultimately this EDM kind of ballad, very electronic. And yet it’s got this emotional seriousness and weight to it.” 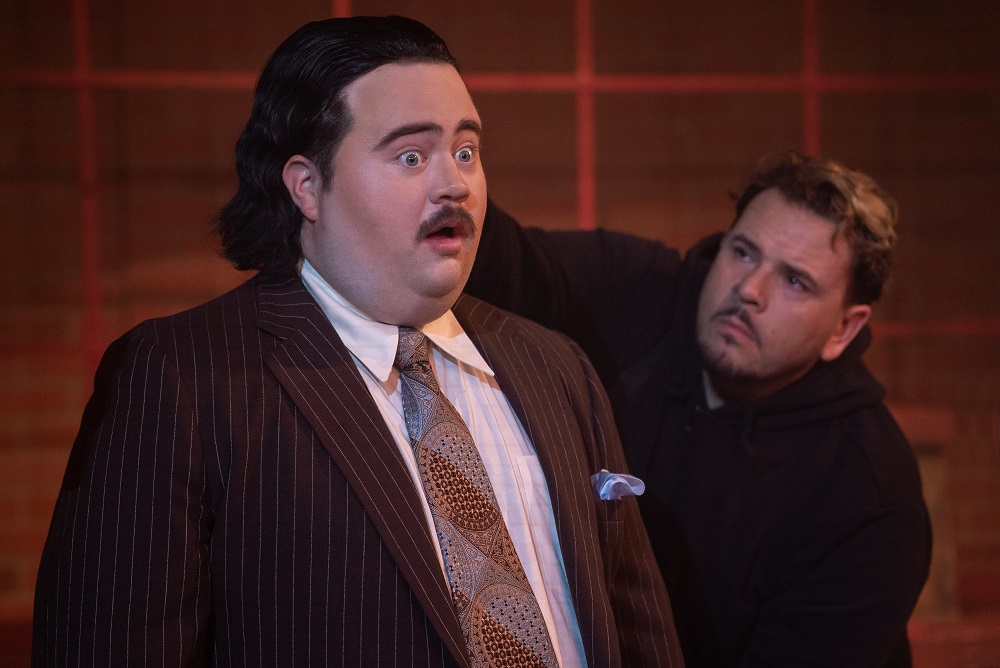 Paul Walter Hauser pops up on the series in the “Wife Joke” sketch, where over a game of poker, he makes a joke about his wife, only to feel guilty since she stuck by him through so many rough times, like when Jamie Taco was trying to take all of his henchman lines in the play he was in.

Over another montage, the show leans into romance, with song “First Light” by Dustin Tebbutt. Gross found the song using Spotify’s algorithms and juxtaposing it against the sketch for Robinson and Kanin.

“When they first sent me a rough cut of it, I was so excited, because again, this was a bit of a departure. It starts out silly with a bunch of dudes cracking wife jokes, in this misogynistic way. And Paul Walter Hauser—he’s so good in it—has this turn where he cracks this joke and immediately feels bad. It turns into a testament to the love for his wife, who’s been with him the whole time. It totally changes gears. I understood their sensibility and what they wanted from that, and from there, I knew what the song needed to be. It had to be a male singer, as if he’s singing to his wife. And then it needed to have dynamics, so the scene could have a nice arc to it.”

Not only is ITYSL giving an SNL alum’s underrated sense of comedy a boost, but it’s also highlighting underdog musical artists.

“That’s one of the more fun things to do. Even in Season 1, the label Fervor Records that licensed us all of the vintage music for the main titles, I heard that their Spotify numbers went up because there was chatter. ‘What is that title? What is that theme song?'”

Season 2 of I Think You Should Leave is streaming on Netflix.

Taking a Deeper Look at the 2021 Emmy Nominations