What looks to be a powerhouse performance by Jodie Comer (hello Best Actress) and another Gladiator-like flick from Sir Ridley, the Last Duel’s trailer dropped today. It is the kind of movie that will benefit from theaters being opened, which I hope they are. This is one that requires a dark room and a big screen.

The Oscar bloggers are, so far, putting their chips behind Sir Ridley’s other movie coming out this year, House of Gucci. So it’s Sir Ridley and Adam Driver doing two films together in one year. That is a little strange, no? Matt Damon is also doing double duty this year with two strong performances heading straight for the Oscar race – the first being in Stillwater and now, in the Last Duel.

And, of course, one would be remiss not to mention the reunion of Damon with Ben Affleck.

Here is the plot: In 14th-century France, Marguerite de Thibouville claims she’s been raped by her husband’s best friend. Her husband, knight Jean de Carrouges challenges his friend and squire Jacques Le Gris, to trial by combat. It is the last legally sanctioned duel in France’s history.

We’re kicking it all the way back to 1386 for this story. Digging deeper into it is Eric Jager from Lamphams Quarterly:

On a freezing December day in 1386, at an old priory in Paris that today is a museum of science and technology—a temple of human reason—an eager crowd of thousands gathered to watch two knights fight a duel to the death with lance and sword and dagger. A beautiful young noblewoman, dressed all in black and exposed to the crowd’s stares, anxiously awaited the outcome. The trial by combat would decide whether she had told the truth—and thus whether she would live or die. Like today, sexual assault and rape often went unpunished and even unreported in the Middle Ages. But a public accusation of rape, at the time a capital offense and often a cause for scandalous rumors endangering the honor of those involved, could have grave consequences for both accuser and accused, especially among the nobility.

The challenge did not lead directly to a duel, however, but marked the start of a formal investigation by the Parlement, which would authorize a duel only if unable to reach a verdict on the basis of the available evidence. Over the next several months, famous lawyers were hired, witnesses were summoned, and testimony was gathered. Marguerite herself—now pregnant, perhaps as a result of the rape—came to Paris and testified in great detail about the alleged attack by Le Gris and his accomplice. “I fought him so desperately,” she claimed, “that he shouted to Louvel to come back and help him. They pinned me down and stuffed a capucium [a hood] over my mouth to silence me. I thought I was going to suffocate, and soon I couldn’t fight them anymore. Le Gris raped me.”

Le Gris countered with a detailed alibi for not just the day in question but the entire week, calling numerous witnesses to establish his whereabouts in or near another town some twenty-five miles away. Le Gris’ attorney, the highly respected Jean Le Coq, kept notes in Latin that still survive, allowing us a glimpse into attorney-client discussions. Le Coq seems to have had some doubts about his client’s truthfulness, while admitting that this was the thorniest of “he said, she said” cases. Despite the lady’s many oaths, and those of the squire, he confided to his journal, “No one really knew the truth of the matter.”

The Parlement ultimately failed to reach a verdict, and in September it officially ordered a trial by combat, where—in theory—God would assure a just outcome. If Carrouges won the duel, the couple would go free, their claims vindicated. But if Marguerite’s husband and champion lost, thus “proving” her accusation to be false, she too would be put to death. And not just any death. In accord with ancient tradition, she would be burned alive as a false accuser.

By now the case had become a cause célèbre. The entire royal court was gossiping about the rape, the trial, and the likelihood of a duel. Beyond the court the dispute was being spoken of “as far as the most distant parts of the kingdom,” according to the chronicler Jean Frois­sart. News back then traveled, archival research has shown, at the rate of an average day’s journey by horseback: about thirty miles per day. Word of the scandalous affair spread far and wide via merchants, soldiers, itinerant clergy, and others who carried the latest tidings along the rutted roads to far-flung towns and villages.

The rest of the story is a bit of a spoiler, but if you are curious you can read it over at LQ.

I have high hopes. It looks very very interesting. It will be released right in the sweet spot of Oscar season, October, 2021. 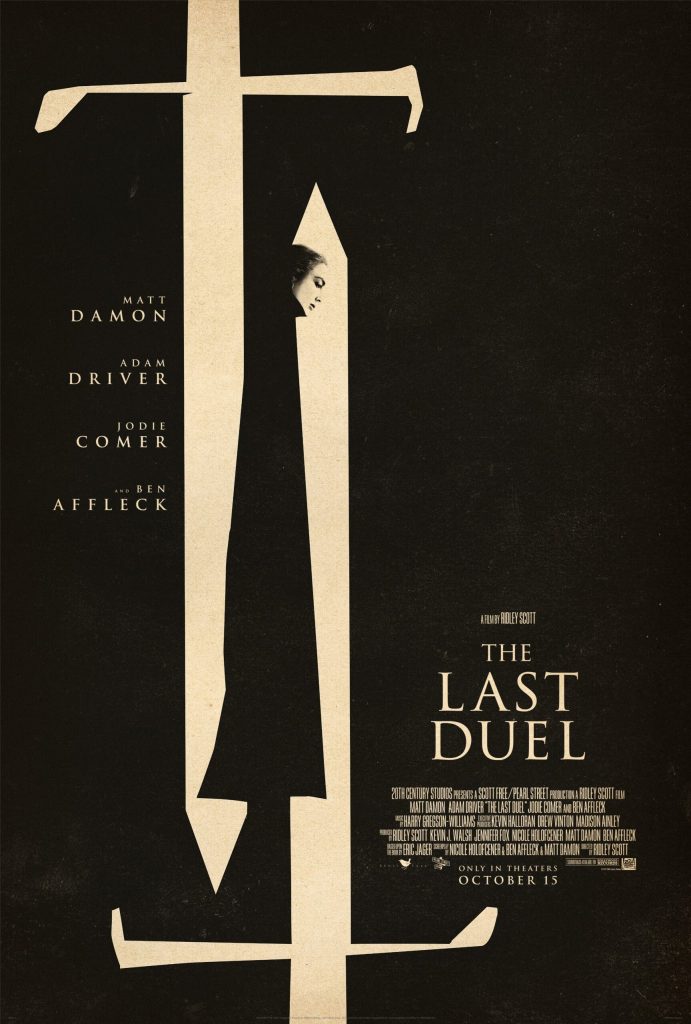