The Oscar race, as we’ve come to know it by now, is about to get its ingredients together on the counter and ready to bake the cake that will be whatever this year’s Oscar Story will be. We know that Andrew Dominik’s Blonde and David O. Russell’s Canterbury Glass are out of this year’s Oscar race. That is what we’ve heard. Venice has announced its lineup with Dune, The Power of the Dog, The Card Counter, The Last Duel, Last Night in Soho, and Spencer, and a few titles have been kicking around for Telluride like Mike Mills’ C’Mon, C’Mon.

As Hollywood has gotten bigger, brandier, the Oscars have gotten smaller and less “local.” Meaning, a lot of what the Oscar voters like are naturally going to be movies made not just outside the system but perhaps even outside the country. After all, anyone who watches the selections for International Feature every year comes away a little amazed at how rich the storytelling can be from almost everywhere else. America is going through a bit of a creative crisis at the moment, both in terms of its generic popcorn films, and in terms of its climate of fear around offending or upsetting anyone and the ways art has become weaponized.

Here are a few things to think about as we head into the next phase:

There Won’t be a Golden Globes

The Golden Globes not happening this year remains a major downer. A movie like House of Gucci is just made for the Golden Globes. And without them, we have Film Twitter, which is no substitute. The Globes were the only group not plugged into the insular feedback loop of Film Twitter, Rotten Tomatoes, and the Critics Awards. Everyone loved to hate them. No one took them all that seriously. They were the best publicity vehicle for any contender. It required a lot of schmoozing to get in the door, no doubt, and they apparently exhibited favoritism to studios and celebrities. They’ve been charged and found guilty of racism. And were sentenced to a canceled telecast and nonstop shaming in the press and on social media. Maybe this scolding and their subsequent actions will change things for them and for Hollywood. That depends on what you mean by change.  What the activist community that now dominates every corner of Hollywood actually wants isn’t a competition at all. Because competition is too risky of an outcome. Unfortunately, removing the Globes will make the awards race, I figure, way too safe and predictable. Way too insular. But I’ll keep an open mind and watch how the season plays out.

Don’t Count Out In the Heights

Anne Thompson has at last dropped her first Best Picture predictions column. Thompson is always worth a read and is smarter than most when it comes to predictions, especially since she doesn’t actually predict movies she has not yet seen. Here, she has listed her main contenders, those she’s keeping an eye on as the season unfolds. In her column she writes:

Certainly, Thompson would know better than me and perhaps I am too optimistic but I don’t think box office matters at all anymore. Sure, it would have been great if people came out in droves to see the movie. But you aren’t going to find many by year’s end that look like this: 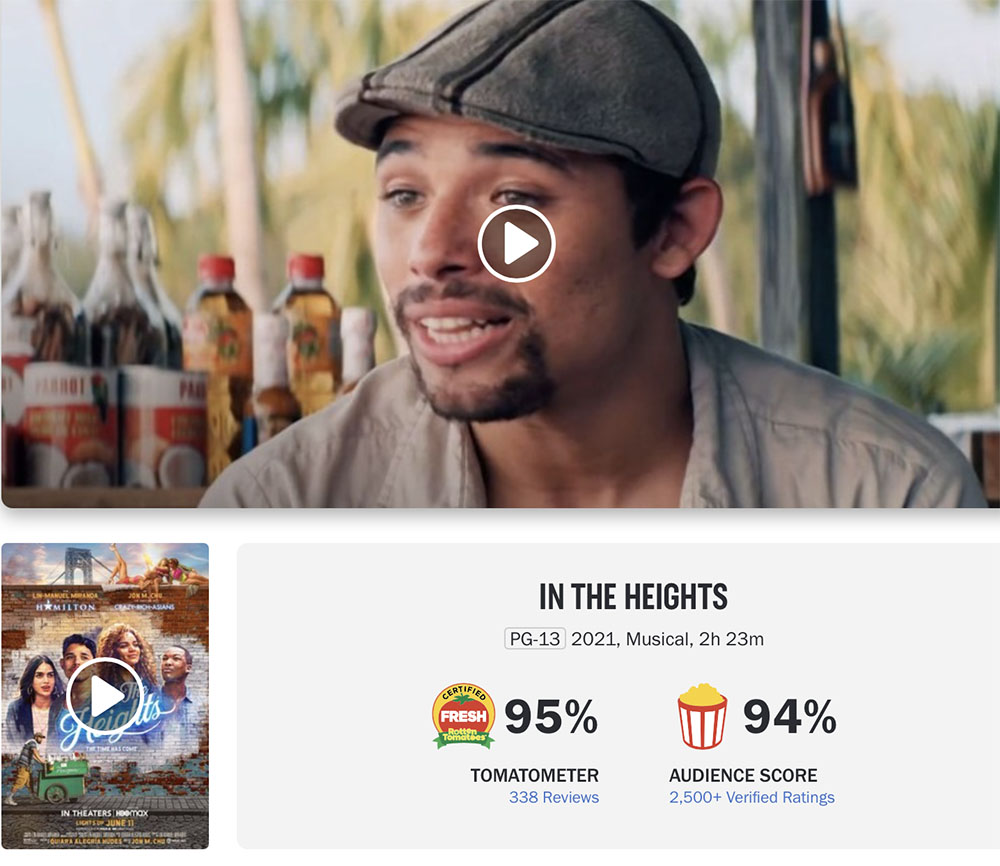 I think the way Miranda has been treated works in his favor in an industry that truly wants to stick its middle finger up to “cancel culture” that forced him to apologize but they can’t. Their votes might prove that they want to send a message that they support this movie. I think what matters more than whether or not it made money — COVID has put a wrench in the works across the board when it comes to box office — the better question to ask is what people thought about it. Did it move them?

Moreover, we have TEN slots now. Not a shifting indefinite number between 5 and 10. It seems to me an easy call to see this film as a contender. Critics and bloggers might be moving on to Tick … Tick … Boom! But all this movie needs is roughly 100 people to call it a number one to get on the ballot. That does not seem like a heavy lift. So I’m keeping it on my list. It’s always better to go with what you know than what you don’t know.

Here is her full list of what she calls “contenders.” Once she starts seeing the films they will go in the “Frontrunners” area.

Interestingly, Anne does have predictions so far of the films she HAS seen over at Gold Derby and those are:

Passing and The French Dispatch makes her list but aren’t listed as “frontrunners” even though she has seen them. Coda and Stillwater make her longshots list.

So you can see there is a slight disconnect in which films they feel most strongly about. They agree on those in bold. And if we’d seen all of the movies already and these were actual predictions, those would likely be your strongest contenders:

Otherwise, some films show up on Erik’s “Other contenders” that are on Anne’s list, like Passing, Respect, Don’t Look Up. Belfast is the only film that comes up on Erik’s list of Anne’s “longshot” contenders.

It seems like there are a lot of possibilities to be had. What Film Twitter will be to look for, and anyone who watches the Oscars from an activist’s lens, is which films are directed by women and which films are directed by people of color, men or women. Which films are about a white cast and white characters, which films aren’t. That will be the method many Oscar pundits use while approaching their predictions. And of course, our predictions really do help shape and define the race, give or take a Bohemian Rhapsody. (That movie, by the way, probably would never have made it into the race without the HFPA).

Jane Campion directed The Power of the Dog. Otherwise, all of the titles in bold are directed by men. I see Anne Thompson has Respect in her lineup, which is directed by South African-American Liesl Tommy, and Erik has King Richard by Reinaldo Marcus Green, a Black  director, and of course, Guillermo del Toro is the mind behind Nightmare Alley.

Passing and CODA are both directed by women.

Speaking of Gold Derby, they put a bunch of new predictions up by experts.

Now I will list the films many at Gold Derby have for WINNING the whole game:

We are all making predictions sight unseen on a season that has yet to unfold. I put in my predictions over at Gold Derby and this is what I put down for now, but take it with a huge grain of salt.

My rules are that I start with the top five I think would get in if there were just five, what I call the DGA Five. What five films are most likely to get a DGA nod.

Adapted Screenplay (it will likely to go to whatever wins Picture, unless Director does):
West Side Story
Nightmare Alley
The Power of the Dog
House of Gucci
Coda

I felt absolutely ridiculous putting these down because they are going to be so so wrong. I really only have gut instincts about some titles but no actual intel. Take it for what you will. Venice, Telluride and Toronto will be where most of these films have their coming-out parties and we will know in about a month whether they will fly or not.

Golden Globes in the Hot Seat: Is it Activism or McCarthyism?