In the wake of the Globes’ being canceled there was a Darwinian power grab to take their place. It was sort of shocking how quickly people turned the page, at least on Twitter, to decide that there was a chance for another award show to fill the void. The problem is that replacing the Globes isn’t just about the time frame for the awards or even the night they air. It’s really more about what the Globes represent. At the moment, there isn’t any other show that can replace their unique combination of traits that makes them watchable and influential.

The Broadcast Film Critics, most of whom dominate Film Twitter, have tried to position their awards show in the same place the Globes would ordinarily be. That might boost their ratings but more than that, they will have better access, better parties, better exclusivity. They might get a taste of what it’s like to be an HFPA member. They already are courted with high profile events, special screenings and swag. But without the Globes, there will be more headed their way, I imagine.  The problem is that the Globes aren’t critics. That is what makes them valuable. We have hundreds of film critics now ringing in on every movie released and an oversized amount of attention on the awards race. The critics and the bloggers already make the race. By contrast, the Globes were outsiders. They were mysterious, no doubt about it, and the least powerful of the awards institutions. But what they have is influence.

The other problem is that the Golden Globe awards were/are exclusive. They divide their film awards into Drama and Musical/Category categories but they also only focused on the major categories plus Animated Feature, Foreign Language, Song and Score. By contrast, the Critics Choice have six nominees for the major categories, and have multiple additional categories where nominees might get in, like Comedy and Action film, etc. That makes them the opposite of exclusive. If you follow Film Twitter you will be able to predict these awards almost to the letter. They will not abruptly shift the race the way the Globes often do.

Moreover, having a five-slot Screenplay and Director category means it’s a little bit easier to tell which films really do have strength heading into the bigger guild awards. It’s not always easy to tell. What the Critics Choice award will reflect the general sentiment of critics. Theirs will come on the heels of many critics awards and probably won’t look that different. The Globes, of course, had some influence from critics but they also sometimes just picked films that they liked that weren’t part of the awards race.

But the question as to whether the Critics Choice Awards will be as popular as the Globes telecast is a different story. For one thing, the Globes were going to be on NBC. Primetime on a major network. The Critics Choice will be on the CW. However, they will air live on the East Coast from 7 – 10pm, which means the winners will all be announced on Twitter before the show airs Pacific Time. The Oscars and the Globes are watched by both coasts at the same time, boosting their ratings.

The SAG Awards are the biggest of the televised shows that some have suggested might become more watched now that the Globes are out. But they too aren’t really the same thing since they only focus on actors. Their show hasn’t drawn the same ratings as the Oscars partly because they are on cable and not aired like a major live event the way the Oscars or the Globes are. Still, there might be some draw still left in them – especially without the Globes to showcase some of the stars. They have become, like other awards shows, overtly political and no doubt that has turned off viewers. But if they figure out how to make the show as fun as the Globes is they might have a shot. That assumes they are driven by the need for higher ratings. They might not be. The actors are in it for themselves, not the network. The Critics Choice, the Globes and the Oscars really do depend on ratings. The SAG Awards air on February 27th, 2022.

Finally, the Spirit Awards have now joined the mix and have, for the first time ever, pushed their date back to March 6th, way before the Oscars. There used to be a defiant separation between the Spirit Awards and the Oscars. They were the only show that illustrated just how little they cared about, but still offered an alternative to, the Oscars by scheduling them the day before the big night. That meant it didn’t have any sort of power to influence how the Oscars turned out. We used to joke that anyone who wins there had the “kiss of death” because they were that far away from the Oscars. Things were starting to change, even before COVID’s meteoric blast, so much so that last year’s Oscar winner – Nomadland – was easily the Spirit Award winner too. The differences weren’t even remarkable in the least bit, with Nomadland and Zhao taking Pic and Director. Carey Mulligan, however, triumphed over Frances McDormand in Best Actress and, since there was no Mank at the Spirits, Nomadland took cinematography too.

The Spirit Awards, like the Critics Choice Awards, like the SAG Awards, very much exist inside the bubble, or the progressive ideology of American left overall. That makes them more aligned. The Hollywood Foreign Press existed outside of that which made them unique. None of them can fit into this slot as it stands right now.

There is a reason the Globes have almost the same ratings as the Oscars do. They’re fun and funny and don’t take themselves too seriously. That’s why the public tunes in. The Oscars haven’t been fun in a while. Jimmy Kimmel tried to lighten things up but it just never really made them fun. And each host who tried to lighten the mood was savaged on Twitter. The constant criticisms of the Academy and the Oscars have left them in a state of having to be way too careful. Everyone is afraid of saying the wrong thing or making the wrong choice. By contrast, the Globes could get sloppy drunk and it was obvious people were having fun. One host in particular makes the Globe stand apart from the rest:

Why does Ricky Gervais taking the piss resonate so strongly? Because there is a growing backlash against not just Hollywood, not just awards shows, but celebrities themselves. Ricky Gervais is among the few people willing to go there. They can’t really cancel him by now, though they’ve tried. He just laughs back in their faces. Hollywood right now is frozen in fear. So for most people watching Gervais burn it down, the way people used to do before the Children Spies began policing behavior, speech and thought on Twitter, was pure heaven.

He turned out to be too much for Hollywood so he won’t be back to host. But the Oscars – they should beg him to host their telecast if they care about ratings. That would do the trick. Nothing would draw eyeballs more than Gervais dressing down the hypocrisy in Tinsel Town. Twitter would rage. There would be many a think piece. Perhaps some would threaten to boycott. But so what? The problems in the world and in this country are so much bigger than what makes Twitter mad. What we need is our sanity back and to get it back we need comedians as unafraid as Ricky Gervais.

Interest in the Oscars was already starting to decline. Right around 2015 the Oscars started to take a dive in the ratings. That was the year Spotlight beat The Revenant. Things began to slide more and more after that – even not counting last year. 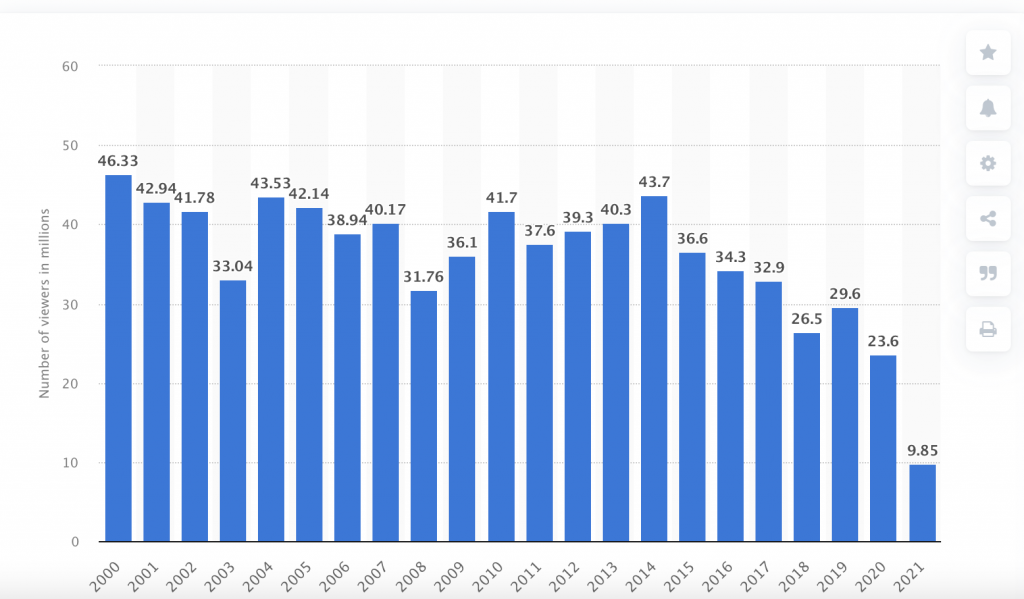 So how do they compare with other shows?

And here is how they all did last year, the COVID year of virtual ceremonies:

This is a bad year to lose the Golden Globes with so many high-profile musicals in play. The benefits of their show are many. They will be sorely missed, even if Twitter doesn’t think so. They’re wrong. No other group can replace them. So we’ll just have to have a year without the Globes and hope they return next year.

Here is the calendar: