The 78th Venice Film Festival can add another title to its list of hits with Paul Schrader’s dramatic thriller THE CARD COUNTER. It’s a film about trauma, forgiveness and the possibility to start over that is pure old-school storytelling. Gritty, no-frills and intensely character-driven, it’s genre filmmaking at its finest and most seductive. Catnip for cinephiles everywhere.

The film is told from the perspective of William “Tell” Tillich (Oscar Isaac), the titular card counter who learned the trick while serving over eight years in prison for something we learn later on. Tell seems like a solid guy. He sounds smart, patient, if also a little world-weary when he explains the different techniques to beat the house. He leads a solitary life, traveling from city to city to bet at different casinos. Fellow gambler La Linda (Tiffany Haddish) tries to persuade him to partner up and go big, but he stays solo despite an obvious attraction. One day, Tell meets an odd young man named Cirk (Tye Sheridan), who shares his tragic life story with Tell and proposes to kill someone that has ruined both their lives.

Schrader’s script is masterful. It’s that rare, mysterious tapestry of characters, plot and subtext so organically woven together you can’t imagine it wasn’t born fully-formed. With the perceptiveness of a true humanist and the inventiveness of a novelist, Schrader has created vivid, fascinating characters that really capture your imagination. And we’re not talking about outlandish figures with crazy quirks. We’re talking about seemingly ordinary people not too unlike you and me. People you notice on the bus or at the coffee shop who you just know have the most extraordinary stories to tell. This film is led by three such interesting characters and you can’t help wanting to find out more about them.

Well, what you’ll find ain’t pretty. (Mild spoilers ahead in this paragraph) It turns out that Tell (and Cirk’s father) both trained at Abu Ghraib under torture master Gordo (played by Willem Dafoe) and subjected inmates to the most horrific, dehumanizing treatment. When the scandal broke, the administration needed people to blame and put anyone dumb enough to be photographed in jail, including Tell. Cirk’s father was discharged and later killed himself. Those actually calling the shots like Gordo and his bosses were left off the hook. With nearly a decade in confinement and the new occupation of playing cards, Tell has finally found some semblance of peace, until the angry kid shows up and suddenly all the demons are back. 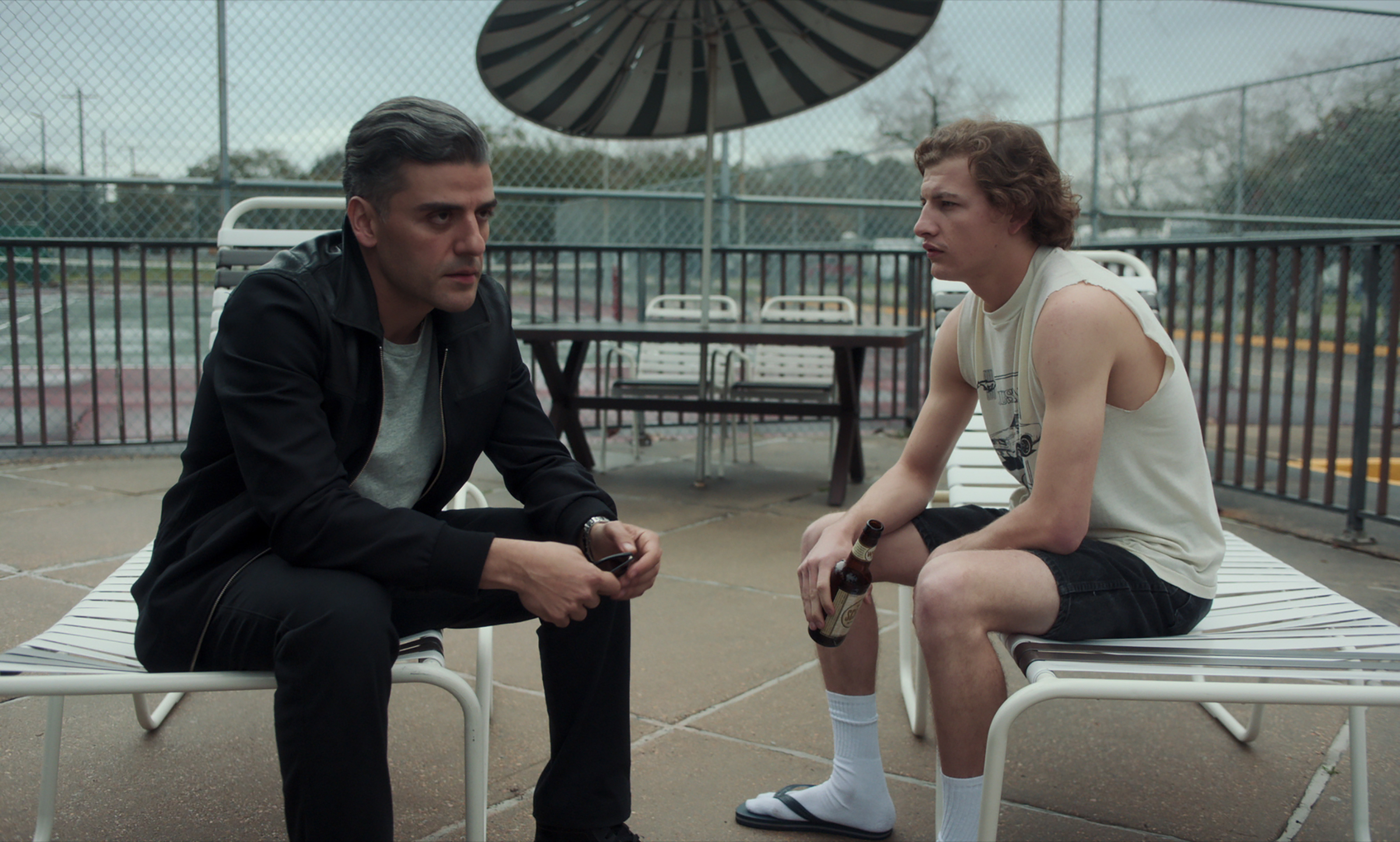 Although large parts of the film are scenes at card tables or the guys cruising around, a sense of foreboding sizzles throughout. The tension keeps building and reaches a high point in a scene around the last half-hour mark, when Tell sits Cirk down and tries to discourage him from vengeance one last time. It’s just two guys sitting in a motel room and talking, but the suggestion of violence is so pressing you can quite literally feel your pulse start to race. This is a testament to the power of Schrader’s writing, the economy of his direction, and of course also to the great performances from the actors.

Of the main cast, Haddish has the least to do, but she turns in a refreshing, wonderfully against-type performance – not in the sense that she gets all serious or weepy, but that she understands the appeal of someone like La Linda and applies her natural warmth and charm in a very different kind of way to play her. Although it’s a decidedly male-centric conflict at the heart of this film, her character represents the chance of salvation and gives the final act an added, essential tone of hope. Sheridan has established himself as a reliably great supporting player and did not disappoint as Cirk. After the fateful motel scene, something surprising happens to his character which we only hear about. And it speaks to the quality of his work that we can so readily picture him in the middle of the unseen event and feel struck by it even without the visuals.

Isaac is sensational in lead. To portray someone who’s been to hell and back, who’s been terrorized, dishonored, sold out and survived, he resorts not to rage but to calm. Just a wall of impenetrable, intimidating calm. But while Tell can go on for five minutes about probabilities and sound like the sanest person in the world, he makes sure you notice there’s something not quite right about this man. The cracks unmistakably show in an extended monologue where he recalls life at Abu Ghraib. And in the frightening motel scene, he really lets the Patrick Bateman-esque mania out and every word out of his mouth suddenly chills you to the bone. Great stuff.

Compared to a film as exquisitely crafted as THE POWER OF THE DOG, THE CARD COUNTER comes across as raw and unpolished. There’s nothing fancy about it. But what a kick I got out of this film. People who enjoy 70’s intelligent, bare-knuckled thrillers, watch out for this one.

'Cyrano' Revels in the Art of Love