Venice Dispatch – The Power of the Dog

I smell Oscars, guys. Well, let’s not get ahead of ourselves. Who am I to say what a group of ten thousand is going to do in six months’ time? But, however that turns out, we can at least all feel good about the Netflix subscription we’ve been paying for once, because New Zealand director Jane Campion’s THE POWER OF THE DOG, financed by the streamer, is a goddamn American masterpiece.

Adapted by Campion from Thomas Savage’s eponymous novel, the film is set on a ranch in 1920’s Montana. Owner of the ranch is George (Jesse Plemons), a somewhat unlikely cowboy for his chubby physique and mild manners. Most of the work on the ranch is done or overseen by George’s brother Phil (Benedict Cumberbatch), a rugged man’s man who sees the world through a set of deep-rooted convictions. The contrast between the brothers is apparent but they seem to get along fine. That is, until George falls for and marries Rose (Kirsten Dunst), a widow who runs the local diner. From the get-go, Phil does not like Rose (for reasons unknown but very much worth contemplating). And he thinks even less of Rose’s son Peter (Kodi Smit-McPhee), an awkward teenager who’s all limbs and rather short on machismo. When first Rose, then also Peter moves onto the ranch, the dynamics between the quartette turn increasingly toxic.

Even with my longstanding allergy of westerns, I found myself completely mesmerized and often awestruck by this film. To be fair, THE POWER OF THE DOG is a western only in a looser, more superficial sense. Campion borrows the familiar vistas and grandeur of the genre only to tell a decidedly intimate, all-American tragedy. The result is like a chamber piece that plays out on the most breathtaking stage, something quite extraordinary to witness.

Primary reason for this achievement is of course Campion’s astonishing directorial prowess. She is a creator of worlds. She knows how to instill a fully-formed sense of environment in the viewer that takes them to another place, a different mindset. The image of a piano stranded on the beach of New Zealand, so beautifully strange, so effective in its evocation of exile and isolation. Here she imagines the characters within the most sweeping landscape where each of them somehow feels diminished and trapped. Incredible vision, perfectly executed. 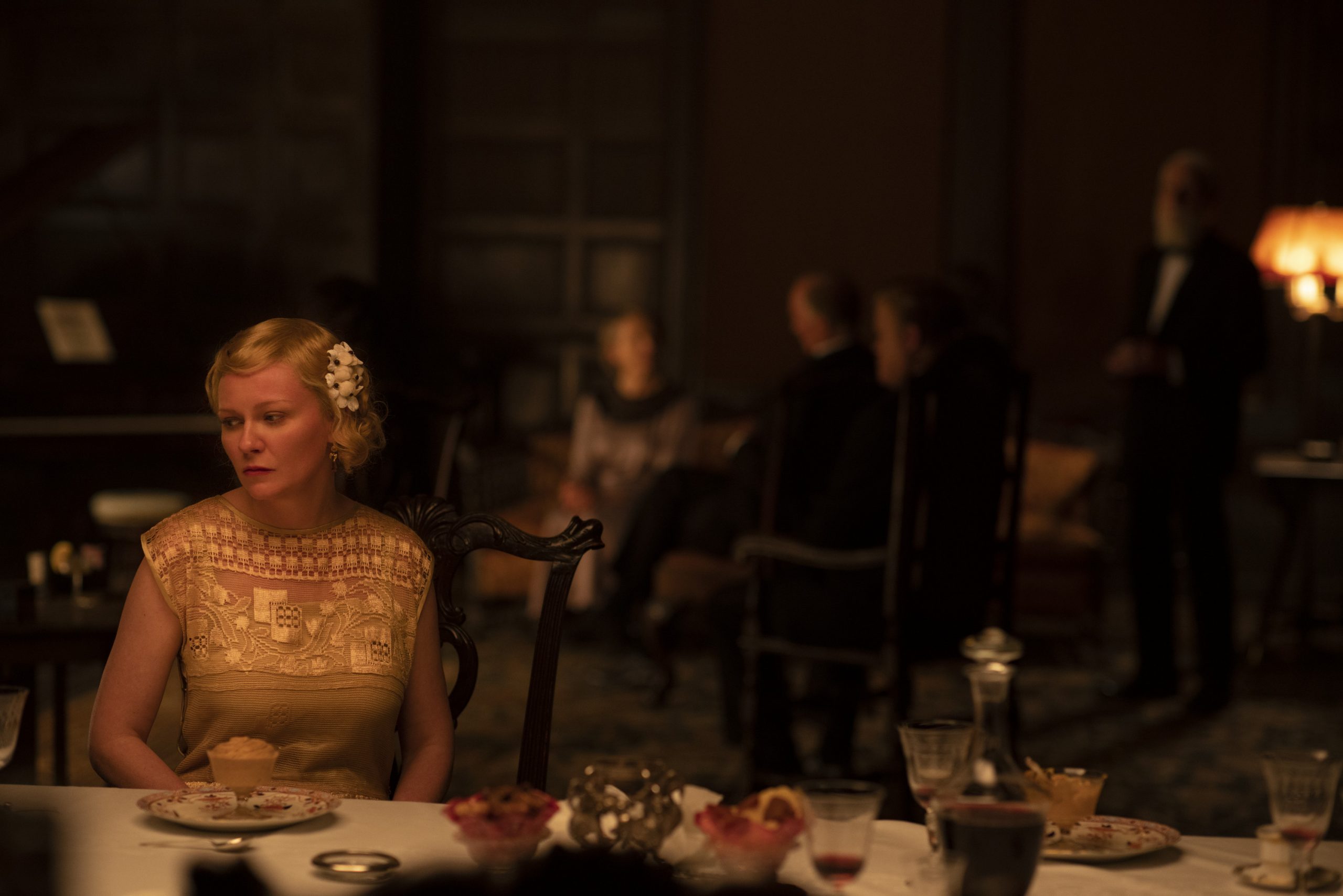 For that she has the support of a phenomenal technical team. First and foremost is cinematographer Ari Wegner. Wow. Simply sensational work from first frame to last. The exterior shots of this film will be some of the most gorgeous things to touch your eyeballs this year. That’s a guarantee. But it’s not just the heart-stopping views of the open land and endless sky that distinguish the cinematography. It’s also the sneaky, often uncomfortably angled shots that seem to catch the characters off guard and prove so revealing. Among the many exemplary scenes is one where Phil watches Rose drink from her hidden stash from above. Just the perspective and almost invasive closeness of the shot tell you so much about her pitiful state and his abusive nature. Another example is a scene near the end of the film that sees Peter and Phil wordlessly passing a cigarette to each other. The way it’s shot from a steep angle showing only Peter’s changing expression suggests a shift in power dynamics and growing sexual tension. All in all, superb, awards-worthy camerawork.

But also Grant Major’s production design and Kirsty Cameron’s costume design must be mentioned, for they too contribute substantially to the realization of this dazzling, claustrophobic world. And what about Jonny Greenwood’s score? I’m happy to report that fans can relax. The score is amazing. It’s not the crazy showstopper of the THERE WILL BE BLOOD score but it has a similar weird, disturbing vibe to it. There’s a lot of stripped-down, single-key piano music that brilliantly catches the raw nerves of the protagonists. It’s fair to say this singularly atmospheric film would not be what it is without the strikingly disharmonious notes of Greenwood.

Then we have the actors. All four members of the principal cast are excellent and excellently cast to complement one another. I don’t feel qualified to comment on Cumberbatch’s Midwest accent, but his performance is otherwise expertly calibrated and nuanced. Phil is a fascinating villain figure with layers to be uncovered and he gets both the menace and the mystery right. Dunst has arguably the showiest and most sympathetic part of the alcoholic wife/mom and she ran away with it. In the scene where Rose is caught drinking by Phil, it’s somewhat ambiguous whether she knows that he’s watching her, and Dunst makes sure to allow both possibilities through her carefully considered performance. I expect awards and nominations to come. Smit-McPhee’s character gets more and more interesting as the film goes on. The impact of the final act, especially, depends heavily on his transformation. And he delivered. A potential supporting actor contender. Plemons has the least showy part and he is gone from the screen for stretches of time, but the performance itself is solid, subtle, just as it should be.

For its sharp character observation, smart dissection of the cowboy mythology, redefinition of the western genre and overall immaculate technical achievements, I can’t quite imagine THE POWER OF THE DOG not being recognized by the jury in some way. Could Campion even become the first/only woman to win both the Golden Lion and the Palme d’Or? Would not be undeserved, this guy thinks.