I’ve been watching movies my whole life. When I was a kid, I was obsessed with Fred and Ginger musicals. I had no reason to connect with that material. A welfare kid from Topanga Canyon in the 1970s, but somehow they got through. All musicals did back then, but mostly theirs. It was such a profoundly transformative experience that I ended up taking tap dancing lessons and once dressed up as Fred Astaire when I was around ten years-old, my hair stuffed into a bowler hat. I wanted to slip into that world where people could just suddenly start singing and dancing. This was one of my favorite dance numbers:

I guess it looks kind of silly now, all of these years later. But as a kid I was completely sold on the whole thing. I could not get enough of it. I loved her outfit. I loved that she could keep pace with Astaire, even though he was the best.

I was responding to the great songwriting I just didn’t realize it. I was responding emotionally, not intellectually. And that, more than anything, is what musicals do for us. We need them. We just don’t realize how much. I was being pulled out of my own misery much the way audiences were in the 1930s during the Depression I just didn’t know it then. I know it now.

A lot of them simply took the place of sex because sex could not yet be expressed. The sensuality on display, the movements – much of it was suggestive. In the best way.

There are times when musicals resonate better than others because we’re living through some kind of oppression. The songs allow for secret or hidden feelings to emerge. We’ve lived through eras when hardly anyone seemed to like or watch musicals. We’ve seen great ones and terrible ones.

The musicals I’ve seen this year – In the Heights, Cyrano, and Dear Evan Hansen – are full-throated, unabashed, wildly expressive musicals where the actors commit themselves fully to the material. If they can do that — if they can pour their hearts out, sing and give it everything they have — are you really going to meet that with your arms folded and your heart closed? I could, I suppose. I could judge every second, scrutinize every shot, every decision, whine and complain about how they aren’t good enough — or I can check my cynicism at the door and just stop thinking.

I guess the big crime in Dear Evan Hansen is that Ben Platt in his late 20s plays a high school kid. He certainly looks like an adult, there is no denying that. But so? You’re watching a film that meant a lot more to him than just a simple casting choice. He workshopped it for years. He won a slew of awards for it. Had someone else starred in the film adaptation, no doubt everyone would be saying, “Ben Platt did it so much better.” Trust me, they’ve been saying that about certain film versions of stage musicals for years, where the original Broadway performer was so much better and how terrible it was that they sold out and put a movie star in that role.

Most people who buy a ticket to watch Dear Evan Hansen are going to walk away from that movie richer than when they came in. There is something that happens to us when we hear singing and music that is different from just listening to conversations. It is an experience you can allow for yourself even if it makes you feel a little silly.

I went into Dear Evan Hansen expecting the worst because that is what the internet told me. But you know, it is not easy to resist these songs and the ideas behind this movie. It certainly gave back more than it asked.

And that is the function of movies, especially movie musicals, especially in the worst of times.  True, you might be disappointed or annoyed by the casting of Platt — but you might not care that much. You might be swept up in it, as I was, wanting the story to take me somewhere good, wanting the story to lift me up out of the swamp of despair. I’m glad I got the chance to see Platt do the role he was famous for. In the wake of COVID, empty theaters, movies put on hold, an industry crashing and burning before our eyes, I’ll take it. I’ll take the sincerity and sappy songs, the awkward moments. Not all of it “worked,” but in the end, this was a film made from the heart.

Now I know this isn’t the job of critics. I know it isn’t their directive to be nice, or to go soft on movies, or to have any compassion whatsoever to people who put their heart and soul into something, months and months of their time, taking a risk no one sitting behind a keyboard ever would. It is their job to watch something and write honestly about it. But I can tell you with 100% certainty that there is no way Dear Evan Hansen deserves this kind of a score: 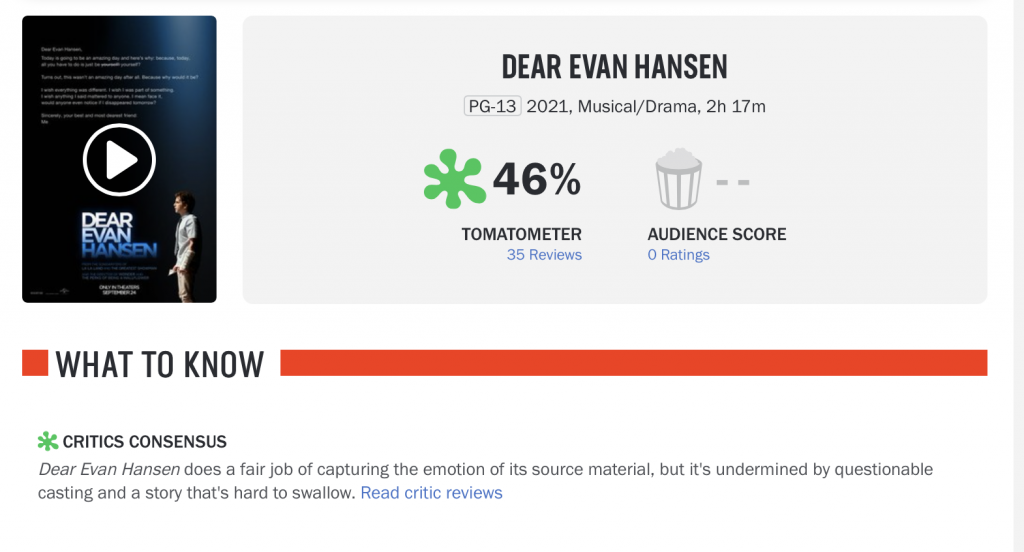 I can promise you that the audience score is going to be much higher than this. These examples continue to come up where the audiences like the movie and the critics don’t. The problem isn’t the critics, particularly. Clearly audiences are watching movies regardless of the critics. The problem is, I think, when the hive mind that is much of what defines criticism as it feeds off of and back into Twitter, can sometimes make works of art a scapegoat for misplaced rage. Usually, if you dig into it, you can figure out what it was they took so personally, like Hillbilly Elegy being written by JD Vance. Here, Ben Platt was seen as someone they could sink their teeth into without feeling all that bad about it. And that is exactly what they did. Which is kind of ironic given the film’s anti-bullying message. Also ironic given that the film is about learning how to be yourself regardless of what people think of you.

Critics aren’t just writing about movies based on worth, after all. They have to write about them in terms of whether they succeed in depicting the utopian ideal all are apparently striving for. Did they commit any thought crimes? Was their casting 100% perfect? Did any of the women get kissed without consent? At some point we’re going to have to appoint some kind of higher clergy to pass judgment on whether the films succeed in not offending a single person – you know, a kind of MPAA that measures social cred?

Amy Adams has now starred in three movies in a row that the critics went after hardcore. Only one of those three deserved it, The Woman in the Window. But Hillbilly Elegy and now Dear Evan Hansen are not bad movies. They just aren’t Film Twitter-friendly. Adams is wonderful in this, as is Julianne Moore – two redheads playing the mothers. I heard some criticism that Adams doesn’t sing when she’s the singer but Julianne Moore does. And? Moore gives, I think, one of her best performances in this. And I can tell you as a single mom who raised a kid I could relate to her character.

I don’t think I watched any of these musicals this year — In the Heights, Cyrano, and Dear Evan Hansen — without seeing flaws. Moments that don’t quite work, elements that could have been smoother, an odd casting choice or two, a song that I mostly didn’t like.

Recently I watched the original West Side Story and that movie probably IS perfect. But audiences now would have a major problem with the casting of Natalie Wood, for instance, and no doubt other things in the film that would be seen as “problematic.” Does that make it less than perfect? No, it doesn’t. It is still perfect. And it deserved all its Oscar wins. But might it mean that audiences at this particular point in our history might not appreciate it? Maybe. Time decides the worth of films because it can discard the tastes of the moment.

That’s the message of Ang Lee’s sublime Life of Pi. It tells one version of the story, an imaginative unbelievable one. Then it tells the other version, the more realistic one. Then you are given a choice — which do you prefer? That is how the film explains faith: “And so it goes with God.” Today on the phone my daughter told me that she tries not to think about her mortality (at 23). I told her, because I’m probably not going to be around when she is confronting it, that it does her no good to approach life and death as an atheist who knows there is no afterlife and thinks when we die that’s it. It serves her better to imagine there is such a place as Heaven. It costs her nothing to believe. And believe she must. Even if she has to force herself. It’s the better story, after all.

And so it goes with musicals.