Anyone paying more objective attention, however, knew Nomadland had it in the bag as early as its debut in Venice. This was due to what happened in 2020, in the post #MeToo, Black Lives Matter, and Times Up era that had Hollywood upending itself to revolutionize what was already a progressive and inclusive awards industry. If you’ve been watching the Oscar race long enough, you know about the “just waiting for” dynamic. And Nomadland’s win was a “just waiting for” scenario playing out.

If you pay close attention and if you listen hard enough, you can sense when there is a “right time, right place” environment for an overdue winner to come in for a landing. In the case of Nomadland, it was more or less “just waiting for a woman of color to make a movie that could win.”  Probably that sounds crass. It’s not really that simple and no one would admit it anyway, just as they would not admit that’s why they awarded Julianne Moore or Martin Scorsese or any other “just waiting for” scenario. It all contributes to the enthusiasm that it takes to push a winner. The film also has to be good enough and Nomadland was.

But in general, with or without a “just waiting for” scenario, Best Actor ordinarily drives the Best Picture race. Last year’s winner was attached to a Best Actress win — a scenario that hadn’t played out since 2004 with Million Dollar Baby.

So why do men have the edge, or Best Actor or male-driven stories?

Some will say that simple math decides this. Despite efforts to showcase their inclusion and diversity, the industry — along with Big Corporate and Big Money — is driven by men. White men. The numbers still back this up by a fairly large margin. I think the Academy is around 70% male right now, 30% female. This was true in 2019. Maybe it has shifted a little bit. People of color are around 16%.

Goodness is what measures worth and has since the 1990s as the Bill Clinton era ended and a new one began roughly around the year 2000. That was when the Left more or less became the side that values virtue and goodness in the way the Conservatives did prior to the Clinton era. Remember, they were shocked and horrified by Clinton’s sexual behavior. The Left was not. Now, it’s flipped as Trump and his movement came to be recognized as the side that does not care about being good or looking good and isn’t all that concerned about the strict rules of behavior, past, present or future. They represent what the Left used to represent — the Devil-May-Care attitude of being the “counter-culture.”

The Left is now the side that aspires to goodness and virtue at all costs, even at the cost of subversive art. It has become so strict and so strident that “bad” people are continually purged from the ranks. Scott Rudin is a recent example of someone did great work and never really committed any sort of crime but has just been shamed and ejected from the “shining city on the hill” of the new Left.

The Academy wants to still be seen as GOOD. They have to be seen that way to avoid being thought of as bad. At the same time, they are still who they are — a mostly white, mostly male voting body of roughly 10,000 members. Giving them the option of uniting behind Nomadland early was fairly easy for them to do. But it was harder when it came down to the wire and there was no consensus in the Best Actress race. They rejected the consensus around Chadwick Boseman in Best Actor, and in Best Actress they settled on the star of Nomadland, Frances McDormand. They are caught between doing what they want to do and doing what is expected of them.

If left to their own devices, the industry would default to the male protagonist’s story, and white male is less important than male. The reason for this, I’ve come to find, is twofold.

First, men are the default when it comes to likability. Men like men. Women like men. I can’t speak for non-binary folx. I assume they also like men. That isn’t really true about women in general. Women are competitive with each other and often hate each other irrationally.

The other reason is simply that men, especially white men, have more freedom to tell stories that women and POC do not have. For one thing, their history is simply longer. Men have been in charge for centuries. White men can play almost anything — good, bad, powerful, evil. The same is not true for any group that must represent a positive image or else face blowback. The list of requirements is strict and it is long. Not true of white men. I will always appreciate Denzel Washington’s willingness to buck this trend by playing complex characters as he did in Training Day and in Fences.

The truth is that people respond to stories that resonate with them, and most of the time the stories that resonate with them are stories that reflect back to them their own worldview. Since white people are the majority in the country (at least for now) and in the Academy, they are naturally going to gravitate towards those stories. They did expand a bit when they awarded Parasite, which is something to really praise them for. Of course, remember what I said above: in this town, and on the Left in general, the currency is goodness. It made them feel good to award Parasite because it made them look good. Had they not awarded Parasite, all of the acting winners and the Best Picture would have gone to white people. The headlines would have been a disaster for them. Instead, they got the good headlines and they bought themselves of another year of good PR.

We’ve done it before but let’s do it again. Let’s look at the past 50 years of Best Picture winners: 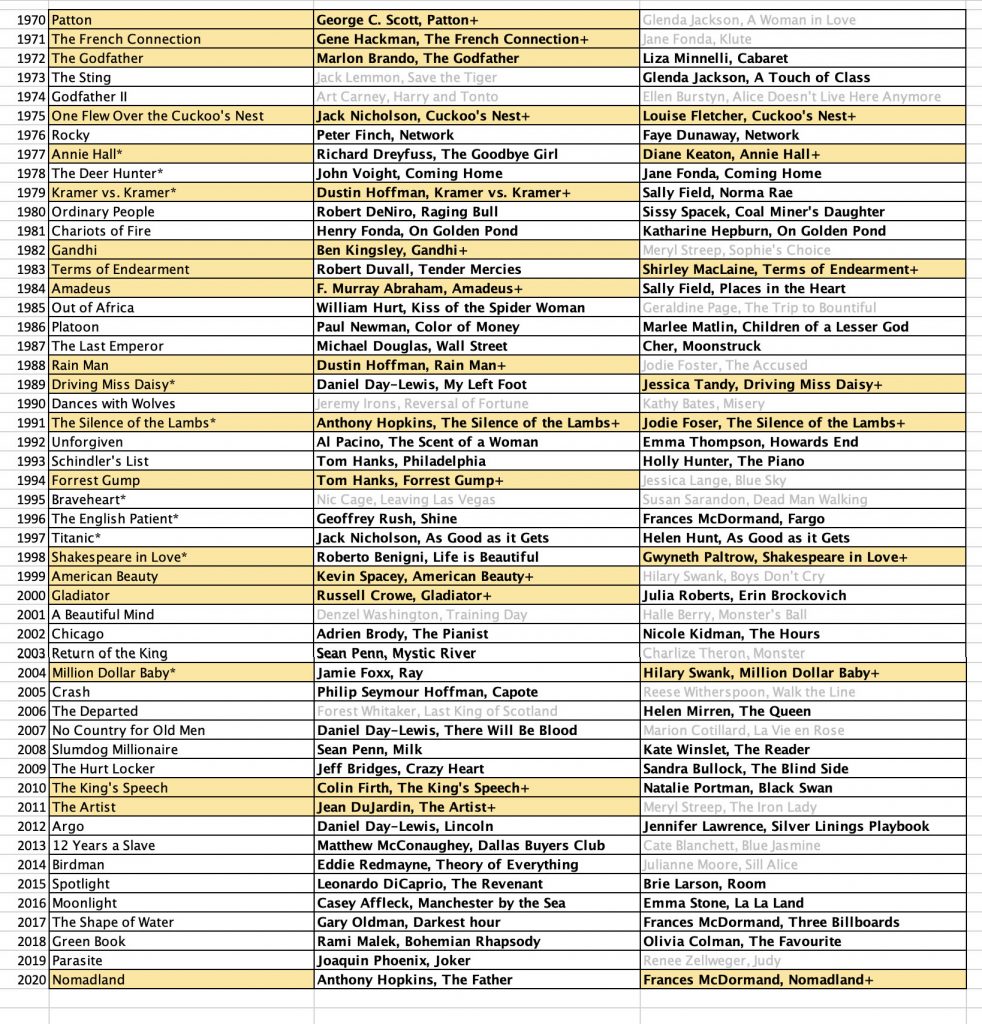 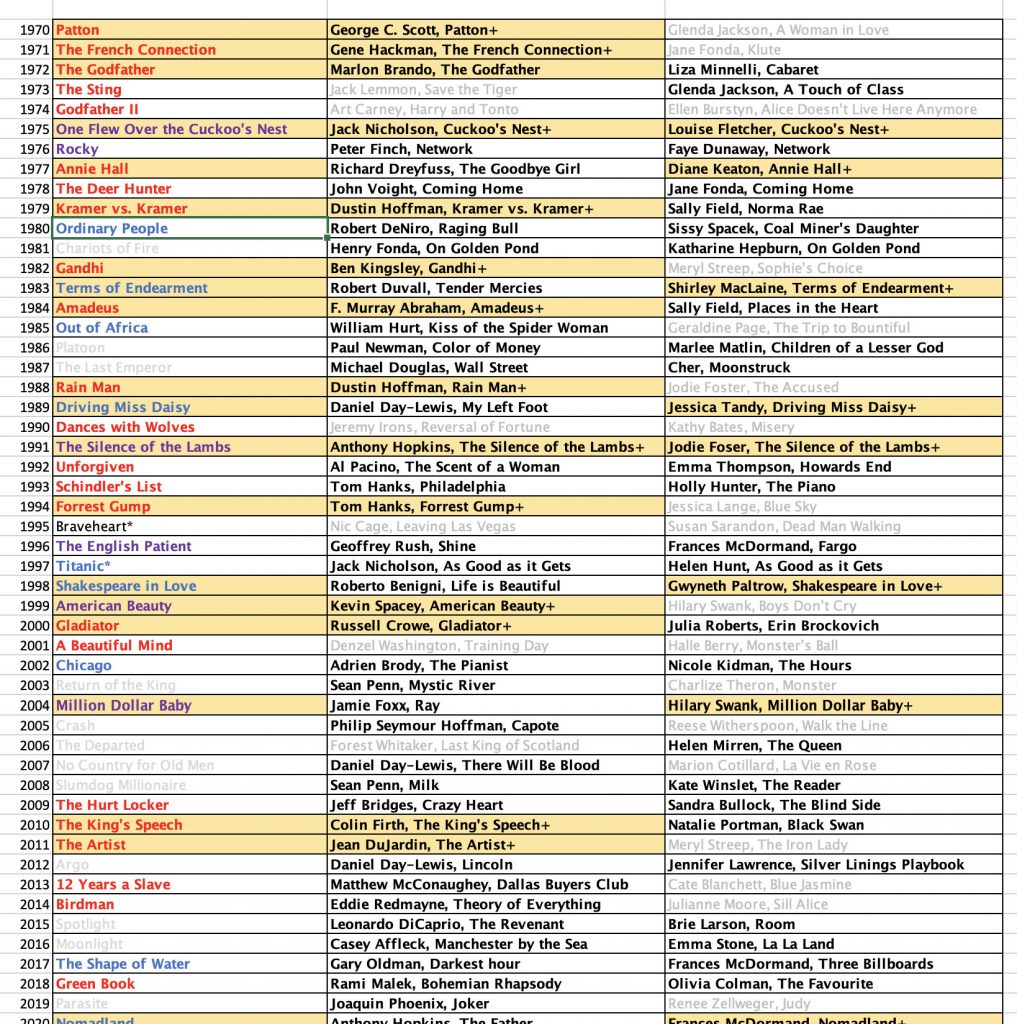 So obviously, Best Actor is more dominant than Best Actress when it comes to Best Picture. But it should be noted that having a strong Best Picture contender with a Best Actress nomination more often than not brings in a win for that actress.

Also interesting how it’s less likely under the expanded ballot for either Best Actor or Best Actress to go with Best Picture. I think that’s due to how voters prefer to spread the wealth now compared to concentrating it behind one contender.

So let’s get down to predictions. Taking a look over at Erik Anderson’s list for Best Actor for September he has:

I can’t really argue with his list. It looks solid to me.

Heading over to Gold Derby, they have the exact same five, with the order of Bradley Cooper and Peter Dinklage swapped.

It isn’t a deal-breaker, getting a Best Picture nomination for Best Actress but I think it’s still worth considering. For instance, those who think Spencer is going to bring in the win for Kristen Stewart – there’s a pretty good chance if it does that movie will also find a spot in the ten slots for Best Picture. I would not predict Kristen Stewart without also predicting Spencer. Jennifer Hudson could be an exception to that rule since she would be winning not just for her performance but to finally hand over another win to a black actress after only one being awarded in 94 years of Oscar history. Pundits are not thinking along these lines. They do not even see Hudson as a contender. But I do. I think she’s playing it stealthy right now because there is a lot of time still yet to go, but I think it will turn into a publicity juggernaut heading into the awards.

I could be wrong — I often am. But that is why I still have Hudson at number one and almost no one else does. If I was going to put Kristen Stewart or Jessica Chastain, I would have to add their movie to the Best Picture lineup because neither of them, I don’t think, can carry a win without it. Streep, Blanchett, Moore, and Zellweger were all beloved very overdue veterans. Stewart is not. Chastain isn’t quite there. This is just a theory of mine.

The reason I spent so much time above explaining the currency of being and looking “good” is to explain why I still have Jennifer Hudson in my number one spot. To me, Hudson is in the “just waiting for” position. I could be wrong. The pundits do not agree with me at all but it is my hunch at the moment.

In fact, Erik has dropped her off his chart.

Alright, with no further ado — here are my full predictions as of today.

For the supporting categories, it’s not always the case but it’s more often than not the case (especially in 2009 and 2010) that these winners are in a Best Picture contender. But over at Gold Derby most are not predicting Humans or Mass to get in for Best Picture. My predictions here in the top spot are for films I think will get nominated for Best Picture.

And the rest will have to wait for next week.

The State of the Race: Where We’ve Been, Where We’re Going

by David Phillips
6
No Result
View All Result