Middleburg, Virginia is a small, 18th-century town whose population of less than 700 boasts a pension for wineries, steeplechases, fox hunting, and film festivals. Steeped in antiquity, the picturesque settlement is a remembrance of the American Civil War, with manmade stone walls lining the winding streets into town like bunkers for those on opposite sides of the street. There are mom and pop candle shops and old-fashioned churches and libraries. One can’t help but be swept back in time here.

Hidden within the town is the headquarters of the film festival, the astonishingly lavish and luxurious Five-Star Salamander resort. The hotel overlooks 340-acres enclosed by the Blue Ridge Mountains and vineyards, and was established by Sheila Johnson, co-founder of BET and the Middleburg Film Festival.

The festival, now having completed its ninth year, ran four days (October 14-17). Executive Director Susan Koch and Head Programmer Connie White did an outstanding job curating a selection of 34 narrative and documentary films. Middleburg also holds a series of “Conversations” – themed panels with special guests providing insight on a variety of subjects. Some of the Conversations included Coffee and Contenders (a panel of Oscar pundits shared their thoughts on the current Awards race); Women in Film Music (a panel with four of the most talented women film composers and songwriters including 12-time Academy Award nominee Diane Warren); and a Conversation with Makeup Artist Donald Mowat (Dune). There were Tribute Conversations with Dakota Johnson (The Lost Daughter), Ann Dowd (Mass), and Kenneth Branagh (Belfast). These more intimate moments make Middleburg something special, and the gala has grown in popularity because of their efforts.

The Opening Night festivities kicked off with a delicious barbeque, prepared by local father and son chefs. The pair served up a delectable brisket and pork rib dinner, paired with local wines and Belvedere Vodka cocktails. Getting to eat anything at a film festival is a challenge, so it was greatly appreciated. 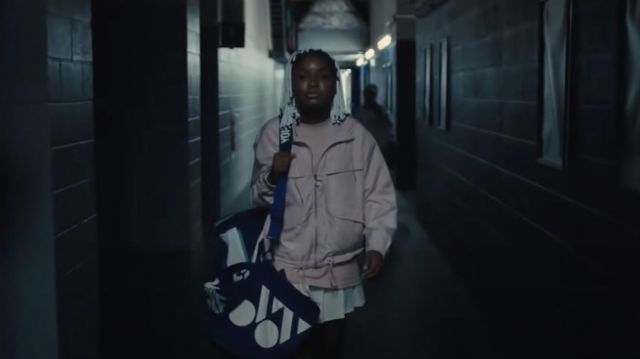 We followed the meal with the screening of Reinaldo Marcus Green’s King Richard. I saw the film back in Telluride (my thoughts here). King Richard played even better for me the second time around. In Telluride, my focus was mainly on Will Smith and his chances to win this year’s Oscar for Lead Actor. This go around I was able to appreciate the layers that the supporting cast brought to the film, most notably Aunjanue Ellis (Brandi Williams) and sensational young actress Saniyya Sidney (Venus Williams). Sidney deserves to be on any breakthrough performers list this year, and I can’t wait to see what the talented young lady does next.

On day two, I took in a screening of Rex Miller and Sam Pollard’s Citizen Ashe, a wholly inspirational film about tennis legend and activist Arthur Ashe. The film explored the usual themes of how black athletes were mistreated and how they had to defy odds that their white peers did not. What I found compelling about the film was how it focused on the narrative of how our lives are shaped by the events that take place around us. Ashe was not an activist by choice. He was stubborn about reaching that point. It was fascinating to watch how this compassionate giant reach his eventual and inevitable voice, one that lived by the creed that we should “disturb the comfortable and comfort the disturbed.”

Fans of Asghar Farhadi’s A Separation and The Salesman (both of which won the International Film Oscar) will likely enjoy the Iranian filmmaker’s latest effort, A Hero. Farhadi’s focus on the problems of the everyday man continue with Rahim, an irresponsible father on a two-day leave from prison. While out, he works to repay a debt that landed him behind bars. What feels like a simple narrative on the surface quickly becomes a much more complex satire about honesty and honor. A warning to us to use caution before celebrating stories circulated by social media. Farhadi’s work remains a bit inaccessible to me, despite the acclaim that most have for his canon.

I wrapped up the 2019 Telluride Film Festival with Céline Sciamma’s exquisite gem, Portrait of a Lady on Fire. While I was unable to fit her new movie, Petite Maman, into my Telluride schedule this year, I was very excited for the opportunity to catch up with it at Middleburg. Running at a brisk 72-minutes, Petite Maman is a touching look at how we handle the death of a loved one. A simple story, but a stirring one nonetheless, thanks in large part to cinematographer Claire Mathon’s camerawork.

I wrapped up day two with the film I was most excited to see at Middleburg, Joachim Trier’s The Worst Person in the World. The film was not at all what I was expecting, and for all the right reasons I loved that. Renate Reinsve stars as Julie, a young woman seeking true love. How she seeks love at the expense of others might be where we get the title of the film, but despite her unhinged ways, you can’t help but root for her. Part of that is in the magic of Trier and Eskil Vogt’s script, which is fraught with serendipitous chance meetings and examinations of mortality. How that script is executed by the cast, most notably Reinsve and Anders Danielsen Lie, is what really makes the film a truly memorable and touching experience.

Day three would be my final day at the festival, forgoing the final day to head home to attend my son’s first visit to First Energy Stadium, home of my beloved Cleveland Browns. Don’t ask how that played out.

Pedro Almodóvar’s Parallel Mothers was unveiled as the secret screening of the festival. I haven’t been the biggest fan of his work, but I was 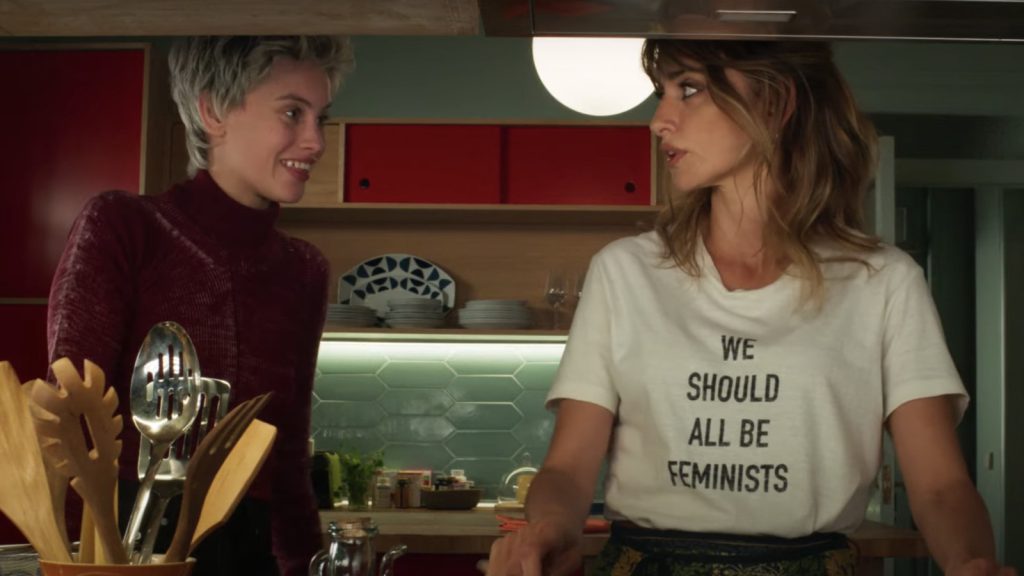 absolutely enthralled by his new film. Penelope Cruz won the Best Actress prize at Venice for what might be her career-best performance. She plays Janis, a single mother who begins to realize her child might have been swapped at birth. Newcomer Milena Smit plays the mother of the other child, wonderfully holding her own opposite Cruz. The pair are at contrasting ends of the spectrum in age, career, and maturity, but somehow make for a hypnotizing couple. While the mothers are intertwined in their own unraveling mysteries, Almodóvar doubles down with a history lesson of the Spanish war, and the connection of the two stories signifying the importance of lineage. Top-notch Almodóvar here, and an absolute must-see for his fans.

Stephen Karam adapted his stage play, The Humans, into a feature film starring Richard Jenkins, Beanie Feldstein, Steven Yeun, June Squibb, Amy Schumer, and Jayne Houdyshell. Set in an old decrepit Manhattan duplex, the dysfunctional Blake family gathers to enjoy Thanksgiving together. What starts as a family drama fades into a psychological thriller with the setting of the sun. Frivolous conversation turns to the family’s darkest secrets being revealed. The lack of working lights and claustrophobic shrinking walls adds eerie to the unexpected. The entire cast is exceptional, but most awards talk will focus on Richard Jenkins, the patriarch of the family. He is outstanding as always and worthy of Oscar consideration. Schumer gets the best lines and plays the comic relief role naturally. It’s Houdyshell, however, that wins best in show for me as the mother who bears most of the brunt of her fractious family.

Rebecca Hall’s directorial debut, Passing, is driven by two outstanding turns from Tessa Thompson and Ruth Negga. While the script might be too soft around the edges for its story, the performances are magnetic. I appreciate what Hall is trying to do with Nella Larsen’s novella, but the subject matter is far heftier than the film delivers. Shot gorgeously in black-and-white by Eduard Grau, the film is certainly pleasing to look at. I just hoped for something a tad less sanitized.

I finished the festival with my favorite film of the year: Kenneth Branagh’s Belfast. What more is there to say about our future Best Picture winner that I didn’t already gush about in Telluride? The film simply has no down moments. It’s paced, shot, and performed perfectly. It’s the type of movie that made me fall in love with movies in the first place, which is why I keep comparing it to Cinema Paradiso. There is a love of family, country, and the motion pictures that almost any movie fan will relate to. It was the only film that I saw to receive a standing ovation.

It was no surprise to see it go on to win the festival’s audience award for Best Narrative Film, adding to its collection of wins and continuing to establish itself as the Oscar front-runner. Focus Features has an exceptional movie on their hands, and they know it. And so does every crowd that has set eyes on the film. Academy, you’re next.

The Rescue took home the audience award for Best Documentary. It’s an incredible, edge-of-your-seat thriller that will inspire you and leave you with an understanding of true heroism.

I’m filled with gratitude to those responsible for pulling off the return to in-person festivals. A lot of hard work clearly went into making this weekend an outstanding success. I had a hell of a time and would absolutely recommend the trip to anyone who can attend. I can’t wait to see what they pull off for their tenth year in 2022.