The Long Measure of Dean Stockwell

by David Phillips
in Obits
5

Dean Stockwell was an actor for so long that his career dates all the way back to World War II. Stockwell hadn’t even crested the age of ten when he appeared in three movies in 1945: the romantic drama The Valley of Decision (starring Greer Garson and Gregory Peck), the hit musical Anchors Aweigh with Sinatra and Gene Kelly, and in an uncredited role, Bud Abbott and Lou Costello in. Hollywood. (That’s right, Dean Stockwell was in an Abbott and Costello movie).

He worked at a relentless pace for a child actor (appearing in two-three films a year before taking a five-year break in 1951). The highs of that breakneck stretch included Gentleman’s Agreement and a Thin Man movie. When Stockwell returned to screens both small and large in 1956, the prominence of the productions he appeared in slipped until 1959’s Compulsion. 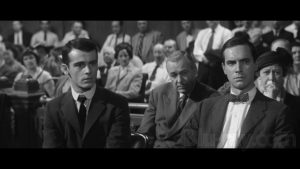 Based upon the infamous true-life Leopold and Loeb case, Compulsion told a fictionalized version of two young men who kill a boy just to see if they can get away with it. Stockwell played Judd Steiner (based on Nathan Leopold) first on Broadway in 1957. He continued in the role two years later. The film was directed by Richard Fleischer and co-starred Bradford Dillman as Steiner’s co-conspirator Artie Wilson (based on Richard Loeb), and Orson Welles as the attorney (based on Clarence Darrow) who pleads for his defendants life in the courtroom. Compulsion is one of the darkest films of the tail end of the censorship era. Shot starkly in black and white with none of the sort of emotive acting that was still popular at the time, Compulsion was In Cold Blood before In Cold Blood hit the silver screen in 1967.

It is a harrowing experience to watch Compulsion. The two men are flagrantly guilty, not particularly repentant, and yet, somehow, through the brilliance of the three actors, the writing, and the direction, the film manages to make a fulsome case against capital punishment. Even these two cretins are human beings, the film (and Welles) argue, and state-sanctioned murder does not negate homicide or advance society. Compulsion was considered Stockwell’s first “adult” role of consequence, and his steely gaze and bloodless visage are still, after more than six decades, chilling to behold.

Sadly, aside from the notable exception of his great performance as Edmund Tyrone in John Frankenheimer’s 1962 version of Long Day’s Journey Into Night, Stockwell’s acting triumph in Compulsion did not springboard him to greater success. Despite working continuously over the next 25 years, he never found a role anywhere close to Steiner over that quarter of a century. Most of that time was spent doing one-shot episodes in television shows from Bonanza to Simon and Simon.

It wouldn’t be until Wim Wenders cast Stockwell as the incredibly kind brother to Harry Dean Stanton’s drifter in the melancholy classic Paris, Texas that Stockwell would once again find a role worthy of his talents. Stockwell’s Walt Henderson is everything Judd Steiner is not. He is patient, loving and understanding. Walt takes in his brother’s son, raises him as his own, and when Travis (Stanton) emerges from the desert and wants to reconnect with his boy, Walt does his best to bridge the gap between father and son. It’s lovely, understated work. The kind that doesn’t win awards, but holds entire films together.

Paris, Texas kicked off a wonderful ten-year run in which he scored plum roles in such terrific films like Friedkin’s To Live And Die In L.A., Lynch’s Blue Velvet, Coppola’s Gardens of Stone, Beverly Hills Cop II, Demme’s Married To The Mob, and Tucker: The Man And His Dream (again with Coppola). Whether he was creepily lip-syncing to Roy Orbison in Blue Velvet, or being a full-on laugh riot in Married To The Mob as gangster Tony “the Tiger” Russo, Stockwell was absolutely nailing his every moment onscreen, and improving (if not flat-out stealing) every scene he was in. After over 40 years in the business. The academy finally took not and nominated him for best supporting actor for Married To The Mob. 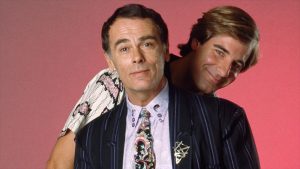 Stockwell then turned to television, co-starring in the well-loved time travel drama Quantum Leap alongside Scott Bakula. The series ran from 1989 to 1993, and scored Stockwell four Emmy nominations for best supporting actor in a drama. During the show’s run, Stockwell also fit in a small role in Robert Altman’s classic Hollywood satire The Player in 1992.

After Quantum Leap was canceled, the quality of parts that found their way to Stockwell became fewer and farther between. While there are certainly notable exceptions such as Air Force One and The Rainmaker in 1997, Demme’s underrated Manchurian Candidate remake from 2004, and a 16-episode stint on Battlestar Galactica from 2006 to 2009, most of Stockwell’s late career resume is made up of projects that I’m not sure many people remember (probably not even some of those involved in them do either).

Stockwell quietly stopped acting in 2015. But over 70 years on film and television, even with the notable gaps in high-level opportunity, when given a chance, Stockwell made the most of every decent chance he got. And for one lovely chunk of a decade, he was truly one of the finest actors working.

The proof is written in celluloid.

Best Picture: Everything I Know About Ranked Voting