VOIR, the Davids, and the Summer of the Shark

by Sasha Stone
in featured
16

I had a dream that I got to work with the director David Fincher. Turns out, it wasn’t a dream.

How did this good fortune ever shine upon me, you might wonder? Most of you know me as an Oscar watcher, or one of the bad seeds that birthed this industry back in 1999. Really, writing about the Oscars was a way to write about movies. I’d grown up living in movies and practically living in movie theaters. But it wasn’t just in theaters or at drive-ins. I would watch movies on our rabbit-eared TVs whenever they came on. Back in the day you had to watch them when they aired because we did not have VCRs. We did not have cable. In the early days, we didn’t even have remote controls. But we had movies and we had movies that played on television. Usually these were black-and-whites, but they were as great as movies always have been and always will be.

I had dropped out of film school in 1993, landed online in 1994, and spent the next five years thinking and writing about movies in a Usenet group intensely devoted to cinema. That was where I first got into David Fincher’s films. I started this site as a way to fuse my own love of movies with whatever the Oscars were. I came from a place of loving MOVIES, not loving the Oscars.

Of course, I had not yet met David Fincher when I first started writing about his work. And he would have had no way of knowing that I’d made much of my own reputation online by writing about him, specifically The Social Network. We finally met after he read my review of The Girl with the Dragon Tattoo. When I told him I’d seen The Social Network 30 times and declared it a perfect film, he told me I was insane.

Since 2011, a lot has changed about movies and the way they are covered. There’s been an ongoing lament that film criticism, such as it is, had supplanted the pure love of film. The Oscar business, my business, seemed to directly impact that trajectory. Does the Oscar industry do more harm than good? If everyone is aiming for those nominations, and in order to get those nominations the movies must deliver what the Oscar voters want — does that create a kind of chokehold that empties out LOVE of movies?

Since then, we’ve seen each other a few times a year to talk about the past, present, and future of movies. The one thing we never or rarely talked about was his movies, which is surprising unless you know him. The last thing he ever wants to talk about is his own work — if you want to embarrass him publicly, start talking about how great his movies are.

No, all Fincher wanted to talk about was other people’s movies — and when you get two people in a room who love movies, whole hours disappear. Spielberg’s Jaws would often come up in our conversations because it was such a monumental film for anyone who lived through that era. We both agreed it was one of the top five greatest films of all time.

We both grew up IN movie theaters. We grew up being shaped by the movies themselves and not by film criticism particularly, though there were definitely voices over the years that were influential. Some critics could really move the needle, like Pauline Kael or Roger Ebert. Reviews existed, but back then only a handful of opinions would drop the Thursday before the movie opened. Now we have a whole industry revolving around films that seem to form a consensus, but since the objective is to be a film critic it often means confronting each film that opens with a critical eye, rather than the eye of someone whose life has been shaped by the big screen.

That is at least part of what led to the new Netflix series VOIR. It was a desire to bring back the LOVE for a fast-disappearing art form and to find our way back to talking about them as a way to see them more deeply, with the goal of appreciating what filmmakers are trying to convey. At times, there seems to be a whole industry devoted to making fun of movies, tearing them apart, mocking them for laughs. I suppose there’s a place for that, but there should also be a place to do the opposite. That is what we hope VOIR can be. 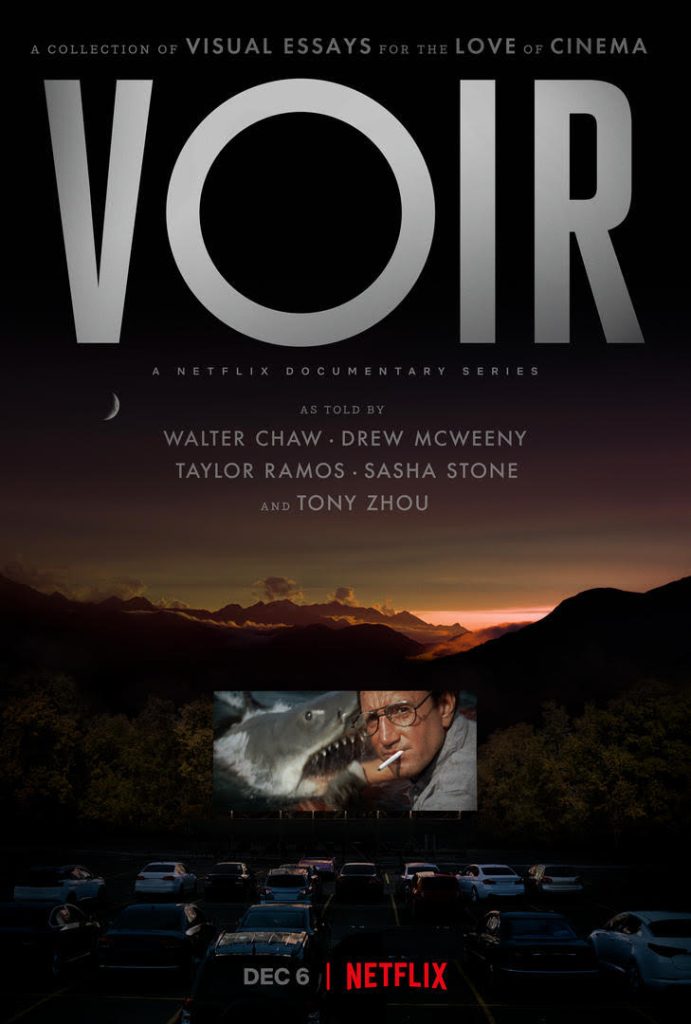 When I was first approached, David Fincher asked me to write about the movies I loved. I gave him a list of pitches. Of course, five of those were about his movies. He crossed them off immediately. Every time I tried to say I wanted to write about Se7en (I do) or Panic Room (I really do) or The Social Network or Zodiac or Gone Girl or The Game, he’d scratch them immediately off the list. And so of course we settled on Jaws because not only was it the defining movie of my childhood (and you’ll see why when the episode airs), but it was his too. I sent him something like 90 drafts and rewrites of just the essay. Yes, it’s David Fincher after all.

He then brought on his collaborator, filmmaker David Prior, who began straight away by correcting a detail I had wrong in my pitch. I thought Brody said “fast fish,” and he reminded me that those words were spoken by Hooper. Now we were cooking. Three people who loved Jaws almost more than life itself and whose entire lives had been shaped by the “Summer of the Shark” and knew every tiny detail of the movie. I thought I knew everything about Jaws, but Prior knew ten times more than that. Most people who love Jaws really do feel like they have a personal relationship with this movie that no one else has. With Prior, that might actually be true.

The other significant participant is my sister Lisa, who is featured in the episode. She and I and most of our friends were all Jaws fanatics, as anyone who lived through that time would have been. It was when everyone went to the movies and no one felt excluded from them. The market decided what got made and so it was in Hollywood’s interest to appeal as broadly as possible.

And that is the story of VOIR, the Davids, and the Summer of the Shark. It was truly a collaboration in the best sense. We were trying to find a way to best express our love of this movie and to show, to anyone watching, how we were shaped by it. Our childhoods were shaped by Jaws, and — as it turns out — our futures would be too in one way or another.

We had no idea when we started that moviegoing as we knew it might be headed out of the future and into the past. That this series will be shown on Netflix may be seen, by some, as an invitation to dunk on Netflix for helping to “ruin” movie theaters. But I’ve been here all this time and I know that isn’t true. The damage was done long before, when the industry’s dependence on superhero movies began alienating adults, and that audience opted out of going to the movies when they found adult options streaming at home. Either way, movies will survive. Movie theaters are a more questionable prospect. Although the decline of movie theaters has been predicted for decades, and here they still stand.

To answer the question, how did I ever get this lucky? It’s unanswerable. Every step of the way I thought, if it stops here — just here — it will still be the greatest thing that has ever happened to me. Somehow it kept going and somehow it is going to show on Netflix on December 6th. 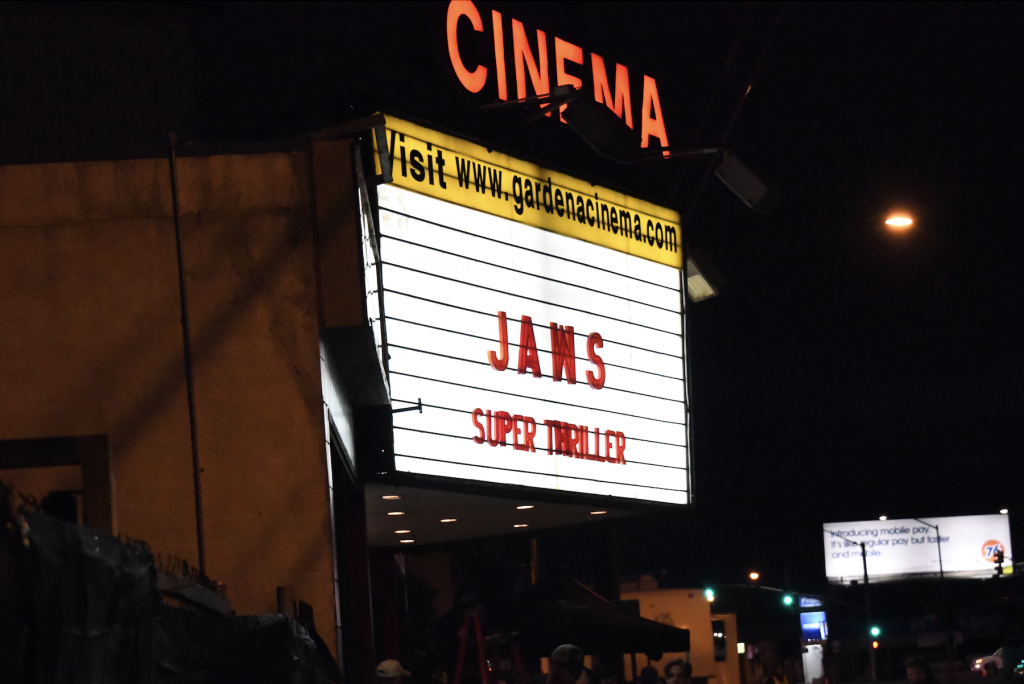 I hope you watch it, I hope you love it. And in the meantime, what was the movie that made you fall in love with movies?

Falling Hard for 'The Harder They Fall'