by Sasha Stone
in BEST ACTRESS, BEST PICTURE, featured, The State of the Race
126

It should go without saying that the next couple of years are going to be brutal to live through and brutal in terms of the Oscar race and brutal in terms of the American Left. Why, because a new silent majority is rising and turning their backs on all of it. Potential coming attractions to a social media feed near you: a dramatic loss for Democrats in 2022. Who knows what happens with abortion and the Supreme Court. A second Trump run in 2024. Nothing that happens for the next few years is going to calm things down in terms of the fear and hysteria that is driving the Left, ergo the Oscars.

Right, so what does that mean in the big picture? Well, it means the same thing for the Oscars as it does for the Democrats: at some point, they have to loosen their grip. This means less Stasi to police thought crimes on Twitter. Less persecution of the past. Less strident demands on film and art. Less micromanaging on the Oscars themselves to reflect a utopian ideal for society.

I can promise you that the growing majority – in the industry, in the audience, throughout the country and world is getting tired of all of it and there will be a massive backlash. True in politics, true for the Oscars. At some point, plain economics is probably going to have to overcome ideological compliance. But we’re not there yet. I know that my readers here are not exactly thrilled that these are my observations.  But my job has been to look back at the past and look forward to the future.

I feel nothing but anxiety about the future. I don’t see a lot of courage in Hollywood. I see fear. I see fear that is keeping people from speaking out but that doesn’t change what they actually think. Remember, just because you have silenced people doesn’t mean you have changed their minds. They are still going to react in a certain way, especially if their votes are anonymous. At some point it is not going to matter what Twitter thinks. At some point, the whole thing will likely collapse. Why, because it is not sustainable.

If you are Stalin or Mao you can simply silence dissent. You can murder, torture or disappear anyone who threatens you. That means complete control of news, art, literature. In George Orwell’s masterful 1984 (aka the best book ever written) he compares having the things he values most taken away by forcing him into ideological compliance as akin to having a bullet in the brain, as he closes his book this way:

“Under the table Winston’s feet made convulsive movements. He had not stirred from his seat, but in his mind he was running, swiftly running, he was with the crowds outside, cheering himself deaf. He looked up again at the portrait of Big Brother. The colossus that bestrode the world! The rock against which the hordes of Asia dashed themselves in vain! He thought how ten minutes ago—yes, only ten minutes—there had still been equivocation in his heart as he wondered whether the news from the front would be of victory or defeat. Ah, it was more than a Eurasian army that had perished! Much had changed in him since that first day in the Ministry of Love, but the final, indispensable, healing change had never happened, until this moment.

The voice from the telescreen was still pouring forth its tale of prisoners and booty and slaughter, but the shouting outside had died down a little. The waiters were turning back to their work. One of them approached with the gin bottle. Winston, sitting in a blissful dream, paid no attention as his glass was filled up. He was not running or cheering any longer. He was back in the Ministry of Love, with everything forgiven, his soul white as snow. He was in the public dock, confessing everything, implicating everybody. He was walking down the white-tiled corridor, with the feeling of walking in sunlight, and an armed guard at his back. The long-hoped-for bullet was entering his brain.

He gazed up at the enormous face. Forty years it had taken him to learn what kind of smile was hidden beneath the dark mustache. O cruel, needless misunderstanding! O stubborn, self-willed exile from the loving breast! Two gin-scented tears trickled down the sides of his nose. But it was all right, everything was all right, the struggle was finished. He had won the victory over himself. He loved Big Brother.”

But the problem is, dissent is still allowed in this country. Sure, there is an ongoing effort to purge undesirables from the shared spaces of the good people – but the voices in opposition to it are not only growing louder but more and more people are gravitating towards those voices. Maybe not on Twitter. Maybe not in the mainstream, but outside of it. Note how it was Yellowstone that shocked with the highest ratings. If you have silenced dissent, if you don’t know what people are actually thinking vs. what you want them to think you are going to have a hard time predicting what they will do.

Things are about to get … ugly.

Notice how most pundits are naturally gathering around five white Best Actress contenders? Sure, there might be a lean towards Jane Campion and the Power of the Dog, and there is no doubt the movie that is wowing crowds right now is Belfast. Some say it was COVID hysteria (like me) that hurt King Richard at the box office. David Poland says it was because Warner Brothers opened it in too many theaters. Still others say that it was available on HBO Max so why would people bother going to the movies? 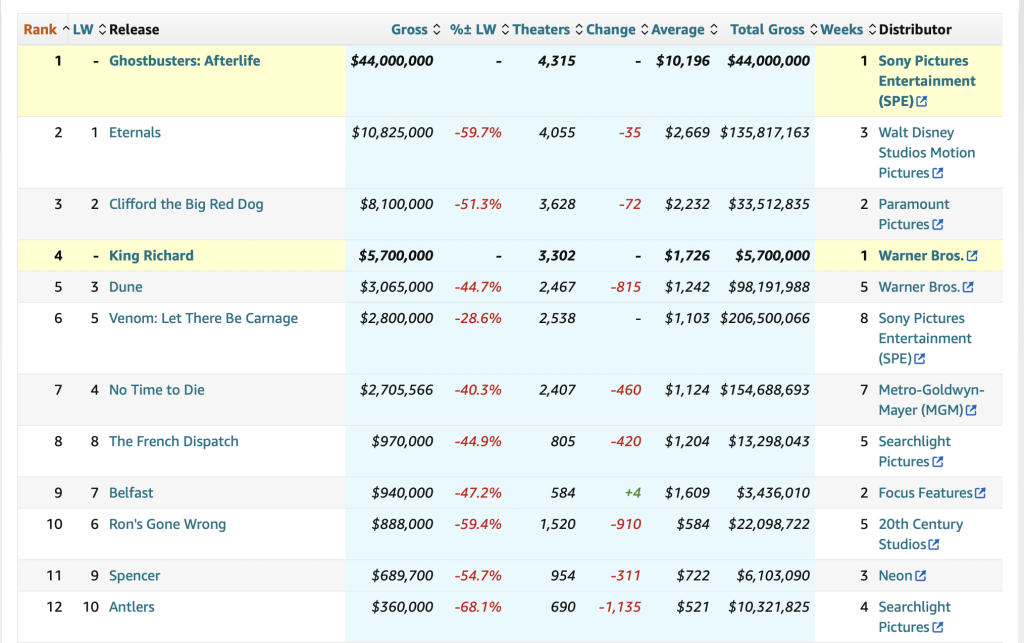 King Richard is a crowdpleaser if there ever was one. But it could not bring people to theaters the way, say, Ghostbusters did. Does it matter? Does box office even count anymore? This is the Thanksgiving and Christmas season where movies like King Richard and Belfast should be playing like gangbusters. Yet without the market – how to measure whether anyone is even watching these movies?

What is going to drive the buzz around them? Film Twitter? Is that really it? When you think about the critics groups you have to conclude that Film Twitter will be driving at least some of that. For the next month or so that is what we will be immersed in. The consensus, more or less, will become apparent. They will be vulnerable to attacks if they do not comply in terms of the rules in place: pristine reputations for all involved, intersectional coalition, no cultural appropriation, etc. Their reputations will be on the line because their reputations are measured by what Twitter thinks.

If You Build it, They Will Come

If the call was for more inclusive movies, then 2021 has provided them. If the call is to make the Oscars more inclusive, there are plenty of options that voters can select from – they are both good movies and representative.  We don’t have a market as such that must be catered to. But we do have a situation where a problem has been addressed, and it should show that things have changed.

It seems unimaginable to me that people are not including Jennifer Hudson in their predictions for Best Actress considering that not only did she easily give one of the best five performances of the year, but the film is written and directed by women of color. Not only that, but it’s about Aretha Franklin, arguably among the most influential black women who ever lived. She hand-picked Jennifer Hudson to play her because there wasn’t a single other person on the planet who could manage it. Hudson seems like she was born to play this part.

In the entire history of the Oscars, heading into our 94th year, in a time of extreme activism to the point of purging dissenters, to the point where the Academy Museum is one long apology for its history of rewarding an industry that mostly honored white people, has to date only awarded ONE black actress for lead, we’re really going to just walk on by Jennifer Hudson? Are you all out of your minds?

Then we must also look at CODA.

For all of the bloviating and complaining about authenticity where Eddie Redmayne has to apologize for, you know, BEING AN ACTOR, here is a movie that at last gives opportunities to actors with disabilities – and what do they do? They knock it out of the park and have made one of the best films of the year with a strong ensemble and strong central performances. Yet, somehow, in all of this – it’s not considered one of the major players.

In the Heights is in a strange situation because even though it was run through the Twitter-ator and called problematic it is still an unprecedented project to hit the mainstream, from its actors to its director to its creator. No, it doesn’t have the buzz right now. But if you’re looking for inclusivity, if you are looking for a way to show that Hollywood has changed – why would this movie not be considered?

Activists insisted on change. Hollywood delivered that change. Now it is time to cash the check. So what I’m wondering is, what is driving the buzz that would ignore these movies? Based on what exactly?

Granted, last year was a bit of a nightmare in this regard. We knew from the beginning of the year through to the end that there was something performative going on. The critics, for instance, did not award any white males. It was non-white or women or women of color. By the end of it, no doubt, people were chafing against the constraints of feeling they needed to put inclusivity over actual quality. But that doesn’t mean the whole thing is ready to break apart. In a climate where movies like In the Heights are not politically correct enough, and at a time when the BAFTA members don’t even get to pick their nominees, I’m having a hard time seeing how this plane lands without factoring in the enormous changes from this past year.

I would be lying if I said that everything was not on the brink of collapse. I do believe it is. The Oscars, the film industry, the Left – all of it. That could just be my own paranoia. It could be my trained eye at seeing the future. But I sense a backlash is coming, that people are going to be sick of activists dictating everything they do, ordering them to believe a certain way, to speak a certain way. I don’t know what the breaking point will be. I don’t know when exactly it will come. I do not think it can’t be stopped. The main reason is what we talk about often, the old pendulum swing. Things pull too far in one direction, then the pendulum starts to swing back in a different direction.

But we’re not there yet. Now is the time to still think about – in addition to making the Oscars more audience friendly – making hay while the sun shines. That is why I can’t let go of the idea that Jennifer Hudson is still one of the frontrunners to win.