by Sasha Stone
in News, The State of the Race
252

We are arriving at the point of the Oscar race that I dread every year. Until the nominations come down, all of the doors are wide open. It’s easy to imagine the possibilities. But once we actually see the consensus preferences boiled down, every year, we get that awful feeling.

The good, the bad, and the ugly were all laid bare today. It wasn’t that they were so bad — it’s just that they were so limiting in their scope. There did not seem to be many pleasant surprises. For the Critics Choice, it was all very Film Twitter in how it came down, more or less, minus a House of Gucci. The Globes, I thought, made a decent enough effort to hold onto their place in the race by showing preference for a few titles.

Before we get to the bad, let’s talk about the “good.” For me personally, there isn’t a lot of good. I look at the Oscar race from a different perspective than most. I’ve been doing it so long I know what the conversations will be about long after the heat of the season dies down. I know what kind of controversies are headed our way in the coming weeks if things continue along these lines. And I know what kinds of films are most likely to stand the test of time and which are going to end up with people saying “really, that?”

That’s because Oscar season is a love affair — passionate and brief. Sometimes really hot. Sometimes awkward. In the worst case scenario, you’re laying there and pretending to like it. More often than not, this is where I find myself thinking, “I don’t want to make anyone feel bad but I am not enjoying this.” At its best, it’s the kind of love affair you remember for a lifetime. You know, where you can’t think about anything else? Where you are distracted and giddy and out of your mind? That, to me, is when Oscar season is at its best.

The Good — Everything Is Mostly on Track

The Critics Choice doesn’t have much in common with the Producers Guild and the Academy. For instance, the Critics Choice has 500 members and they only give you three options for Best Picture. You’re getting passionate favorites. But with the Producers Guild and the Oscars you have ten slots, and those will be broadened significantly from what we see by either of these lists.

These are the seven films that have hit AFI, NBR, Globes, and Critics Choice:

I would imagine these are locks for Best Picture. Then we have the next tier — films that got in with AFI, Globes, and Critics Choice, but missed NBR:

The Power of the Dog
Tick Tick Boom!

Then the films that got AFI, NBR, and Critics Choice:

The film that got the AFI and the NBR:

The Tragedy of Macbeth

If we look at our charts, we can see that it is rare to get all of these heading in and not get a Best Picture nomination. In the era of the expanded ballot, Inside Llewyn Davis, Mary Poppins Returns, and If Beale Street Could Talk were the only films that made it with all four groups and then faltered. 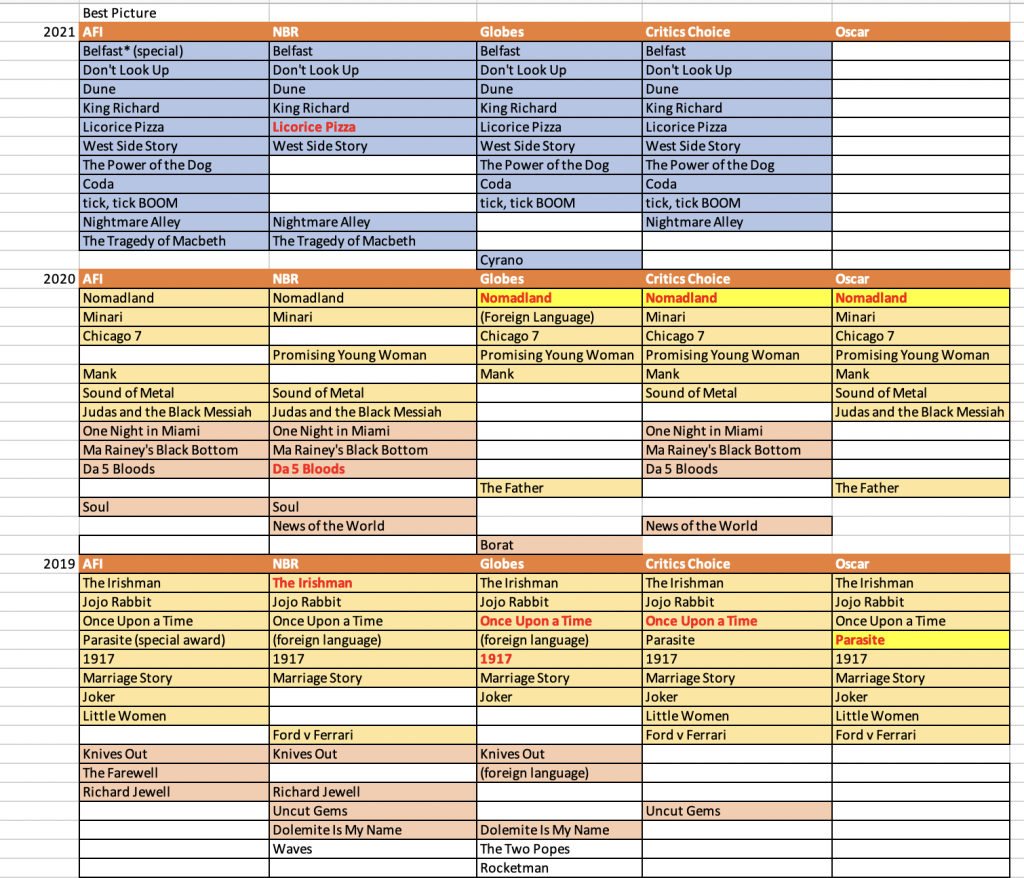 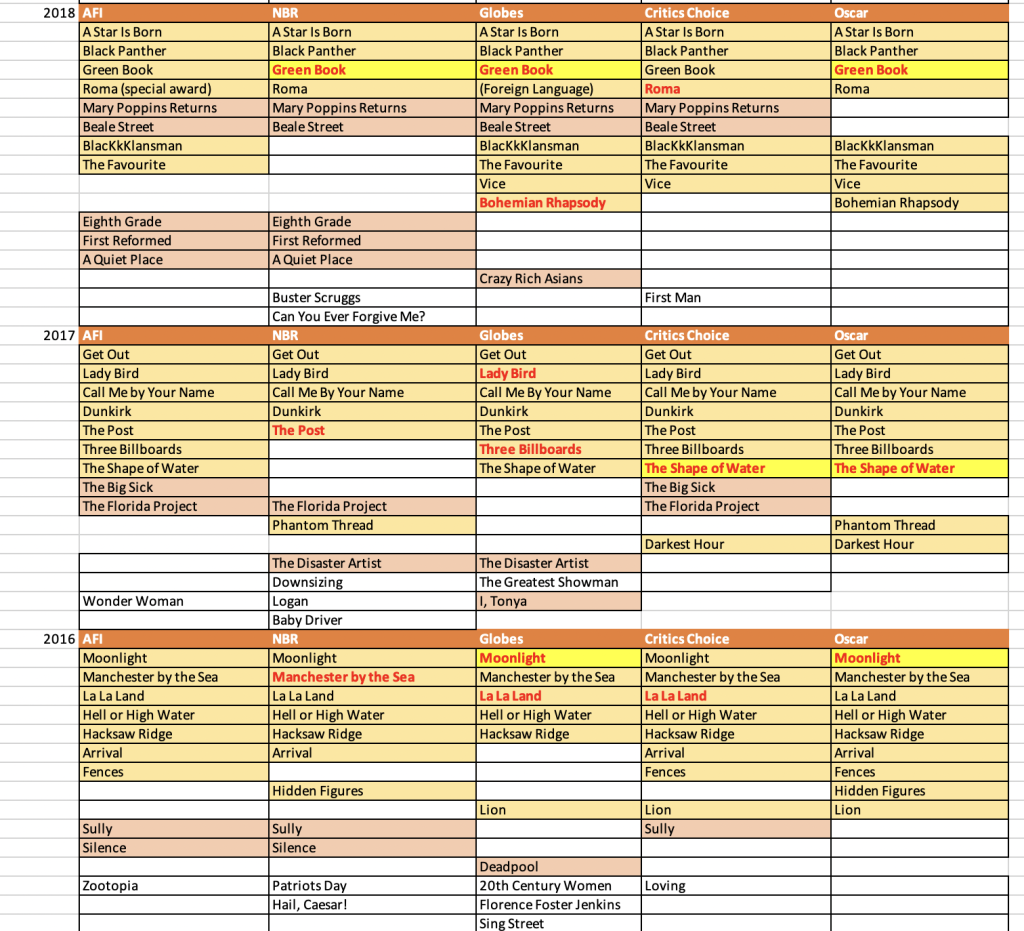 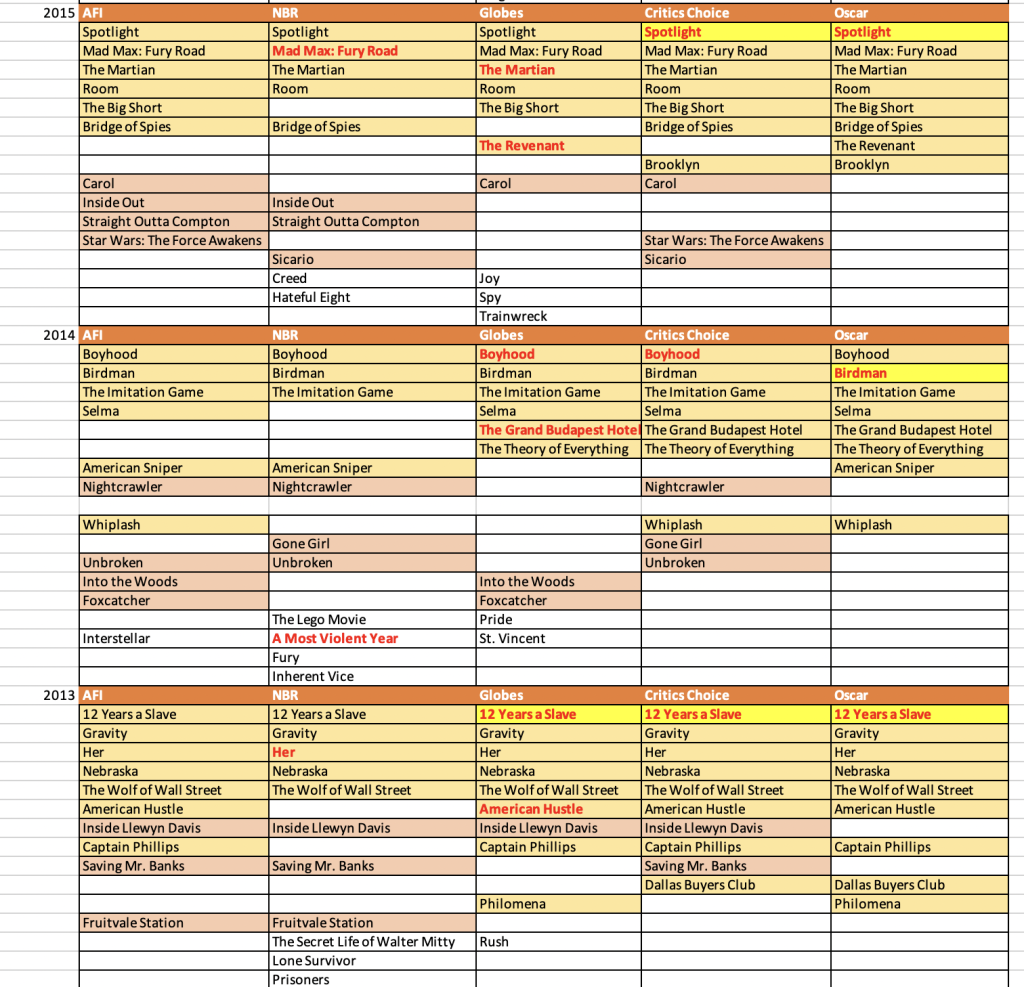 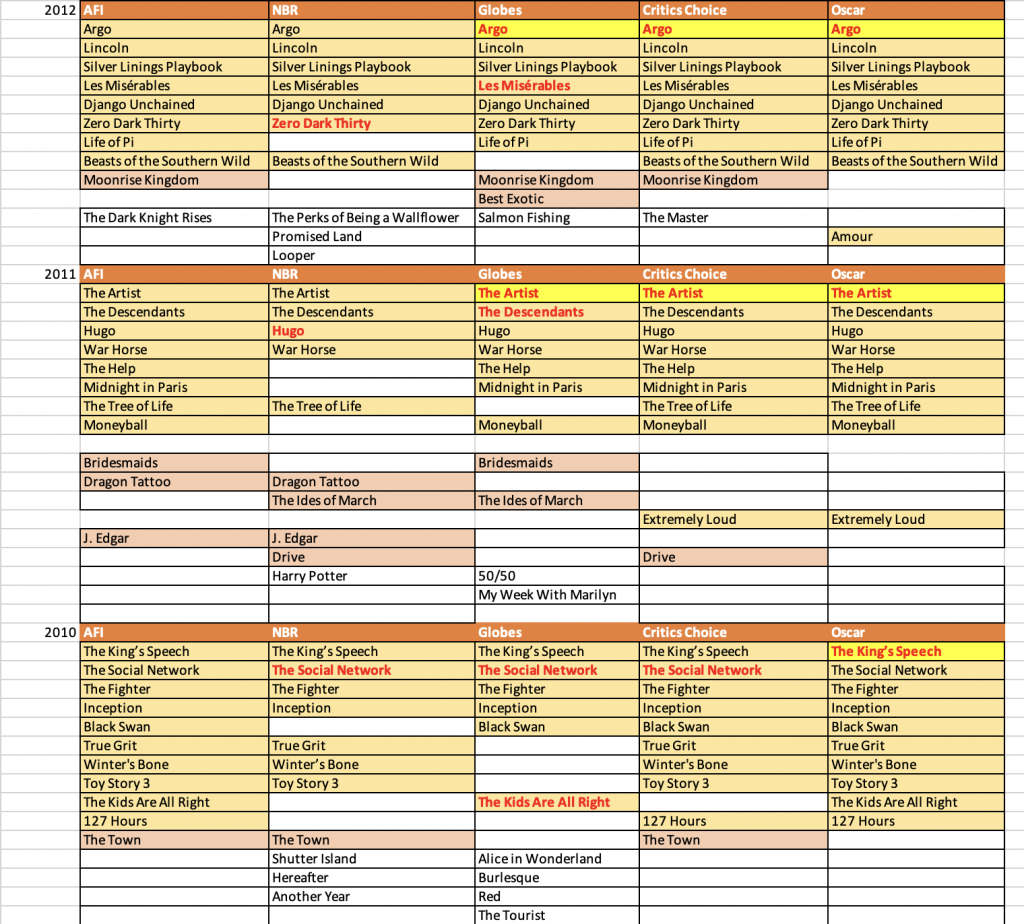 One to three titles from the Critics Choice are likely going to miss. So you have to figure out which ones are going to be dumped.

In the years where the Critics Choice missed, where did the films that made Best Picture at the Oscars come from?

In 2009, District 9 and The Blind Side came out of nowhere.
In 2010, The Kids Are All Right took the place of The Town and it had an AFI and Globes comedy.
In 2011, Drive was left off.
In 2012, Amour came out of nowhere and replaced Moonrise Kingdom.
In 2013, Inside Llewyn Davis and Saving Mr. Banks were left off, Philomena came from the Globes.
In 2014, Nightcrawler, Foxcatcher, and Gone Girl were left off, American Sniper (AFI/NBR) was put in.
In 2015, Carol and Star Wars: The Force Awakens missed, and were replaced by The Revenant (Globes).
In 2016, Sully and Loving were out, Hidden Figures (AFI) was in.
In 2017, The Big Sick and The Florida Project were out, Phantom Thread was in.
In 2018, Mary Poppins, First Man, Beale Street out, Bohemian Rhapsody in (Globes).
In 2019, Uncut Gems missed.
In 2020, Ma Rainey, Da 5 Bloods, One Night in Miami were replaced by The Father (Globes).

The Globes have the slight advantage in including eventual Best Pic nominees that weren’t on the Critics Choice list. This year, there is only one that got into Globes that didn’t get into Critics Choice: Cyrano.

Putting it all together, we have these films:

These are the six or seven films that have hit AFI, NBR, Globes and Critics Choice:

One of these will likely have to go:

And replaced, very likely (though not necessarily) with one of these:

Cyrano
The Tragedy of Macbeth

Could a movie come out of nowhere and get in without hitting any of these first? Sure. Those movies will likely be anchored to a movie with a strong acting performance, as happened here:

Then there is a movie like District 9 that just found its way into the Best Picture race via word-of-mouth.

There were no dramatic surprises anywhere that blew the lid off the joint, I don’t think. If you are a Licorice Pizza fan, you’d be happy with the double nomination for Alana Haim. Lady Gaga fans will also note a double nomination there but not much else support for House of Gucci.

The Bad – Why Does It Feel Like High School?

It feels like high school because it is all very much about Miss Right Now as opposed to Miss Right. It is about popularity, buzz, the “cool kids.” It is always like this, no matter the group. Humans really have no other way of evaluating anything. They go with the flow. They feel excitement for winners and shy away from “losers.”

It is never all that fun when the doors close on hope. On the one hand — who cares, right? They’re just stupid film awards. On the other hand, when your favorites don’t seem to have any chance whatsoever and then you just have to slog through the rest of the season — well, that can feel like bad news. It’s certainly not like tornadoes ravaging the Midwest bad, but it’s just a mild bummer.

Even though neither the critics awards or even the Golden Globes can really hurt something that’s not among the nominees, there are some films I expected the Globes to notice that they didn’t, like House of Gucci, The Last Duel, and Being the Ricardos in their Best Picture categories.

There is just no getting around that the awards race often feels like an insulated, isolated bubble. But at the moment, it is what it is.

Jennifer Hudson being shut out of Best Actress is a reminder of just how badly the awards race has screwed over black women. I don’t know any other way to say it except directly. Hudson should be the frontrunner to win the whole thing and she wasn’t nominated at either the Globes or the Critics Choice. To make the situation even more stark, all of the nominees for the Critics Choice are white women:

Maybe they genuinely believe all of these are better than Hudson in Respect, but I find it extremely hard to buy that. In fact, I feel pretty certain that three of these aren’t as good as Hudson. But worse than that, after a year of mandates and cancellations of the Golden Globes — and all of the high-minded ruling class pretending to care about diversity and inclusion — we arrive back to this (sunken) place. Black women can get in and can WIN in the Supporting category. But they can’t break into lead.

To date, only one black actress has won Best Actress in going on 94 years of Oscar history. Are we going to wait 100 years? I don’t want to be writing about this in 2021. I didn’t think I’d have to. I’m even sick of my own voice after writing about this for so long. But WHEN IS IT GOING TO CHANGE? And why does no one care?

I also don’t understand how Ridley Scott could make two movies and the only nominations to come from either of them is Lady Gaga for House of Gucci and a supporting nod for Jared Leto at the Critics Choice. The Last Duel is a movie the Oscar race should not ignore and yet here we are.

But it is what it is, and there is probably no point in caring about it. It is only film awards after all. But sometimes I get annoyed by the hypocrisy of an industry that pretends to care, but when you get down to it, they don’t really. We saw this last year when Viola Davis and Andra Day lost to Frances McDormand winning her third lead Oscar. I know they should not be doing anyone any favors. They are supposed to be voting on what they like. But sometimes that doesn’t make sense if your job is to honor the best. This is one of those times.

To me, it’s just plain weird that they would ignore such a brilliant performance as Hudson’s, not to mention a film that meets all the demands for more films by and about women of color. People complained. They wanted to see an effort being made. This production fulfilled those wishes. But now we find out that awards voters believe it isn’t good enough. It isn’t enough to make a good movie like that with a brilliant central performance like that. No, it also has to be sexy and buzzy and popular among a certain type of person.

I don’t think the Oscars need to go “woke” to satisfy the insular world of Twitter and film criticism. If anything, they need to broaden their insular world more. Respect is a movie that was broadly liked. Not by the critics but by audiences:

It was enjoyed even more than Licorice Pizza, which is basically Citizen Pizza to film critics:

Maybe it doesn’t matter what, you know, the ticket buyers think. But where Respect and Hudson are concerned, I just gotta say — man, how can you look at that movie and that performance and this point in history and deny her a nomination?

History will remember Hudson’s turn as Aretha Franklin well. She’ll probably be remembered better than 75% of the names that ultimately get in for Best Actress. I’d lay money on that bet.