Predictions Friday – Can Spider-Man Bridge the Gap of Dying Theaters and the Oscars?

Your mission, should you choose to accept it, is to find 300 people (more or less) who will name Spider-Man: No Way Home as the best film of 2021. I can probably imagine the type. Older white male, say, roughly mid-30s up to mid-50s, who grew up with Spider-Man but also quietly and silently chafes against what has become of the Oscars of late: smaller, more critic-friendly, not the big extravagant productions of the past. They don’t particularly like superhero movies unless they make a really good one, like say, Black Panther. Then, they might. How many of those voters might be in the Academy? Hard to say. But if there are at least 800 out of 9,000, then a very popular movie is about to land in the Producers Guild 10 and maybe the Best Picture race. I know: it seems insane, it really does. But hey, we live in insane times.

Peggy Noonan has written quite a lovely piece over at the Wall Street Journal about West Side Story and the death of movie theaters. It is similar to the one I wrote in that it acknowledges that movies, as we once knew them, are scarce if not extinct. That means people like me and Noonan or anyone who remembers when adults with discerning taste still turned out to the movies around the holidays to see quality films are going to watch that kind of movie at home now instead.

She goes into depth about why people might have stayed away — we know the drill. The Blue states stayed home in an abundance of caution about of COVID, and the Red states stayed home believing most movies are probably yet another “woke” Hollywood lecture. But, says Noonan:

As to “West Side Story”: It’s lovely. It’s beautiful, beautiful, and tender about America. The music is even lusher, fuller than in the original and the look of the movie is more colorful and sweeter. It’s beautifully cast; every young star is gifted and believable, and you have an honest sense of witnessing the beginning of brilliant careers—the guy who plays Riff, the guy who plays Bernardo, and the young woman who plays Maria.

It’s not woke, it’s wonderful. “America,” that most American of songs, so knowing but not jaded, is done differently from the original but better, more communally, and it’s just as joyous and comic.

It’s good that this story, this music and these lyrics, enter the world again.

The whole thing makes you feel that America has a chance.

If I were a middle or high school teacher I’d take my class to see it and say, “The music and lyrics are very great and you must know them to be culturally literate; also America was kind of like this once.” I’d take a college class after having them read Jane Jacobs to understand better what was lost in the slum clearance that made way for Lincoln Center.

There are flaws, but so what? The cultural framing of the Jets and the Sharks is a little tidy and not quite on the mark. It made me think of Clifford Odets signaling the immutable socioeconomic forces that propelled the anguished working-class boxer who’d rather be a violinist. Not everything has to be explained, and some things were too heightened. The slum-clearance sets were a little too war-torn Berlin and looked like outtakes from “Saving Private Ryan.” New York didn’t look like that even in the age of urban renewal. And the end somehow takes a little longer than you want. But again, so what?

A closing note on the audience. I saw it in the AMC theater on 68th and Broadway at 12:30 p.m. on a weekday. That’s pretty much where the action of the story took place, in 1957. The theater was about 10% full. A mix of ages, but more skewed over 50. Here’s what struck me. Nobody left at the end. They stayed in their seats throughout the closing credits, and applauded individual names. Mr. Spielberg got the heartiest but everyone got some.

10% full. Does that break your heart or what? In New York on 68th and Broadway, it should have been packed.

She closes it this way:

My thought is maybe only 10% are seeing excellence in America right now but when they do they’re so appreciative and want to show it. Ten percent of 330 million people is 33 million, and that is quite an audience. Someone will have to find out how to fully serve them in the revolution we’re in, and it won’t be with superheroes.

Moving over to Spider-Man: No Way Home, even grumpy Jeff Wells likes it enough to envision it getting a Best Picture nomination. The reviews are very good and the film will come in late in the game. But remember, it’s not too late because voting doesn’t start until the end of January.

I’m thinking that Spider-Man will be the movie that gets people out to the theaters and maybe we’ll start seeing pretty good numbers again. It is pretty astonishing that this was the year that China’s film industry overtook the US in terms of box office. Here are our top-grossing weekends for the year. [source: Box Office Mojo]: 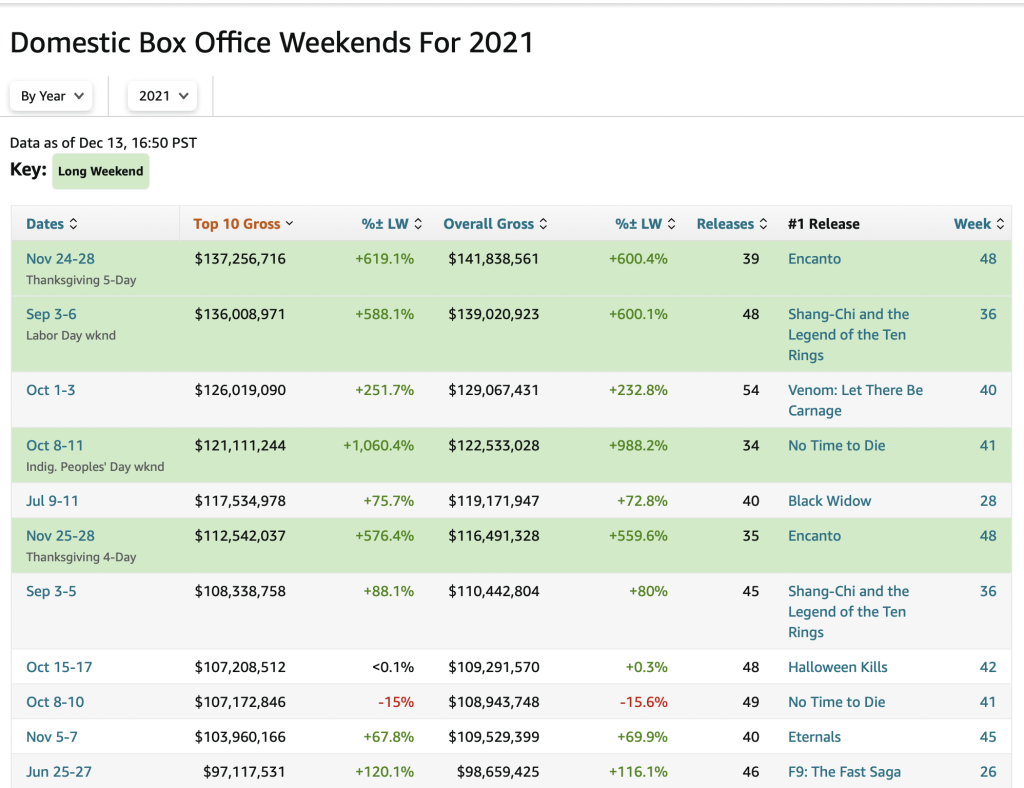 And here is China’s: 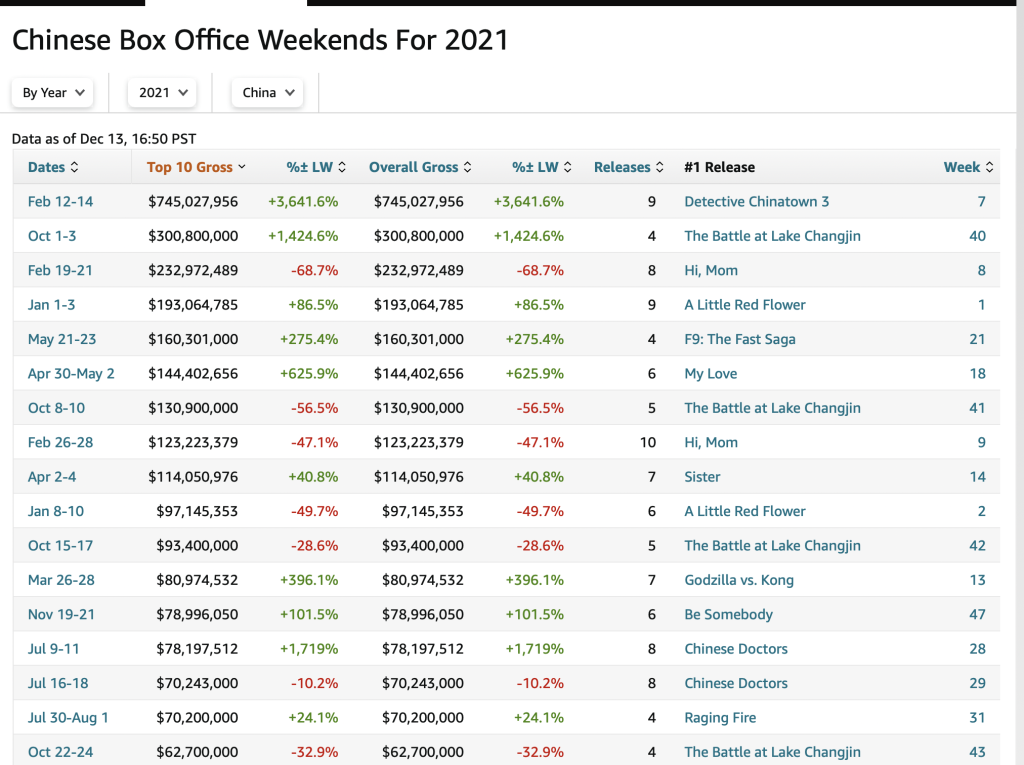 And look at our drop from previous years, like 2019: 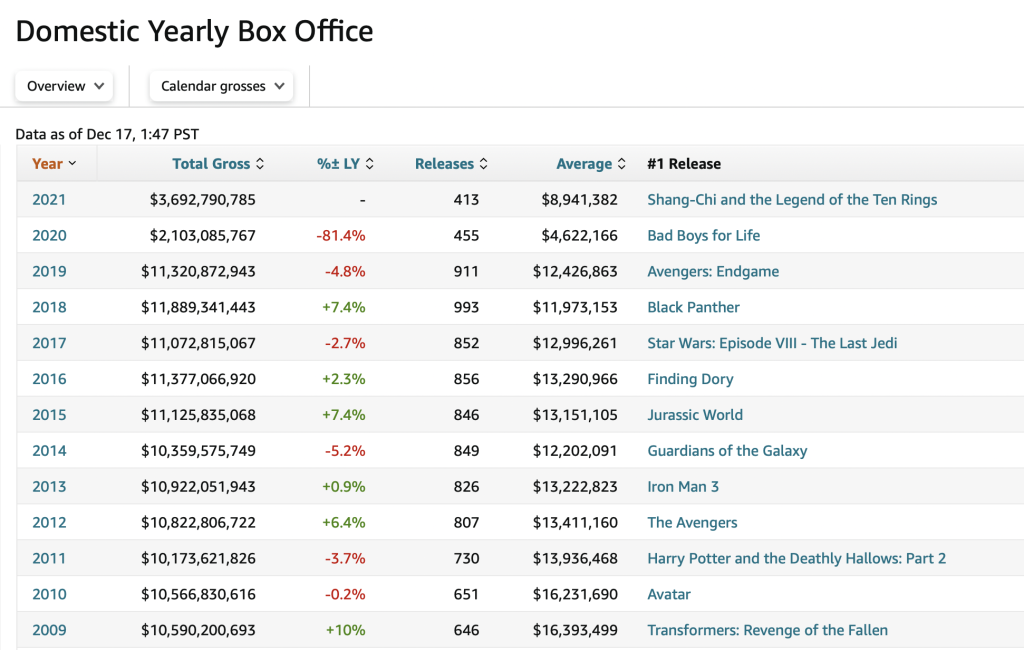 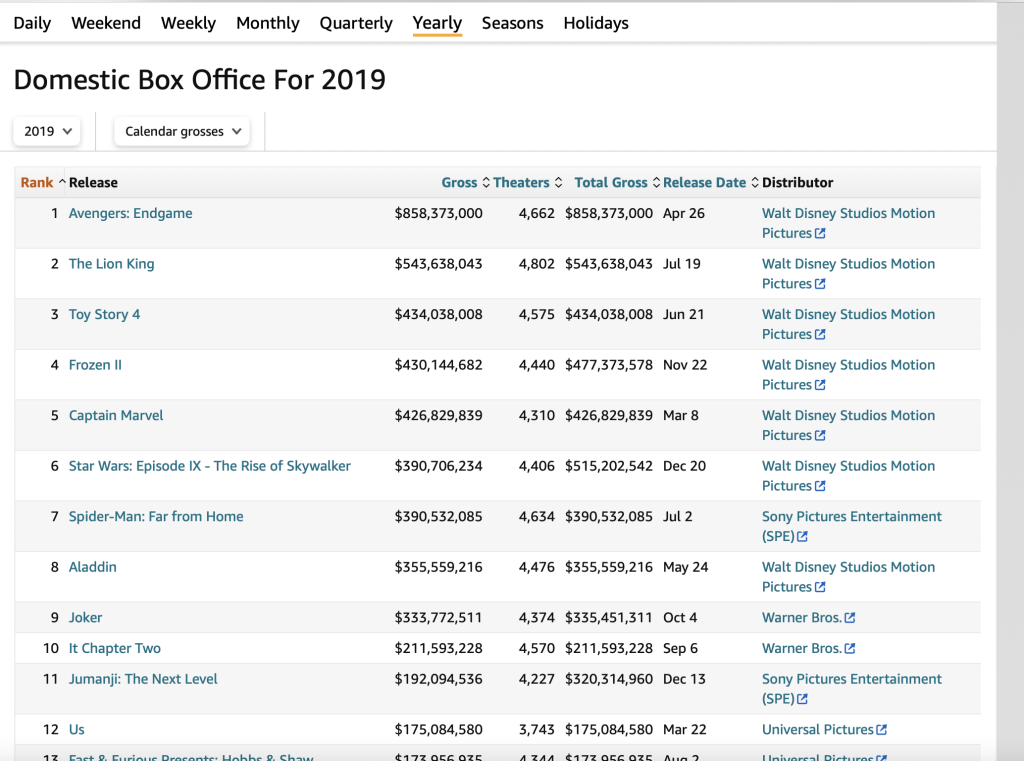 It isn’t just box office that’s dying, it’s also the Oscar ratings, as we all know. So it isn’t just COVID. It is also the partisan divide. This is something that, in my humble opinion (as I’ve been writing about for a while now) Hollywood should broaden its reach and regain its credibility among the half of the country that it has alienated. Remember, we aren’t talking about just Trump supporters or conservatives here. We’re talking about a lot of people who now see Hollywood as having “gone woke.” That’s just the truth of it. If you bring it up on Twitter or among your friends, they will likely treat you to a struggle session about it or flat out deny it. But if you listen closely and you pay attention you will see that it’s become a turn-off almost uniformly across the board.

So, back to Spider-Man — the Academy could do worse than nominating what is sure to be one of the best films of 2021. This is what having ten Best Picture slots was designed to do in the first place, remember? They expanded the ballot in 2009 after The Dark Knight did not get a Best Picture nomination and there was enough upset that they decided to open things up to supposedly make room for genre movies.

In 2009 and 2010 they did just that. They had a much wider scope of movies they could let in, like Up and Toy Story 3, Inception and District 9. Once they shrunk it back down to offering voters the chance to name only five Best Picture nominees, it became much more like their favorites over and over again: niche, critically-acclaimed, insular movies. Except every once in a while a popular movie would pierce the bubble, like Black Panther, Mad Max: Fury Road, Get Out, or Argo.

The Oscars have become way too micromanaged by Twitter (like everything else), and it’s perhaps time to start thinking about making them bigger rather than smaller. Nominating Spider-Man is a good way to do that. Just saying!

Meanwhile, this weekend will herald the Los Angeles Film Critics winners, a group that does still move the needle somewhat. We will be posting our predictions for this later on tonight.

Other films that made money this year, and have a shot at Best Picture are Dune, No Time to Die, and Shang-Chi [source: Box Office Mojo]: 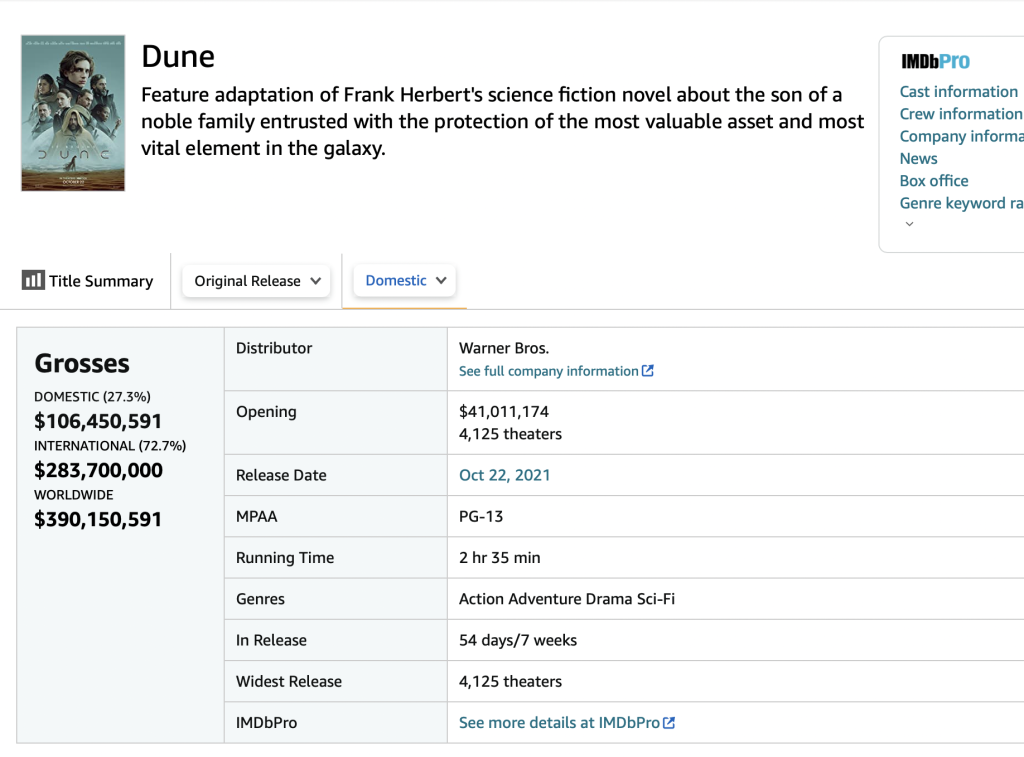 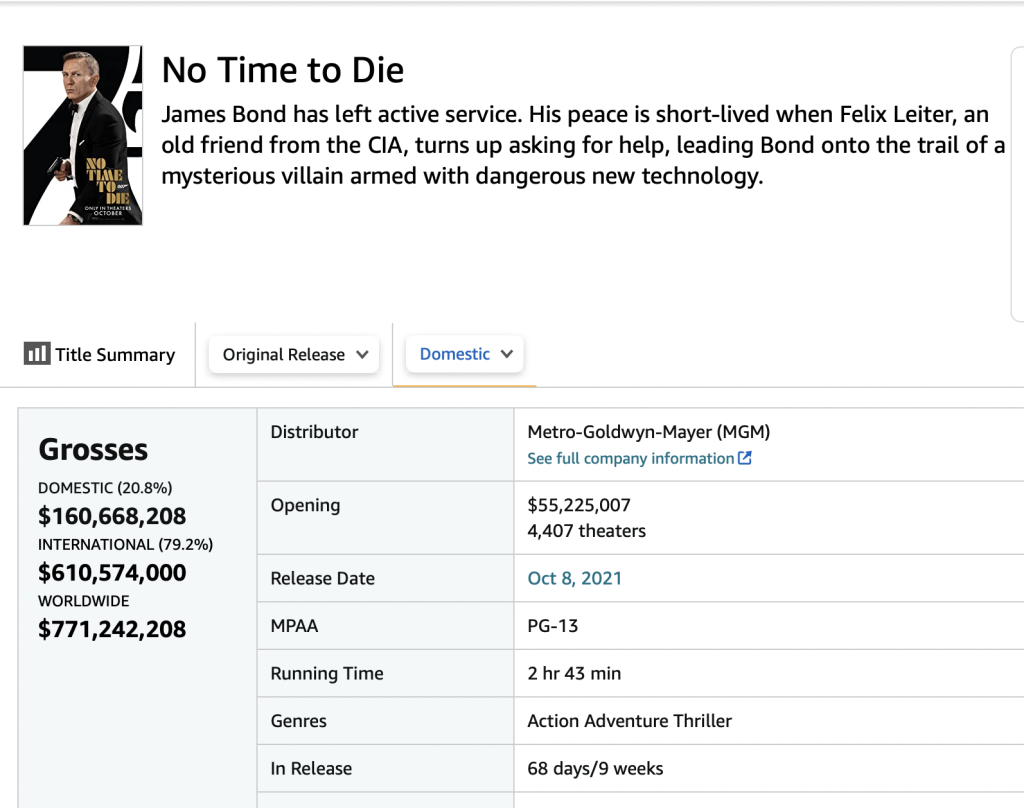 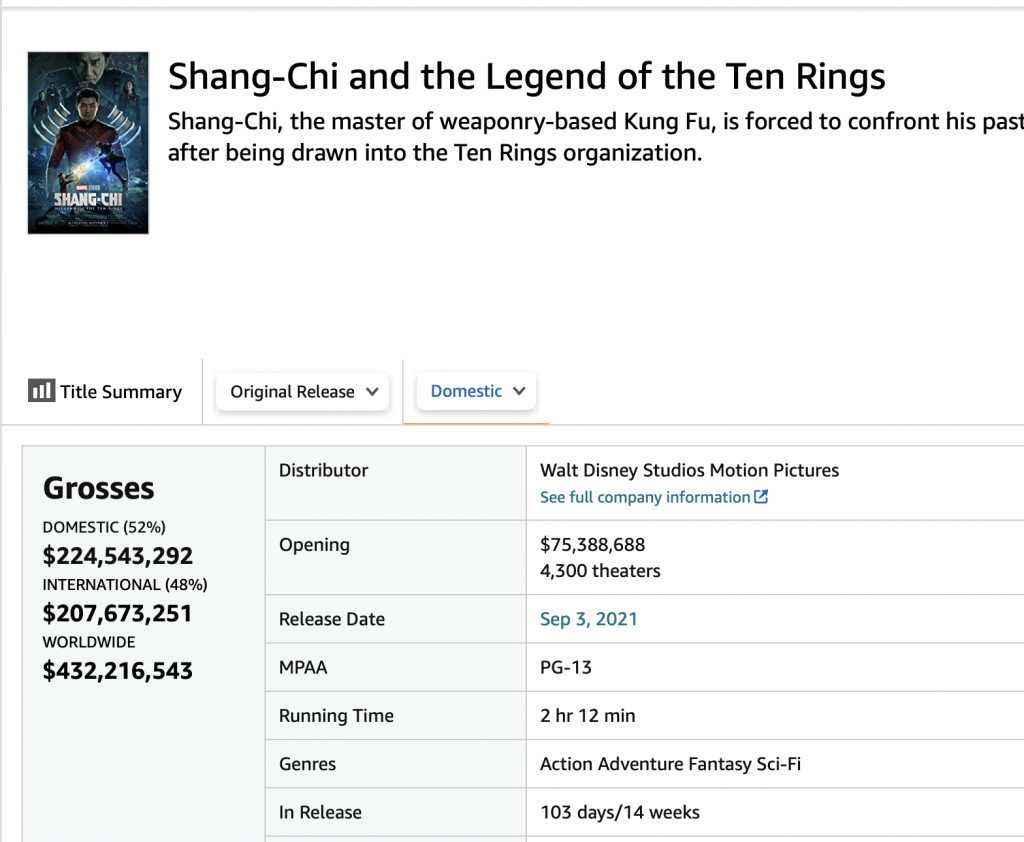 We know Dune is going to be in there. But might there be one other film from the blockbuster genre? If the Academy wants to start becoming more populist, maybe they should think about adding more members who might hail from their work in the superhero genre. Just a thought.

Either way, here are the current predictions.

Cinematography
The Power of the Dog
West Side Story
The Tragedy of Macbeth
Dune
Belfast
Alt: Nightmare Alley

Costumes
Cruella
House of Gucci
Nightmare Alley
West Side Story
Dune
Alts: The Last Duel, The Power of the Dog