The Beautiful and the Damned – Top Ten Performances of the Year

Deciding what defines great acting is subjective. Sometimes we just like the characters. Sometimes we like the actor. Sometimes we like both. Sometimes we’re surprised, other times disappointed. My own definition of what makes great acting has to do with how often I see the actor and how often I see the character. The closer they come to letting themselves disappear, the better I think the acting. It isn’t a matter of them playing themselves and doing a great job, though sometimes that is a satisfying way to watch an actor. But if we’re going to put them side-by-side and compare them, I’ll go with transformational skill every time. Here are the performances and ensembles I thought stood out this past year. 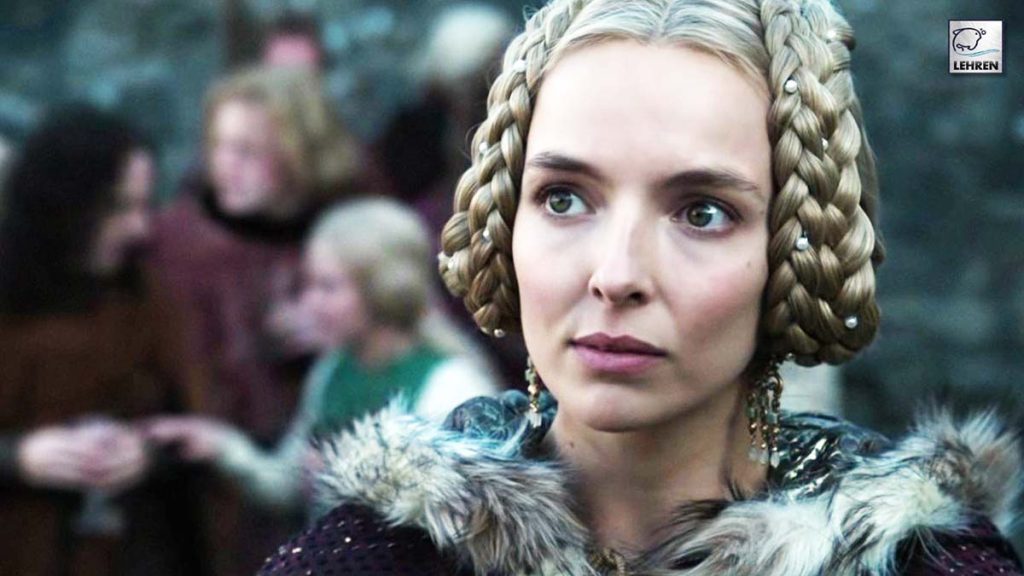 Jodie Comer — It isn’t Comer’s year, but that doesn’t mean she didn’t give one of the best performances of the year. The camera loves Comer’s face. This was obvious from her early work, like the homewrecker in Doctor Foster, and throughout Killing Eve. Now she’s a big screen movie star and she is every bit as compelling as she is on the small screen. She plays her character as seen through the eyes of two rival men in her life before finally, in the third act, showing what really happened to her. Every time this story is told, Comer’s performance goes deeper until finally we understand who she is and what she went through. It’s a brilliant performance and in a different kind of year would be among the frontrunners. 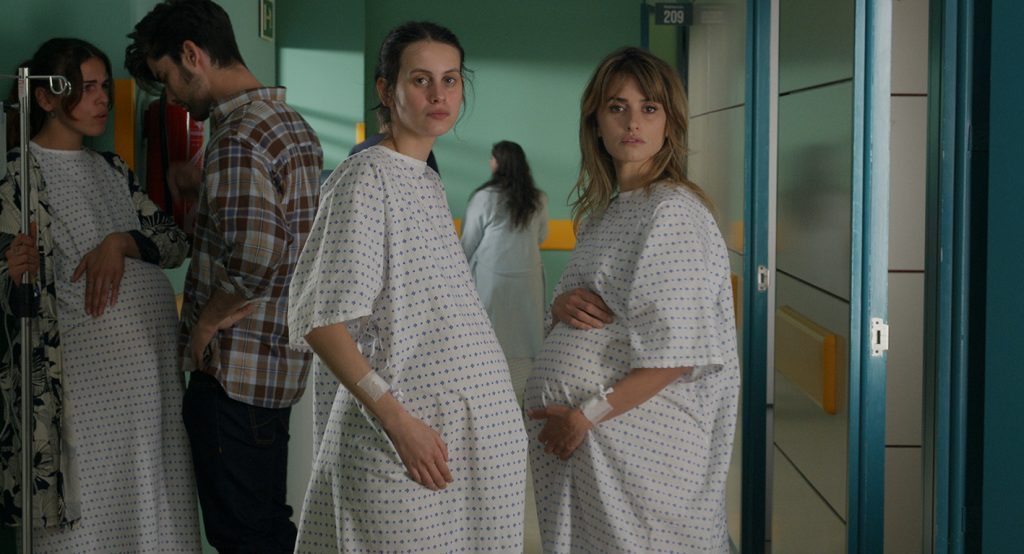 Penelope Cruz — While Cruz is technically the lead in Parallel Mothers, she’s joined with the other mother, Milena Smit. The two of them together guide us through the two paths each of them takes when their babies are switched at birth. The film is about how we become mothers and how so little of that has to do with being biologically connected. The brilliant Pedro Almodóvar has made a film about resurrecting the long forgotten past and the recent past, in order to forge ahead with a brighter future and a self-made family. Cruz has long been Almodóvar’s muse and is usually more of a live wire than she is here, but it’s really the maturity of this character that makes her so memorable. 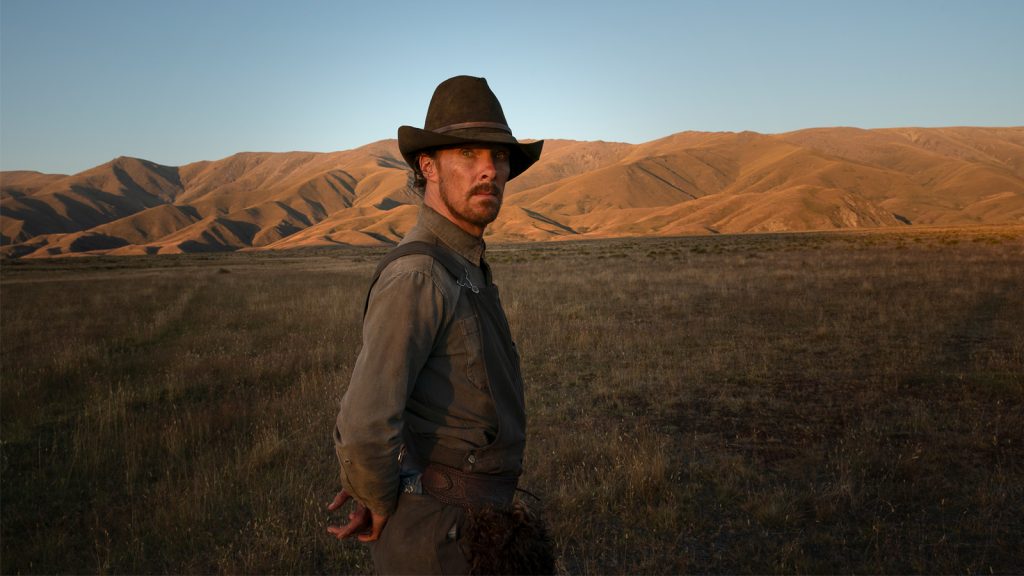 Benedict Cumberbatch kept me up all night after I watched The Power of the Dog. Some of his expressions haunted me, like the look of surprise on his face when his newfound protégé, Kodi Smit-McPhee, kills a rabbit. That look says that he’s surprised this boy he believed was too weak to kill a rabbit had done it so casually. His look was one of surprise and respect. It was one of the nuances in a complex, brilliant performance — indeed, Cumberbatch’s absolute best. It would have been easy for him to play Phil Burbank (a name you can’t forget) as a villain, but what makes this performance so rich is how he navigates the vulnerability, longing, resentment, and swagger. He keeps these emotions like secrets locked away in a chest, yet he also reveals them, slowly, to the reviewer; he, the actor, and we, the viewers, keep that secret as we come to understand everything about him.

All of the actors in Jane Campion’s fine film understand that this is a story of subtext. They know that there is a universe of things they can’t say. So they hide their emotions from everyone else but reveal them to us. For instance, there’s the way Kirsten Dunst picks up the vases of flowers after Phil lights them on fire. She hides her reaction from him and the rest of the men, though she picks them up tersely – which is message enough. We see in her face that this has broken her heart. What she now knows is that Phil destroys beauty. That beauty, she believes, is in her son and so she believes he’s out to destroy them too. Ah, but of course, Kodi Smit-McPhee has a different idea of how this story will go. He knows the game. He has it all worked out in advance, like a chess grandmaster. Phil will never see him coming and Smit-McPhee’s performance is so subtle we don’t catch it either unless we’re paying very close attention.

But it’s ultimately Cumberbatch’s movie as he has created a cinematic icon for all time. That image of him on the horse, as a man who believes he has conquered the wild world. But that wild world will conquer him. 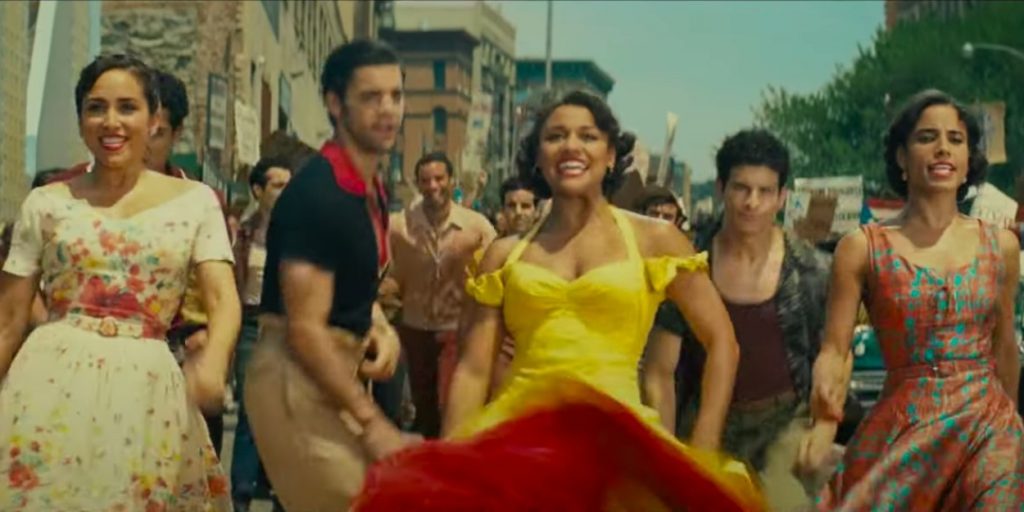 Ariana DeBose — She burns through West Side Story like a hot flame and steals every scene she’s in. It’s the singing, it’s the dancing, it’s the acting, it’s the screen presence. While Spielberg has cast this film perfectly, from Rachel Zegler and Ansel Elgort to the glorious Rita Moreno and scene-stealing Mike Faist, it’s DeBose who stands out, both because she has such a great role and because she has met the challenge of her predecessor. Judi Dench and Ciaran Hinds — You know you’re in good hands with two veterans when Dench and Hinds are on screen. Their acting is smooth as silk, assured, grounded, and funny. Belfast is driven by three generations, first with Buddy (Jude Hill), just starting out in life with optimism, innocence, and goofy charm. Then the parents (Caitriona Balfe and Jamie Dornan), who are still young and passionate — they are the ones tasked with sorting out the mess of their beloved Ireland and are torn up about it. They have to try to save their family, with one foot in the old world and one foot in the new. And then there are the grandparents (Dench and Hinds), who are never leaving Belfast. They navigate the strife with the kind of easy humor old age often brings. These two are a gift for this holiday season, there is no doubt about it. Nothing like watching two complete pros doing what they do best. 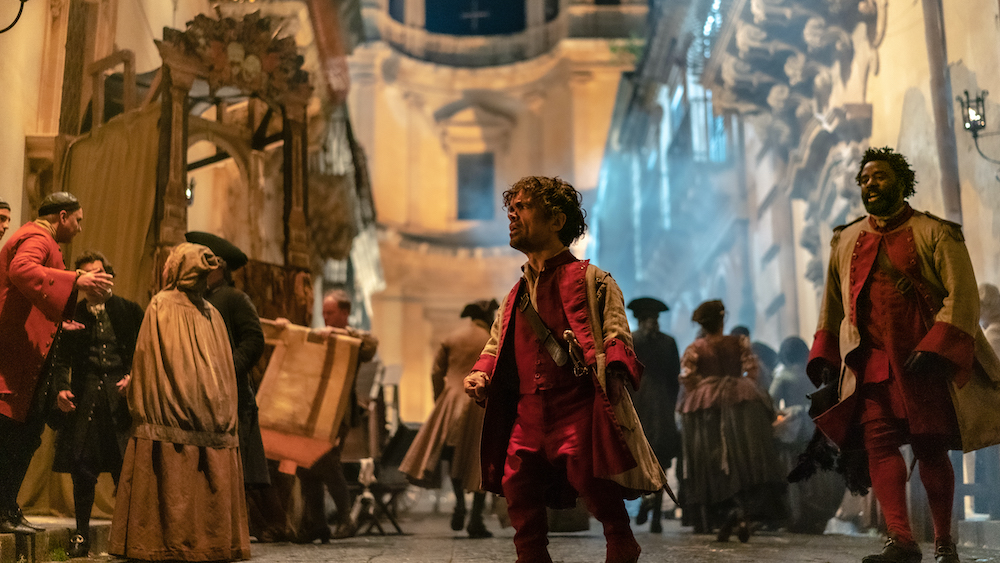 Peter Dinklage — Melting a million hearts is Peter Dinklage as Cyrano, someone trapped in a body that he doesn’t believe is worthy to capture the only heart he wants: that of Roxanne, played by Haley Bennett. Dinklage was the best thing about Game of Thrones, partly because his Tyrion, like Cyrano, holds so much back in his performance. That is his gift as an actor: that he is able to show just how much simmers beneath the surface. But here, he is also singing and sword fighting and yes, falling in love. It’s a wonderful take on an old story that debates whether beauty is who we are or how we look. 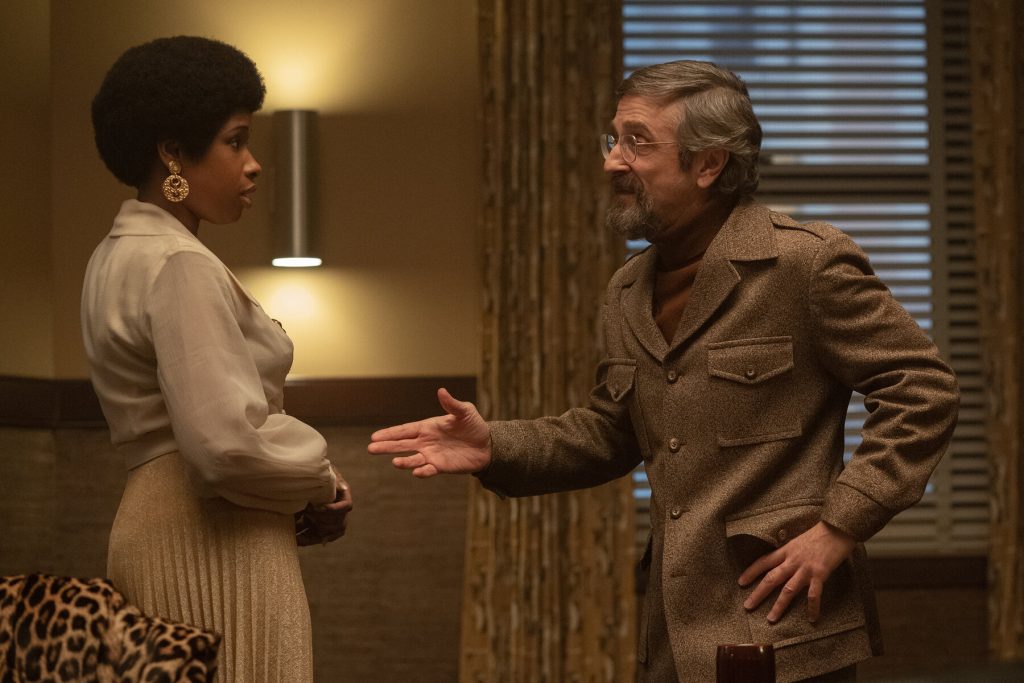 Jennifer Hudson as Aretha Franklin — She wasn’t the first Aretha people saw. Sometimes I think too few people saw her at all, nor the other fine performances in this film, like Forest Whitaker, Marlon Wayans, Kimberly Scott, or Audra McDonald. Navigating Oscar season is rarely about who deserves it and who doesn’t. It’s a popularity contest, only it’s not even Oscar voters we’re talking about — it’s a contest among the people who cover the race, vote on critics’ awards, and lay down the foundation for what the Oscars become. Trust me: I know that it has very little to do with who gave the best performance. If it did, Hudson would very much be a prominent force this year. It’s a conservative portrayal as Franklin, who led an over-protective, sheltered life, but who was also drawn to the wild side with the men in her life. What kept her grounded was her ability to sing. Nothing in her life, no mistakes she made, could ever take that away from her. We watch her move through the beats of her life from rape, to domestic violence, to success as a jazz singer, to someone who dared to want more than that. Through all of it, Hudson never loses her connection to Franklin. It’s in every gesture, every note she sings. It is how she carries her body, how she walks into a room. The entire ensemble is great, but it’s Hudson’s movie. Nicole Kidman and Javier Bardem — Underestimated yet again, Kidman nails Lucille Ball in Being the Ricardos, with her voice, her body, her attitude, and even the two competing Lucys: the TV version and the real-life version. She’s also right on top of the Sorkin dialogue, which is no easy feat. This is a film that needs two strong central roles to bring to life people we’ve known for decades. The other is Javier Bardem, who is (I might say) more charismatic and charming than the real-life Ricky and works better off Kidman’s Lucy. The entire ensemble cast is great in this, with not a weak link in the bunch. Alia Shawcat very nearly steals the whole thing. I loved Kidman’s strength in this, playing someone who really did live life a step ahead of everyone else. 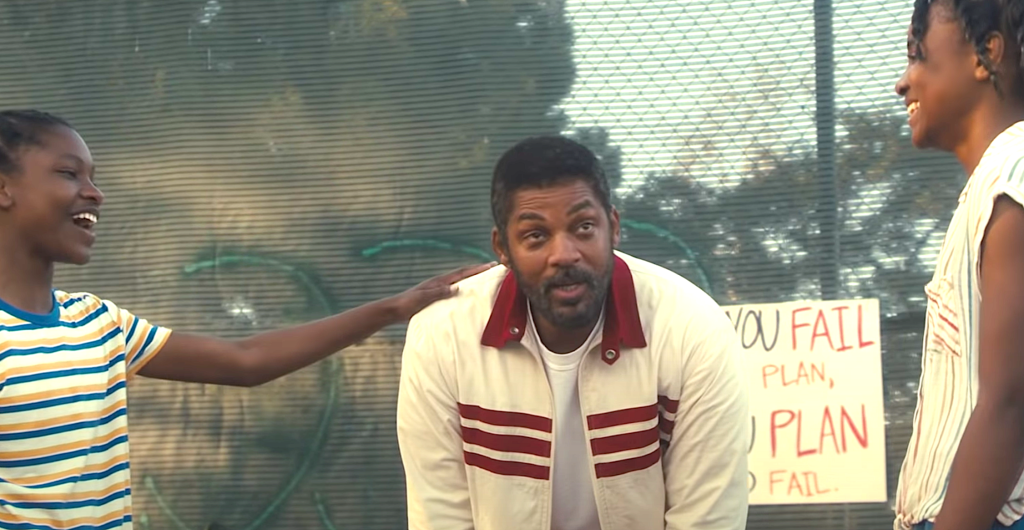 Will Smith —  His own charm works in his favor here as King Richard, the superdad who ushered his daughters into tennis, birthing and nurturing the two legends Venus and Serena Williams. It’s his short shorts, his slightly hunched way of walking, his squinty-eyed delivery, and his self-determination that makes this among the best performances of the year. Smith has been working towards depth like this his whole career. To understand just how good it is, compare it to his performance as Ali. King Richard leans a little more in Smith’s direction than Ali, but there isn’t a minute you’re watching this movie that you think you’re watching Will Smith. He disappears completely into the role and takes us through an important story about someone who could see what other people could not and never let anyone or anything get in his way. Kristen Stewart — Last but certainly not least, the lovely Miss Stewart has at last become the accomplished star and actress her career has always promised. She’s darkly radiant in the best role of her career playing Diana. She nails the posh accent, understands why Diana had such a hard time with being a princess with this royal family, and depicts how she struggled with her desire to be a good mom and enduring a cold husband who had everything he could ever desire but it wasn’t what he wanted. Much of this film is great just because of Stewart: her face, her eyes, her clothes. She is utterly captivating and heartbreaking. She is a big enough star that when you expect you might see her instead of Diana, you don’t. You always see Diana. These two beauties somehow had personalities across the pond and across generations that fused beautifully. Her version of Diana will be hard to top.

Ensembles of the year:

Belfast
CODA
Cruella
In the Heights
The Last Duel
Nightmare Alley
Respect
The Power of the Dog
West Side Story
tick… tick… Boom!