As we say goodbye to 2021 (and perhaps good riddance), it’s time to take a look at where the Oscar race stands right now as we head into 2022. The first thing to remember is that, ordinarily, Oscar voters would be voting right now. While we aren’t quite as traumatized this season as we were last year, key dates, timeframes, and attitudes are still far from normal. In fact, at least where the Oscars are concerned, we’ve reached DEFCON 1.

The Oscars as an institution, and especially as broadcast event, have never been in more dire straits. Last year’s ratings were catastrophic, even when COVID is factored. There is no reason why they couldn’t have put on a better show and attracted more people watch. But too many on the AMPAS board got skittish and decided to portray the Academy in a way that does not accurately reflect their actual makeup (a group that is still 84% white and 68% male), nor has it made much effort to broaden its appeal to the viewers they crave (the general public). Instead, they went full NPR and in so doing alienated almost everyone, including loyal Oscar watchers, in an apparent effort to placate the tiny cabal that drives Film Twitter who refuse to be satisfied. The Oscar producers had good intentions, they did the best they could — but no one looks back at that night and sees it as a success.

To make matters worse, not only are fewer and fewer people watching the Oscars, they seem less and less interested in the prestige movies typically aimed at the Oscar crowd. Many of the nominated movies seem tailor-made to please Academy voters, with little regard for what movie-lovers in the real world would say are “best” of the year.

This year, Omicron hit just as the big Oscar movies dropped, so in the midst of that uncertainty paying customers were few and far between. Turns out the demographic that usually buys tickets to these kinds of movies were too cautious to venture into the (mostly quite safe) theaters, since many of them are the most at risk. So it was a perfect storm to kill off whatever was left of Oscar season, at least in terms of a theater box-office metric. 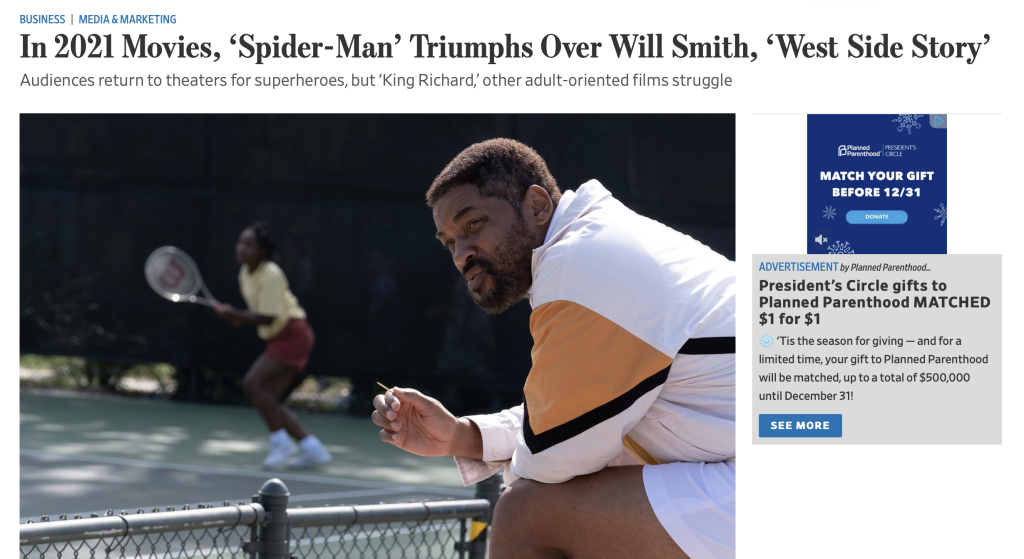 The movies premiered. The critics got their screenings and screeners. The audience didn’t show up to buy tickets. Not only did they not pay to see them in theaters, it’s impossible to know how many are even watching them at home, on streaming. I’m sure there will be plenty of people who excuse this slump, or try to put a positive spin on it, like, “Well they would have turned out if not for COVID and you can’t blame movies for that.” I mean, that rationale sounded good until along came a Spider-Man. Then it was clear that a lot people WILL MOST DEFINITELY come to the movies as long as it’s the kind of movie they can’t resist.

The Oscar industry is essentially humming along as it always has, with the bloggers like me in a tight knit relationship with the studios and publicists, with swag and screeners, with access to celebrities, and the heady whiff of glamor that comes from being among the beautiful people. Anyone lucky enough to rub elbows with Hollywood can basically fake it that they’ve made it.

Most I know who cover this race don’t seem to lament how things have changed. The race as they see it reflects the race that they’ve helped micro-manage, and so they’re fine with it. It’s such a well-oiled machine by now — who wants to bother with the distraction of, you know, concern for ticket-buyers? What do they know anyway? But for some of us who remember the Oscars as a big event, as something that mattered; for those of us who remember when movies mattered more to more people than they do now, when Hollywood mattered, when there was something to it all — the latest phase in the decline of Oscar movies is depressing.

The Oscars are still controlled by the boomers, and they probably aren’t ready to be down for allowing superhero movies in. They’d be much happier to have the whole shebang moved to streaming so it really could be its own isolated oasis, like that private screening room in the Hollywood Hills they rent out for $10K a night. Plush leather seats, nice big screen, panoramic view of the glittering city below. Oh how nice it all is, especially when you’re spearing shrimp next to Margot Robbie.

So why would anyone even want to win an Oscar now? What does it even mean? Well, I suppose when you boil it down, as always, it means status within their peer group. I suppose if you win an Oscar it gives you SOME power, some clout, a way to say we’re worth more than what you are proposing. Or it closes a deal, or it sticks some kind of validation stamp on the work, so it all wasn’t in vain. Is it just power positioning? Probably. But it wasn’t always like this, my friends. I was here when it wasn’t.

I would love it if a rowdy faction of voters went rogue. If just enough of them found a way to break out of the hamster wheel where we watch them scamper every year. But they can’t do that because there are only so many hours in a day and so much time to watch screeners and a ballot that must be filled out. A consensus rules all. If you can manage or control or influence the consensus, you can shape the nominees and the winners.

That is why predicting the Oscars has not been hard recently as it used to be. There can still be some upsets here and there. I am hoping we see more of them.

None of the problems the Oscars are facing can be solved right this minute — the show will go on regardless. Whether more people will watch or not will depend on whether the Oscars can remember who the movies are for in the first place: the public. Not the bloggers, not the critics, not even the industry. The public. So yes, Spider-Man and Dune, two rousing achievements, are both no-brainers. Imagine two whole generations out there, Millennials and Gen-Z, making the connection that the Academy picked a movie they liked and saw. That matters. A few hundred people can make this happen by putting this movie at number one. Help us help you.

Let’s go through the Frontrunners and the Challengers as we see them today, heading out of 2021 and into the new year.

Best Picture
Frontrunner: Belfast — there still isn’t another movie that is as well-liked across the board as Belfast, which is a warm film full of good cheer that will be tough to beat.
Challengers: The Power of the Dog is still a strong contender, and I’m not ready to count out King Richard or West Side Story.
Potential Upset: Watch the SAG ensemble nod for a clue. What movie might actors like?

Best Director
Frontrunner: Jane Campion, The Power of the Dog — it seems like it’s Campion’s to lose after she won Venice. She didn’t win for The Piano and is overdue. It makes sense that the almost-Best Picture winner will win Best Director.
Challengers: Kenneth Branagh, Belfast obviously
Potential Upset: Everyone from Paul Thomas Anderson for Licorice Pizza, to Denis Villeneuve for Dune

Best Actor
Frontrunner: Will Smith, King Richard — while there are plenty of people who see it going a different way based mostly on chatter, all it will take is for Smith to win one major award and it will start to feel more like a lock.
Challengers: Benedict Cumberbatch, The Power of the Dog
Potential Upset: Andrew Garfield, tick, tick… Boom!; Peter Dinklage, Cyrano

Adapted Screenplay
Frontrunner: The Power of the Dog
Challengers: The Lost Daughter, CODA

And here are a few spitball picks that should not be paid attention to in any way except for fun:

Cinematography — Dune vs. Belfast vs. The Power of the Dog vs. Nightmare Alley
Editing — West Side Story vs. Belfast
Score — Power of the Dog vs. Dune vs. Don’t Look Up
Production Design — Dune vs. Nightmare Alley
Visual Effects — Spider-Man: No Way Home vs. Dune
Doc Feature — Summer of Soul vs. The Rescue
Animated — Encanto vs. Luca vs. Flee
International — Drive My Car vs. Hand of God vs. The Worst Person in the World vs. A Hero
Sound — Spider-Man: No Way Home vs. Dune vs. West Side Story