Yes, Spider-Man Should Be Nominated for Best Picture – It’s a No-Brainer

Yes, Spider-Man: No Way Home should be nominated for Best Picture. To argue otherwise is like trying to argue that we should stick to VHS tapes for screeners. Or that we should shun wi-fi and stick to dial-up modems. You can’t fight cultural evolution. You only have two choices: adapt or die.

I love the scene in The Insider where Al Pacino is trying to get his story published about Big Tobacco’s effort to cover up evidence that smoking causes cancer. It’s one of those scenes that can apply so liberally across the board. Here, I would say the “cat, totally out of the bag and you’re still debating” scene would reflect the fact that the Oscars couldn’t possibly be in a worse position heading into this year’s ceremony.

Granted, it isn’t a guarantee that many more people will watch if Spider-Man: No Way Home is nominated. Probably they won’t, because it’s hard to woo viewers back to events they gave up on. The Oscars have been slowly bleeding audiences for the last ten years. But it’s gotten much worse in the last five as the country became extremely partisan and the Academy — especially by way of its most outspoken members — made no secret about where their loyalties lie. It wasn’t that they had to show themselves as non-partisan, but to go full-blown Democratic National Convention each and every time was off-putting, even to some liberals.

But that’s not the reason to nominate Spider-Man. The reason to nominate it is that it deserves to be nominated. It is that rare organic entry that lands in the Oscar race every so often. I’ve written about this many times but let’s go over it again. The Oscars are a pre-planned, well-oiled machine. The publicists target certain movies months in advance that they think the Oscar voters will like and they work virtually all year long to get those films nominated. To do that, they have to court people like me with parties, swag, and interviews, free screenings — you get the idea. Think lobbyists in Washington.

If the pundits continue to predict the same movies over and over again they build a consensus without any organic movement necessary. What is organic movement? It’s when audiences spontaneously love a great movie, for instance.

This used to happen a lot. It rarely happens anymore. Had anyone at Sony had an idea of just how AMAZING this Spider-Man would be, they have might have gotten their Oscar publicists on it earlier. But as it is, it stands on its own as the one true organic HIT that has been released this year. With ten nominees, to ignore this movie is ASSISTED SUICIDE for the Academy.

Or to quote Owen Gleiberman, writing for Variety, after explaining that the film isn’t his cup of tea but he still thinks it should be nominated:

Ah yes, the ancient logic of middlebrow Oscar snobbery. In the past, the members of the Motion Picture Academy have considered superhero movies to be entertainment, not art, and the Oscars are supposed to be about art. We’ve been through this debate several tedious times, most spectacularly in 2008, when “The Dark Knight,” the greatest superhero movie ever made, couldn’t finagle a best picture nomination.

And then he states what anyone who doesn’t live way up inside the bubble of Twitter knows already:

Now, though, there’s a larger reason to nominate “Spider-Man: No Way Home.” The Oscars are on life support, or at least they’re heading there. They need mainstream cred; going forward, it’s nothing less than the oxygen that’s going to allow them to survive.

And he closes it with this magnificent paragraph:

This year, would it really be such an unspeakable vulgarity for the Oscar slate to include “Spider-Man: No Way Home”? Not as a token mainstream gesture but because it’s a film that honestly meant something to the larger public. Why has this become such an insane idea? What’s actually insane is leaving a movie like that one out of the mix. If the Oscars want a future, it would be a shrewd strategy for them to not inflict the death of a thousand cuts on themselves by using the dagger of elitism.

The whole reason there are ten nominations in Best Picture, which was intended to help them to expand and hopefully enhance their brand, is to include “genre movies.” Why on earth would they not nominate a genre movie that could very well become the highest-grossing film of all time, or one of them, in the midst of a crushing global pandemic? How out-of-touch do people have to be to think this isn’t one of the best films of the year? 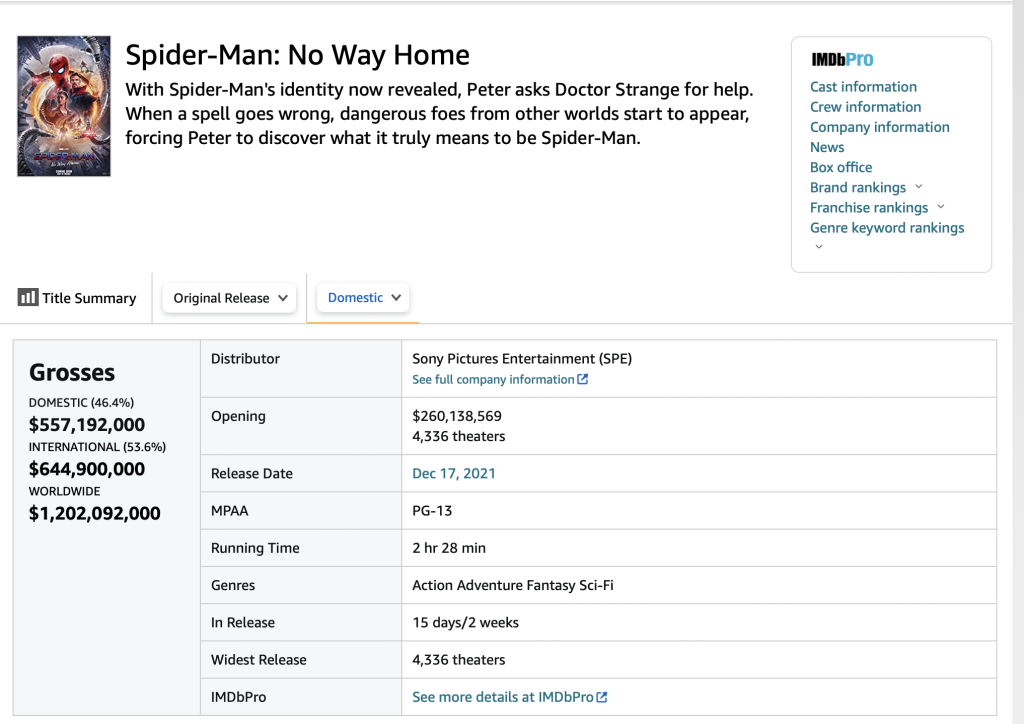 You can’t look to Film Twitter to understand this. They are happy with the way things are and why shouldn’t they be? They are treated to the most spectacular experiences of their (our) lifetimes. Not only do we get to be up close and personal with the best and the brightest, but we never have to pay a single dime for anything. We are the aristocracy of film coverage. So, other than help negotiate Oscars for people who want them, what is the purpose of any of it? Seriously, what is the purpose? What is the purpose of the BAFTA re-ordering their nominees to “select” more inclusive nominees? What purpose does that serve? It doesn’t build any momentum for the people who are selected. They are merely stickers to put on their box that says, “See, we actually are inclusive and diverse.” No, you aren’t. Not if you have to override the will of your own membership with outside curators. That isn’t what this is.

The Oscars show the films that supposedly represent their tastes, and the image they wish to project. But the general public, the people movies are ACTUALLY FOR, are often left scratching their heads. The disconnect is only getting bigger. The Oscars are systematically isolating themselves from the broader country and industry. This is not a good thing.  Awarding a movie like Spider-Man also raises the bar for the tent pole films to aim that high, to make a movie that good. It is possible to not totally bottom out on the worst films just to make a buck. The Oscars can be the group that says they understand the world has changed, and the film industry has changed, but they still think quality matters. They still can reward the highest achievements of the year, even if some of those exist outside of their comfort zone.

Their counter-argument is that they believe if they endorse this movie that they no longer care about the fight to make art. Emma Stone was made to be the villain in Birdman and we’re meant to mourn the loss of great art in the film.

I have been watching the Oscar race since 1999. Every month of every year since then. I was here when the Oscars were still a popular event. I remember getting excited about them as Spring began in Los Angeles. The jasmine was blooming. The town was readying for the pomp and circumstance. Everyone was excited about them. As the years wore on, things started to change. The Oscars pushed their date back, which meant the race was put in the hands of film festivals and bloggers like me. At the same time, people like me tried to shape the race by what we thought Oscar voters would go for. That meant only a certain kind of movie would even be considered.

Every so often, there would be a popular crossover – like Argo, for instance. But in general, the “Oscar movie” came to represent something very serious, often very depressing, and something that not only did few people watch but no one even remembers after the year ends. So many movies that the Oscars ignored went on to make their mark in culture in a big way. Two that come to mind off the bat would be Gone Girl and the Girl with the Dragon Tattoo. Oscar passed them by, stupidly, based on their own insular rules and ignoring how popular the films were with the public.

That didn’t use to be the case. If Jaws was a hit, the Oscars cared. Even if Fatal Attraction, Love Story, or the Towering Inferno weren’t exactly critical darlings, they were hits and that mattered. They made a cultural impact. They were remembered. The Oscars noticed.

Many will say that Hollywood gave itself over to superhero tent pole franchise movies to appeal to ticket-buyers in China and the lucrative international market. I can’t argue with that. But so what? They are not that different from other genres that were popular at certain points in time, like musicals or westerns. They seem less original, more repetitive, and branded. I agree. But the clock has run out. Now it’s time to change. It’s time to award the best of the year and it’s hard to argue that Spider-Man: No Way Home isn’t one of the best Hollywood efforts of the year.

What will it take? Well, all it needs is roughly two or three hundred Academy voters to put Spider-Man: No Way Home in the number one spot — voters in the Sound or Editing or Animation or Producing branch to say, “I’m going to do my part to save the Oscars and save the industry” — and then it has a fighting chance.

I don’t think the Oscars can survive or should survive if they continue to serve a small group of elites who never have to pay a dime to see any of these movies. With ten nominees, there should be room to include all kinds of movies — genre movies, animated, documentaries and international entries. It can be an extremely competitive category once we figure out that it’s a much bigger world than the one we try to micro-manage from October to January.

Best Actress 2022 - The Standouts in a Competitive Year