Best Actor – How the Globes and SAG Make the Nominations (Mostly)

The standout performances this year in the Best Actor category are driving the Best Picture race, at least in terms of what might get nominated. Adam McKay’s Don’t Look Up appears to be gathering momentum at exactly the right time: right now. Which could mean Leonardo DiCaprio is one of the Musical/Comedy Globes nominees that makes it to the Big Show. In general, one or two names at the most come out of that category.

Here is how the Globes categories were filled this year:

It looks like there are three strong contenders from the Musical/Comedy category in DiCaprio, Andrew Garfield for tick, tick… Boom!, and Peter Dinklage for Cyrano. The two strongest Best Picture contenders here would be Don’t Look Up and Licorice Pizza, with the next in line being tick, tick… Boom!.

We don’t have much intel on any of this because we have no audiences, so to speak. We have critics. We have bloggers. We have Film Twitter. The whole game has been moving in this direction for quite some time anyway, but it’s weird to have it all gone. At any rate, all we know are which films the people who cover awards like best. We have nothing else to go on, not until the Screen Actors Guild announces their nominees on the 12th.

If you ask the pundits to name the Best Actor top five, most will include the following:

That might be our top five, but the Screen Actors Guild might push Being the Ricardos into the race in a way the critics or bloggers can’t see, which would mean Javier Bardem is nominated alongside Nicole Kidman, sweeping the film into the Best Picture race. Most aren’t predicting it to go that way because they don’t yet have the intel from the actors, which they need. Remember: actors drive the Academy. What they think matters. A lot.

There are other names that aren’t on the radar of the Globes that the Screen Actors Guild, or even the Academy, could pluck from obscurity and get into the race. It’s rare, but it happens that an actor is nominated by the Academy without having either a Globe or a SAG nod:

Outliers like these can either get a boost if the BAFTA folks push a name into the race or because voters like a particular performance.

Nicolas Cage in Pig would be one name. Bradley Cooper in Nightmare Alley would be another. And even Mahershala Ali in Swan Song could make it into SAG and then the Oscars as a name no one is really factoring right now. It is certainly not outside the realm of possibility — Ali is a two-time Oscar winner, after all.

Because we’re predicting in a vacuum, we don’t really know ultimately what the final five will be. People do tend to sort of vote the consensus. I don’t how that works, but it just does, give or take a name or two. Given the buzz I see for Don’t Look Up, I might expect things to tip a little in DiCaprio’s direction,
especially given Netflix’s and DiCaprio’s efforts to lean into the film’s climate change message rather than apologize for it. DiCaprio is sending out a link for people to volunteer and join the cause. Adam McKay is also sending out the message on social media.

It is certainly easy to sink into despair when we look at the enormity of the problem, but action is really the only solution to frustration, so why not? Sit on the couch and stare at the wall or make better use of your time are really the two choices at hand, and if that’s the only message people take from Don’t Look Up, that is not a bad message at all.

Star power combined with social purpose combined with a strong Best Picture contender tells me DiCaprio probably has his nomination in the bag.

I expect (though I don’t know for sure) that Don’t Look Up COULD do well with the SAG awards. Is DiCaprio the only nominee from the movie? Does Mark Rylance get in there? Jennifer Lawrence? Meryl Streep? I guess we’ll have to wait and see on that. For ensemble, it seems like a no-brainer, eh?

Nicolas Cage, in some sense, has never been better than he is in Pig. He’s always good, of course, but the absurdity around his persona and some of his over-the-top work distract from what a good actor he really is. Pig is a reminder of that. In its own way, it is not that far from Don’t Look Up. It was a hard film for me to watch, given my own concern for and emotional investment in pigs — but the point the film makes is that it’s just as easy to get attached to a smart mammal like a pig as it is a dog and its place in your heart is as permanent. Cage certainly has support among critics for his work, but to get in he would have bump one of the four contenders on tap right now and that is not going to be easy.

Many on Twitter believe that Peter Dinklage will be dropped because they don’t think Cyrano has as much Best Picture support, but I would argue that it’s tick, tick… Boom! that could be slightly overestimated at the moment. We know nothing so a lot of this is casual speculation. Garfield’s performance is fully realized, as is Dinklage’s, and both are in a musical. It just will probably come down to which actor and which performance and which MOVIE is most beloved.

As for the win, we’re still looking at Benedict Cumberbatch giving his career-best performance in The Power of the Dog vs. Will Smith in HIS career-best performance in King Richard. Both are in (at least they seem like they are in) strong Best Picture contenders. Right now, it is a toss-up between the two. I would find this, personally, a really difficult choice as both of these performances are great in different ways. I was haunted by Cumberbatch, whose portrayal as Phil Burbank is one for the ages. I was moved by King Richard Williams and his devotion to his daughters. It is one of those years where there should be two prizes for the win. Alas, there can be only one.

Here are the Best Actor charts. 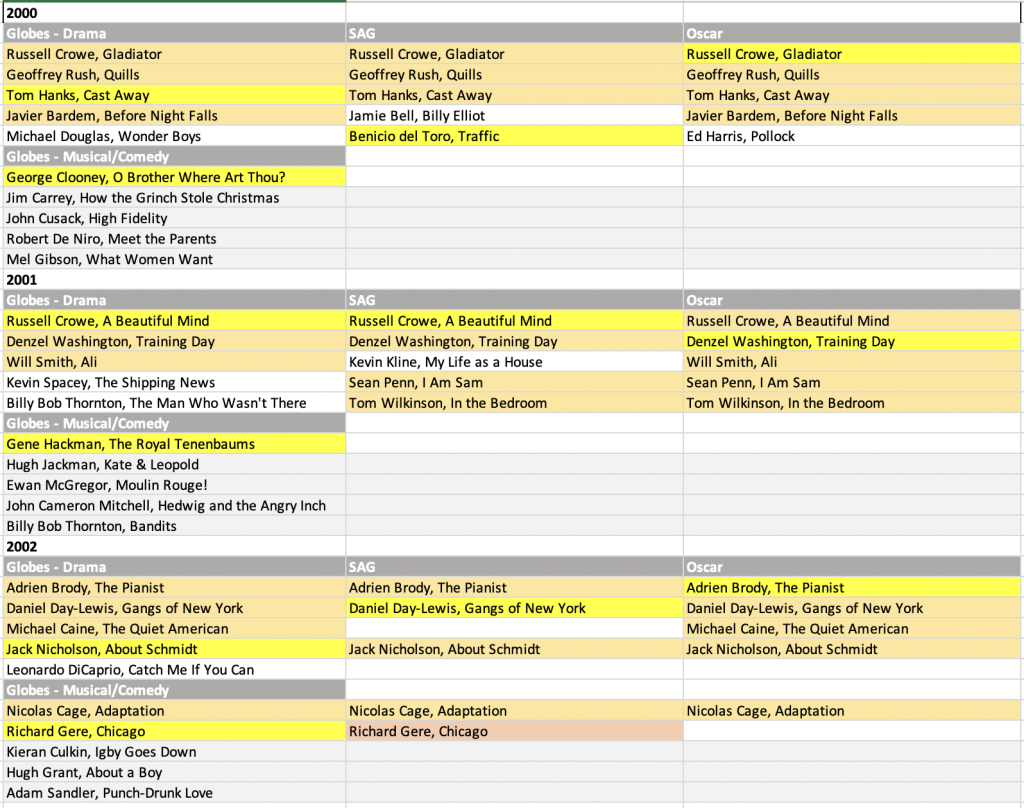 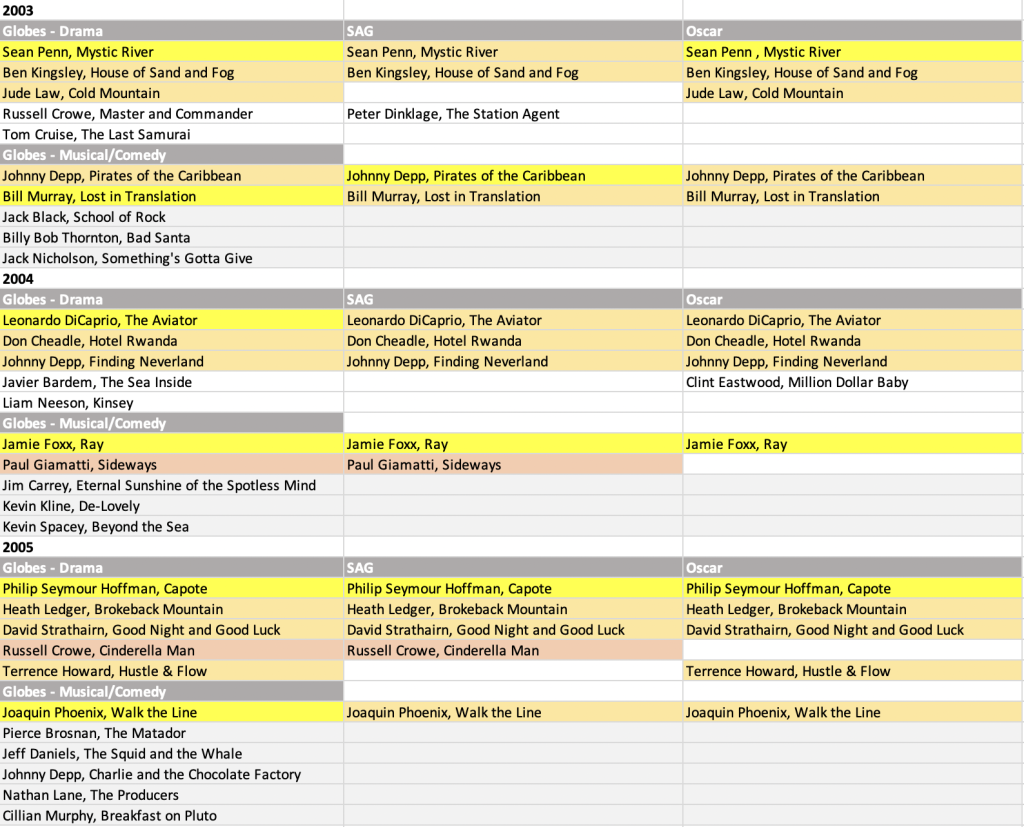 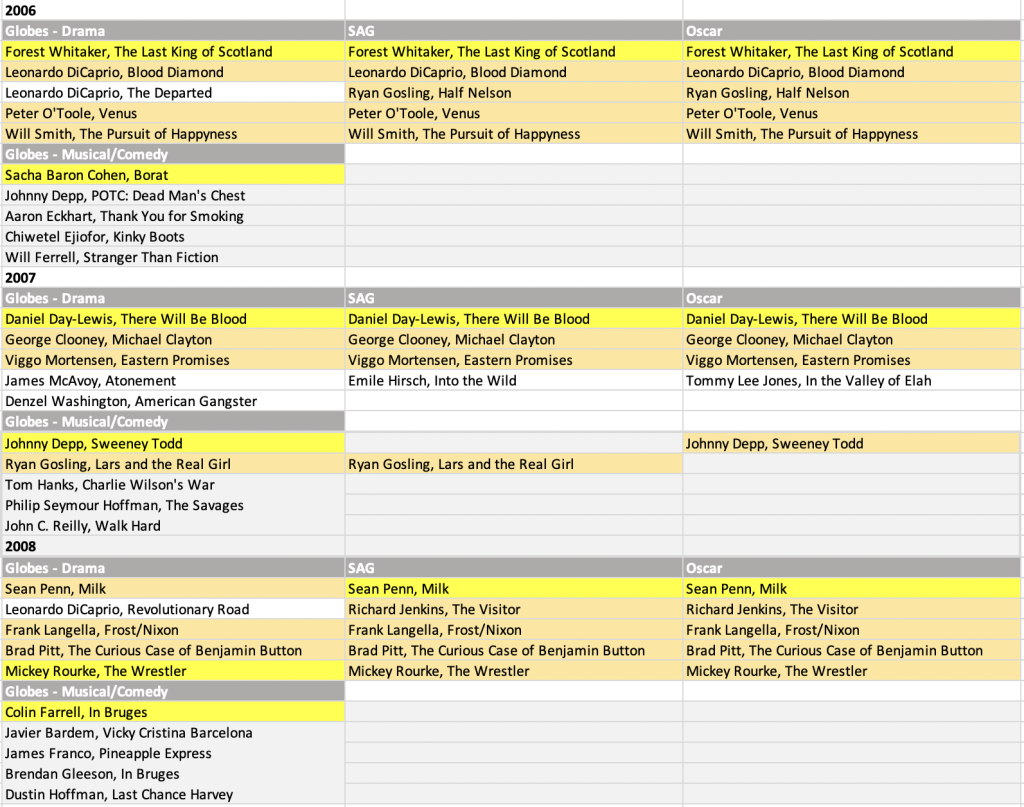 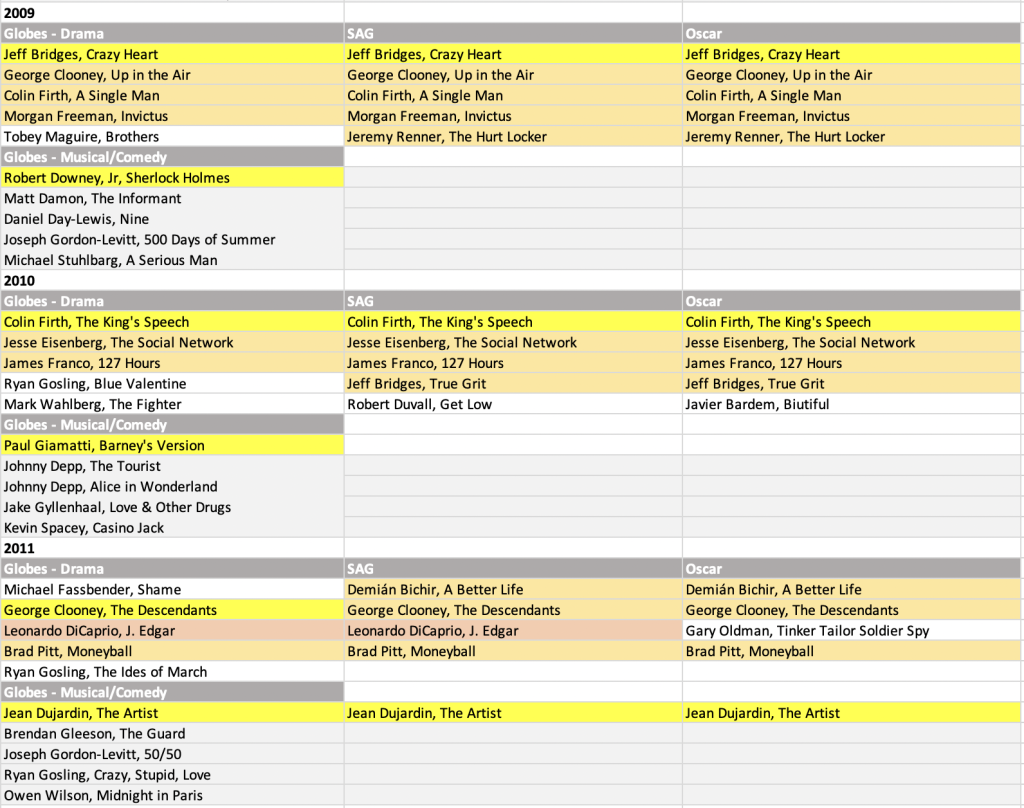 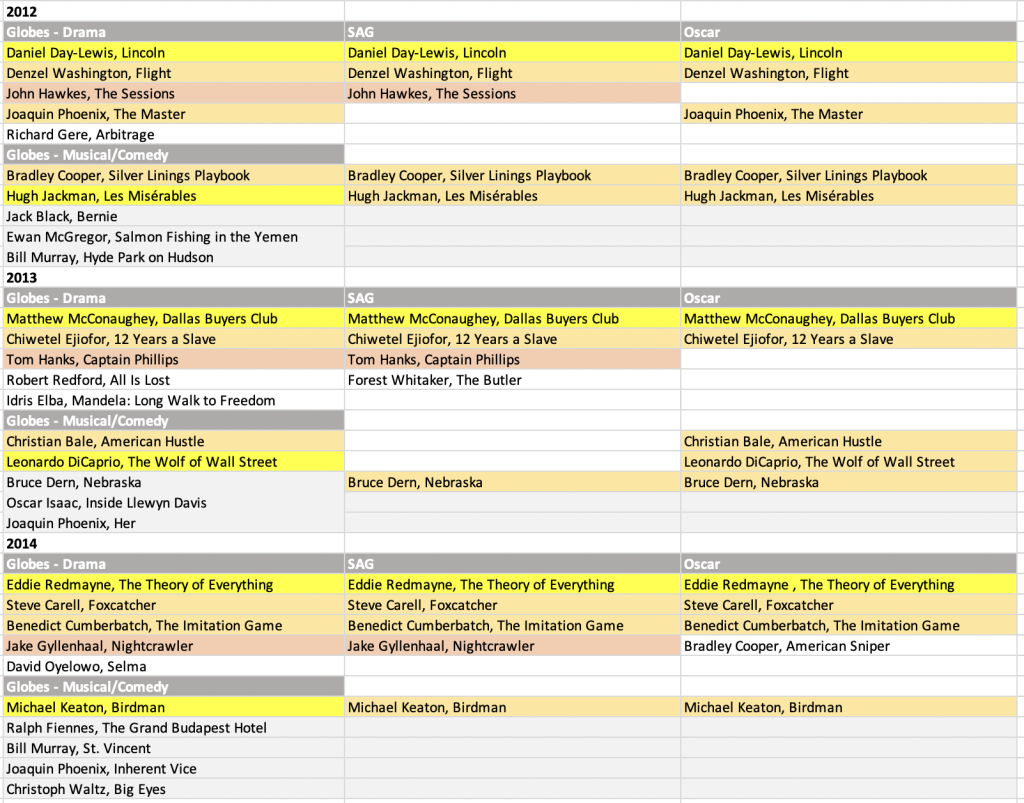 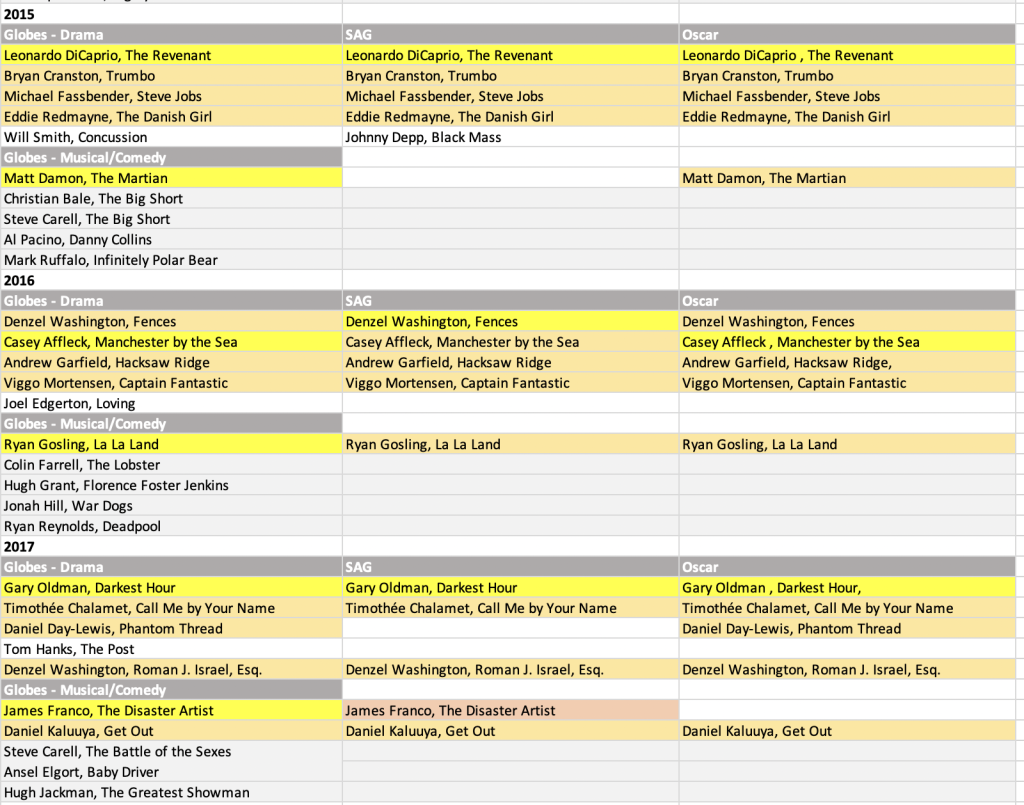 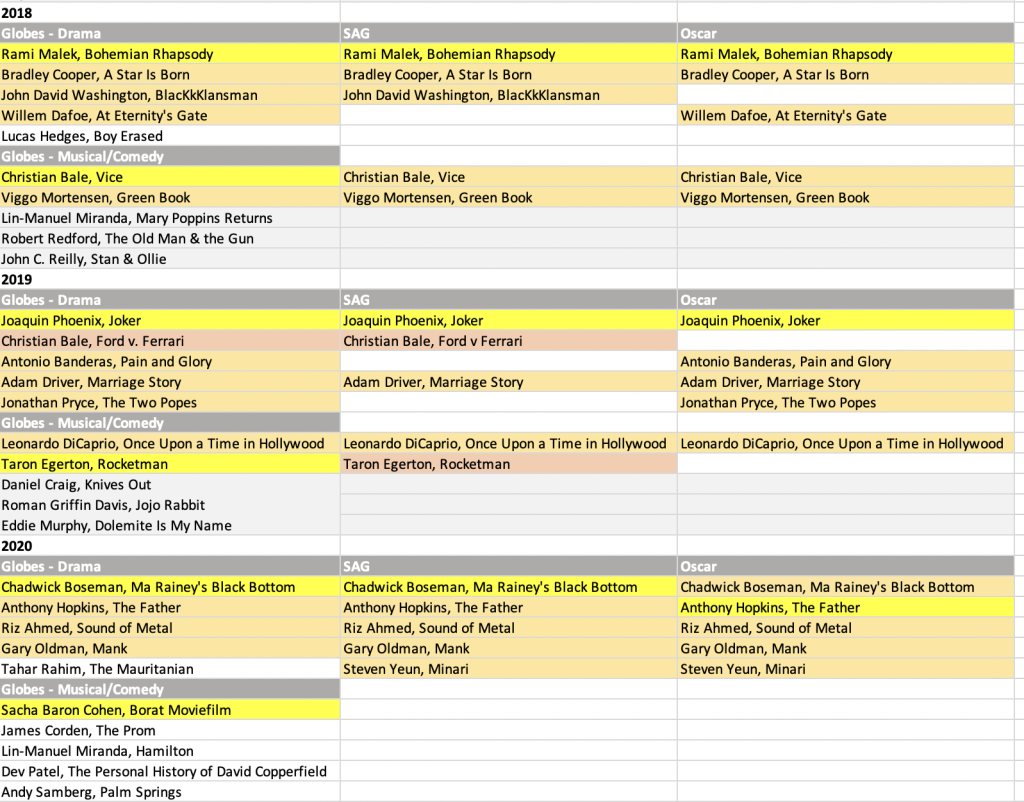 Podcast: Kirsten Dunst on Rose, Motherhood, and Descending into Alcoholism in 'The Power of the Dog'