"This isn't a design about sitcoms. It is not a design about the MCU. It's all these different elements. It is a unified visual world, which is in support of this really amazing story."

Mark Worthington’s 24 credits as a production designer span some of the most influential TV projects of the last decades —Lost, Ugly Betty, American Horror Story, 2019’s Watchmen—earning him 8 Emmy nominations along the way.

It was his long-time friendship with director Matt Shakman that brought Worthington to his latest work, the Disney+ limited series WandaVision. Worthington’s job was to create a S.W.O.R.D. basecamp in the ‘real world’ and recreate classic sitcoms through various eras for Wanda’s utopian bubble of all-American family life.

Except the sets weren’t recreations. Not exactly.

These were sets created from Wanda’s memory, designed to envelop her in the happy memories of her sitcom-loving childhood as she delays the reality of needing to come to terms with Vision’s death. Worthington’s production design is jaw-dropping. Each design and every decision has a purpose—admirable for it’s attention to detail and massive scope [seven decades!]. Using story and the trauma and grief that reverberates through the show to dictate his designs, Worthington weaved together TV history with the larger Marvel world. The result is a visual treat for TV aficionados and novices alike. WandaVision is far and away, the most ambitious and Marvel-ously crafted MCU entry thus far.

Read more of our interview with Mark Worthington below:

Awards Daily: WandaVision marks your first foray into the Marvel world. What was the experience like for you? Did you feel as though you had the freedom to explore versus needing to stay in the already-established visual world of the MCU?

Mark Worthington: It was extremely collaborative. Kevin [Feige], in particular, is very specific about the things that he thinks are important. He is so immersed in the MCU, and he knows it so well that he understands what the audience is interested in, so that insight is really valuable. There is no book like, ‘Here is the cannon,’ and you must do these things.’ We were interested in expanding the visual world of the show. In particular to this story, our MCU side is what we call the pop-up base, which is a temporary S.W.O.R.D. base that can be used for disaster response. It is meant to look like something you can haul out and set up quickly on site. In that sense, it is different than a lot of what you have seen in the MCU.

We looked at things like a number of films that have that kind of base in it. I always like to say Marvel is like an indie film company that just happens to make 250-million-dollar projects. [Laughs] They are really involved. There is no sense of distance. Like, here are the suits. Even if they are creative executives, sometimes you are very distant from that group of people in a given project. That wasn’t the case at all with Marvel, and I love that. They are not dictating anything, but they are there as collaborators, and they have really good ideas that really meshed, I think, beautifully and really contributed a lot to why the show is as good as it is. 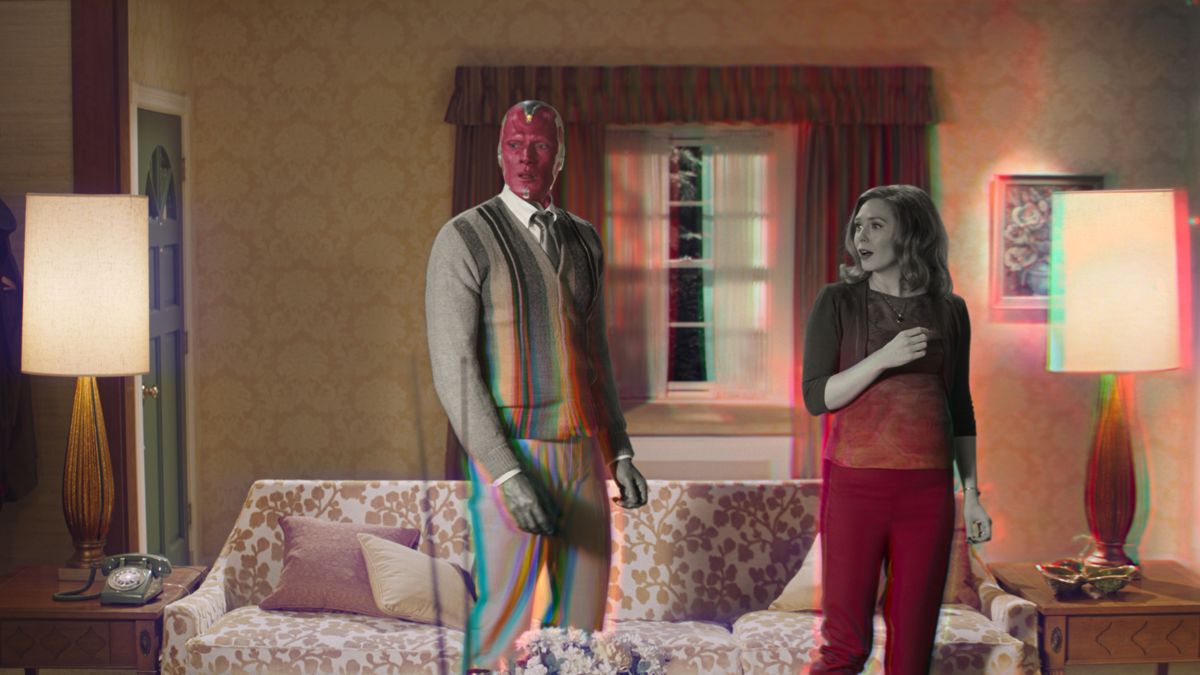 AD: Something you have spoken about in terms of all the sitcoms you drew inspiration from is that you never wanted to replicate anything. Can you talk me through creating a visual palette that is parallel and pays homage without copying? What was that thought process?

MW: I think the primary driver of how we approached that is the storyline. Sitcoms and the sitcom world is created in response to grief and trauma. Her whole story line up to that point has been one of loss. She finally gets to a breaking point with the loss of Vision, and it puts her in this state where she creates this whole sitcom world out of her own memory. As we discover, in the penultimate episode, we see her with her family as a kid watching sitcoms, so we know that she loved that as a kid and that it represented a time before the pain that she is now in a state of denial about. The show has so many themes— grief, PTSD, and denial. One of the great themes and ideas is memory, Wanda’s memory. The sitcoms have to be inflected by the fact that this can’t be a copy because it is coming out of memory. That drives the motive. That is what that is about to me. It’s got to be close. You need to recognize it. You need to be comfortable with it. You need to feel you are in it. But you are also in her memory. You come to understand that as it goes on, so there is a subtly there and a necessity that really drove that, which was a really great guiding light for how to approach doing those during the period sitcoms. But, it was all character-based, all story-based.

AD: It is interesting because you have spoken about the idea of planting Easter eggs. Does the same concept apply, that maybe these visual cues are things that remind her of that Marvel world that she is trying to forget?

MW: There are easter eggs if you will, that are scripted; that are part of the story. That drive the story, that drive her character. I think we know what those are. Then there is the stuff that is more environmental. That isn’t about a specific story point. Those are not scripted. Those are sort of easter eggs of opportunity if you will. Like, ‘Oh, we got a bottle of wine that references House of M, for example, which was in the trailers, which is fantastic. There is stuff like that. Russell Bobbitt, our prop master, has been immersed in the MCU since its inception, basically. Russell, is the resident expert of that stuff. There is a lot of stuff with the props that he could bring to me and bring to [director] Matt Shakman and say, ‘Oh I was thinking about this, and we could put this little thing in there, that would be really fun.’ Those little bits—even the magic chest that Wanda disappears into during the magic show has a little bit of imagery there that Russell helped with. He would come up with stuff. Matt would come up with stuff. [Writer] Jac Schaeffer would come up with stuff. Kevin suggested things. They are not just arbitrary signs like, ‘Lets just keep this in there so the fans have something to look at.’ Almost always, they are related to some story point or some aspect of it.

For example, in the second episode, the 60’s episode, there is wallpaper in one of the sitcoms that is an Italian landscape. I thought, “Hm, there is an opportunity both to reference the sitcom but also reference her past.” It is actually a landscape of Sokovia and two buildings in Sokovia. It is as if these things, the memory of her real world and her real past, can’t be suppressed entirely, and so it expresses itself in the sitcom world in these ways. No, it’s not an Italian landscape, its Sokovia. Stuff like that. It is organic in a nice way. As you are going through the story, you are thinking about these spaces; you are coming up with these ideas as you see the opportunities. It is really fun.

AD: I came across an interview where you talked about being first approached for WandaVision. You had some misgivings about what you thought that a Marvel project would be. I wonder what misconceptions you had coming in? 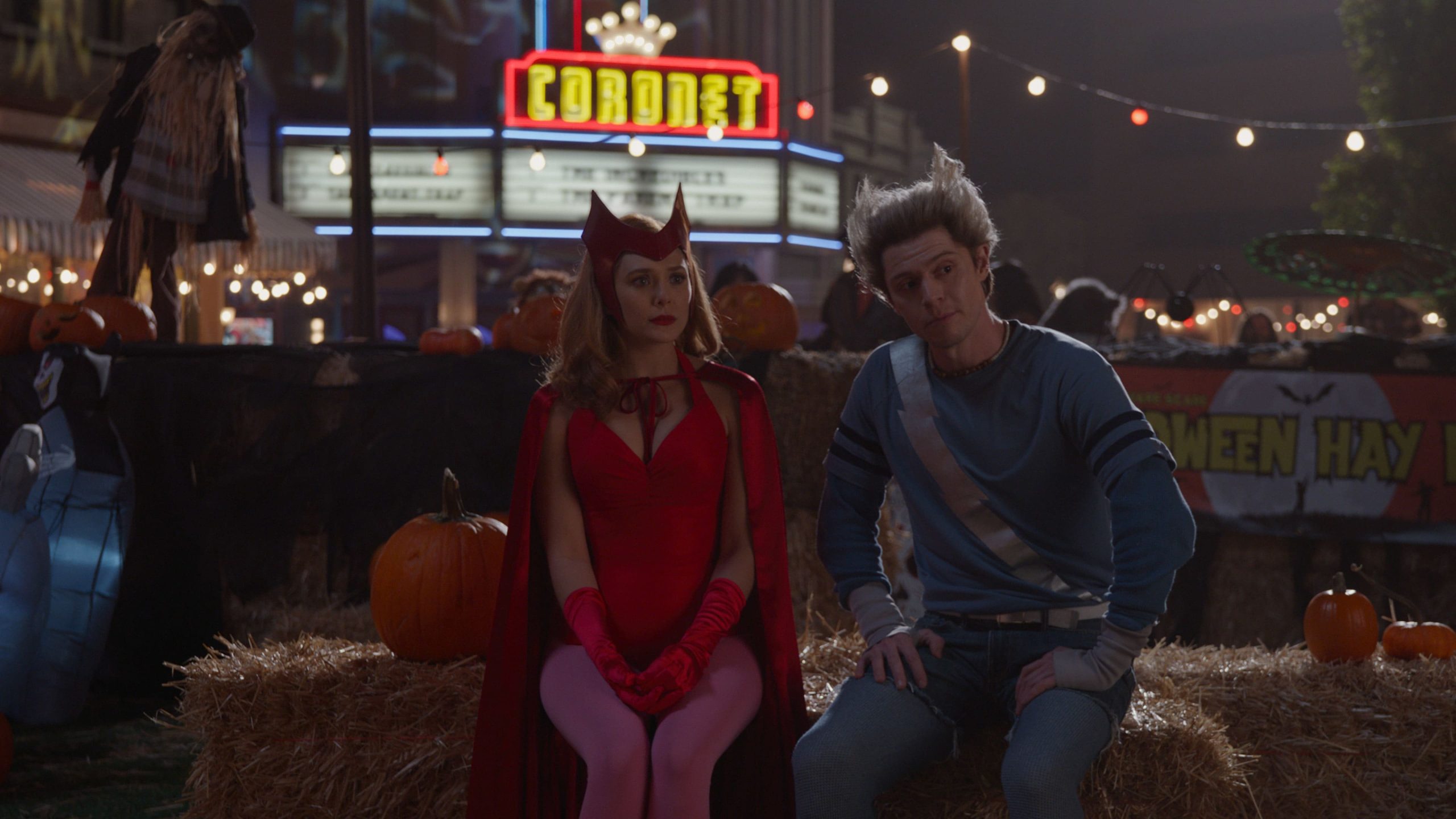 MW: You know, I don’t know if it was misgivings or hesitancy. I didn’t know the Marvel world well coming in. I’ve known Matt for fifteen years, he brought me on. I am ultimately more of a  Star Trek person, actually. [Laughs]. It was kind of like, “Huh, what is this world?” I made some assumptions about the MCU that were erroneous, in a way, because I hadn’t seen as much that I should have. Then going back to look at it, you begin to realize the scale of the arc, and the themes and ideas about it, so there was that. Also, just having Matt describe it to me. He did a really brilliant synopsis in the phone call when he first asked me to do it. I was like, ‘Wow, this sounds amazing.’ It starts with narrative, story, and character, which is always what I am most interested in, and the idea of this examination of grief and this PTSD Wanda is going through and the state of denial she is in. Because she is an Avenger and that because she has these amazing Marvel powers, she can create this huge world in response to her own trauma. That is wild. That is what these speculative worlds can do. It is amazing.

AD: If I could ask you the classic question of the most challenging production design aspect? Or if is there a particular piece that you want to draw attention to? I would love to know.

MW:  Interesting. There is no one thing in the show that I point to and say, ‘Ooo, look at that, look at that,’ which speaks to the strength of the story, and the design, and response to the story. The reason I love this project, almost more than anything I have ever done, is that you can’t pick it apart. You pull on one thread, take it out, and the whole thing falls. It is a unified piece, and I love that. The design, the story, and the character\ arcs are one thing. You have to see it as a totality. In other words, this isn’t a design about sitcoms. It is not a design about the MCU, you know. It’s all these different elements. It is a unified visual world, which is in support of this really amazing story. That is what is, to me, so beautiful about it.

AD: Mark, your work is so iconic. The Lost Pilot, I could talk with you about that for two hours!

AD: How does WandaVision tie into the arc of your career?

MW: I hate to use the world culmination; that’s terrible. [Laughs] That signals the end to something. But, WandaVision does bring together, in an interesting way, these different elements of things I’ve worked on. In other words, I have worked on period pieces, that’s in there, right. I have worked on action, that’s in there. I have worked with horror. There is a horror aspect there with Agatha’s (Kathryn Hahn) story. The science-fiction aspect, obviously, which I have also done. I have been super lucky in my career not to be pigeon-holed in terms of genre or type. I have been able to swing wide and do all kinds of things from Star Trek, to American Horror Story, to Ugly Betty, to Lost, to Watchmen (2019). A lot of the DNA of different genres is in WandaVision, so it was amazing to bring all that previous experience to bear to a project in which all those elements exist. That was really lovely and fun.