Five Ways the Academy Can Boost Ratings and Survive Twitter

Apparently, the Academy will indeed have a host. This according to Kyle Buchanan, who announced it on Twitter. We know the game well enough by now to understand how it will go. Whomever they choose, it will be bandied about on Twitter, think pieces will bloom all over the internet, and hysteria will mount. Some can survive it, most can’t. 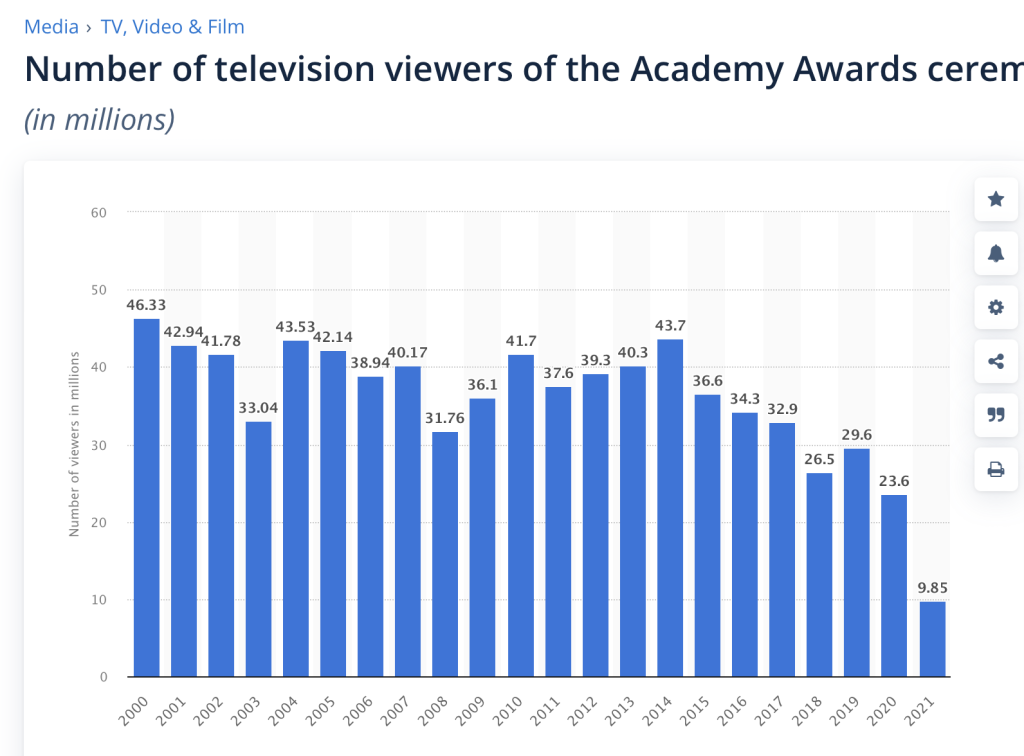 Granted, last year’s debacle was spectacularly bad. They tried. They really did. But it was just a disaster all the way around. The worst part of it, I thought, was the palpable “white guilt” evident in almost every speech, with every person in front of the camera, with all of their nominations — and after all of that, they still denied Chadwick Boseman his posthumous Best Actor win, even if Anthony Hopkins was surely deserving. There was just a whiff of artificiality about all of it, as there is with almost everything Hollywood puts out now. They want to be thought of as good people and somehow that has now translated to becoming most “Woke.” It is a slow-moving tragedy that has all but killed off what’s left of the once-thriving industry, not because marginalized groups have demanded a seat at the table, but because of the pandering by the power elite who are desperately trying to salvage their own images.

Over on Bari Weiss’ Substack, a brave piece of journalism appeared in a town where investigative journalism like this no longer exists. The fear is too palpable. We are most definitely in the midst of a kind of “Woke Scare” that has its fist wrapped around the balls of Hollywood for quite some time. It is a good piece — a tragic piece, but a must-read. In it, the following paragraph:

They were scared of what was happening. The fear, one prominent director said in an email, is “the audience stops trusting us. They begin to see us as a community twisting ourselves into a pretzel to make every movie as woke as possible, every relationship mixed racially, every character sexually fluid, and they decide that we are telling stories set in a fantasyland instead of a world they know and live in. If that happens, and they decide to throw themselves instead into video games 24/7, we will lose them.”

We’re already there. It might satisfy Twitter to check the boxes, but it’s tuned out the majority. Not only are many put off by Hollywood’s content, worrying it might contain some political directive (even if none exists), but the Oscars themselves have become a kind of convention for political activism and only one kind. They assume their entire audience agrees with them, and worse, that there is something wrong with them if they don’t. The Oscars used to understand that this was a country full of competing ideologies — not just one. Maybe it’s time to bring some of that energy back.

Either which way, here are five pieces of advice to help them navigate this moment:

I guess the bottom line is that to survive this moment is going to require:

You have to suck it up, grim up, and weather the storm for your own survival. Don’t even go in expecting Twitter to be happy. Expect them not to be. Expect everyone to complain about everything. But most people will be at home watching, throwing parties, making cocktails, having fun. Think of them instead.

And where the Oscars lead, the rest of Hollywood will soon follow.

No Guts, No Glory - SAG Edition