The last and only time Jane Campion has been nominated for a DGA was the year I first got online. 1994, 28 years ago. This is somewhat hard to fathom. It’s a whole lifetime. Campion’s career was just beginning and she hit the big time with The Piano. Her painterly eye, her inclination toward twisted eroticism, her mastery of color and light was all evident back then. She won an Oscar for her screenplay and then was mostly never anywhere near the Oscar race ever since.

Both The Piano and The Power of the Dog feature a woman being exiled to isolated places they aren’t familiar with. Both films involve a piano and how being able to play one is a symbol of freedom. In The Piano, Holly Hunter’s character can’t speak, but she can make music. When her husband chops off her finger, it is like taking away the thing that matters the most to her (other than her daughter and lover, of course). It is a symbol of the essence of who she is. Attempting to take that away is one of the worst things he could do.

In The Power of the Dog, the Kirsten Dunst character is also connected to a piano that her husband has delivered to her. She wants to learn how to play it, hopes to learn how to play it, but Phil Burbank keeps hovering, stopping her from playing, mocking her. Eventually, she gives it up and sinks into depression and alcoholism. If you put Hunter’s Ada McGrath and Dunst’s Rose Gordon side-by-side, you see how one character was robbed of her spirit and her voice. In the other film, she can’t even find it to begin with. One is made of strong, rebellious stuff; the other is fragile and coming apart. The interesting thing about The Power of the Dog is that it is about snuffing out evil more than it is about surviving it.

These two films that represent Jane Campion’s career-high points (who did exceptional work in between) are similar visually, but the urgency of The Piano has been replaced by quiet contemplation, illustrating the journey of life and art.

Campion is the frontrunner for Best Director because she has made the best film of her career. It is her sparest and the most direct. Her clean lines and disciplined editing shows she has nothing to prove and has become a master of the form.

Also having just directed the best film of his career, Kenneth Branagh has, like Campion, settled into assured contemplation with Belfast. There isn’t a minute in this movie where he loses his touch. It is in every frame, every music cue, every joke, every heartbreaking minute. Each of his characters is so beautifully delineated we come to know them as people as the film unfolds. Because of that, Branagh takes us right into the heart of his childhood. We feel what he feels. We feel the blush of first love. We feel the confusion of parents fighting with each other. We feel the warmth of the grandparents. Most of all, what comes through more than anything is Branagh’s deep love for his homeland. This film is not just a love letter to his childhood but to Belfast, Ireland: a place nearly ruined by tribal warfare but still shines brightly beneath the scars. What a beautiful film this is. What a masterful director he is.

The message that Belfast leaves us with is one of forgiveness. Once you move through the worst of things, you are left to sort through the remnants. So much of what once seemed important falls away and you are left with the essentials. Whom you loved. Whom you miss. What can never be. Branagh has helped us remember everything he never wants to forget. He’s taken what happened and linked it to what many of us are living through now with our extreme polarization, dehumanization, and daily battles. At its best, art can take us places our daily lives can’t. That is most especially true with Belfast.

There probably is no greater master of the form with a film in the race this year than Steven Spielberg, who just seems to get better every time he makes a movie. He just knows what he’s doing. He knows what the audience needs and he gives it to us. He knows how to hold a closeup. He knows when to cut a scene. He knows what works in action, what works in romance, and how to dazzle the audience with moments of breathtaking awe. The man has made so many great movies, he is practically one of the seven wonders of the world. With West Side Story, he has easily made one of the best films of the year, an incomparable masterpiece that invents a new way to tell an old story that is every bit as relevant today as it was when it was written. He has managed to make a film that looks like it was made in the 1950s, with the color palette and even the casting. It’s such a vibrant, delicious, thoroughly satisfying film by the hand of an absolute master. You never see him sweat, not in one single frame.

Denis Villeneuve has created another visual masterpiece with Dune. Mysterious, moody, sensual – Dune has become one of the strongest films of the year and of Villeneuve’s career. Dune might be a part one but it is one of the most immersive films ever made. He holds onto you from frame one and doesn’t let go until the very end. He hasn’t yet won Best Director but he’s well on his way.

Taking us into the dark and creepy world of carnivals is Guillermo del Toro‘s Nightmare Alley. Someday, looking back on this movie released this year, it will seem to mark our time almost better than anything else. Our inclination to revel in the suffering of others. Our willingness and hunger for public humiliation. As we suffer from just making it through the day as inflation rises and COVID takes the rest, here we all are at each other’s throats. Del Toro has always been a fearless director. For him, things can never get too dark or too horrific to put on film. Nightmare Alley. It is a film that reflects our world back to us, even if we don’t like what we see. Noir and horror had a baby. Not a normal baby — a freak baby in a jar. You don’t dare look at it. But how do you not look at it?

Paul Thomas Anderson‘s made his own childhood memoir with Licorice Pizza, a nostalgic look at what it was like to grow up in the San Fernando Valley in the 1970s. It’s full of bursts of memories: waterbeds, feminists, Jon Peters, big houses in the hills. And through it all we see a kid who really did grow up too fast, as we all did back then. Anderson tells this story like he’s coasting down the boulevard with the windows rolled down, with no seat belt and no plan.

Reinaldo Marcus Green has definitely become one of the more prominent directors working today now that he’s made King Richard, which could land in the DGA Five, as well as Best Director at the Oscars. In a different time and place, it would have been a huge hit at the cineplex. Next up for Green is the HBO series We Own This City, about the killing of Freddie Gray and the subsequent protests.

Adam McKay is looking at his third Best Director nomination for Don’t Look Up, after DGA and Oscar nominations for The Big Short and Vice. Don’t Look Up is really a cathartic howl at the absurdity of this moment in our history. We are distracted by so much we can’t see the threats that are literally aimed right at us. It’s climate change, but it’s also potentially other catastrophes, like another financial meltdown or a world war. Don’t Look Up is rounding out the year as one of the strongest contenders.

Ridley Scott directed not one but two films this year, and they could not be more different, although both films are mostly centered on female characters. House of Gucci is a strange and sometimes darkly funny melodrama with a massive cast and bravura performances, with Lady Gaga anchored at the center. The Last Duel is truly the film made this year that deserved a spot in the Best Picture lineup. It is most definitely one of Scott’s best films, and yet it hasn’t really gotten any traction. Still, that he made The Last Duel helps enhance House of Gucci. To know he made both films show just how versatile and adept of a director he is.

Sian Heder is also a director who had one of the strongest films in the race with CODA. She wrote and directed the film, which is an American adaption of the original French film Famille Bélier. Heder should definitely show up, given how popular CODA has become, earning a Golden Globe nomination for Best Picture and now a SAG ensemble nomination.

Although she isn’t getting any attention, I was impressed with Leisl Tommy‘s work in Respect. I don’t know why it is this film slipped through the cracks, but the beauty of it is the way she captures the relationships between Aretha Franklin and her sisters. Aaron Sorkin took a major leap forward with Being the Ricardos. Maggie Gyllenhaal earned a Golden Globe nomination for Best Director and will likely be among the “first-time” directors at the DGA, along with Rebecca Hall.

While there are many standout directors this year that likely won’t land in DGA, there is always the chance that Pedro Almodovar for Parallel Mothers, or Ryûsuke Hamaguchi for Drive My Car, or Asghar Farhadi for A Hero, or Paolo Sorrentino for The Hand of God might land in Best Director for the Oscars. You never know.

Going all the way back to 1990, here are the directors who won the DGA but did not win the Oscar for Best Director:

And that’s it, my friends. So you can see, it is a very small list. The DGA winner mostly has Best Director locked up, although the Parasite win is a reminder that actors can sometimes shift things if they feel strongly enough about a movie.

Sam Mendes had already won for American Beauty and Bong Joon Ho had not, so that also contributed, I would imagine, to the shift. That was quite the year for Best Director, with Quentin Tarantino’s Once Upon a Time in Hollywood and Martin Scorsese’s The Irishman also in competition.

Right now, the DGA Five is looking something like this:

Then the last slot goes either to Adam McKay for Don’t Look Up, Reinaldo Marcus Green for King Richard, Paul Thomas Anderson for Licorice Pizza, or Guillermo del Toro for Nightmare Alley.

When it comes to Oscar, it’s likely to be different as the DGA has something like 18,000 directors spanning film and TV, while the Academy’s directors’ branch is much smaller at 500 or so members. It is possible but unlikely we get a 5/5 match between the two. It’s just a matter of figuring out which surprise nominee might show up at the Oscars.

Here are the charts. 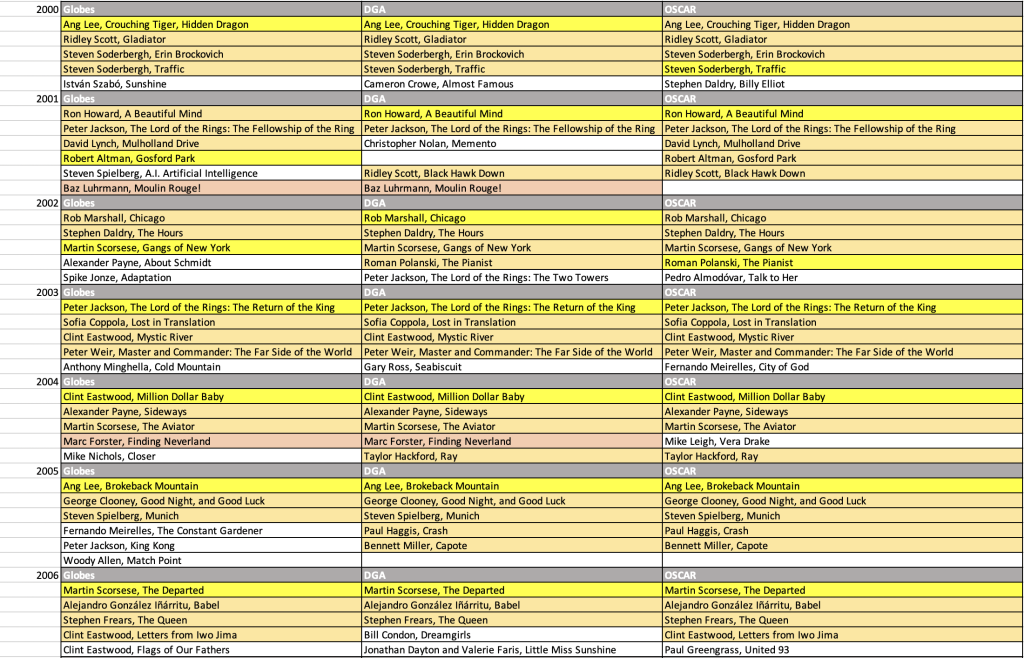 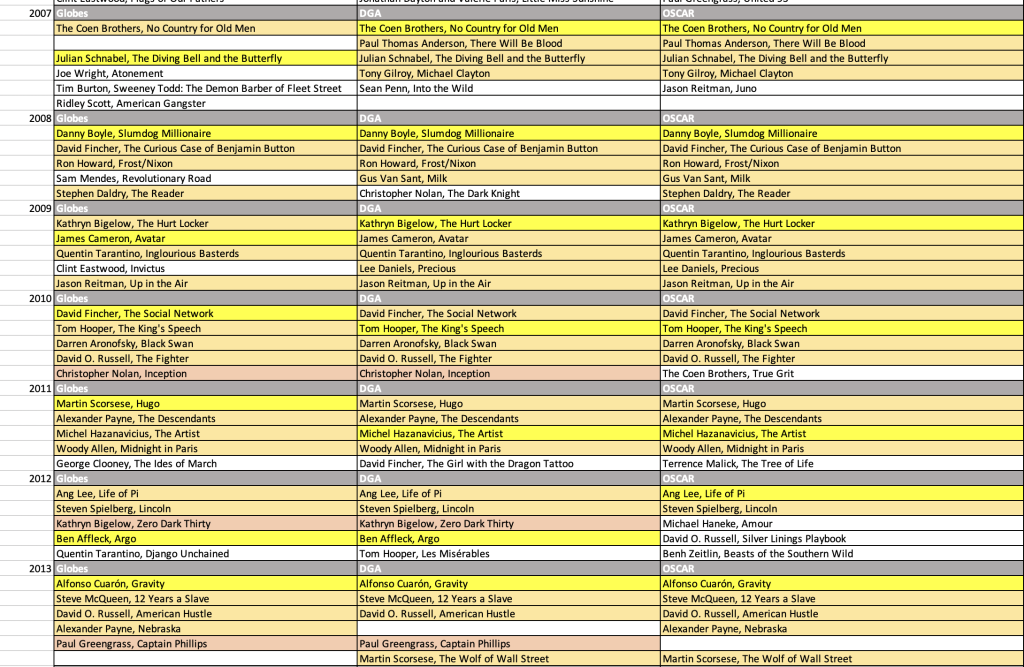 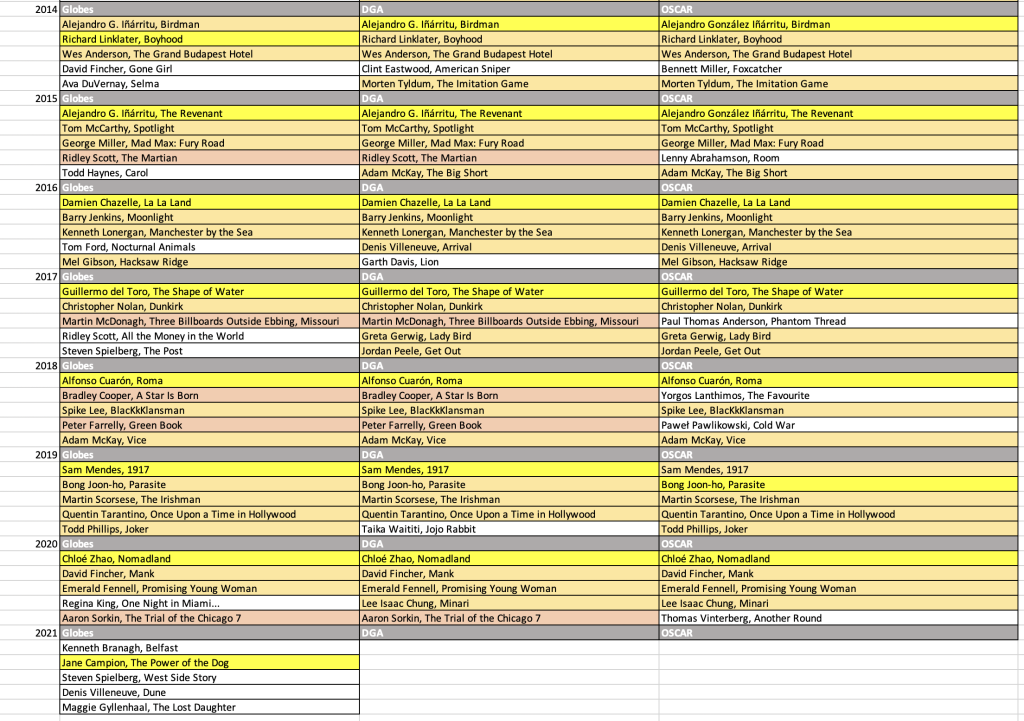