Best Actress – Clash of the Titans

There is no question that this year’s Best Actress race features a group of bravura performances by powerhouse actresses. All of the potential nominees are women who play icons from our collective memory.

Lucille Ball, Princess Diana, Tammy Faye Bakker, Aretha Franklin: all were major cultural influences in their time, breaking barriers put before them. They were risk-takers who grew up in the public eye for one reason or another and who eventually found a sense of purpose in their work. They have been lovingly immortalized by these actresses, all of whom have a shot at the big prize. Nicole Kidman would be winning her second Best Actress Oscar for playing Lucille Ball. Jennifer Hudson would also be winning her second Oscar but first for lead, after having won in supporting for Dreamgirls. Kristen Stewart would be looking at her first Oscar nomination, while Jessica Chastain would be coming in with her second nomination for Best Actress and her third nomination overall.

Both Lady Gaga, who plays a real person in House of Gucci, and Olivia Colman, who plays a fictional character in The Lost Daughter, have taxied over to the dark side with their roles, but they are just as challenging, and yes, they are also DIVAs. Lady Gaga would be looking at her second Best Actress nomination, while Olivia Colman would be looking at her second win in a span of 4 years.

They aren’t the only ones in the race that have a shot. There is also Rachel Zegler, who won Best Actress (Comedy/Musical) at the Golden Globes and who has a very good chance at landing her first Oscar nomination. Alana Haim in Licorice Pizza could be a surprise nominee if the film is well-liked overall. Both Jodie Comer in The Last Duel and Penelope Cruz in Parallel Mothers, not to mention Frances McDormand in The Tragedy of Macbeth and Tessa Thompson in Passing, are all in the running too if there are any major surprises by the end of it.

In all of Globe/SAG/Oscar shared history, there has never been an Oscar winner who was not nominated for a SAG award. But then again, stats were meant to be broken. All they can tell you is what has happened before. We’ve seen shocking things happen in the Oscar race, like Parasite’s win as a recent example. I guess the idea is that someone who is really popular should be on the list for the Screen Actors Guild. But then again, the SAG isn’t really the SAG anymore. It’s the SAG-AFTRA since around 2012. That does sort of add a new element to the stat game.

I am wondering if there wasn’t some split voting going on between Rachel Zegler and Kristen Stewart — two youthful newcomers — allowing Hudson to take that fifth slot at the SAGs. We don’t know if that will play out the same way at the Oscars or what might be the deciding factor.

But I guess we can always go back to our “likability” scale, which is as follows:

All three of these factors seem to drive nominees. Someone like Nicole Kidman obviously has the winning package, even if “likability of movie” might be slightly mixed. There is no question that she’s a well-liked movie star or that Lucille Ball is a well-liked comedic icon. She also has the benefit of being the center of an Aaron Sorkin hurricane, which means she gets a lot of the best lines in Being the Ricardos. It isn’t just a matter of Nicole Kidman being great in the role: it’s that the ROLE is great. It’s incredibly well-written. Sorkin is on fire with the screenplay and the dialogue. That helps Kidman, because she hasn’t really been given this kind of cerebral role to play, at least not since her magnificent turn in To Die For.

Dialogue also helps Lady Gaga, who has “likability of star” more than “likability of role” or “likability of movie.” But what she has more than anything is that she gets all of the best lines of Gucci and steals the whole movie. She really was born to play the part and was the main reason people went to see the film in the theaters. When you think about zeitgeist roles, Gaga will be remembered for this movie for decades.

Jennifer Hudson is known primarily as a singer, but regardless, she is well-liked. What she has more than anything is “likability of role,” as there probably isn’t a more beloved icon in this lineup or any other than Aretha Franklin. That Respect is such a carefully told story is why Hudson is a standout (to anyone outside the bubble of Film Twitter). It is the evolution of Franklin that matters, because the film bookends her beginnings with one of her biggest dreams realized: living to see the election of the first black president, Barack Obama.

The Oscar pundits are very much into the idea that Olivia Colman will slide into home base as she did with The Favourite. She is just such a brilliant actress who can be as serious as she can be funny. Think about how different her work is in The Favourite from The Lost Daughter or Fleabag or Broadchurch — it’s hard to not admire her range. In The Lost Daughter, she plays an enigmatic woman whose story unfolds bit by bit. Nothing she does makes complete sense: she’s sort of a whirlwind of chaos, but man does Colman go all the way there. The scene in the movie theater or at the beach — she is an island unto herself, demanding her own selfish pleasure instead of being giving of herself, which would allow her to be a good mother or a good wife or even a great date. She just doesn’t have the skill set for these things.

But here’s the thing: The Favourite was a strong Best Picture contender, coming in with a whopping 10 nominations, including Picture, Director, and Screenplay. It was a very popular film among the Academy voters. This was my own personal blind spot. I prioritized “likeability of star” with Glenn Close over Colman’s “likeability of role” and “likeability of movie.” You don’t need all three, but it’s better to have more than one. This was true in Best Actor last year, by the way. They clearly liked The Father more than they liked Ma Rainey’s Black Bottom because The Father had a Best Picture nomination.

Because that isn’t an ironclad rule it is easy to dismiss how Best Picture does often factor in.

The one thing that overrides having a Best Picture nomination in the era of the expanded ballot (2009-current) appears to be “likeability of star.” That means they WANT to give this person an Oscar even if they didn’t especially like the movie or the role. It’s rare that they just up and give an award for any other reason other than that they are overdue for a win. If they really like the performance, sometimes the movie gets swept up in the Best Picture race, as The Blind Side did.

For Kristen Stewart in Spencer, without having won the Golden Globe and now without a SAG nom, she is really going to need to show up, I would think, as one of the TWO selected BAFTA nominations. The members overall can choose two of the names in the Best Actress lineup, while the “committee” brought in to help with “diversity, equity and inclusion” will select three of those names. But that will be difficult because there is a pretty good chance Olivia Colman is going to be one of those two. Who will be the other? On the BAFTA long list, we have a lovely chart that Marshall built that shows which movies are the most popular with the members at large: 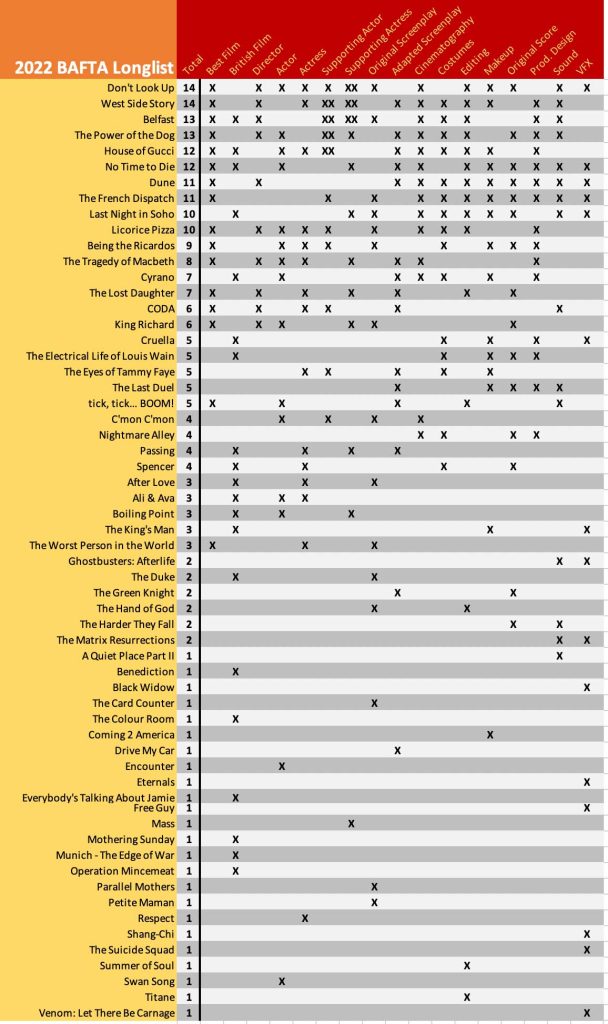 As you can see, House of Gucci is very popular with BAFTA. So is West Side Story. Being the Ricardos did not do too badly.

So if we’re looking at potential Best Picture nominees in the Best Actress race, the strongest bets for that would probably be:

Nicole Kidman, Being the Ricardos — If she is going to win Best Actress it seems logical that the film would be swept up
Lady Gaga, House of Gucci — Ditto
Rachel Zegler, West Side Story — If they really love the movie it’s likely she makes it in
Olivia Colman, The Lost Daughter — Mark Johnson thinks this has a good shot of getting in, and if that happens does it tip it in her direction like it did before
Alana Haim, Licorice Pizza — If they really love the movie she might get swept along

The actress who seems most overdue that likely won’t have a Best Picture nomination would be:
Jessica Chastain, The Eyes of Tammy Faye

When I think about a Jennifer Hudson win, I think about the Halle Berry factor: no Black actress has won in 94 years of Oscar history except Halle Berry 20 years ago. It is a glaring, embarrassing stat that is the exact kind of thing that forces mandates on the Academy. While most people want things to go back to judging performances just on the performances, when you look at this stat that makes it a tough sell. How does anyone even answer that? But that kind of momentum would require more press coverage than we’re seeing now — a kind of groundswell. There isn’t, so far, momentum for the film. The first we’ve really seen of it was Hudson’s surprise nomination at SAG and her appearance on the BAFTA long list.

We thought Kristen Stewart had this thing in the bag. She actually still might — you never know. As Owen Gleiberman points out at Variety, losing that SAG nom might work in her favor. She might get voters rallying behind her in a way they might not have. Sometimes people miss because voters take this spot for granted so they put their energy elsewhere. It’s just one of those things we can’t know. But what we do know is that without a SAG nom, someone else is going to win that night at the SAG Awards and have the heat going into the Oscars.

Here are our (Marshall-built) charts: 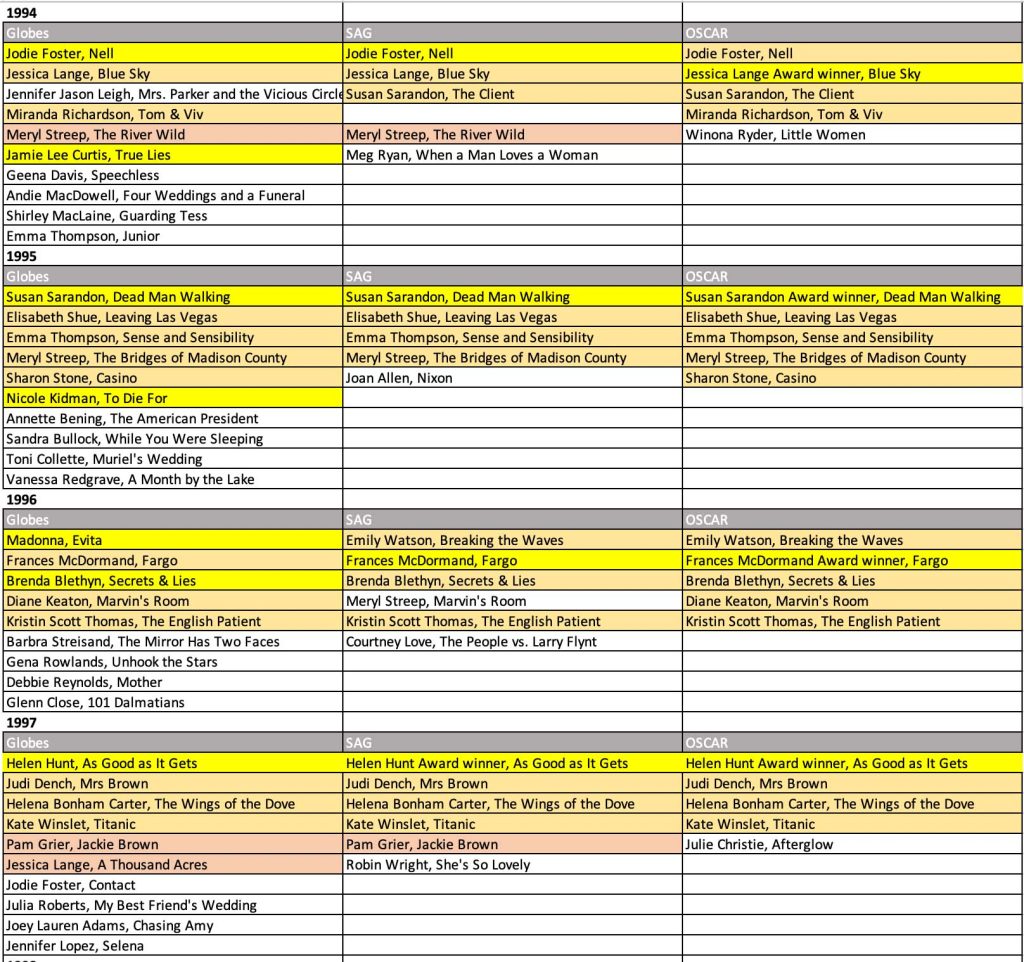 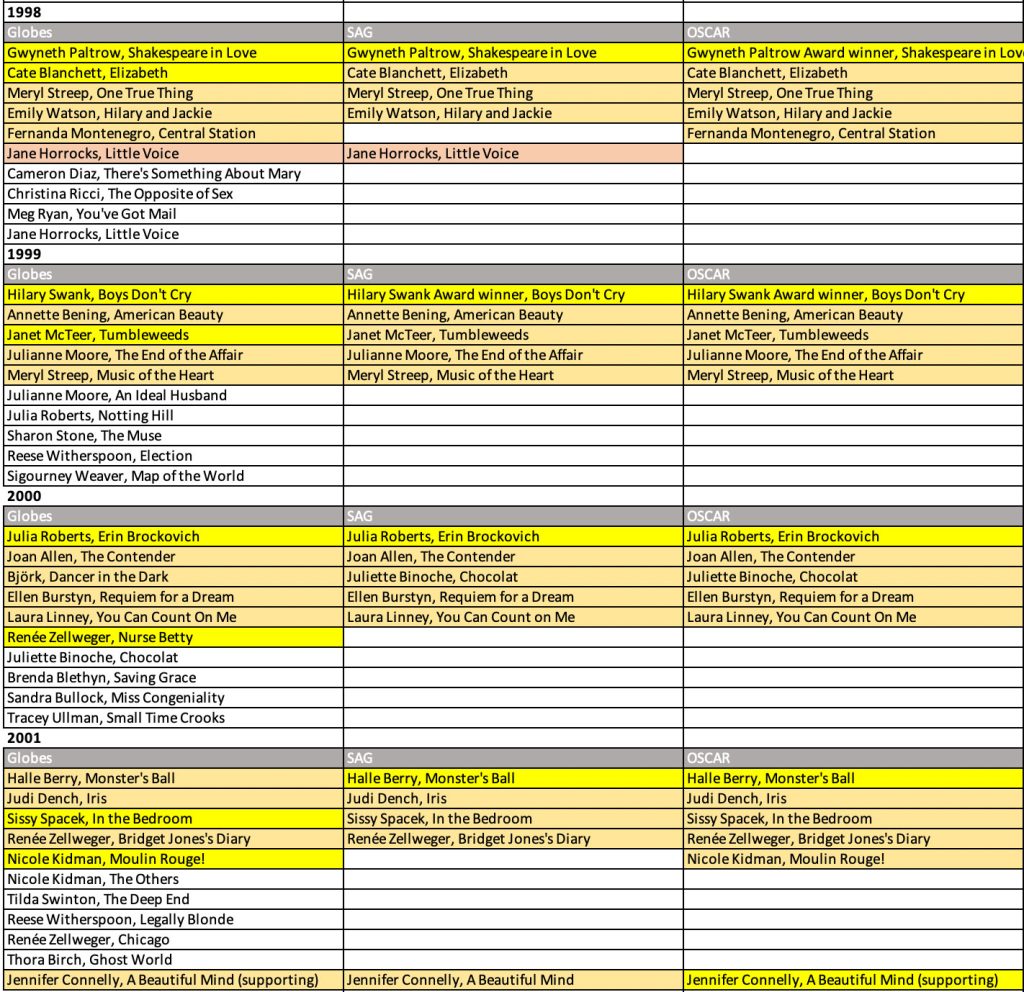 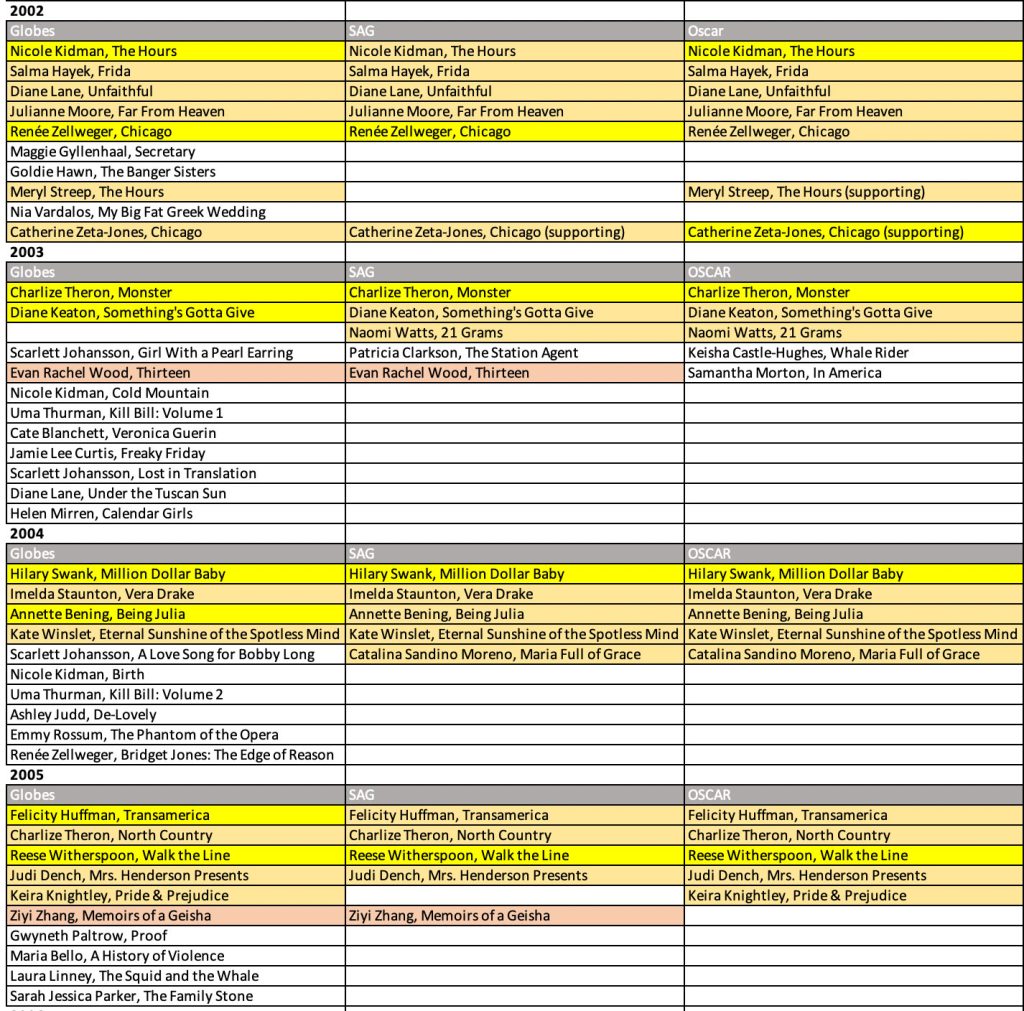 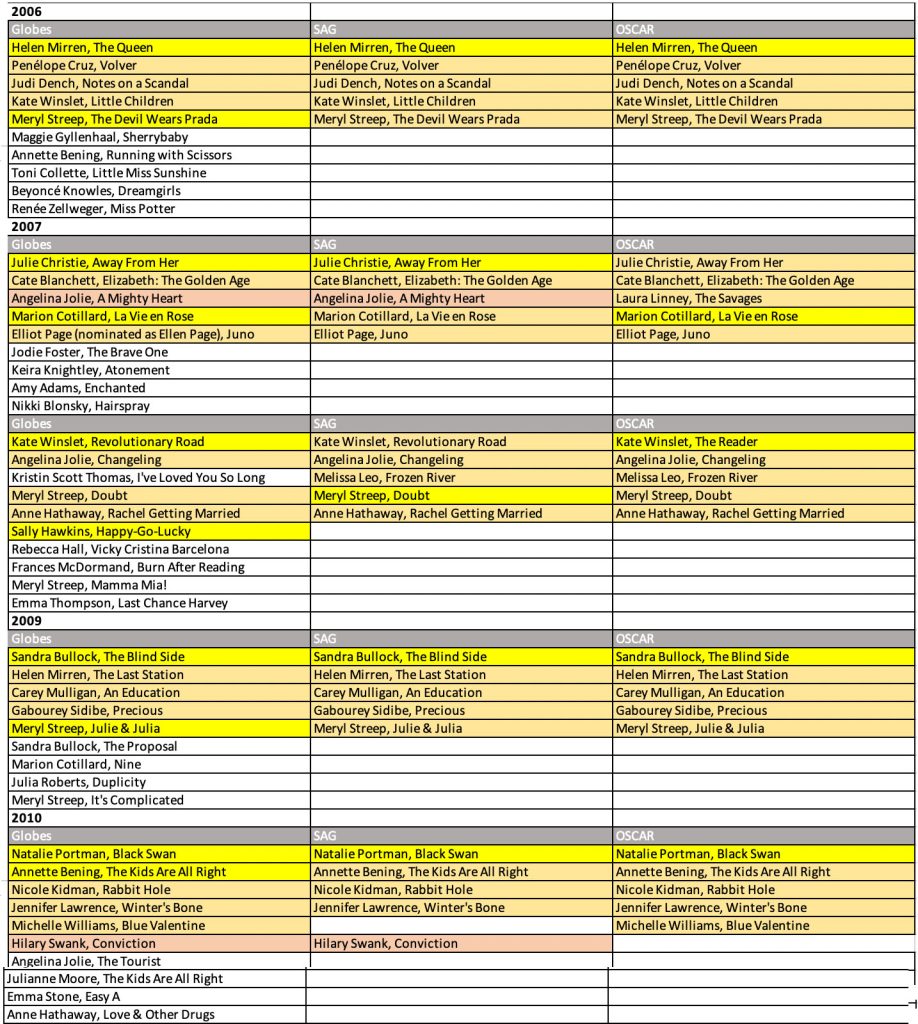 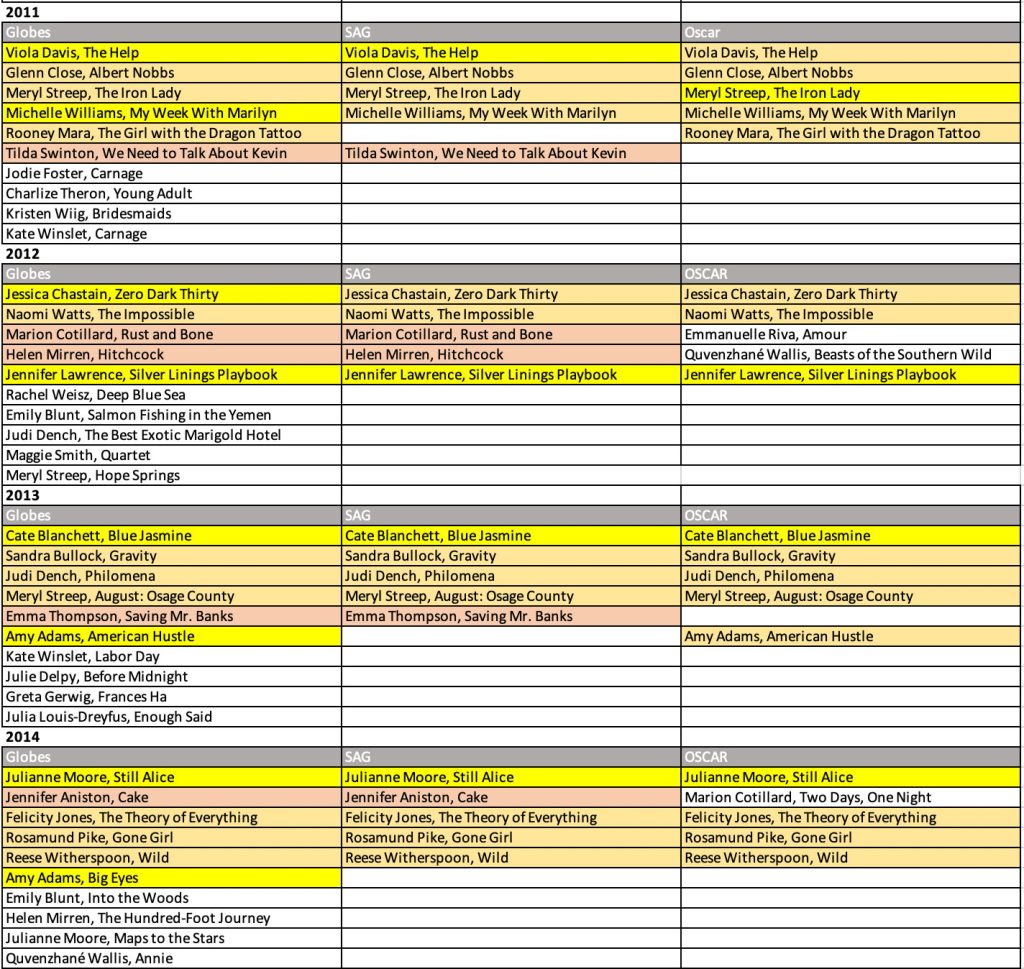 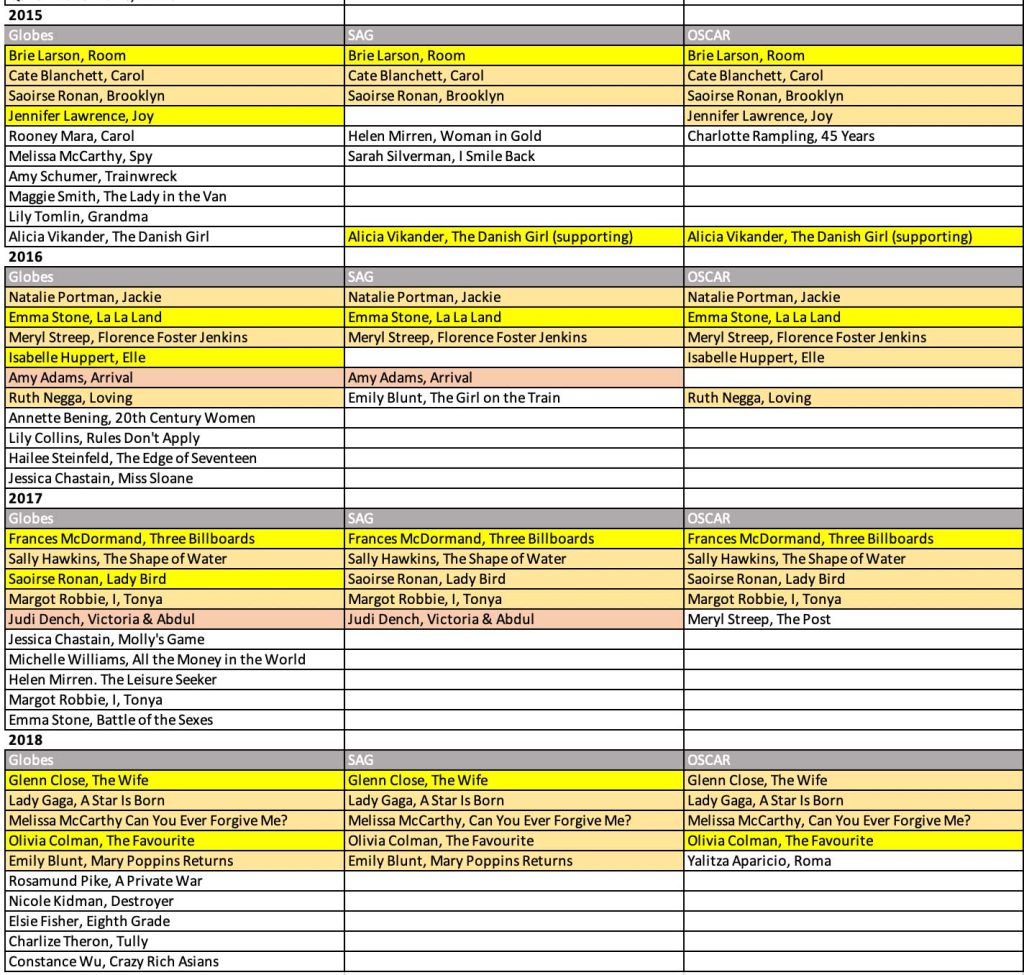 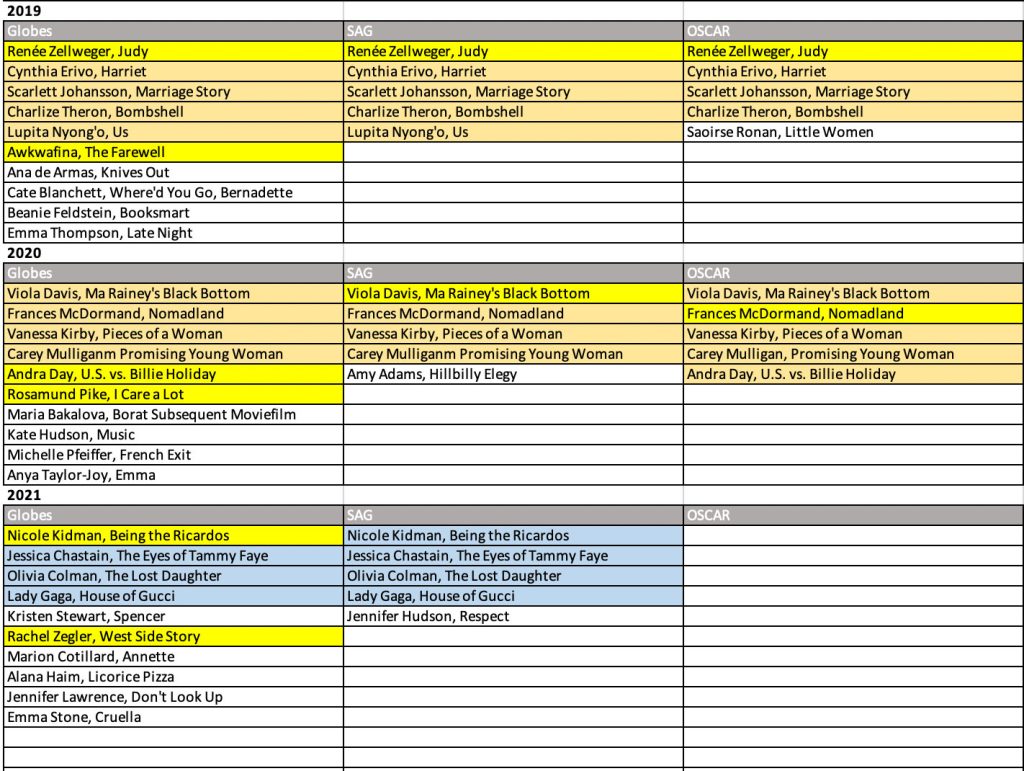