Frontrunners and Their Challengers Heading into the Heat of the Season

All of a sudden, the Oscar race is starting to feel more wide open. The reason for this is, I think, the extended time frame for voting. You can feel some films rising (maybe films that would have been skipped in a shorter season) and other films faltering. It’s something you can’t entirely explain and it isn’t really anything you can see on Twitter: some of it will possibly show up there, but the site is more for performative acts of virtue (or outrage) than it is a good gauge of what voters actually like.

As the season wears on, we’re about to enter heat week: a week from tomorrow we’ll have all of the major awards announcements on the same day Oscar voting begins. Here is a quick look at the calendar from AwardsWatch:

It is shocking to think that we will have the DGA, ACE, PGA, and WGA announcing nominations all on the same day. Perhaps only shocking for those of us who cover the Oscar race, of course, but shocking all the same.

Either they are all going to align the way we expect them to, or they will be all over the place. Voters then have FIVE DAYS to vote their picks. There won’t be much time to shift consensus, but a few names may be here or there. Since none of these groups will be feeding off the momentum of the others, it should turn out to be an interesting list indeed.

I sort of expect it to be a hot mess. Ideally, all five Directors Guild nominees will also be Producers Guild nominees. I do sort of suspect we might see Spider-Man show up at the PGAs. Although both the PGA and Oscars have 10 nominees and both groups use the preferential ballot to determine winners, only the Academy uses the preferential ballot for nominations as well. At PGA, voters do not rank their choices for Best Picture: they just select and list 10 films. As such, a number one vote matters more at the Oscars than it does at PGA since with the PGA you are only naming your ten favorites as opposed to thinking about what you would put at number one. This makes it far easier to put down something like Spider-Man down. If you are ranking your choices, you are less likely to do that — unless of course Spider-Man really is one of your favorites. I am not sure the Academy voters are ready to go there, even if Spider-Man: No Way Home is now the fourth highest grossing film of all-time domestically: 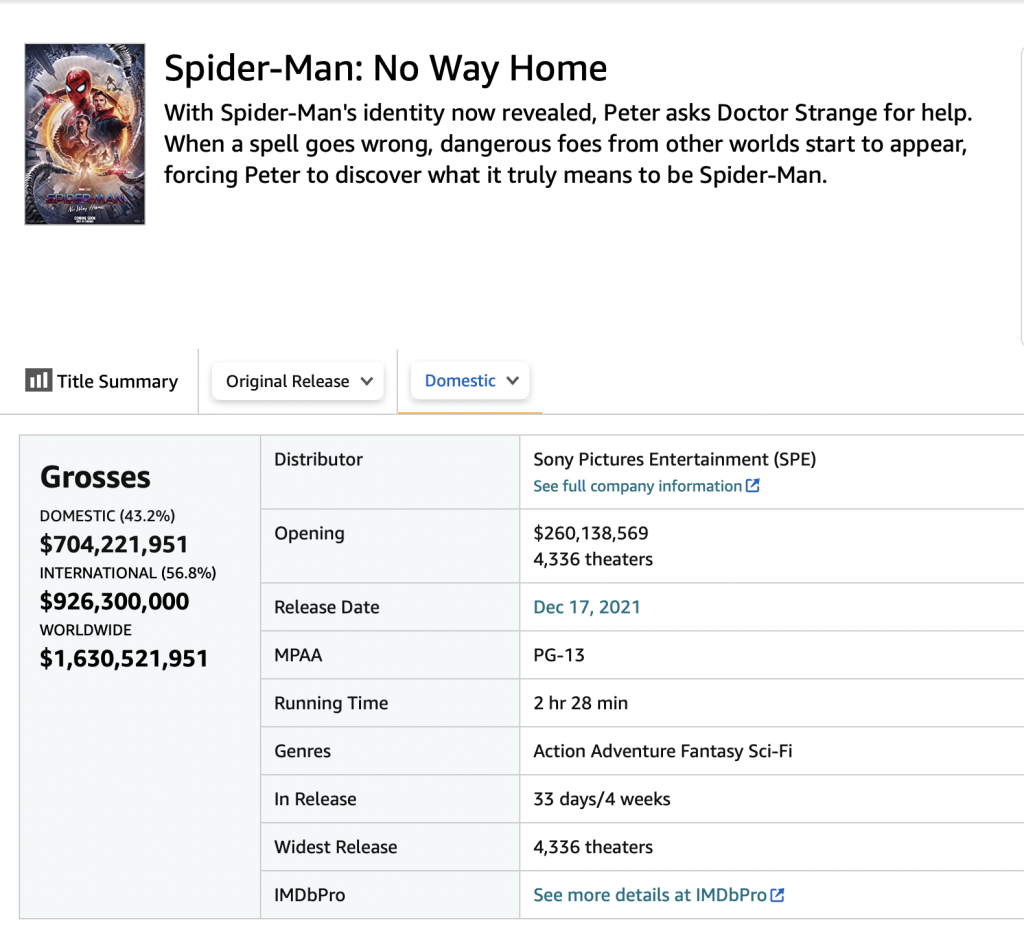 The Oscar game is, perhaps, too controlled for something like Spider-Man to pierce the Academy’s bubble. But you never know. I would love to see them modernize and be accessible and relevant to the younger generations, instead of waiting around for them to like the movies Oscar voters like. Then again, maybe they don’t care that much. It’s like that scene in Stardust Memories — Jazz Heaven. An old world, a preserved world.

Usually, energy and passion can be generated when the consensus realizes at the same time that they’ve “forgotten” a movie or two and then they rally behind it, like the way they did with Little Women, which was given a massive push by the most prominent journalists in the country and did manage to get in Best Picture. But usually, people don’t notice the “forgotten” contenders until the nominees are announced and their names don’t show up. By then it’s too late.

Despite the fact that COVID has once again knocked out awards season, hopefully we’ll get SOME publicity activities coming in the next few weeks so we can start to suss out where the momentum really is, as opposed to people speculating what they think it is.

Here is where I think the race stands now in the major categories, just a week away from the 27th.

It doesn’t seem at the moment that anything has changed. The dynamics at play are still at play. Film Twitter and Gold Derby remain bullish on The Power of the Dog winning. That includes Joyce Eng and Anne Thompson.

A few people are holding onto Belfast, some have West Side Story, a few even have Dune. At the moment, it does seem like it’s still down to the same movies. But remember, finding the winner takes place in the second part of the Oscar race, or Phase 2 as we call it. Final Oscar voting starts March 17th, almost a whole two months away. Usually, it all moves much faster than this, so we can’t possibly know what film will catch the wave by then. What we have is The Power of the Dog and West Side Story being the two Best Film winners at the Golden Globes, with Belfast winning Screenplay.

By the time March rolls around, there will be at least SOME changes, but we can’t know what those will be. All we kind of know is that what wins usually makes people FEEL GOOD. They vote for what makes their hearts sing, or vote to show they are doing something GOOD for the world — something that can be defined by the film itself, like Spotlight. Or it can be defined by who made the film, like Nomadland. It just depends on which way the wind blows as we head into final voting. We don’t know what is going to be left out, what will come in with the most nominations, what will capture the zeitgeist. It’s impossible to tell right now.

But here is how I see it:

The Frontrunner — The Power of the Dog. It just won the Globe for Best Film — Drama. It looks on track to win Best Director at the DGA, Adapted Screenplay at the USC Scripters, and it appears that, after winning the Globe, Kodi Smit-McPhee might be the frontrunner for Supporting Actor. Ari Wegner could also potentially become the first female to win Best Cinematography.

Challengers:
Belfast, of course. It has won audience awards and is quietly beloved. Can it build momentum or not is the question.
West Side Story — It won the Globe (Musical/Comedy), and it’s Steven Spielberg.

The Frontrunner — Jane Campion, The Power of the Dog
Challengers — Kenneth Branagh for Belfast, Steven Spielberg for West Side Story, and Joel Coen for the Tragedy of Macbeth (I mean, you never know). And of course, Denis Villeneuve for Dune and Adam McKay for Don’t Look Up.

The Frontrunner — Will Smith, King Richard
Challengers — Benedict Cumberbatch for the Power of the Dog, Andrew Garfield for tick tick Boom, Denzel Washington for The Tragedy of Macbeth. There does seem to be a “fifth slot” problem at the moment, which could be filled by either Javier Bardem in Being the Ricardos or Peter Dinklage in Cyrano. The Cyrano team is working against the clock in COVID times and have a half-hour special tonight on NBC, the teaser is here.

The Frontrunner — Nicole Kidman, Being the Ricardos, but it is a wide open race and anyone could still win at this moment in time. Kidman is the frontrunner only because she won the Golden Globe and because Kristen Stewart was not nominated for the SAG. But that doesn’t necessarily mean she IS the frontrunner. She might be. It’s a wait and see kind of thing.
Challengers — Olivia Colman for The Lost Daughter; Lady Gaga, House of Gucci; Jessica Chastain, The Eyes of Tammy Faye; Jennifer Hudson, Respect

The Frontrunner — Ariana de Bose, West Side Story. She appears to have it in the bag.
Challengers — We don’t know who the nominees will be yet, of course, but Kirsten Dunst for The Power of the Dog is in there, as are Caitriona Balfe for Belfast, Ruth Negga for Passing, perhaps Aunjanue Ellis for King Richard. And there is always the chance that Marlee Matlin could make the cut from CODA.

The Frontrunner — Kodi Smit-McPhee, The Power of the Dog
Challengers — I don’t know, but I’d be a little worried about Bradley Cooper in Licorice Pizza, who has hardly any screen time but is absolutely hilarious in every second of it. He might be in Uggie the Dog territory if his performance starts to catch on. But Smit-McPhee definitely has momentum at the moment. I’d also watch out for Troy Kotsur for CODA. The Belfast boys, Ciaran Hinds and Jamie Dornan, could also get in there, depending on how much voters love the movie. We might see a measure of that with the BAFTA nominations.

The Frontrunner — Jane Campion, The Power of the Dog. Keep in mind that in the era of the preferential ballot, it’s hard to win Picture, Director, AND Screenplay, much less have one person win all three awards. It has happened, of course, as it did with Bong Joon-Ho and Parasite. But it is far from the norm.
Challengers — The Lost Daughter, CODA, Dune

The Frontrunner — Kenneth Branagh, Belfast
This is if the film is on track to win Best Picture, it would also win Screenplay. But if it isn’t Belfast, it could be Licorice Pizza, The Lost Daughter, Don’t Look Up, or King Richard.

As for the other categories, we don’t exactly have frontrunners, but a general consensus is beginning to form around several of the awards. We’ll wait until Predictions Friday to go through those.