‘Ozark,’ ‘Gilded Age’ Push to the Top of the Emmy Tracker

Netflix’s Ozark premiered its final season on Friday. It’s a dissected final season with a Season 4 Part 2 due sometime “soon,” as Jason Bateman recently said on the Jimmy Kimmel show. I’m not exactly sure why they decided to cut the season into two parts. They don’t appear to be following the Breaking Bad finale season model that was split over two Emmy seasons. The second half of that series premiered during the voting window for the first half, helping push the first half to a vaguely unexpected Emmy win for Drama Series which was then repeated the following year.

My guess is that Netflix wants to keep the conversation going with Ozark, having seen some of its series disappear into the ether after dropping them all at once. That, of course, didn’t happen with The Crown, which was so lovingly received in Season 4 that it burned through nearly an entire Emmy season in its march to a record number of Emmy wins for the series. Other series (and not just on Netflix, mind you) that premiere everything at once tend to consume their buzz within a weekend or two. Then, nothing. So, by splitting Season 4 into two halves, Netflix keeps the Ozark conversation going.

I’ll admit that I’m not an Ozark watcher. I tried when it first premiered, but it never really captured my attention despite my appreciation for Laura Linney and Jason Bateman. I fully understand that it’s a well acted, directed, and written series that a lot of people seem to like very much (if not outright love). It’s just not for me.

So what’s the critical reaction to Season 4 so far? Well, it’s starting off a bit down from Season 3’s series high.

Metacritic tells a slightly different story with a Season 3 rating of 77 and a Season 4 rating of 78, although there are only 15 Season 4 reviews compared to 21 for Season 3. It may be that critics are holding back a bit on Season 4, waiting for the sure-to-be-fireworks finale.

Traditionally, Ozark is a series that Emmy likes quite a bit if not outright loves. The last time it competed in an Emmy race in 2020, it received 18 nominations but won only a single Emmy — a second trophy for Julia Garner. That’s why Season 4 debuts on the Emmy Tracker under Succession and Squid Game, two series that offer an extraordinary amount of buzz and are currently hot in the guild award season. That may change with the debut of Season 4 part two, assuming it happens this Emmy season. But, for now, we remain confident in its nomination fortunes if less so on actual wins.

Premiering tonight, HBO’s The Gilded Age sees Downton Abbey creator Julian Fellowes return to television with another gorgeously crafted, well acted drama. Comparisons to Downton Abbey will undoubtedly plague the series, but in my opinion, it stands on its own with uniquely American themes and stories. The question is, “Will The Gilded Age follow in the same Emmy-embraced footsteps as Downton?”

My guess right now is absolutely.

First, the below-the-line work on the series is astounding. As the series draws lines between old and new money, it must feature homes reflecting both worlds. The older, pedigreed world holds court in smaller, darker, more classically appointed homes. The contrasting world of new money loves to show off, and as such, we’re presented with palatial homes, giant ballrooms, cavernous dining rooms, and so much gold leafing that Louis XIV may have said “It’s a bit much.” The production design is nearly upstaged by the beautiful costumes with a peacock-influenced gown sported by star Carrie Coon immediately drawing hefty attention.

At its height, Downton Abbey received 16 Emmy nominations for its second season. That came with very broad support from the acting races where it managed six nominations for its main and supporting cast. It’s hard to imagine a scenario where The Gilded Age doesn’t at least match those 16 nominations for its first season. It will match (or exceed) the 7 crafts nominations Downton received for Season 2, and it will compete heavily in the acting races for two main reasons. First, The Gilded Age is full of stars. Carrie Coon. Morgan Spector. Christine Baranski. Cynthia Nixon. Taissa Farmiga. Jeanne Tripplehorn. Nathan Lane. That doesn’t include the Broadway-honed coterie of guest actors who could literally fill bother the Guest Actor and Guest Actress in a Drama Series categories. Second, the acting races have the opportunity to expand the number of nominations depending on the number of performances submitted. So, there is naturally more opportunity to recognize performances for The Gilded Age than there was to recognize lesser known actors from Downton Abbey.

The problem HBO faces now is where to campaign everyone?

They’re still considering Emmy placement, so nothing is official. In our Emmy Tracker, we are imagining that Baranski will not want to compete against herself in Lead Actress (Gilded Age versus The Good Fight), so we put her in Supporting Actress.  Her role is vaguely reminiscent of Maggie Smith’s in Downton Abbey, so we feel good about her potential opportunity to win in Supporting. Carrie Coon’s Bertha Russell is the character (and performance) that everyone is talking about. In a way, you could argue this is, so far, a show that centers around her, so Lead Actress feels good there too.

But then again, there’s Louisa Jacobson (Meryl Streep’s daughter). She’s a lesser known actor, but her character of Marian Brook, the niece of Baranski’s Agnes van Rhijn, does bounce between the old and new money worlds of New York. Could she factor into the Lead Actress race? We also included Cynthia Nixon and Denee Benton in the Supporting Actress race. For now, the series’ women pop most significantly with Morgan Spector’s performance as a new-monied railroad tycoon hugely popping for the men.

It will be compelling to watch audience reactions to The Gilded Age. I loved the series and found it endlessly fascinating in terms of story and in terms of construction. But this series is 100 percent my thing. Critics were, so far, less taken with it than I was. 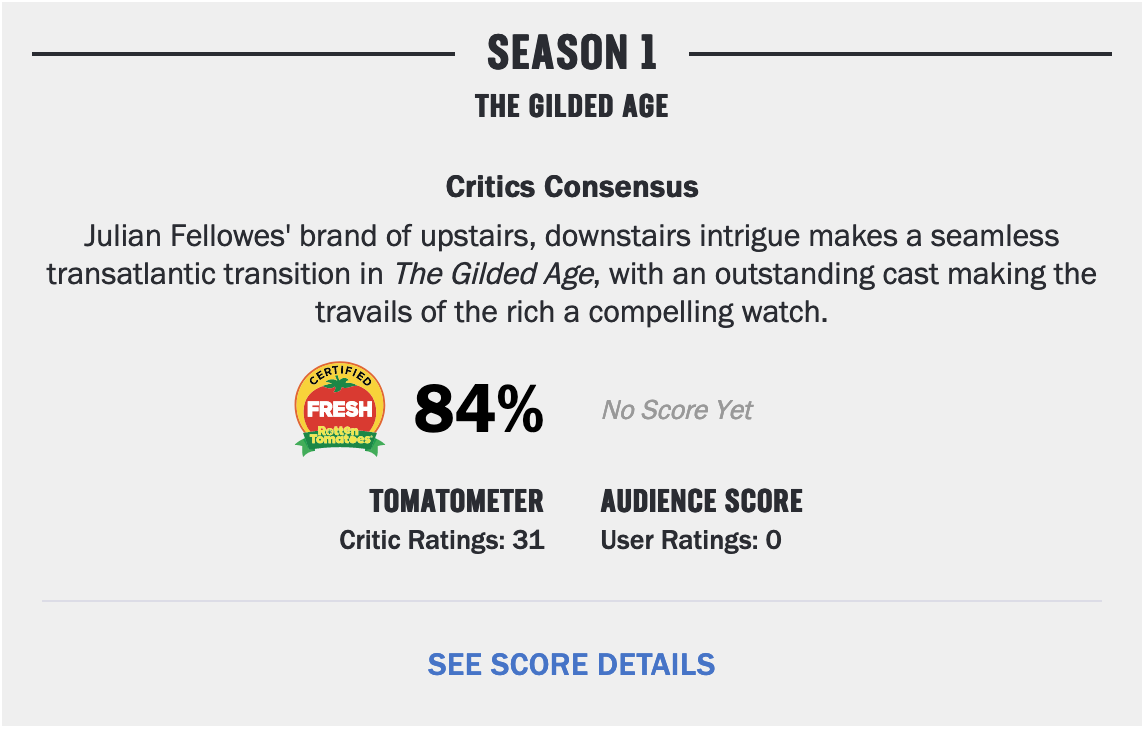 I’m not entirely surprised some critics haven’t fully embraced the series. The five episodes provided for early review admittedly lack the gasp-inducing quality of Downton Abbey‘s Lady Mary fucking poor Mr. Pamuk to death early in Season One. Instead, it seems to be taking its time to orient viewers in this enormous work of New York in the Gilded Age. There are surprises and joys to be had, of course, but comparisons to Downton Abbey may skew some reactions. It is a direct cousin of that series, if not an outright sibling.

Still, at the end of the day, we suspect The Gilded Age will be broadly embraced by the Television Academy and have placed it on the Emmy Tracker as such. It may fall into more of the “respected but not loved” category, but I’m not entirely willing to go that far until we see the last four episodes of Season One.

And then I’ll rewatch the whole series.

Because, as I previously mentioned, this is 100 percent my jam.

Director Robert Greene on Filming 'Procession,' Knowing That Any Point During Filming Could Have Been the End