Now that the Academy has expanded its list back to ten Best Picture nominees (though I believe voters may list fewer than 10), they will be closer to the method used by the Producers Guild. The main difference is that PGA voters simply select ten titles when voting on their nominations — they aren’t required to rank them. The Academy does rank them.

For the Academy, if they want a specific movie to get in, they should push it to the top of their ballot. For the Producers Guild, it doesn’t matter where on your ballot the title appears, as long as it appears. That greatly frees members when it comes to choosing ten. When you rank them, you start thinking about “best.” That makes it harder for a movie like, say Skyfall, to get into the Academy’s Best Picture lineup than it was for the Producers Guild.

In the years where the Academy had an even ten, they nominated animated films for Best Picture: Up and Toy Story 3. The Producers Guild did the same. But the PGA has nominated other animated films in its history, like The Incredibles and Shrek, along with genre movies like Harry Potter and the Sorcerer’s Stone, not to mention Wonder Woman, The Girl with the Dragon Tattoo, Deadpool, Bridesmaids, and even The Dark Knight — none of which the Academy selected.

But since we’re expanding to ten, there is a slightly better chance for there to be some variation of the kinds of films that get in. If you spend any time on Film or Oscar Twitter, you will notice that they don’t want it to become broader, particularly — but they would like for more of the movies they like to get in, like Drive My Car or other critically-acclaimed films. That would make them more excited than, say, Spider-Man getting in. I could definitely see it going in that direction wherein “broader” for the PGA and Oscar wouldn’t mean genre movies but would mean instead, for instance, an International Feature slot, or maybe a movie hybrid like Flee, which will be heading in as a Documentary, Animated, and International Feature contender.

PGA voters are producers and that means they don’t just reward success, they reward artistic efforts. They really do try to do both and succeed better, I’d say, than the Academy. To that end, the Critics Choice is also the most populist of the film critics groups and they have also broadened their lists in recent years to include animated and genre films, where you rarely see that with other film critics groups.

One of the other things producers often do is reward well-known names. This year, I would bet (without even looking) that a good many of the films in the race right now have their directors listed as producers. What that means is that if the film wins Best Picture they win another Oscar. So if they wrote, directed, and produced their film, they could theoretically walk home with Oscars for wearing all three hats, but since voters like to split the awards, it is rare they win all three. Sometimes they do.

Let’s go through them, shall we?

As you can see, a good many of them have also produced their movies, which makes sense considering if you want to get a movie off the ground now, you pretty much have to get it done on your own, rather than wait around for the studios to hire you. But a field of expanded titles for Best Picture makes it less likely someone wins all three, although at least they have a better chance of winning at least one of Picture, Director, Screenplay.

In the years since the Screen Actors Guild has been in existence, only a handful of films have gotten an Oscar nomination for Best Picture with just a SAG Ensemble nomination, missing out on the Critics Choice and the Producers Guild. That list is very short:

When there were five Best Picture contenders:
Gosford Park
Chocolat

And when there were ten:
The Kids Are All Right

These films all had a Golden Globe nomination for Best Musical/Comedy. I pulled these specific groups because they have a long history of matching closely in the Best Picture race. We could probably add the Directors Guild and the stat would hold because none of those three films had a DGA nomination.

I bring this up because House of Gucci‘s placement in the Oscar race will likely depend on whether or not the film receives a Producers Guild nomination. I expect that it is likely it will. But if it doesn’t, it would then have to become the first drama film ever in the history of SAG to get only a SAG nomination, without a Critics Choice, PGA, or DGA, and land in Best Picture. These things happen, but it would be unprecedented.

As you can see by this list, our Best Picture ten is likely on it, based on what we know for sure, give or take a Blind Side or an Amour.

We will post our predictions in a day or so for the PGA.

Here are the charts. As you can see, the PGA titles have been named already by one of these groups. You could even take out the AFI and NBR and you could still find your PGA list based on SAG + Critics Choice. But we need AFI and NBR because Judas and the Black Messiah that hit both of those, skipped SAG and Critics Choice, then landed at the PGA and Oscar.

Of course, there are movies that land quite often at PGA that weren’t named by prior groups, like Skyfall. So I would factor that in when doing your predictions. There is a potential “wild card” slot. 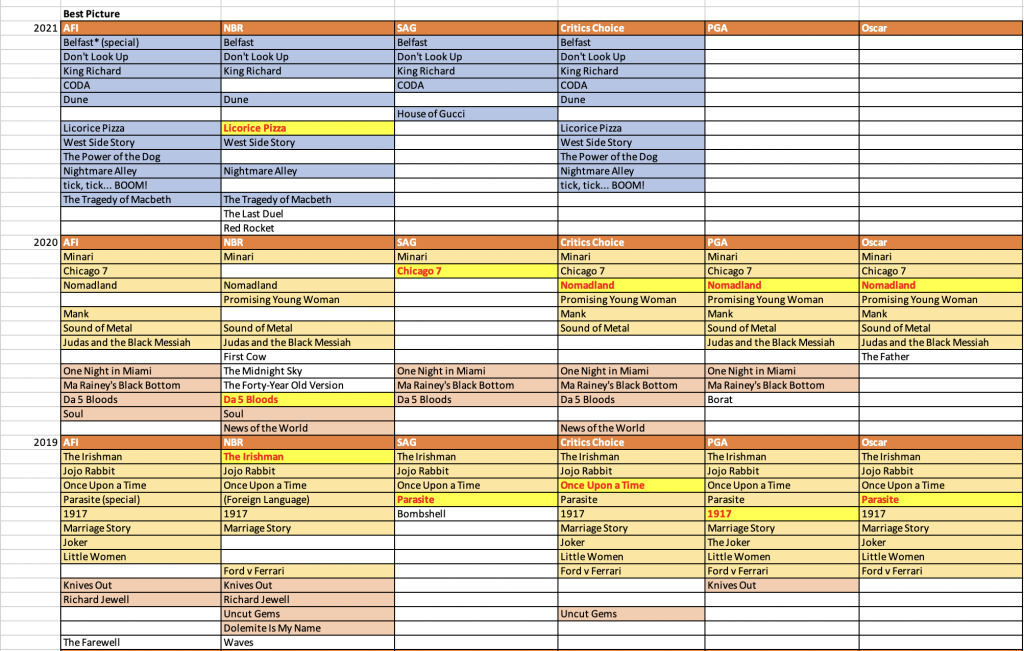 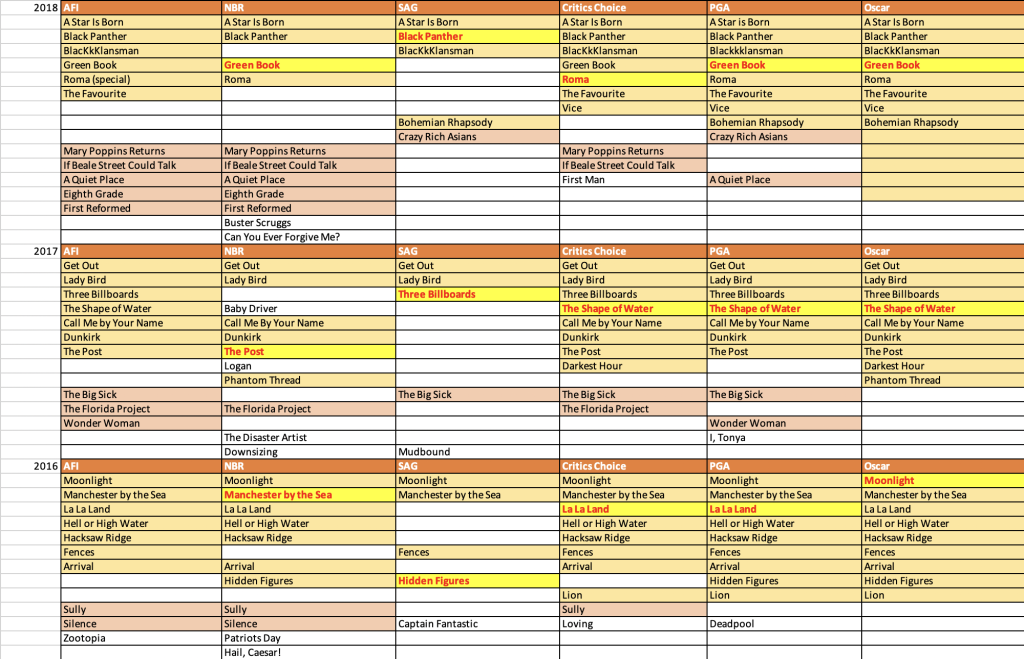 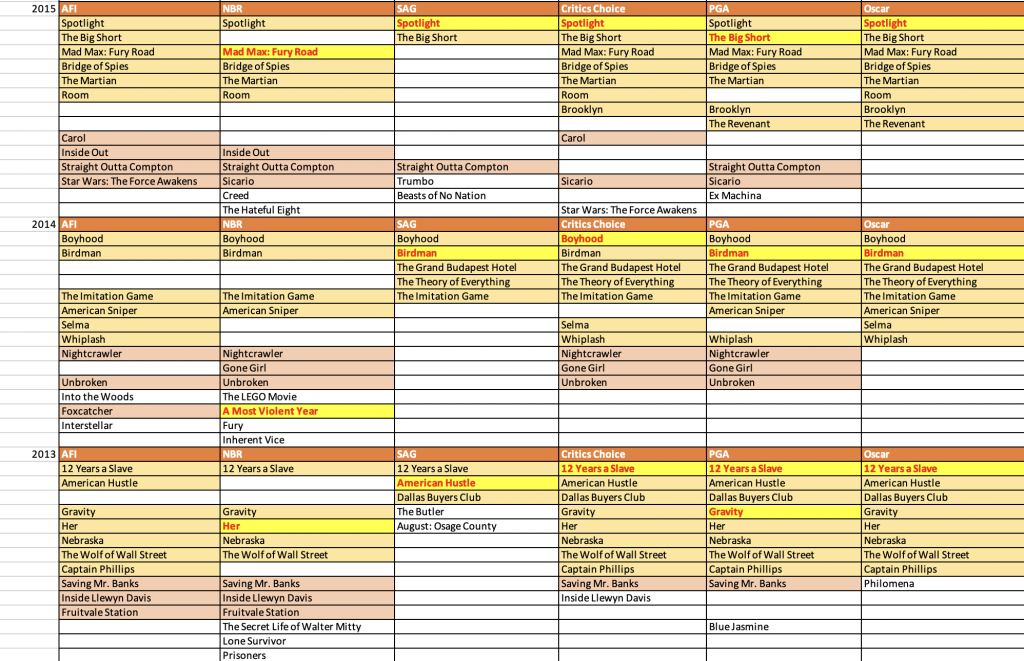 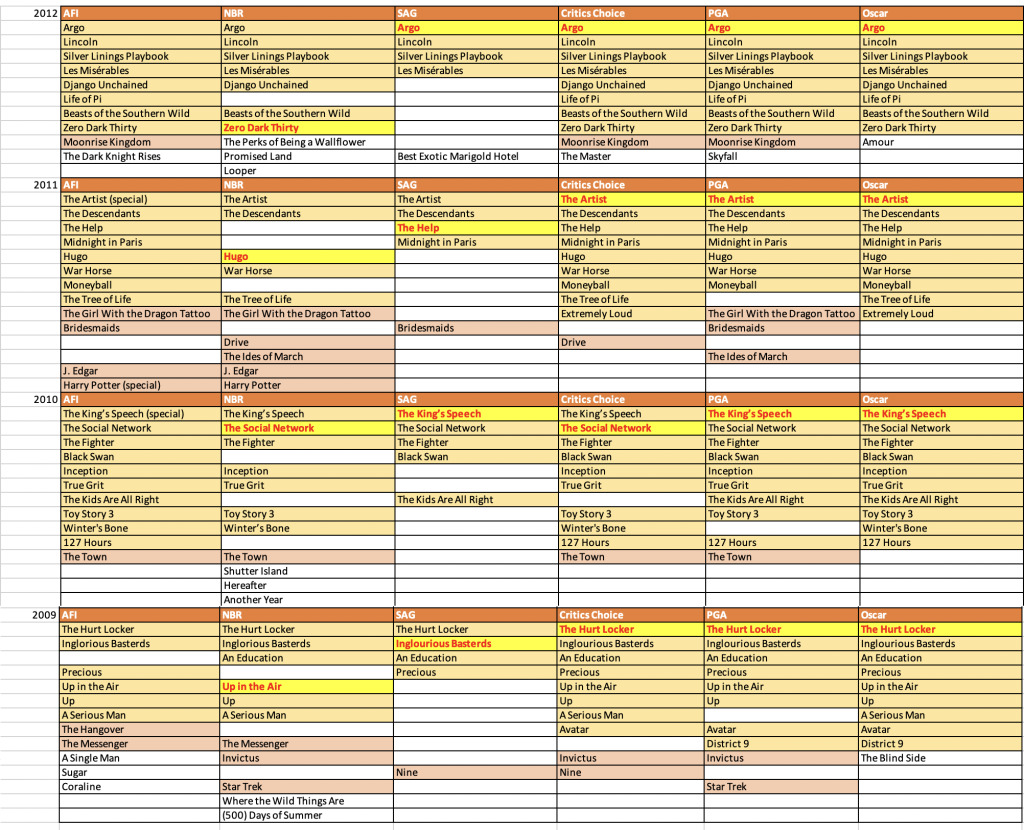