The Curious Case of the Best Actress Race

Throw out the Stats. Anyone can win.

Before we dig into Best Actress, a word.

Something strange went on this past year, in terms of the Best Actress race. There seemed to be a concerted effort to shut out Jennifer Hudson. When Joe Scarborough and Mika Brzezenski on MSNBC’s Morning Joe talked about popular contenders overlooked by the Oscars, they made the point that’s obvious to all of us: Hudson and Lady Gaga had missed being nominated. This represents another narrative that plays out in public that the bubble of Film Twitter and film criticism barely notices: that is, the way many movies people actually watch get passed over.

How you build power in this town is by making a successful movie that a lot of people like and are moved by. Respect nailed that part of it. That metric of its success is clear from its A CinemaScore and its high audience rating at Rotten Tomatoes and Amazon. Hudson has already won an Oscar and would have been heading for her first lead nomination. Having any of the major critics behind her would have helped — but that didn’t happen.

At the New York Times or anywhere else, we never saw Hudson’s name mentioned. This is a group that is mostly white, but has definitely hopped aboard the Woketopian Express and appears to really believe deeply in diversity, equity and inclusion. But they have to add yet another hurdle to that list: film critic cred. They wanted to push a woman of color into the race, but not Hudson, who had delivered one of the most beloved performances of the year, admired by the actual people movie studios supposedly make movies for. Instead, they were really stridently pushing Tessa Thompson, who, no doubt, also gives a great performance in Passing. Everywhere you looked, you saw critics pushing Thompson and completely ignoring Hudson. That’s why it was so surprising when Hudson got into SAG.

Why is it so hard for black women to build any kind of leading role energy in the Best Actress race? It seems like, especially in Hudson’s case, they are almost punished for appearing in a successful film. Like Frances McDormand winning her third Oscar last year, when Viola Davis had yet to win in lead. Or Meryl Streep winning her second in 2011, when Viola Davis could not win in lead. To some, they are punished for the kinds of roles they take (like in The Help), but then are also not rewarded when they play parts like Hudson did — a woman who was not a victim but was instead a champion. 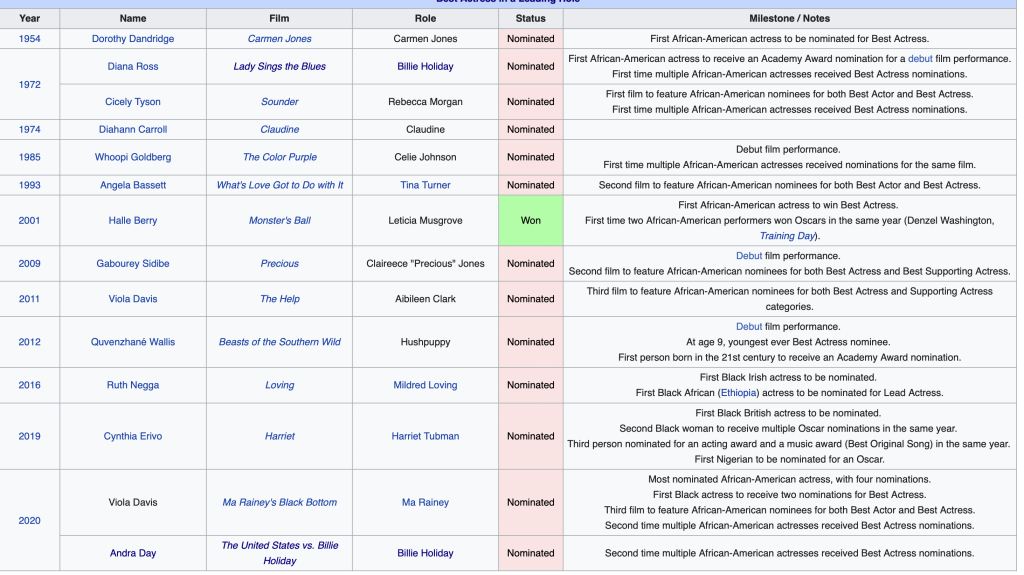 Looking over this list, it doesn’t seem like movies that star triumphant, defiant black women do as well as movies where they play slaves, or characters living in poverty, or during Jim Crow.

I bring this up not to screech about racism in Hollywood or at the Academy. The five Best Actress nominees all give brilliant, transformative performances. Also, since I used to spend a lot of time on the subject of race, racism, and the Academy, I figure I will take this one moment to say something that I found bothersome, even if overall I would prefer the industry and the Oscars focus more on merit. There has to be both an eye on the past and an eye on what was really deserving. It isn’t that I think the five who got in are not deserving. They are. It was an incredibly competitive year. It’s just that the people who talk the talk should walk the walk, and maybe think about why, when it came to Hudson, they were so indifferent.

It is not my intention to make people feel even more guilty so they continue to virtue signal and hand-wring over the wrongs they’ve done to marginalized groups. That is the last thing the Oscar race or the film industry needs: more freaked out white people overreacting. But I would be remiss if I failed to mention the disregard for Hudson by the critics, which I found kind of strange. And for the Academy, missing the opportunity for her nomination feels self-defeating.

And please don’t say “maybe she just wasn’t good enough,” because it isn’t true, but also that hardly matters when it comes to the Oscars. And she was plenty good enough.

Okay, the lecture is over, and now onto the main course.

Throw out everything you know about the Oscar race. Any of the Best Actress nominees this year can win and stats won’t help us know who’s most likely.

Let’s start with Oscar Precedents. Usually, they can be divided into:

Never won before, with heightened urgency to win (Jessica Chastain)
Already won, but the Academy just can’t get enough (Olivia Colman)
Already won, but harder to win a second (Nicole Kidman, Penelope Cruz in supporting)
Brand new to the scene, might win in a Cinderella-like shocker (Kristen Stewart)

Of these five, only Chastain is in the highly overdue category.

Only three of the Best Actress nominees have a SAG nomination:

The last time only three SAG actresses got through to the Oscars was in 2015, which was the year Spotlight and The Big Short were the only Best Picture contenders with a SAG ensemble nomination. This means the nominating committee was out of sync with the actors in the Academy. Spotlight ended up winning that year, and then the Oscar. Brie Larson won the Globe, then the SAG, and then the Oscar.

It is unheard of for an actress to win an Oscar without a SAG nomination in the entire history of SAG. But in a year like this one, odd things might happen. For instance, Spotlight ended up winning only two Oscars: Best Picture and Original Screenplay.

A similar thing happened in 2012 — there were three actresses at SAG that went on to the Oscars. That was an odd year because Ben Affleck and Kathryn Bigelow were also left off the Best Director list at the Oscars. But Argo dominated, winning even the SAG ensemble award, while Jennifer Lawrence won the Globe (Comedy), the SAG, and the Oscar (Amour’s Emmanuelle Riva won the BAFTA and Chastain won the Globe (Drama)).

In 2003, another year where no Best Actress nominees appeared in Best Picture contenders, only three from SAG got into the Oscars. Charlize Theron won the Globe, the SAG, and the Oscar for Monster.

Finally, the last year like this was 1998, when it was Gwyneth Paltrow for Shakespeare in Love against Cate Blanchett for Elizabeth. Both won the Globe, but Gwyneth Paltrow won the SAG and the Oscar too.

So in general, at least with these kinds of years, one contender sweeps through. If that holds true again, it would seem to tip the race in Nicole Kidman’s favor. If she wins the SAG, there’s a slightly greater chance she will win the Oscar.

BUT. These are COVID times. That means all bets are off. The only example we have of COVID times was last year when a different person won every group. Andra Day won the Golden Globe, Viola Davis won the SAG. Frances McDormand won the BAFTA and then the Oscar.

Next, The Oscar Story.

An Oscar story is usually what drives the narrative that drives the win. The trick, though, is knowing what narratives are actually at play in the minds of voters, as opposed to, say, Film Twitter. We have our own narratives that aren’t necessarily the same narratives as the voters or even the public. But let’s give it a whirl anyway.

Nicole Kidman — She’s enjoying a late career renaissance, and hits it out of the park with Being the Ricardos, a role many thought she was wrong for.

Jessica Chastain — A shapeshifting actress who is long overdue for a win dives into a project she’s been developing since 2012 and becomes Tammy Faye Bakker. It is a remarkable role that required she sing her own songs and transform her face and body to look like Tammy Faye.

Olivia Colman — Already won in a surprise twist for The Favourite, besting Glenn Close. Her speech was so funny voters might want to see her on stage again in another surprise.

Kristen Stewart — She was the frontrunner to win for a very long time, but seemed down for the count. Perhaps not getting a SAG nomination recharged her contender energy, as people realized she might miss a chance at a nomination.

Penelope Cruz — Legendary for working with Pedro Almodovar as his muse, and now anchors what is perhaps his best film.

Which of these backstories will be a stronger driving narrative? It’s hard to say at the moment. It’s early yet. We have to watch and wait to see what the press does, what the SAG does and how it all shakes down.

Honestly, any of them could win, especially without a Best Picture contender driving any of them. Right now, though, it seems to many that Kidman has the lead.

The charts (with the help of Marshall Flores) 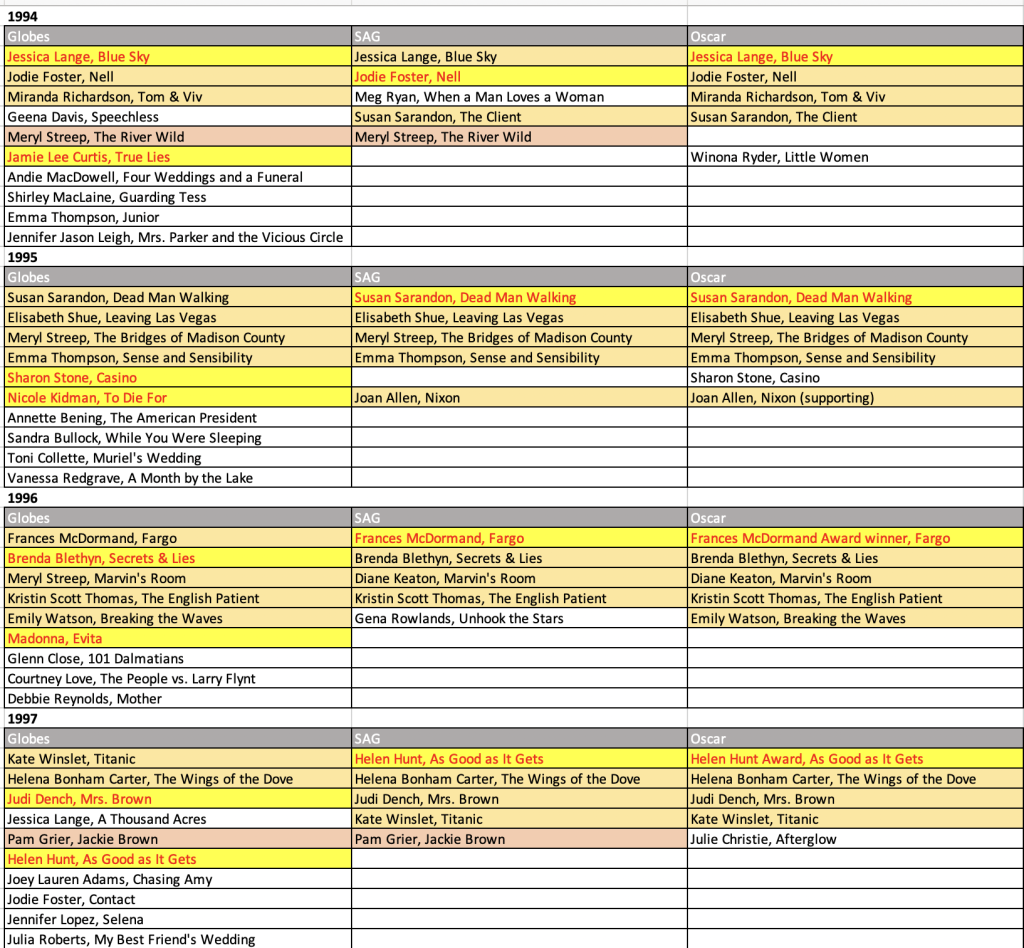 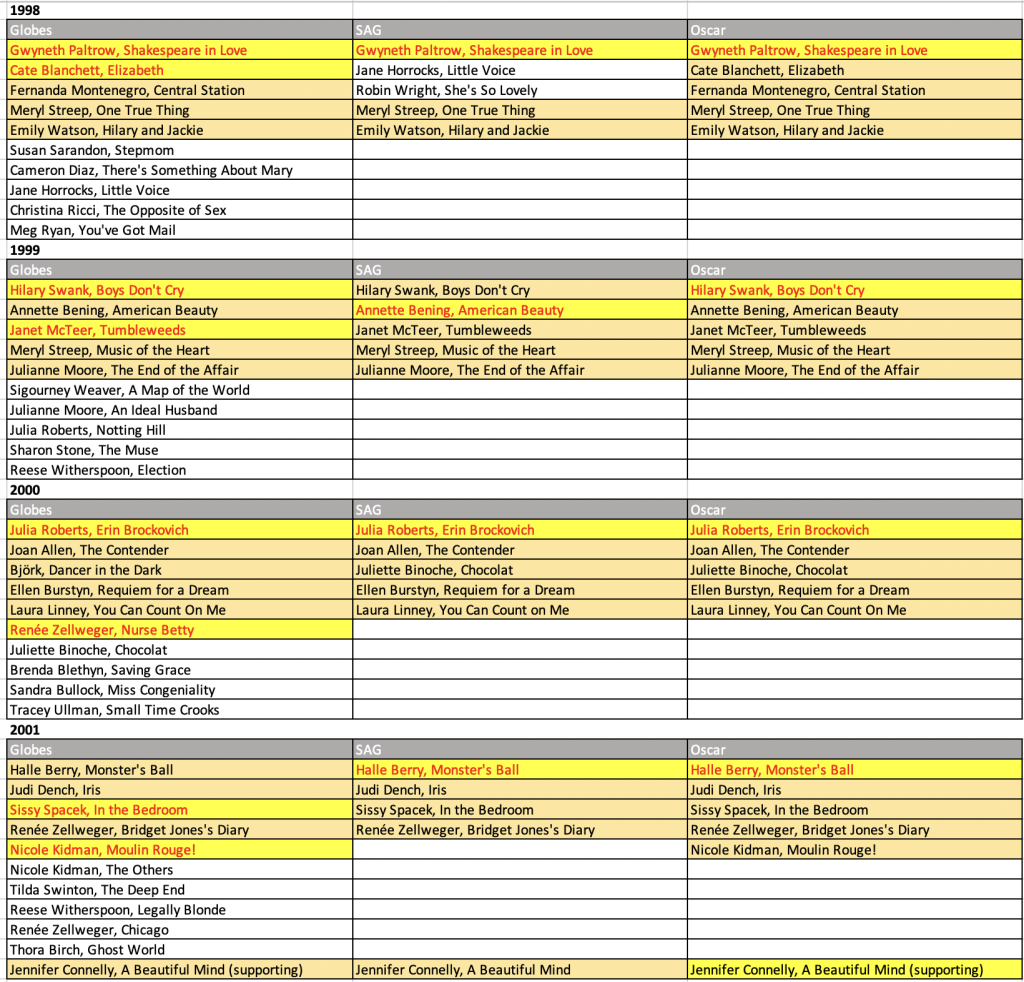 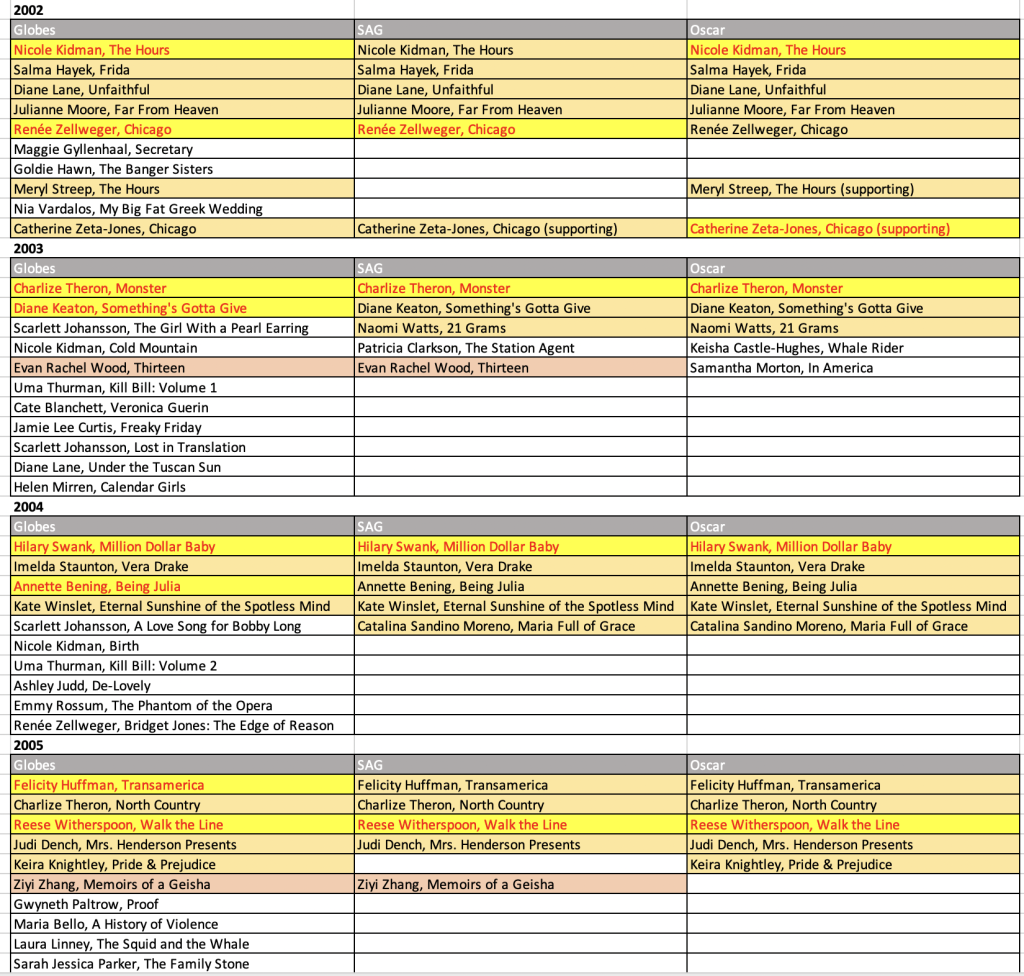 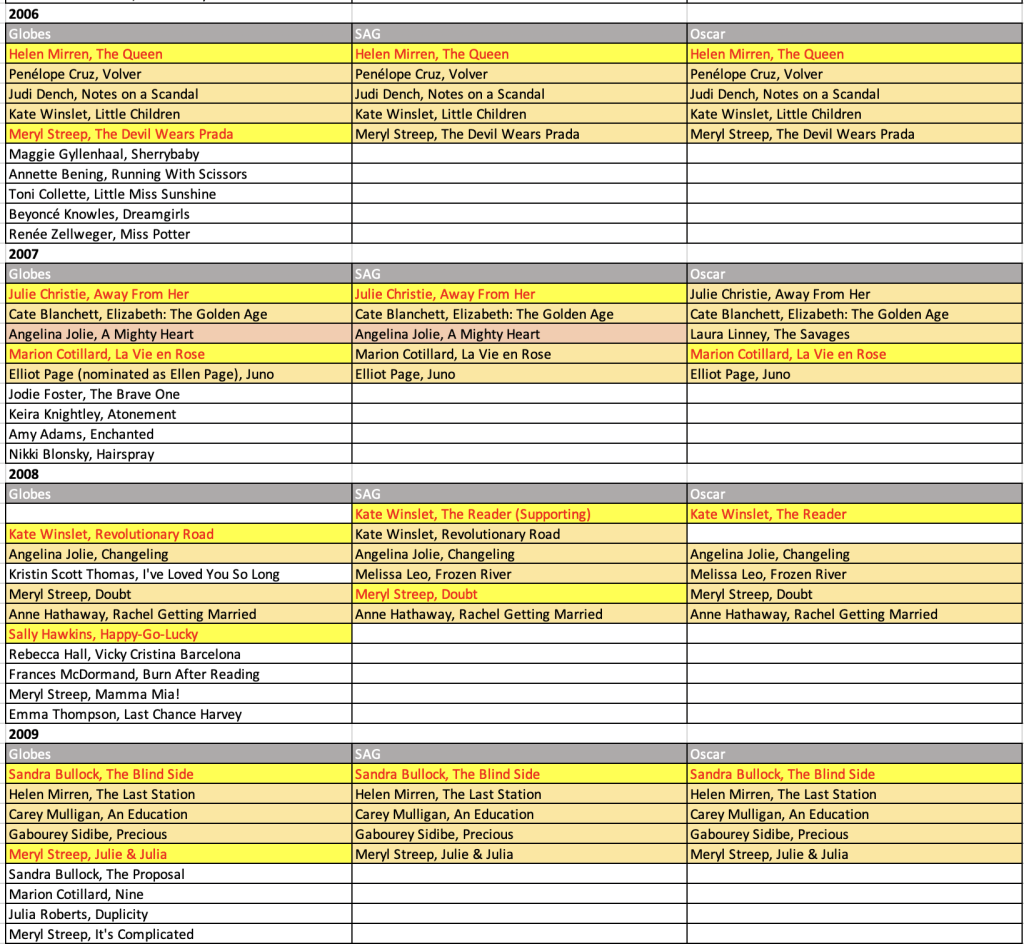 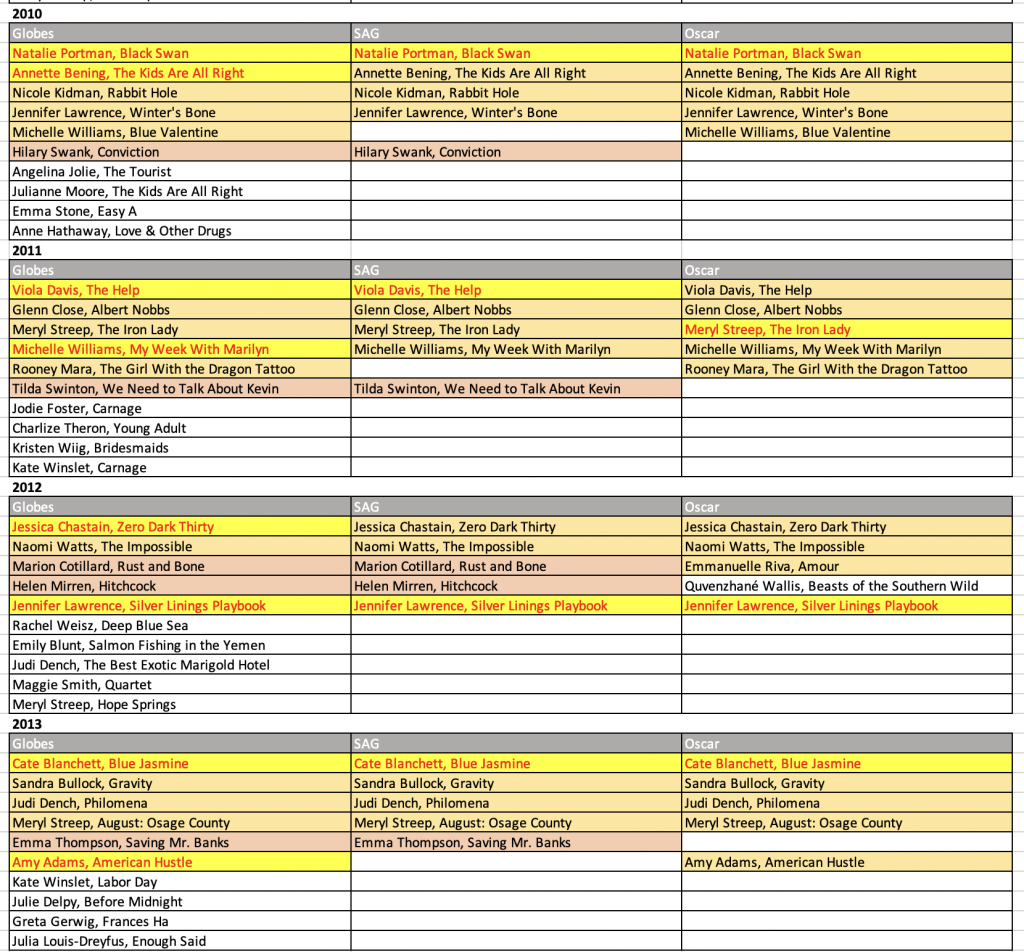 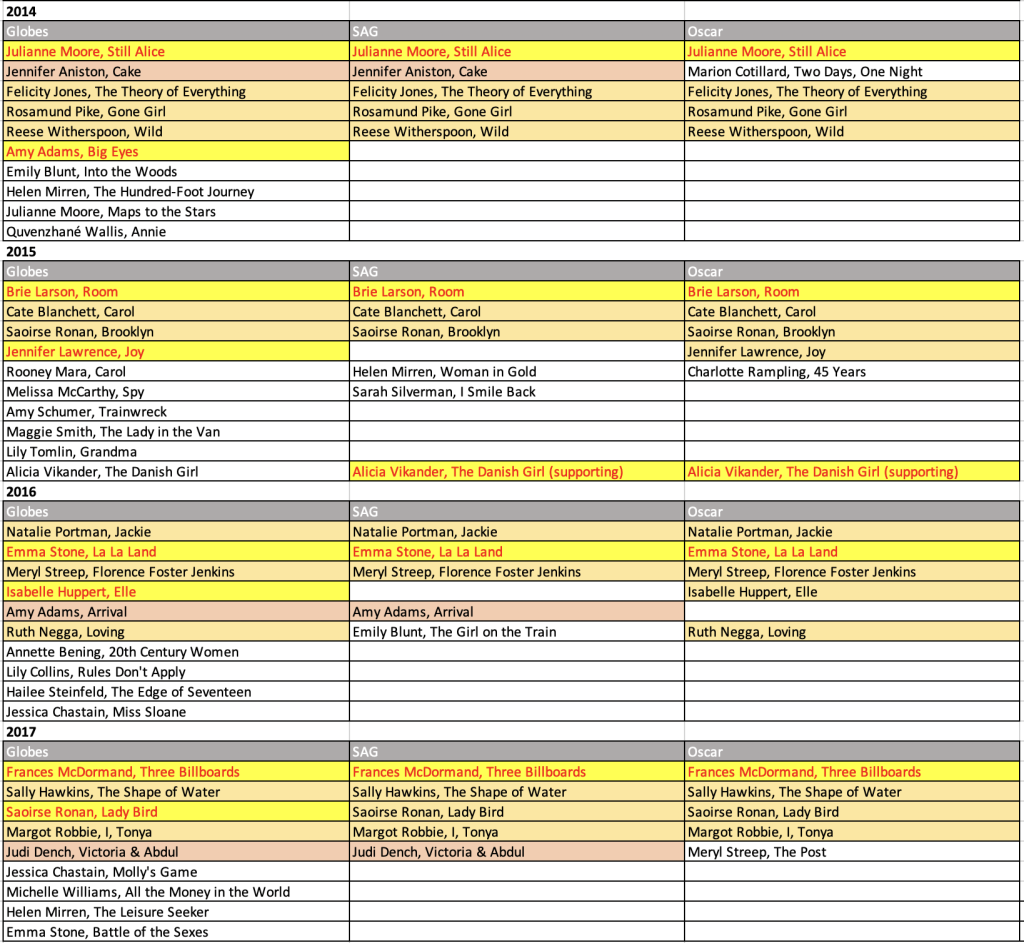 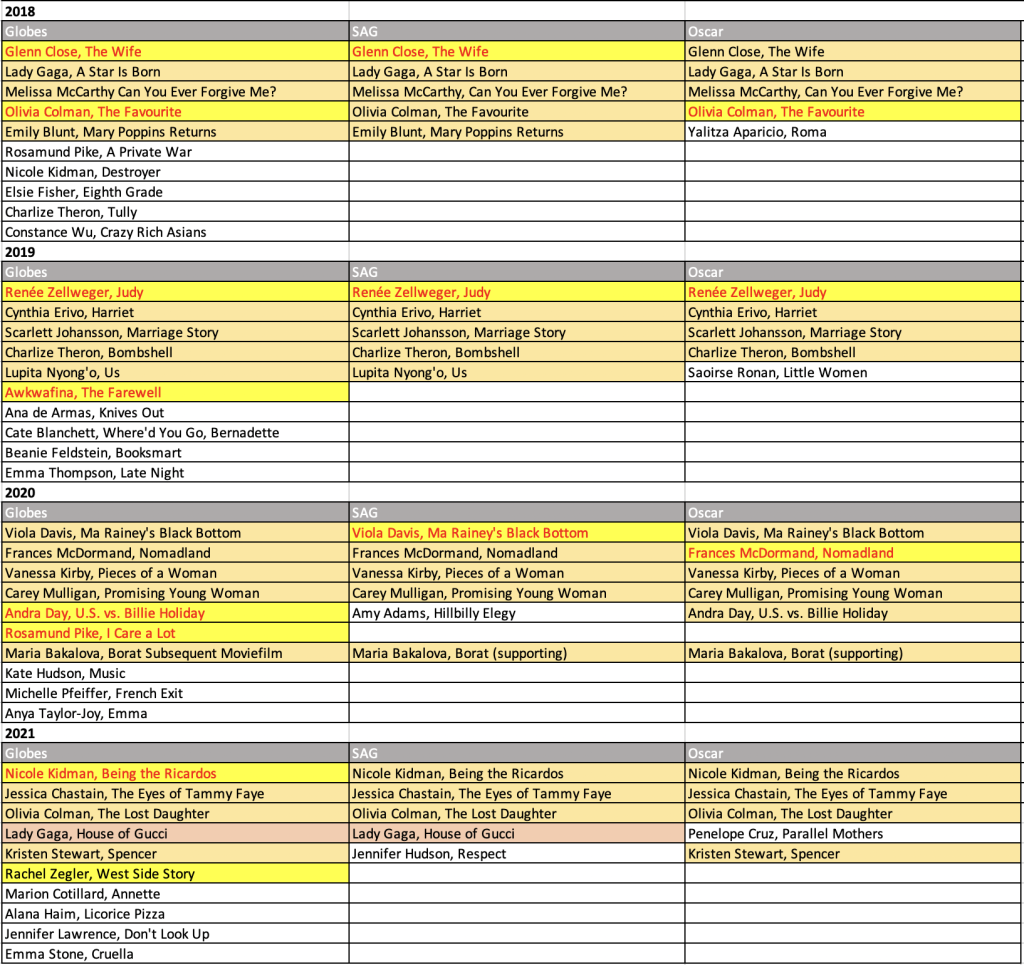