SAG Preview – It’s All About the Actors

The Oscar race and the Oscar ecosystem are shifting.

How could it not, right? With so much going on in the world and in our country? The industry is changing. Demographics are changing. The first year I covered the Oscars was the Gladiator vs. Crouching Tiger, Hidden Dragon vs. Traffic year. Since I’d just started my website in 1999, there were no grooves for where the Oscar race headed. As the years ticked by, we would map the race with the guild awards, the critics awards, and the Oscars, as though it was one steady path to a final destination. But the Oscars, organically, are not like that. They were never really meant to be seen on any kind of breadcrumb trail where one award begets another and another.

Those of us who track the trace tend to see things as an if/then scenario. If Kristen Stewart missed out on the SAG Awards, then she can’t win the Oscar. We already know that the SAG Ensemble stat is no longer infallible. A film can still win without one. We also know the Oscar Best Director stat doesn’t matter. A film can still win without one. All it takes is a first time for something to happen to change the way we view the race.

This year was yet another unusual year, not just because of COVID but because the Golden Globes broadcast was canceled as a live event. We still got the winners, but the impact of watching them win was not felt. We also don’t know how the big shows coming up will influence the race, where the buzz will go, or what the conversations will be. It is all very fluid still. It feels like any film could rise up now and win.

But still, only once in Golden Globes/SAG/Oscar history has any person won without either a Globe or SAG nomination, and that happened the first year I began, 2000. And it happened with Marcia Gay Harden, who really played the leading role in Pollock. 2000 was a crazy year. I clearly remember how crazy it is by tracing backward the movies we all thought had a shot but movies that, in the end, had no shot.

2000 was a year where one person seemed destined to win the Oscar. That was Kate Hudson in Almost Famous, who won the Golden Globe. But that was when the Oscars were held late at the end of March as they are this year. When Almost Famous failed to earn a Best Picture nomination, that dinged it a bit. By the time the SAG Awards rolled around, Hudson lost to Judi Dench for Chocolat. That film was being pushed by the Weinstein awards machine. Despite how much the critics hated it, the actors loved it. They loved it so much they awarded Dench. 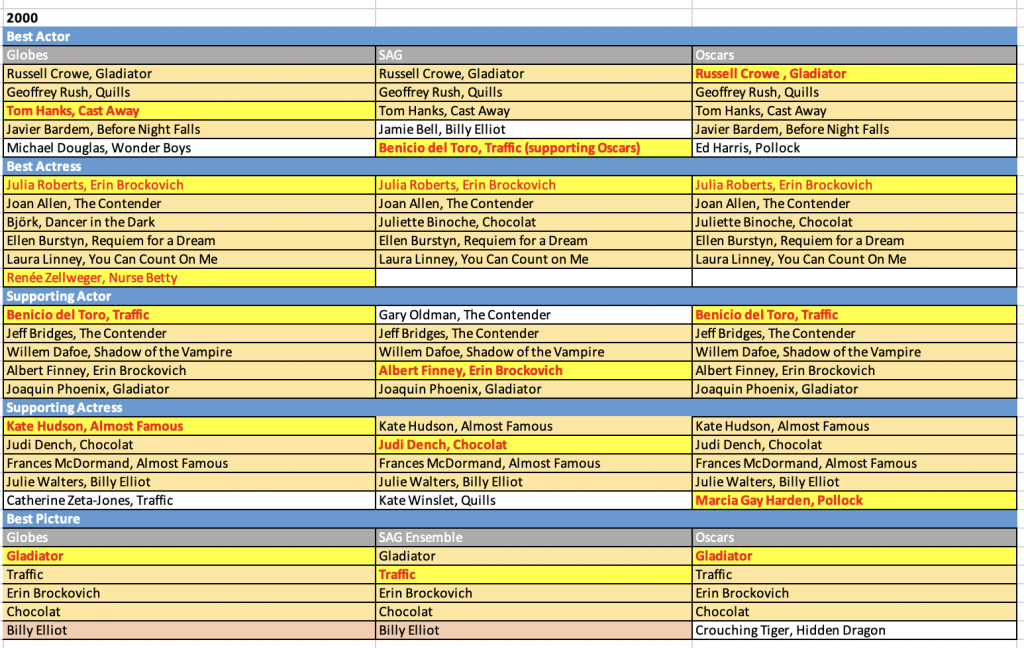 Now we had two winners: Kate Hudson with the Globe and Judi Dench with the SAG. That meant there was a good chance they could split that vote. At the same time, I also remember chatter and buzz over the movie Pollock and the two brilliant performances that anchored it: Ed Harris and Marcia Gay Harden. Harris was considered at that time overdue for an Oscar. I knew enough back then that it was kind of a big deal that he’d made Pollock. But no one predicted Marcia Gay Harden winning that night. It was a complete shock, something that has never happened before or since.

There definitely was chatter and an underdog story with Pollock, as I recall, which is why Harden references people watching their movie in her acceptance speech. One of the narratives was that it was the best performance of the bunch but that no one had seen the movie. When you look at Harden’s work in the film, you can see that it’s not only a lead role, but it’s also the most emotionally challenging of the bunch. If you just look at the performances, then you can see which one stands apart, regardless of the buzz generated for the other actors. Probably without Dench, Hudson might have won. Without Hudson, Dench might have.

Vote splits sometimes happen when you have two very strong contenders competing for the same votes. We might have seen this last year with Andra Day for United States vs. Billie Holiday and Viola Davis for Ma Rainey’s Black Bottom. Maybe. We might have seen it the year that Jack Nicholson in About Schmidt was up against Daniel Day-Lewis in Gangs of New York, leading to Adrien Brody winning for The Pianist.

And we might see it again this year with Nicole Kidman in Being the Ricardos up against Jessica Chastain in The Eyes of Tammy Faye, unless her main competition is Olivia Colman in The Lost Daughter. This year is so strange that it’s hard to tell which direction it’s going to head in. Anything can happen.

What seems less likely, though, is that those that are not nominated for the Globe or the SAG probably don’t have much of a shot at winning unless we’re betting on the super long shot. Likewise, those not nominated for the Oscar have a much less likely chance at winning the SAG. It has happened in the past, but you just have to figure how many oddities are going to make it into one race.

Having a corresponding Best Picture nomination is also a good thing, even if none of our five actresses do.

That makes the various contenders that have the best shot of winning at the SAG: 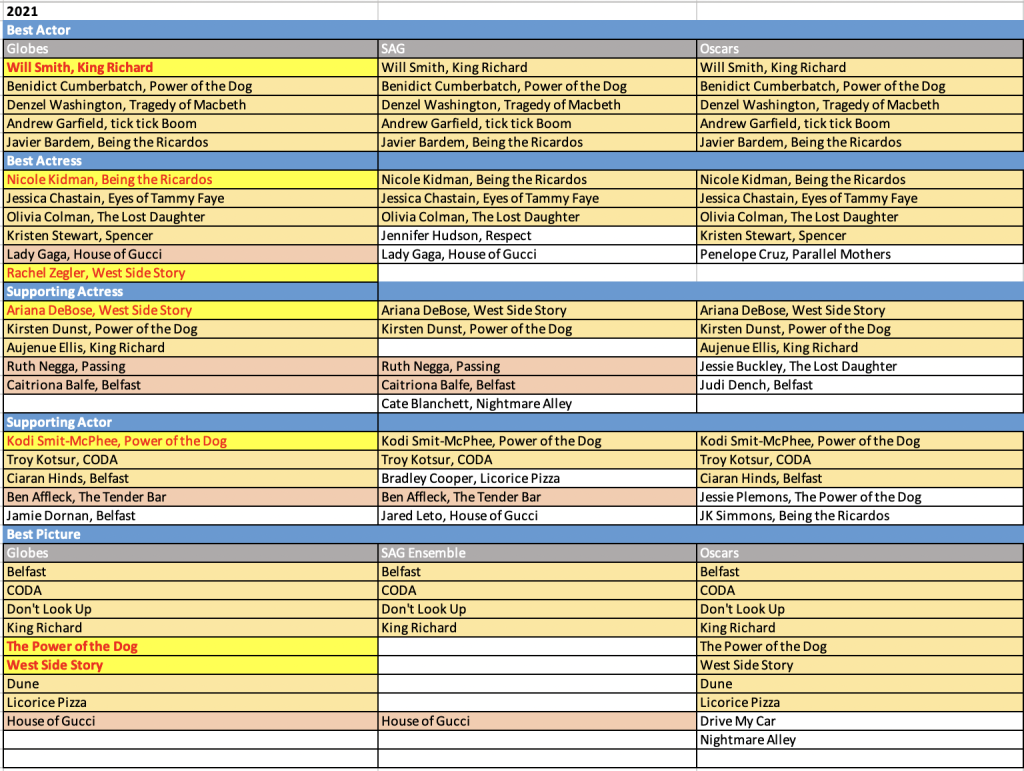 But if, say, anyone other than Nicole Kidman wins the SAG, then we definitely have a potential for a shocker at the Oscars.

We don’t know if we have a year where everything lines up perfectly, like the Birdman year: 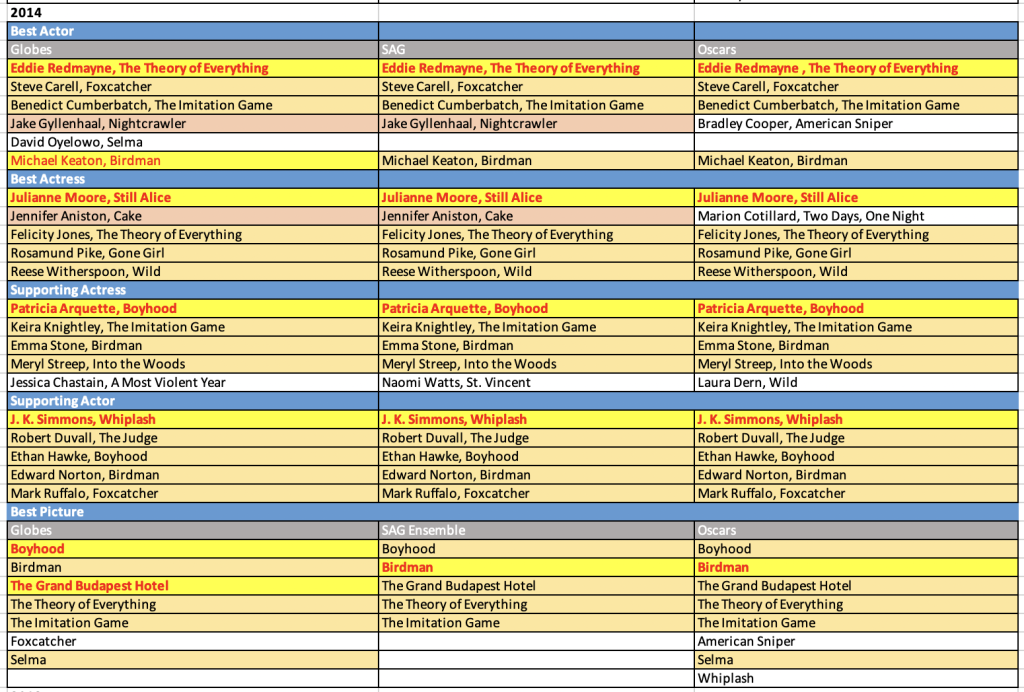 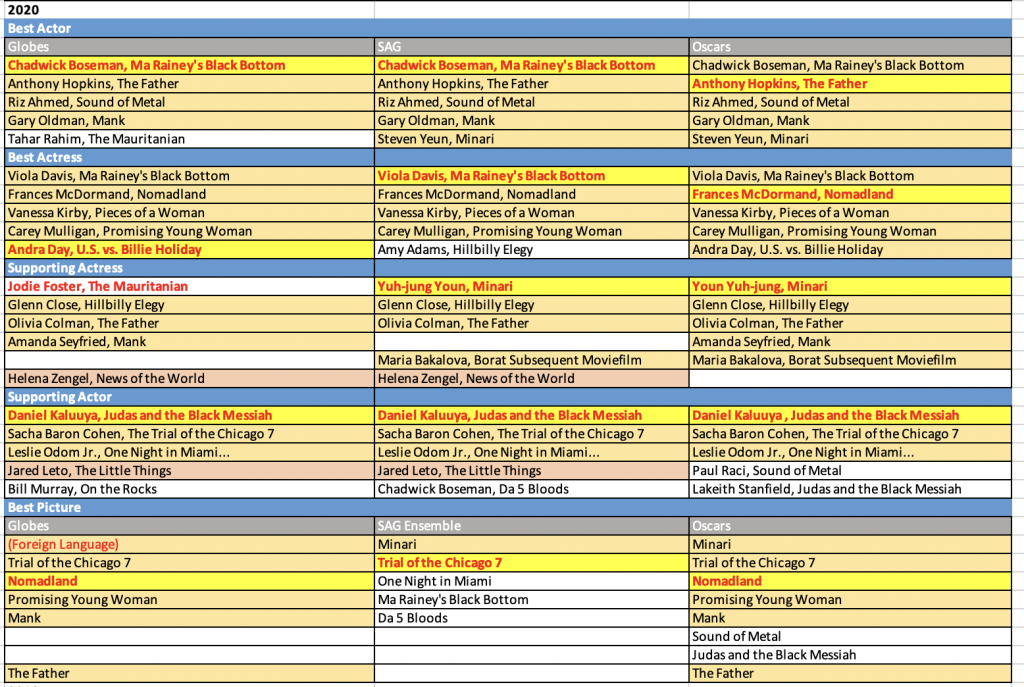 The categories seem like they could be wide open with the possible exception of Best Actor, which is likely going to Will Smith. After that, though, there are many different scenarios that could play out. In 2012, the SAG united with AFTRA and their membership rose to 150K. When that happened, they were no longer just actors, but actors along with journalists and TV personalities and various other sorts that make these awards much more populist than any other. They aren’t just people who work in the insular film industry, but people who work outside of it.

That means it will be interesting to see just where this goes on Sunday.

You can find the Oscar Squad predictions here.