The Oscars will Pre-Tape Eight Categories to Speed Things Up

But the problem is much bigger than that

Scott Feinberg got the exclusive at the Hollywood Reporter that the Academy has made the decision to pull the presentation of eight categories from the Oscars live show to tighten things up a bit. They will still be seen on the show but we won’t see the them announced live. Rather, they will be held one hour before the live Oscar telecast. It will still be fun for the contenders. I’ve been attending the Oscars for several years now and the excitement is in the room, people, not on TV. But either way, it’s a bummer for those of us who hang on every second.

From a letter sent by AMPAS President David Rubin to members:

I don’t blame the Academy for doing whatever they can to make good on their contract with ABC to have some bump in the ratings. They’ve hired hosts, they have effectively included a “People’s Choice” award, and now they hope to nip and tuck a few minutes off the broadcast. But here’s the thing: it won’t make a difference. The problem is much bigger than the length of the show.

The reason people have tuned out the Oscars isn’t that the show is too long. The problem is systemic to the awards industry overall (in my opinion). They (we) have become elitist, isolationist, and terrified of making the wrong move, offending the wrong person, and god only knows what else. The fear is palpable. It is in every decision they make, and every decision every production company makes. They are afraid of the thought police and the behavior control army that watches them and everyone else for one false move.

The problem with the Oscars reminds me a lot of the same problems the Democratic Party has right now — they are too constrained by a small but vocal minority of voices or Twitter and in the media to make the kinds of big moves they need to make to boost their ratings, or to boost their poll numbers. There is very much an “elite” vs. the “huddled masses” situation that has formed in the wake of the Trump presidency. While Hollywood and the Oscars have more or less leaned left for a few decades now, they never became actually united with the Democrats the way they did in 2016.

The effect of that was the shows became more overtly political. So much so that every big movement on the Left, whether it was the #MeToo or the Black Lives Matter protests, was part of the show. Every person giving a speech was expected to make a political statement. The entire show last time was a political statement. Everything became political and everything had to be an “us vs. them” kind of politics. But aren’t the Oscars for everyone? Shouldn’t they be?

Every host has to be Twitter-proof. No movies, no filmmakers can have any “baggage.” Everything has to fit a set of criteria to please the people they need to please to spare themselves the headache of bad press. It isn’t so much that they have alienated the Trump supporters and half the country (they have), but it’s that they’re also alienating moderates who might ordinarily watch but won’t because they don’t want to be lectured by the privileged class. My daughter and her friends, for instance, don’t watch the Oscars because they think they aren’t really about quality anymore but about fulfilling a political agenda.

Compounding the problem is that no one is really allowed to say so out loud lest they face the scourge of Twitter, aka the “Thunderdome.” No one is spared: not journalists, not comedians, not politicians. Bill Maher and Joe Rogan are about as subversive as the Thunderdome will allow, but only just barely. If Twitter could fire both of them tomorrow, they would. Film and Oscar Twitter are part of the same organism. As we speak they continue to condemn and criticize and mock the Academy for introducing a People’s Choice award. The peasants, after all, should not factor into Hollywood’s biggest night.

I personally had no clue how the industry looked from outside of its bubble until I made the effort to get to know the world of those excluded from it. Once I could see how “we” looked from their eyes, my perspective changed. I saw how insular the industry and the Oscars have become. Every movie nominated, every win reflects the world view of the political Left. That interests film critics, Film Twitter, and highly educated journalists, perhaps film students here and there. But overall, they no longer matter to the broader public because they don’t consider them to be worthy of their attention. I think that’s a shame.

The problem for the Academy, the Oscars, and the industry overall is much bigger than these kinds of fixes. But remember, just because you make Twitter mad doesn’t mean it won’t help boost ratings. Have you ever noticed how it’s the people in first class who are usually the people who complain the most? The more they have, the more they are catered to, the more they complain. People in coach have to just sit there and take it because they know it will be pointless to complain about legroom or the food. And so it goes with Film Twitter and the Oscars. They don’t see a problem because they get to see movies for free. Great movies. Movies they love. But the people? Let them eat Marvel. Maybe ratings will rise. They have nowhere to go but up.

I am sure people are angry about pushing the categories off the air like that, just as they’re angry about the Fan Favorite award. But guess what, folks? You helped build this mess. We all did. We all contributed to putting the Academy in a place where they can no longer draw and audience. And by the way, it isn’t just the Academy’s ratings that suffered after 2016. SAG’s ratings did too: 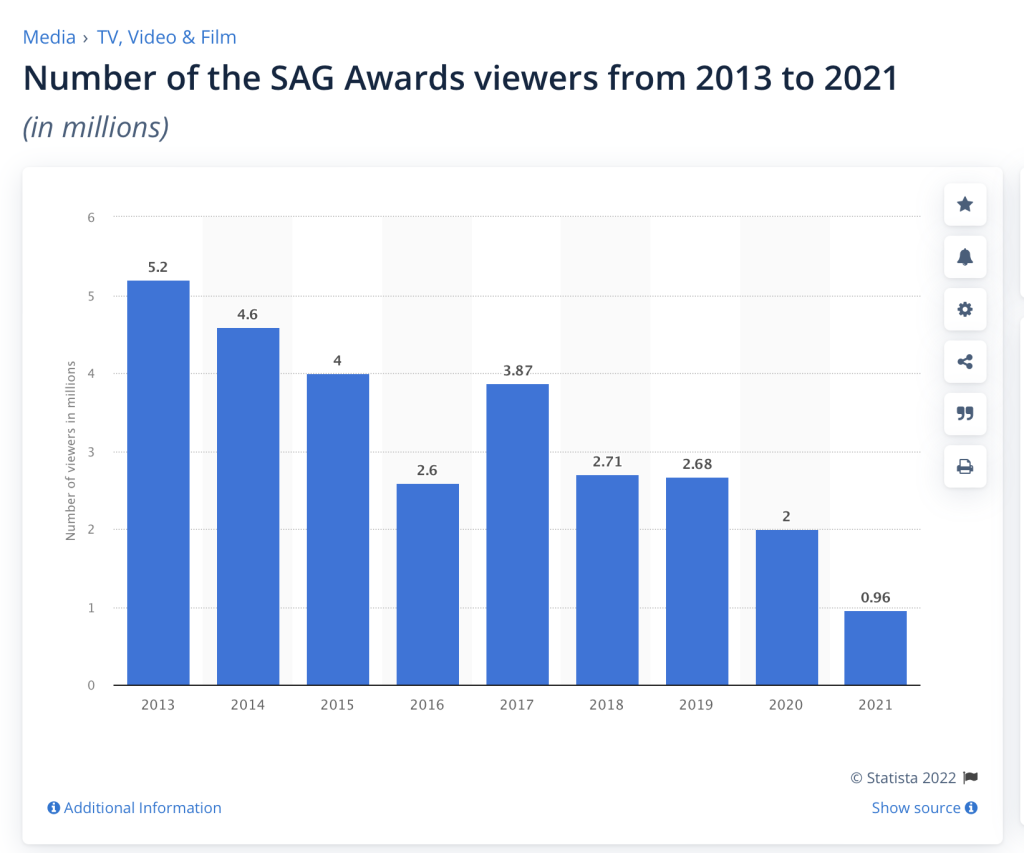 The only show whose ratings did not decline were the Golden Globes because they mostly and successfully kept politics at a minimum and more importantly, weren’t afraid to put someone like Ricky Gervais on the air. 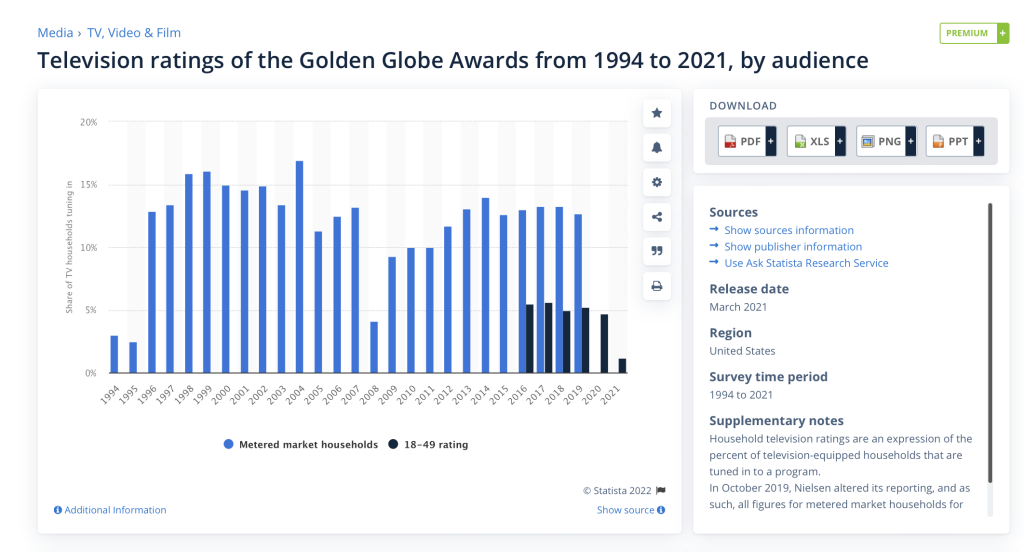 But I don’t blame them for trying.  I hope they get a ratings bump because I for one would like to see the Oscar telecast survive. I would also like to see them flip the bird at the bird app. I don’t want them to fade into obscurity. Maybe that’s because I get letters every year from people who have grown up on the Oscars. It was always such an exciting event. It still can be an exciting event. They just have to learn how to stop worrying about the cabal that micromanages them. Remember the people. They matter more.