Does Politics Turn People Off at Awards Shows? A New Poll Says …

by Sasha Stone
in News
62

There is a great line in John Carpenter’s pitch-perfect horror film The Thing when MacReady has to test himself to see if he is the “thing.” As he’s about to do it he says, “Now I’m going to tell you what I already know.”

We didn’t need a poll to tell us what we already know. Anyone who covers this beat knows that the awards shows of late have become, well, about watching the most privileged people in the world signal their virtue and their suffering. Or, as Richard Rushfield puts it in his “state of the industry” piece, an exceptional piece of writing you won’t see anywhere else (because most who cover this industry are clutching their hearts and balls in fear):

Making our internal problems the central message of the Oscars have, at this point, just about killed the show. Maybe this year will be the coup de grâce when literally not a single person who isn’t related to a nominee watches. The show will be hard-pressed to recover from a few years of pathological self-absorption. In the past two years, even as the world went through its greatest trauma in decades, we couldn’t take the focus off our own sanctimony, squabbles and self-inflicted wounds to offer even an ounce of comfort to our loyal audiences.

Forget about who takes the trophy in the end. This will go down as the year when our greatest advertisements for ourselves ended up on life support. Of the two major awards events, Hollywood euthanized one (the Golden Globes) and the other is veering dangerously close to the edge. This is not how a winning team plays.

The question is: will we treat the death of the Oscars as a warning sign for all Hollywood? To get your s*** together and stop treating access to the stage as license to carry out a public group therapy session?

Or will we do the Disruption Shrug, write it off as something we don’t need anymore and get back to filling the firehose?

On the one hand, we’re all lucky we are protected enough and privileged enough to live in a country where the biggest problem is something someone said on a podcast or shouted in Congress during the State of the Union. That these things upset to us to the degree that they do is proof that, well, let’s just say our perspective is slightly off compared to, you know, handing your baby over the fence to an American soldier, or trying to get cash from a machine that has cut you off in Russia, or trying to escape a building before it explodes. You know, stuff people in other countries like Ukraine and Syria and Afghanistan have to deal with and we kind of don’t? Twitter angst? Is that anything worth anything?

Rushfield goes on to offer up some fixes going forward and they’re well worth a read. But I’ll just say this much – listening to Twitter is what is making it harder for the Academy to right the ship. When we as a culture stop reacting to things people say as the worst thing imaginable I think that is when we’ll be closer to where we need to be.

Everything feels suspended in Hollywood because of the climate of fear. Storytelling is way too careful. Jokes aren’t or can’t be funny anymore. The most valuable asset in a community of very wealthy, very powerful people is their status which is achieved by being thought of as good. But to be a great storyteller, an honest and brave storyteller, to make great films and tell great jokes – you have to be fearless and what your saying, the story you are telling has to be able to fly beyond the confines of the Church.

Sooner or later, because this is still a market-driven country, eyeballs and attention will find the good stuff. It might be outside of the reach of corporate Hollywood but it will live. It has to. It always has.

The thing that is killing the ratings for the Oscars is that they have become insular, cliquish, and elitist. Everyone knows this and yet few know what to do about it. Well, the first step is to do what Joe Biden did last night – he didn’t spend one minute of his speech criticizing the half of the country that didn’t vote for him. The hosts for the Oscars shouldn’t do that either. They should make the assumption that everyone in this country is watching their show, no matter what they believe or whom they voted for. The only jokes that make fun of anyone should make fun of the privileged class, not the middle or working class. The second they make it about Trump or politics or anything on those lines people will shut it off.

Also, what Biden did in his speech was, I thought, healing to a fractured nation when he asked us to unify. That is what the Oscars should be. They shouldn’t be a secret club for the cool people. Anyway, it’s worth a shot.

And by the way, why do I go on and on like this even when it means more screeching and bullying and harassment online? Well, it’s a dirty job, friends, but someone has to do it.

The good news is the people polled still trust the Academy Awards, even if they don’t use the nominations to choose what films to watch. What that tells me is what my daughter and her friends have already told me – they don’t think the Oscars care about awarding “best” anymore, that they are serving some kind of social justice cause. But those polled somehow still see the Oscars as legit.

They also seem to be inclined to look at Rotten Tomatoes’ scores – whether by critics or audiences – when it comes to choosing what movie to watch. We all do that, right? Don’t you look at review scores when buying something? You want to know just how bad it is. The problem is that, at least in my opinion, if you are going to go by ratings, the audience is probably more reliable. The critics are often the polar opposite of what audiences think.

Here are the polls from DISH: 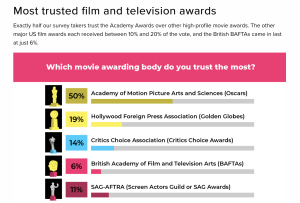 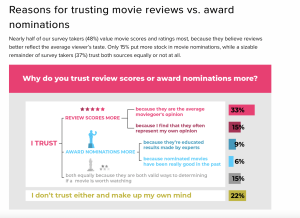 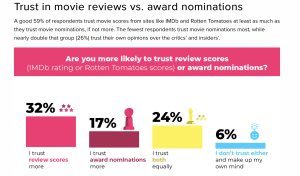 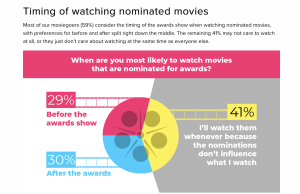 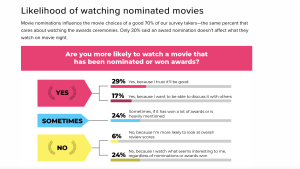 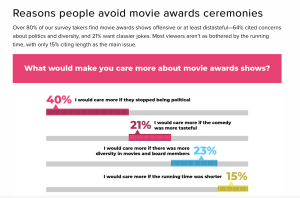