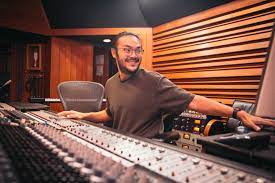 Alvin Wee served as the score mixer for Disney’s Academy Award-nominated Encanto. Here, in an interview with Awards Daily, he details his work with composer Germaine Franco in creating its distinct sound, which included authentic Columbian instruments and choirs. He also discusses his work in video games and podcasting. And, yes, the classic Mario Brothers score lives rent-free in his head as it does everyone else!

Awards Daily: So I just talked with the composer for Encanto, Germaine Franco. What was it like working with her?

Alvin Wee: I just adore Germaine. We go way, way back. She took a chance on me when I was still fresh on the scene and we have been working together ever since. Every time she calls I get really excited because she is, like, ‘Hey. I got this thing.’ With Encanto she said, ‘I got this thing. I have a couple ideas about music from Colombia.’ I was, like, yes! I went straight in, and it was a complete joy all the time speaking with her and working with her.

AD: You’ve already touched on my second question. She mentioned traditional Colombian instruments used in the score like arpa llanera and the tiple. Did that give you any particular challenge?

Alvin Wee: The arpa llanera is an interesting instrument because it has these small little knobs on top of it that are like switches where you can change the tuning of each string, and so while they play they’re changing the tuning on the fly. This really talented player from New York–I think his name was Edmar–was able to dance and play the instrument. He was a genius at playing it. Recording it was relatively fun and not as hard as I thought it would be, so there was more of an excitement. The tiple is just like a guitar but strung high up so more like a dobro. While recording it I just wanted to make sure that it wasn’t feeling like the only instrument in the score. Germaine and I talked about that and I think that we managed to come up with a way of recording it to make it sound as beautiful and as full-bodied as possible.

AD: I read that in the Antonio’s room scene you used a Colombian choir and a marimba. What was that like?

Alvin Wee: The Columbian choir was great because Germaine and the folks at Disney were like they wanted the actual spirit and excitement of people performing songs in Colombia. So they recorded the choir in Columbia using computer software to monitor from LA and it made the track. You can feel the joy and the excitement and how much they were into the music and it made Germaine’s P & Q’s in that section shine. And to pair that with the bass marimba that I think Germaine had specifically made for the score, it felt more authentic like you were there and you felt the celebration of the people.

AD: There was a lot of blending of musical theater with the traditional Colombian music. What was the process trying to combine those two?

Alvin Wee: That was actually a fun part for me. I came into it loving musical theater and loving all this traditional music that we get to explore all throughout the score. There was obviously a lot of study, a lot of learning about it, familiarizing myself with the music and what Germaine has written, and also how the traditional way his music sounded in his native homeland. Then there was the idea of okay, how do we make this sound just as broad and wide as what you see on the screen? How do we bring that idea and translate that to this musical experience? So I worked closely with Germaine to get her score right, and I also worked with my good friend David Boucher, who was the song mixer, to make sure that we worked in sync with a lot of what was happening in the song and in the score and what was blending between that. I think this close-knit conversation that was being had all throughout the score made it very easy getting it through and blended together.

AD: I’ve seen you’ve done work on some very big video games: Uncharted 4: The Thief’s End, Metal Gear Solid V: The Phantom Pain, Kena: Bridge of Spirits… What got you into doing video game work, and are you a gamer as well?

Alvin Wee: Yes I am! Actually you know what, I started as a video gamer when I was young. I grew up in Malaysia and we had that one video game that our friend had and we would go over to their house after school to play. You know how the soundtrack of Mario Brothers gets stuck in your head? Well, back when I was growing up it was the Final Fantasy score, and so video games were a big part of my growing up. So when I moved over here to Boston suddenly I got the opportunity after graduating to work with one of the composers of Final Fantasy XIII. That is how I got my start into mixing scores of orchestral music and music for media. From then I transitioned into doing a lot of films and television and having my feet in both worlds a little bit, so I can feed the soul on both ends.

AD: I saw you recorded the podcast The Left Right Game, which I recalled when I listened to it really played up its audio experience. How did you get involved in that and what was that experience like?

Alvin Wee: Oh wow, The Left Right Game! First of all that was one of the most groundbreaking experiences when it comes to scripted dramatic podcasts. I knew the guy from QCODE Media who is now their head engineer, Ryan Walsh. We used to work together. We did a film together about three years ago called Little and he got into the world of podcasts because I think that was his passion. So they brought me into record and set up the world with all the actors that were there and try to create this immersive experience when you listen to a podcast. It was one of my favorite experiences when it came to doing something that was completely out of my comfort zone and learning. Immersive has been a thing for a while in theater and people have been trying to adapt it to expand podcasts and just weave the storytelling aspects of it. Plus working with Tessa Thompson. It was one of my favorite experiences going into podcasting.

AD: You mentioned with the song mixer you would work together on certain things. How does that process work exactly for you to combine your different music?

Alvin Wee: There’s a lot of software that we use and we want to make certain we have a lot of sonic compatibility when it comes from one part to the other. We had a lot of respect for each other so we had a brief chat and then we had our initial setup of him being okay, here is what I am doing and these are the things I like using, these are the reverbs that I use, etc. I will be, like, great, awesome, and I use that too so we just make certain that the settings are right and that it feels correct. I feel like it’s in the same world. So, to kind of check up on each other there will be handing over of files. We want to make certain that the end of the song is exactly where the score starts, or before the song starts there is the score, or in parts where there are intros to the songs the score is about to end and goes into the song. I want to make certain whatever I did sounds like out of the world of his songs.

AD: Have you been surprised about the success of the song “We Don’t Talk About Bruno”?

Alvin Wee: [Laughing] Absolutely! You know we do not talk about it. It’s incredible. I’m so happy and I am really proud of the work that everyone’s done and how the world has responded and connected to the story. I am guessing that we all have an uncle. [Laughter] I’m really happy that people are connected with that song.

Alvin Wee: I hope everyone enjoyed the film. I know I worked as hard as anyone else and I’m glad it shows to the audience.