Best Picture, the Consensus and the Preferential Ballot

Download: Best Picture, the Consensus and the Preferential Ballot

When we’re through this season we’ll probably look back on it and think everything should have been really obvious. It doesn’t seem obvious now. Many of the categories feel wide open:

Best Actress – Nicole Kidman won the Golden Globe, Jessica Chastain won the SAG but Kristen Stewart was not nominated at the SAG. It seems like Chastain’s to lose, but Stewart also has heat. It’s hard to tell if Stewart’s heat is actual heat or Film Twitter heat but it’s heat nonetheless. BAFTA will be no help.

Best Adapted Screenplay – The Lost Daughter won the Scripter and isn’t eligible for the WGA. Neither is The Power of the Dog. That makes it a toss up (probably, who knows) between CODA and Dune. Probably CODA wins there which will give the film, at least on the surface, more momentum. But that doesn’t mean it will win the Oscar for Adapted. It might. And if it does that seems like maybe there’s a chance it takes Picture but it would extremely unusual without a DGA or Director or Editing or BAFTA nomination.

The BAFTA gives us slightly more to go on there, because they do have The Lost Daughter and the Power of the Dog in play in their Screenplay category:

These are the same nominees for the Oscar. They are hit and miss in terms of predicting what will win at the Oscars but they did pick The Father before it went on to win the Adapted Screenplay Oscar.

Best Original Screenplay – Belfast won at the Golden Globes but it is ineligible at the WGAs. But if it has any momentum at all it will have to win Screenplay. Toronto Audience winners tend to win SOMETHING at the Oscars. Both Licorice Pizza and King Richard could also win the WGA. Heck, Don’t Look Up could win it.  Here are the BAFTA nominees in that category:

They are, once again, very hit and miss here in terms of matching with the Academy so it’s really hard to say how it will influence or predict the Oscar race in this category.

Most of the categories, except perhaps Best Actor, Documentary, Animated Feature do feel wide open.

There are several things that have made this race one of the weirdest in terms of punditry. Here are a few of those things:

Despite a shrinking industry of awards movies, the awards watching industry seems to get bigger every year. Trust me, I know. I was here when it was just me and Tom O’Neil (Gold Derby), and not too much later, the rest of the sites that would then challenge the publishing industry to follow suit, which they did – Oscar Igloo/Awards Circuit, And the Winner Is, In Contention, The Film Experience, etc. For decades no print publication other than the trade papers covered the Oscars, but by 1999 scores of news sites began to handicap the race. Even though I have seen many Oscar sites (and pundits) come and go over the past 22 years, there is a whole new generation of them coming in now. They’re dominant on YouTube (Oscar bros) and on Twitter (Next Best Picture and AwardsWatch) – and they’re all still dominant in the Penske empire: Variety, Hollywood Reporter, Deadline, Gold Derby, and Indiewire. Oscar coverage all of the time with dozens, maybe hundreds of Oscar bloggers at every festival, covering the race from start to finish – half predicting, half advocating, with strategists and publicists trying to herd cats.

This means that there is a lot of chatter. Too much chatter. Chatter is everywhere all of the time coming from every site. The truth is that none of us knows how this is going to turn out. We have our best guesses based on whatever metric we’re using. But it’s folly to try to game the preferential ballot based on your idea of what will do well and what won’t. The best way to figure out how films are coming in, and even this can change over time, is to run a poll, as we’re doing and will continue to do heading into the Oscars. Basically, what Marshall Flores and I have discovered is that you really need to come in at number one or number two in the first round of counting. A lot of times just coming in at number one ends it. No other films can catch up. But sometimes another film, like the second film, can defeat the number one film as the lower tier films are eliminated one by one and those ballots are redistributed. But it’s unpredictable knowing how that will turn out. I was able to predict Moonlight based on running polls. It definitely caught its stride as other nominees were knocked out of the running.

But conducting polls can be deceptive, because our participants don’t mirror the Oscar voters. (Nor would they want to!) In 2017, online polls kept putting Call Me By Your Name at the top because it was popular online. I am going to guess that our poll will have many votes for Drive My Car at number one. That isn’t going to really give you a sense of what the 9,000 Academy members will vote for but you can start to see how people are ranking their choices.

The good thing about the poll we’re running now is that people can vote anonymously so nobody needs to “virtue signal” to their friends on Facebook or in the comments section.

It’s worth taking a quick look at the current breakdown of the Academy too. This comes from The Wrap as of this year: 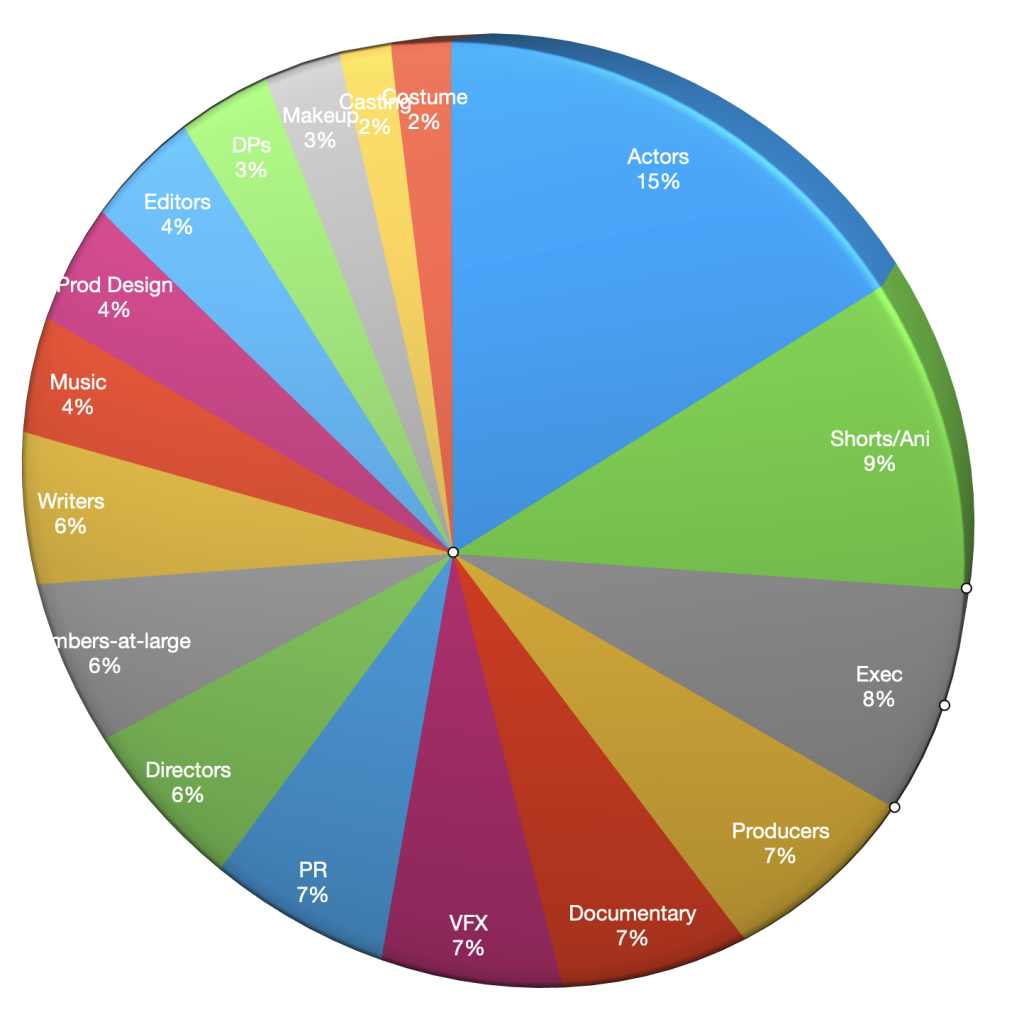 Actors, obviously, comprise the largest chunk, 15%.  But the actors alone can’t really drive a winner. They might be able to decide the winner in a close race, which is why the SAG ensemble award can sometimes signal the Oscar outcome. The Short Films/Animation branch is the second highest, though.

Other factors that are tangling up this year include:

Predicting a consensus depends on the basics being consistent from year to year: roughly the same schedule, roughly the same roll-out for movies. If anything changes it can shift the entire race. The best example of this was in 2012 when the Directors Guild announced their winners after Oscar ballots were turned in. That blew up the directing race, and it was the year Ben Affleck and Kathryn Bigelow were both left out of the Oscar Best Director category. But weirder than that, only Steven Spielberg for Lincoln and Ang Lee for Life of Pi made it from the DGA’s list. Just 2/5.

Having the DGA, PGA and WGA all announce their nominations on the same day has surely messed with the schedule (as well as our heads), and it disrupts the natural flow of consensus building. People generally like to be part of a group, part of a shared experience. When we are part of a team it makes us feel good. When we are exiled it makes us feel bad. So the more people gather around a handful of films the better people feel joining in on that, unless something happens that makes people feel BADLY about being part of that group. That was true, or came to be true with films like La La Land, Three Billboards, and Green Book. While Green Book pulled in a win, it did so because the attacks against it were actually too severe. That caused a backlash.

The publicist’s job is to make people feel GOOD about associating with a contender. This is doubly true for actors because their image is everything. Many of them not only want to be part of a group, they also need to broadcast that image outwardly, that they are GOOD people for the films they stand behind.

My favorite example of this was Spotlight vs. The Big Short year. Many were predicting The Revenant to win. It had won the Globe and the DGA. But The Big Short won the PGA and Spotlight won the SAG. The Big Short was hit with the accusation that it was a “white guy movie” about charming but sleazy bad guys. Spotlight is also a movie with a primarily white cast but they broadcast the message that associating with that movie made you a good person too. That tipped the win in Spotlight’s favor.

Having all of the nominations drop at once meant that they were splattered all over the place, not neatly aligned. That is why the DGA and SAG ensemble are so different. But also probably why CODA and King Richard were left off the directing lists. Perhaps with more momentum built up that would not be the case.

In a sense, because of that, stats don’t matter because they can best be applied in a typical set of familiar circumstances. This year’s 3-way nominations drop was the first time that had ever happened in all the years I’ve been covering the awards.

This year, BAFTA announced their nominees after the Oscar ballots were turned in. This, along with their second year of having a jury select their acting and directing nominees, makes them a less reliable bellwether than they’ve been in the past. They’re still going to matter, though, in the categories of Picture, Screenplay, and some of the crafts in terms of influencing the Oscars, I figure.

COVID has continued to influence the race in unpredictable ways. Scant turnout in movie theaters, lack of attendance at parties. (Who wants to bother taking a PCR test? You have to be very motivated, most aren’t).  There doesn’t seem to be an actual “water cooler” for voters to chit-chat about movies, listen to crowds, and mingle with celebrities. That has thrown things off.

Whatever movie is going to challenge The Power of the Dog it will have to come in at number 2 in the first round of ballot counting. And Power will have to be divisive such that it will not gather 2 and 3s in the subsequent counts. But factoring in everything we’ve seen so far, there is enough time for the winds to shift. We just don’t yet know in which direction.

Here are the charts Marshall and I put together. Both the AFI and the Critics Choice matched the ultimate Oscar list 9/10. For the AFI the only other time they did that in the era of the expanded ballot was in 2010, another year where the Academy had an even 10. The Critics Choice also had 9 in 2010, and again in 2011. 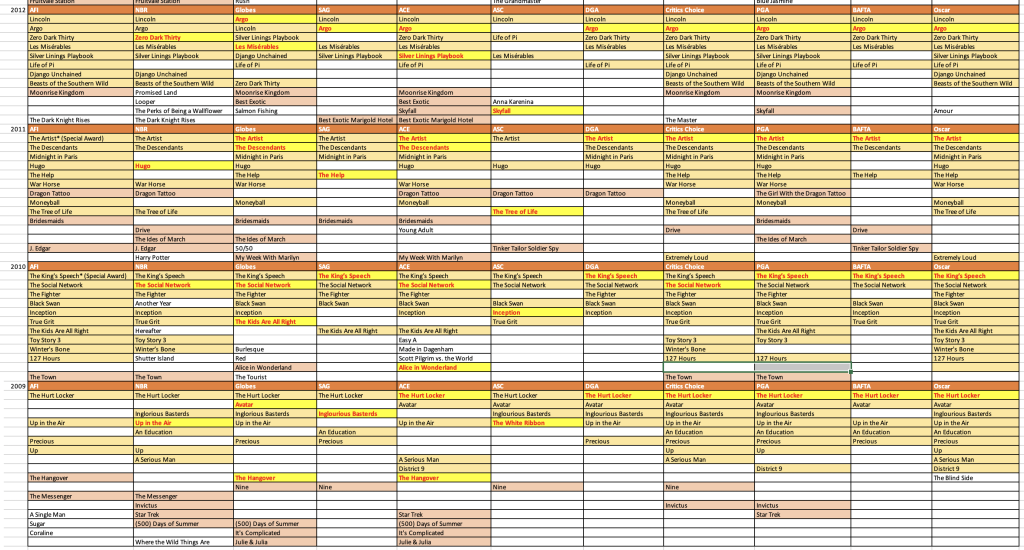 Does 'The Dropout' Merit Emmy Attention Or Does It Go To the Back of the Class?