Leave it to the very deep and bottomless pockets of the most powerful company in the world, Apple, to make the Best Picture race this year a contest between a film with three Oscar nominations and a film with twelve.

Both The Power of the Dog and CODA are directed by women, which is a powerful chess piece to play in 2022. Both were seen at festivals” CODA at Sundance, where Apple bought the film for 20+ million in order to drive more subscribers to AppleTV, and Netflix’s homegrown film, The Power of the Dog, which showed at Telluride and Toronto. Last year the race was also down to two women: Nomadland vs. Promising Young Woman (even if some tried to make the race about The Trial of the Chicago 7, it was never going to be a win for a man that year, or very likely this year). We’re still an industry existing in a palpable climate of fear, with almost everything we do, say, think, write, believe, like is carefully scrutinized. Thus, there is a sense that if change won’t come naturally, there must be a collective effort to force it through. This is true across all industries in Hollywood, and those that the Left wing of this country controls — which is basically all of them.

Both films are about to slice open the Oscar race to streaming platforms, and it’s a race to the finish. Big tech has now entered the room. By contrast, Netflix starts to look more like a traditional platform compared to Apple or Amazon. All of the streaming services will eventually dominate the Oscar race as we live through yet another major change in how we watch films. But with Apple in the race, there is a sense that something much different has arrived in our small town.

If you think Netflix is a powerful company and a big spender, wait until you get a load of Apple. Apple isn’t a planet in the solar system — it is the solar system. They’re a massive company that reaches you in a variety of ways: your phone, your computer, your email, your music, maybe your watch (certainly my watch). That they’re now potentially trying to birth an upset in the Oscar race is quite something for us old-timers. If you told my 1999 self (she with the 24.4K baud modem dutifully working out complex HTML code to create the website Oscarwatch on what was the World Wide Web) that one day Apple computers would not only change the game with cell phones — to put a computer in the palm of your hand — but would have a film in the Oscar race, I would have thought you were insane. But here we are.

You do have to wonder, what is Apple’s game in this? I know they are trying to grow their AppleTV platform with film and television, but is that really worth $20 million? What can’t they do? What can’t they buy? Not just CODA for $20 million, but advertising too. At least Apple isn’t in the social media business, or the social media business isn’t in the Oscar race. Yet. What might it look like in ten years? Facebook, TikTok, and Twitter squaring off for the big prize? Would that make the Oscars bigger than they are right now? Maybe it would. Maybe it wouldn’t. Maybe it’s the end. Maybe it’s just the beginning.

We can feel the Metaverse headed our way with transhumanism and AI. Maybe AI will eventually overtake the Oscar race and what wins Best Picture is exactly what the system has decided you, the voter and citizen, will like best based on the data collected from your viewing and scrolling habits. Just as they can monitor your health and target you for ideal products, maybe the Oscars one day will be taken out of the hands of voters and reworked for maximum appeal and moral instruction. The future is open wide, baby.

What’s remarkable about CODA is how it’s managed to give the impression of being a “little movie that could,” when in fact, it’s anything but. Maybe the movie wasn’t thought of as prestigious enough early on, to earn the requisite nominations to become a formidable contender — or it might simply be that not enough voters had seen it during the nominations phase, but now that more people have had time to watch it they appreciate its charms. So instead, we have a last minute switch because people are bored sitting around for months. After all, it’s already March — the Oscars are usually over by now.

Sometimes, a kind of general malaise sets in and the frontrunner is the film that needs to be toppled. That has always been true, from when there were five nominees for Best Picture and through the era of the expanded ballot. There is always a race between the frontrunner and the underdog, as such. That was true in 2019, when 1917 somehow became a film people didn’t want to vote for because they felt somehow obligated. Parasite surged because by the end voters wanted to vote for it. Part of their wanting to vote for it had to do with the era we’re living through now, which was already evident in 2019 but has only intensified ever since; imagine, we’re actually living through a time where voters are hesitant to support or vote for any males, but probably specifically white males.

Yes, Parasite’s win was in large part about the movie itself, which is undeniably great. But it was also the atmosphere, this climate of fear we’re living through where one mistake can end a career. What’s happening in this town right now, who these people are, what message they want to send, what kind of headlines they want — all of these things came into play and it was easy to pull the switch for the film that got a standing ovation at the SAG Awards. Then they could do what they didn’t do the previous year, vote for the first foreign language feature to win the biggest prize of them all. Parasite won and the Academy never looked better. How to top that this year?

The advantage, for instance, that The Power of the Dog has — written, directed, and produced by Jane Campion — is directly challenged by CODA, which is also written and directed by a woman, Sian Heder. Additionally, if voters are inclined to do good things with their vote, they would see that CODA, aside from being a very moving film overall (especially the ending) features a predominently deaf cast. They’re all really good in the film. That’s never been seen before. It seems like the perfect follow-up to Parasite’s history-making win a couple of years ago. Right? Right?

But the problem for CODA, however, remains those three Oscar nominations: Best Picture, Adapted Screenplay, Supporting Actor. That’s it. Why not, say, Supporting Actress? Why not editing? Why not Best Actress?

From a stats perspective, you literally have to go all the way back to Grand Hotel (“ye olde Grand Hotel stat”) to find a year where a film with so few nominations won Best Picture. It’s a nagging question as to why it was so weak coming in and why all of a sudden it seems like a direct challenger to The Power of the Dog.

And the answer to that is, quite simply, Belfast got out of the way. Belfast was going to be the main challenger to The Power of the Dog. Belfast won the People’s Choice Award in Toronto and was headed into the race a strong contender. But there was a general mood of discontent, at least as far as I could tell, that ultimately pushed Power of the Dog ahead — I think it probably has something to do with what I’ve been yammering about, identity and all of that. But maybe people wanted a film that felt more “important” than Belfast did. Maybe it was deeper, who knows. But the feelgood movie that took Belfast’s place appears to be CODA.

You might be wondering how a movie with just three nominations is suddenly everywhere all the time. It isn’t just about Belfast. It’s also about Apple. In addition to having deep pockets, Apple also has extraordinary access to probably every single Oscar/industry voter or critic. They have user habits. They have data. They can get their ads or their articles or their reviews targeted in ways other companies can’t. It’s kind of funny, when you think about it, that they’re even running FYC ads at all. Given that they are an entire universe, they could push CODA without ever even taking out a single ad.

But CODA isn’t Argo. It isn’t Shakespeare in Love. It isn’t even Crash. All of these films had strong branch support. All of them had a DGA nomination at the very least. Their presence in the race was not second guessing because the frontrunners faltered. It was simply a matter of figuring out what WOULD make the frontrunners falter and then taking your best shot to drive through an underdog upset.

Belfast is more of a traditional Oscar movie: it’s the only film that has all three guild nominations — DGA, SAG, and PGA. CODA has two out of three, so does Power of the Dog. King Richard is a film that has no Best Director nomination, but at least it has editing and even WON editing at the ACE Eddie Awards.

Indeed, from a stats perspective, only one movie CAN win, and that’s The Power of the Dog.

So why are any of us talking about CODA? Well, because if it does win, that completely changes the game in almost every way I can think of. It doesn’t just eliminate the need for broad support, it also flips the Academy game away from theatrical and towards streaming/subscription. All this time the moral panic has been about Netflix. It would be ironic if Apple came in and knocked the door down. With a big tech company like Apple driving a Best Picture contender, however, I would imagine the Academy would have to rethink the rules a bit. They have an unfair and outsized advantage in their reach and power.

I personally don’t think anything Jane Campion said at an awards show changes the dynamics in play for this race. What I think hurts it more, at least from my perspective as a stat person, is having no SAG Ensemble nomination. While films have won without it, especially since SAG joined up with AFTRA, it is still a good thing to have in a competitive race (though maybe this isn’t a competitive race).

The key thing to know is this: the preferential ballot by its nature divides and fractures the consensus. Gone are the days were a Best Picture winner can sweep with 8+ wins. It isn’t even so much about the process of voting as it is the votes forming around more movies, not less. The days of five Best Picture nominees were much more cohesive, as you will see below. But the film that wins still has to come in close to the frontrunner to have a shot at overtaking it. The only difference between the old way and the new way is that you can’t really split the vote with the ranked choice ballot. That means you could never have a Chariots of Fire type situation, or even a Crash type of situation. That is why CODA is still a long shot, though not impossible. It can’t win on a plurality vote alone. It needs more support than that. It could get it. You never know. But the stats are against it. 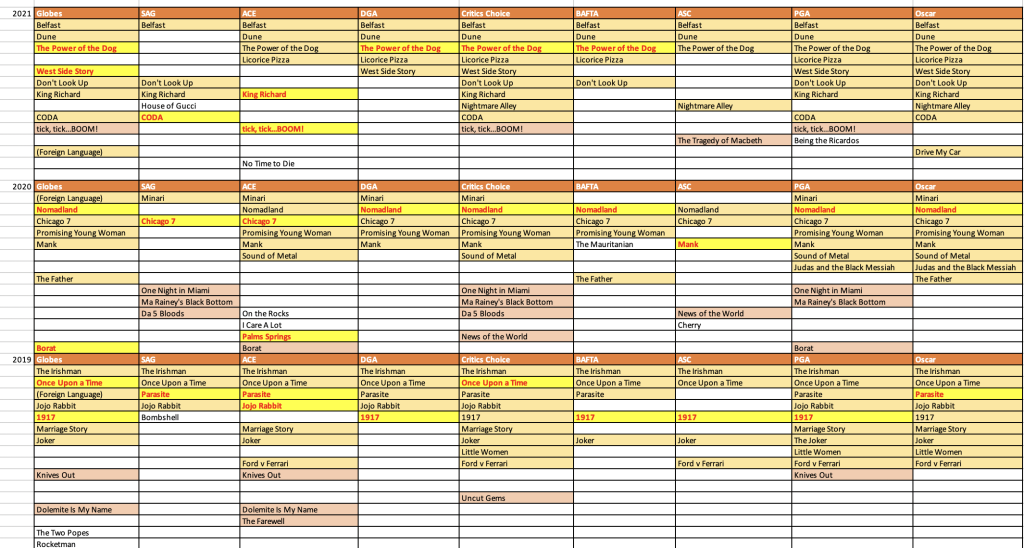 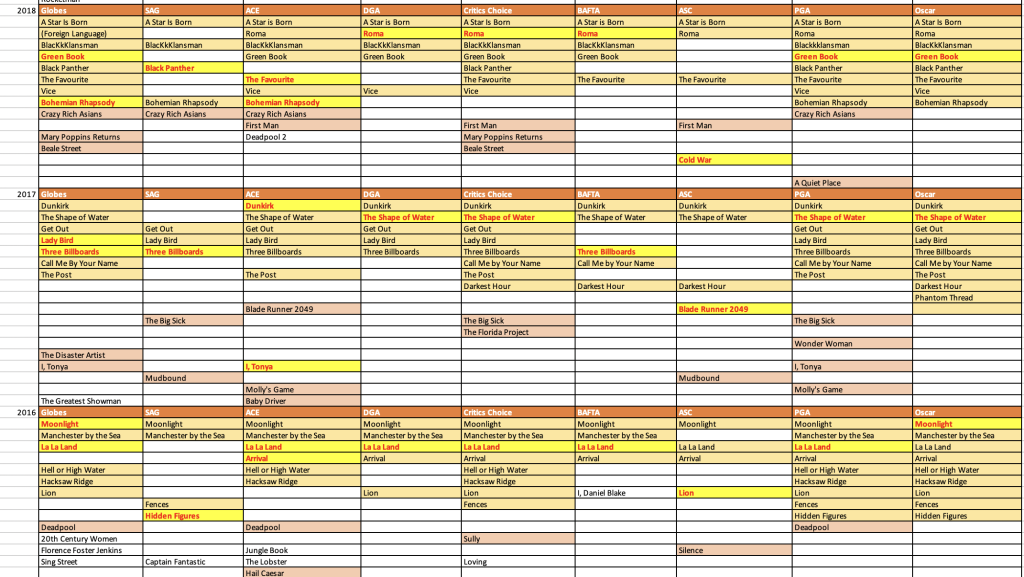 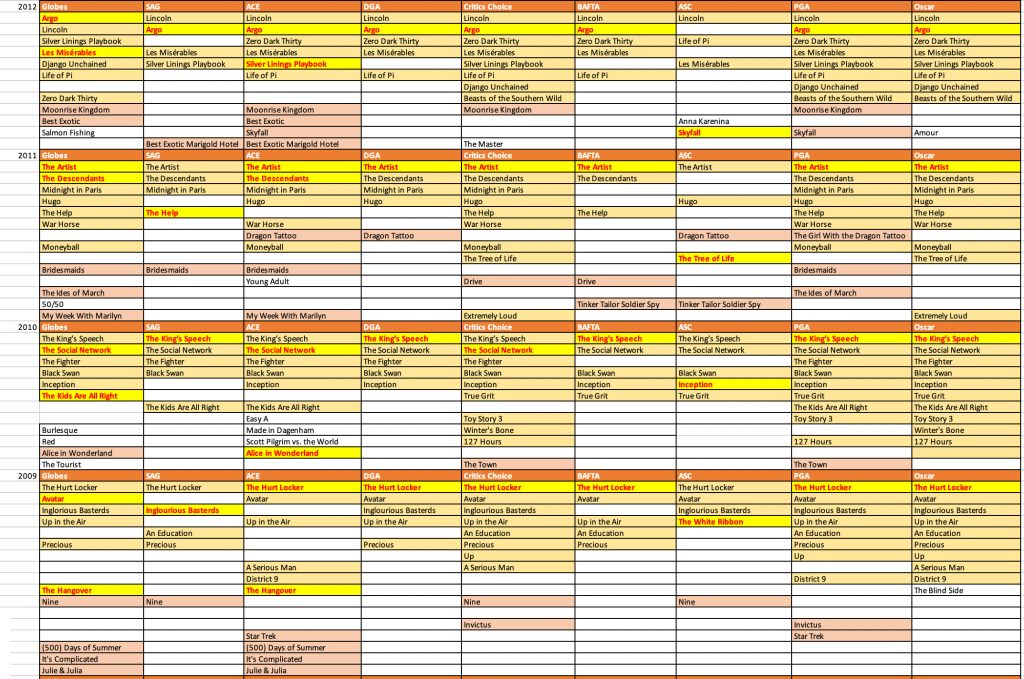