The State of the Race: It’s Time to Go Back to Five

Download: The State of the Race: It’s Time to Go Back to Five

The story of Oscars ’22 hasn’t yet been fully told. It’s been a long, strange trip. All of our months of analyzing and essay writing and interviews and debates on Twitter, through scandals and critics awards, through the nightmare of COVID — all of these twists and turns have brought us to the end. We don’t know if we’re about to live through the actual end of the Oscars themselves, or whether the Oscars will land on their feet.

CODA’s win would be, I think, a rebuke of the massive awards machine that has multiplied and proliferated over the past decade or so. As you can see, with a later date voters have more time to watch the movies, ruminate on them, explore new realms of consensus. This consensus has nothing to do with us, the awards machine. It had to do with voters who came together in a room and voted for CODA at the SAG Awards, like they did Parasite and Spotlight.

I used to think, when I started, that I could game that system. Once I understood, finally, why How Green Was My Valley beat Citizen Kane, I then set about trying to urge the Academy to vote like the critics. That is, to come at it from an intellectual, not an emotional, standpoint. But now I know, 22 years later, that the only value awards have isn’t so that they can look good looking back, but rather, as a communal event in the current moment that drives both love of movies themselves and awards voting.

The only way you can get to that, however, is to allow the Oscars to enjoy only having five nominees as the SAG has for Best Ensemble. The BAFTA, the Globes, the DGA — they all work with five. The Oscars should also work with five to bring back the thing about them people love the most: that surge of enthusiasm for one winner. That winner might even sweep, and then we’ll have our grand ceremony, our communal experience — the thing the Oscars are invented for.

The Academy Awards are a living, breathing thing. They are a time capsule. They tell us who we were at a given point in time. You can’t correct the past and you can’t erase the past. But if your awards only reflect a small segment of the community then they lose what their value was to begin with.

We don’t need them to be sophisticated, particularly, but we do need them to be fun and popular again. The way to do that, I think, is to drop the idea that they can satisfy everyone’s needs. They are trying to cater to a very small subset of the population when they do that. They have to (and most people have to) try to endure the public humiliation that will come with this change and every other. They have to learn to live with Twitter, to survive Twitter, as we all do.

Going back to five is a solution for the Academy if they want to keep themselves popular in the broader sense. If they don’t, if they want to retire to streaming where they can live out their days like their oddly revisionist museum — they will be good citizens who regret their entire history. But they shouldn’t totally give up without a fight. Go back to five. See how it works out. If it is a disaster, go back to ten.

If Oscar can turn around last year’s cataclysmic descent, maybe claw back a few points, then it can live to fight another day.

If it confirms last year’s horrendous results as the new sea level, or even loses ground on that, then we can declare the era of Oscars as one of the world’s great mass events effectively over, and Hollywood will officially have lost its greatest advertisement for itself.

What is the problem for the Oscars right now? They are alienating more people than they are attracting. Part of this is a generational shift. The Baby Boomers dominated the Oscar scene for so long, and now that they’re on their way out we have to count on Millennials and Gen Z to fill the void. With the exception of the pockets of fandoms online, there doesn’t seem to be much of an interest in the Oscars anymore.

It seems to me that everything has become too much in the coverage of the Oscars and too little in awarding the kinds of movies that the public sees, that people “out there in the world” talk about.

There has never been a point in all of Oscar history where there was this much coverage of the Oscar race around films almost no one will not only have ever heard of but will never watch. The Penske media empire, which owns Variety, the Hollywood Reporter, Indiewire, Gold Derby, and Deadline, has become a massive force and generator of urgent content because their reporters are driven to it, pressured in bringing in the eyeballs so everything has to be dialed up to level 10 at all times.

The idea behind the 10 nominees in the first place was to address the concern that The Dark Knight failed to earn a Best Picture nomination in 2009. The uproar over that movie’s exclusion pressured the Academy (that has been, frankly, under too much pressure for two decades by me and others) to expand their ballot, something they’d left behind starting in 1944. What we got instead, though, was not a broader reach as we’d hoped. We got more of the same kinds of movies. When they neglected to nominate Spider-Man, it was a pretty good sign that the Oscar voters simply did not want to go there. They don’t want to expand. They like things as they are.

Another reason to expand the ballot was to address diversity, equity, and inclusion. But the expanded ballot hasn’t really addressed that problem nor solved it. There were fewer female nominees this year than last year in the non-acting categories (I work on the Women’s Media Center’s Oscar report every year, along with Marshall Flores, and these were the findings):

Things didn’t improve for women or for filmmakers of color, as King Richard’s director, Reinaldo Marcus Green, and CODA’s director, Sian Heder, were not included, even if they did get in for Best Picture. No Black actress was nominated in Best Actress.

With 10 nominees, the field is greatly diluted and eliminates one of the reasons people tuned into the Oscars in the first place: excitement. Add to that, we didn’t have many different studios with films in the race. They were consolidated because the business is dramatically changing.

Netflix
The Power of the Dog
Don’t Look Up

The ratings really started to dip, more or less, when they expanded the ballot. 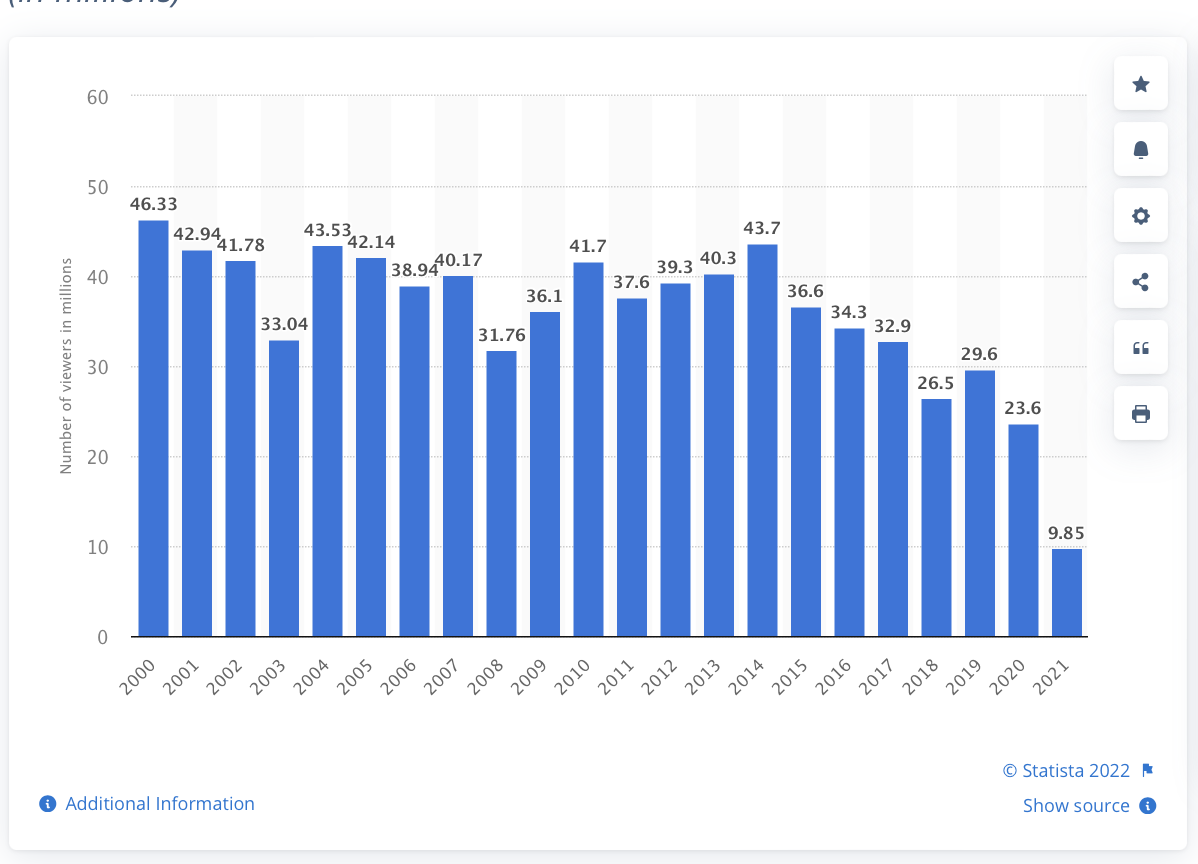 You did see good years in 2010 and 2014. They began to decline in 2014 and continued to trend downward, which coincides with the rise of activism in Oscar coverage and everywhere else. Trump’s rise kicked it to a whole new level where the only thing that seemed to matter was activism and politics. That has also begun to influence what kinds of films get made, what those films are about, and without the free market to tell studios what voters actually like, and an Academy that doesn’t care anyway, what is the whole point of having 10 now?

If there were still big studio movies the Oscar voters liked, if there were an abundance of them, then maybe 10 movies would make sense because they’d all be popular, or most of them would be. But that isn’t how it’s going. In fact, where we’re headed is into streaming and subscription services, not box office. Still, having five will lighten the load across the board so we can have movies that sweep again, which they are unable to do in the current system.

Granted, Film Twitter and many people who read this site and contribute to it like the 10. They especially like the kinds of movies that get chosen. They are chosen by the tastemakers, that’s why. They aren’t chosen by the people, so why would the people care that much? The Oscars can’t survive just by catering to the desires of all of us. They have to be bigger than that, as they always were.

They can find a way to have another category, perhaps, like the DGA has with “First Time Director,” which might help solve some of their needs. If they add more categories they can keep off the telecast that might encourage a broader reach then maybe they should do that. But for now, to save this race, let’s go back to five.

Let the Oscars be the Oscars. Let them have sweeps again. Let Best Picture and Best Director match again.

I think it was a mistake to try to make the Oscars into the National Society of Film Critics. We don’t need the Oscars to be that. We need them to be what they were during their half-century heyday. I think many of us in the industry should take a good long look at CODA’s impending win, and see it as a humbling experience as much as anything else. We tried to control the race. Other forces in the race fought back. The reason is that the consensus was formed because a lot of people in a room came together in support of one movie.

I am not sure this will work, by the way. The Oscars were becoming more and more insular even before they expanded the race. The great divide was already starting to happen between superhero movies and adult dramas. But with the explosion of high-quality TV and streaming, what will define movies going forward?

Perhaps they can simply have two separate categories for Best Picture? Could they have a blockbuster category? Could they implement a jury that curates their choices?

Maybe the ratings will rise. Maybe their problems will be solved. But if they aren’t, and they have to continue their contract with ABC, they should go back to five. I have never liked the preferential ballot to find a winner. It doesn’t give people the sense that they have united behind one movie to rule them all.

That’s how I see it anyway. How about you, Oscarwatchers?