Good As Gold: A First Look at the Acting Contenders

by Mark Johnson
in featured, Good As Gold
167

Download: Good As Gold: A First Look at the Acting Contenders

In case you missed it, I previewed the early contenders for Best Picture earlier this week. That process – and the conversations that came after – got me excited about some of the actors and performances that could end up gaining Oscar buzz later this year.

The first thing that stands out is the number of actors nominated for playing real-life people. By my count, it is just under half of the field. Another interesting thing to note is that fourteen actors received Oscars for roles in a biopic. Playing a real-life figure that people can draw comparisons to goes a long way towards gaining traction with the Academy.

You know what also helps? Starring in a film that is up for Best Picture. This is likely due to members prioritizing those screeners ahead of some of the other films on their list. In that same ten-year period, 126 of the 200 nominated performances starred in a Best Picture nominated film – and that, aside from this most recent event, was in the era of the sliding range of 5-9 Best Picture nominees. Now that the Academy has decided to move forward with a static ten nominees for Picture, those odds will only increase. In that span of time, 2015 was the only year where less than half of the acting nominees starred in films up for the big prize. As for the 40 winners, only seven did not star in Best Picture nominated movies, and they were all in the Actress and Supporting Actress races (Cate Blanchett – Blue Jasmine; Julianne Moore – Still Alice; Alicia Vikander – The Danish Girl; Allison Janney – I, Tonya; Regina King – If Beale Street Could Talk; Renée Zellweger – Judy; and Jessica Chastain – The Eyes of Tammy Faye).

Before I begin with my acting predictions, here are the films I opened my Best Picture prognostications with:

Category placement is something that is nearly impossible to predict at this stage, where plotlines and roles are in large part kept under wraps. There is also a strong chance that some of these films end up pushed to 2023. I feel Oppenheimer, Maestro, Napoleon, and Emancipation will be pushed, so just like in Picture, you won’t find those performances in my predictions.

Five more on my radar – Hugh Jackman (The Son); Timothée Chalamet (Bones and All); Idris Elba (Three Thousand Years of Longing); Jesse Plemons (Killers of the Flower Moon); and Michael Fassbender (The Killer) 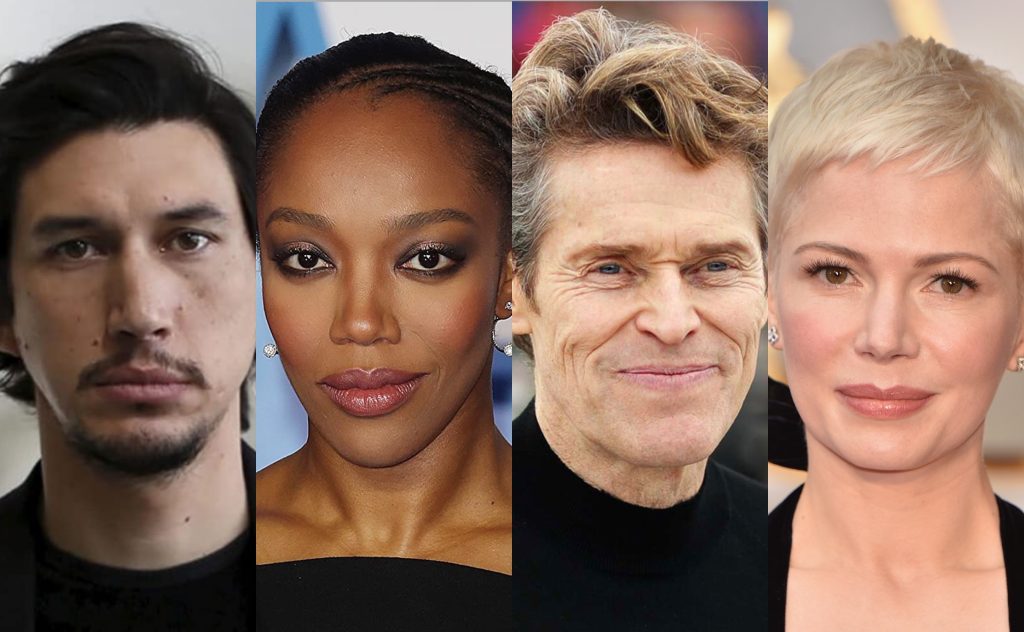 Three of my four front-runners star in movies I am predicting to be nominated for Picture. That stays in line with the 83% rate we have seen the past ten years. At least nine of my twenty predicted nominees play real-life people, staying true to the nearly 50% clip over that time. Coincidentally and without intent, five of my actors predicted are people of color, which is about one more than we have averaged in the last ten years (3.9 per year).

With Dafoe and Williams, I might be thinking more with my heart than anything else. Both actors are well overdue (think Will Smith or Laura Dern, in recent years). Driver seems to be the man of the moment, a la Jessica Chastain this past year. And then, as we all know, Oscar loves a young, pretty newcomer (think Ariana DeBose, Brie Larson, or Lupita Nyong’o), so Ackie becomes my no guts, no glory pick. And if she does her own singing in the film (she plays Whitney Houston), then watch out! Oscar loves a girl who can sing (Jennifer Hudson, Emma Stone, DeBose for example).

What are your early predictions for the Oscar nominees/winners in the Acting categories?
You can find my updated predictions for Picture and the four Acting lists, here.