Download: Barack Obama Takes Us To The “Wild Places” in Netflix’s Our ‘Great National Parks’

I suppose it goes without saying that you will see some of the most extraordinary images you’ve ever encountered by watching Netflix’s five-part docuseries Our Great National Parks. I for one will never forget the lemurs leaping from what look like razor sharp giant stalagmites, from one to the next, to reach a lush green clearing that would provide life-saving food—if they can only complete each perilous bound over a topography straight out of a scene from Game of Thrones.

There are times during this eye-popping exploration of nature (and the leaping lemurs was just one of them) that you would swear you were watching an animated film. You aren’t, though. Everything shown is breathtakingly real. 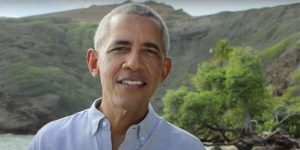 Former President Barack Obama serves as guide and narrator, and like with most things he turns his attention to it turns out he’s a natural. His calming, mellifluous, and oh so particular voice is a perfect fit for the mesmerizing sights on display. My wife said it best as she listened to the former president’s opening monologue, which takes place on a beach he grew up on in Hawaii: “When Morgan Freeman dies, you know who they are coming for.”

After American Factory, Crip Camp, and Becoming, Our Great National Parks arrives as the fourth documentary produced by Barack and Michelle Obama’s Higher Ground entertainment company for Netflix. The previous three were feted with rapturous reviews and Oscar and Emmy nominations, and it’s hard to imagine how Our Great National Parks won’t follow suit. Those who have previously salivated over nature series like Planet Earth or Blue Planet will need multiple drool cups for this one.

Whether it’s glimpsing rare footage of a Sumatran tiger, an extraordinary tracking shot of a sea otter trying to find a safe place to store her newborn under a floating dock, or a vividly colored flatworm devouring a slug… well, there aren’t enough adjectives to describe all the beautiful and sometimes deeply weird splendor on display.

As one might guess, the “wild places” Barack Obama takes us to aren’t just shown as just a feast for the eyes, but to educate us as well. While this is hardly a hectoring series about the value of these parks (many of them located outside of the US), the show makes it clear what we stand to gain by preserving them, and what we will lose if we don’t. Namely, oxygen and up to a quarter of all future medicines.

Our Great National Parks is a largely optimistic view mixed with words of caution about our collective (humans and wildlife) future and how everything on Earth is connected. Whatever selling is going on is done with a light touch. Only at the very end does Obama close by saying that one of the most important things we can do for our environment is to vote for those who would protect it. After five episodes of evidence-based information backed by transfixing visuals, it shouldn’t be a hard argument to accept.

Personally, I wish I had as optimistic an outlook as the former president. Obama refers to these national parks as one of our greatest accomplishments. While I’m not saying he’s wrong, for me it seems like a sad reality that one of our greatest accomplishments as a species can largely be described as managing to leave these most beautiful remaining places on earth the fuck alone. 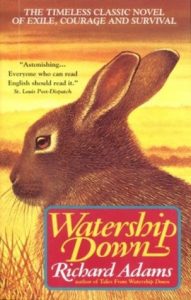 In Richard Adams’ masterpiece of a novel Watership Down, a rabbit named Captain Holly states, “Men will never rest till they’ve spoiled the earth and destroyed the animals.” While Our Great National Parks chooses to put most of its emphasis on what we have and how we can keep it safe, the pessimist in me is struggling with what we’ve already done, where we are going, and the likelihood of a dire outcome for humankind. Will the Earth, as George Carlin once said, shake us off like a bad case of fleas?

Maybe the question we should all be asking ourselves is, if we aren’t willing to save these last wild spaces, are we the ones who aren’t worth saving? Because it’s difficult to see the beauty of these untouched places while thinking of all the carbon and black pollution we put into the air, and all the garbage we put into the water, and not entertain the thought that the world might just be better off without us.

Of all the things this series could have brought to my mind, I didn’t expect one of them to be the end of David Fincher’s great serial killer thriller Se7en. As the film closes, Morgan Freeman as Detective William Somerset can be heard in voiceover saying, “Ernest Hemingway once wrote, “The world is a fine place and worth fighting for.”

And then with the slightest of pauses he adds, “I agree with the second part.”