by Maria Jacqueline Hauser
in Reframe
1

“How many children had Lady Macbeth?” is a notorious phrase among literary critics. While some have considered the question seriously, others have understood it as a tongue-in-cheek example of the types of irrelevant rabbit holes Shakespeare scholars can sometimes disappear down.

This very question, however, has been considered seriously—and to great effect—by director Justin Kurzel as the central theme and through line for his 2015 film adaptation of Macbeth. The horrific beauty of its cinematography, the originality of Kurzel’s vision, and Michael Fassbender’s performance in the title role makes Kurzel’s film the most accomplished and authentic Macbeth film to date.

“How many children had Lady Macbeth?” does in fact have a straightforward answer, and that is: at least one. Shakespeare’s text tells us that Lady Macbeth has had and nursed at least one child: “I have given suck, and know how tender ‘tis to love the babe that milks me.” At the start of the play, however, we meet a childless Macbeth couple, raising the obvious question of what has happened to this child (or children). It is upon this blank in the story that Kurzel seizes, opening his film with the striking image of a dead child atop a funeral pyre. Draped and hooded in black, the Macbeths approach to place silver coins upon the toddler’s eyes.

As Macbeth sets the funeral mound alight that will send his child to another world, standing aside and visible by the light of the fire is Banquo and his living child, Fleance—a contrast that brilliantly foreshadows the envy that will poison Macbeth’s soul against his former friend and brother in arms. This opening scene is Shakespearean filmmaking at its most thoughtful and powerful. With the full force of Jed Kurzel’s haunting original score, the camera pans over a primeval Scottish landscape. The bagpipes drone, echoing the violence of this land, as the camera drinks in a vast and terrifying emptiness that reflects the Macbeths’ lives in wake of this loss. 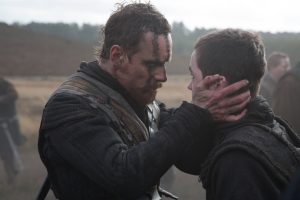 As if this opening wasn’t flooring enough, Kurzel isn’t yet finished telling us how many children the Macbeths had. The film’s initial battle sequence (where we get our first taste of this film’s particular brand of blood-stained cinematic beauty) brings another child to the mix—this time a teenaged boy. In the thick of battle Macbeth and the boy are separated, and Macbeth watches, as if in a dream, as the boy’s throat is cut. While it’s never explicitly stated, it’s clear that this young man is also a Macbeth child. This prologue is a tour de force—nary a word is spoken, but by the time we meet the witches on a barren and empty heath (where Shakespeare’s play begins) Kurzel has built up an entire context and emotional world in which we understand that the Macbeths’ lives are barren and empty, and ready to be exploited.

Historically, and perhaps understandably, people have had trouble connecting to the Macbeths as characters. I don’t think that this disconnect is due to the obvious (i.e., their horrible crimes) but rather due to a lack of satisfying human factors to help explain them. Shakespeare doesn’t offer any clear motivation for the Macbeths’ dynastic ambitions, nor as to why they are so susceptible to evil when it comes for them.

For many, simple blind ambition without preexisting comorbidities or catalysts fails to explain how a high-minded character like Macbeth, who has heretofore been described as brave, noble, loyal, and principled, could in this trice of time become a monster, a regicide, and a child killer.

Keeping in line with Shakespeare’s text, Macbeth films have traditionally allowed the couple’s motivations to remain ambiguous (if not opaque). But for those who have always craved more of a why, Justin Kurzel, with his unique vision, boldly says: Here’s your why.

Kurzel forces us to understand the Macbeths as a couple staring into their own oblivion. In this terrifying film, it is the windswept silence of their lives and the senselessness of the death of their children that spurs them on to reckless abandon, nihilism, and cold-blooded murder. Nothing matters to them anymore, and it is at this time of despair that the forces of darkness arrive to flood these empty vessels.

In a world where meaning breaks down and nothing matters, you can do anything to anybody. Because the past is unbearable, the Macbeths set their eyes on what they can achieve. Here is something they can control—or, at least, something they think they can. Kurzel’s vision is unique in its presentation of the Macbeths’ ambition as a reaction to trauma, and (perhaps even more originally) a distraction from pain and loss.

To make it unmistakably clear what the Macbeths are experiencing, Kurzel saturates his film with children. Even the witches in this production appear with children. Considering that the Macbeths of Shakespeare’s play are childless, it might seem like a stretch, or even inauthentic, to create such a deeply child-centric Macbeth. But Kurzel has only chosen to make manifest and unignorable to us what, in his interpretation, must be painfully visible everywhere to the Macbeths: King Duncan has children; Banquo has Fleance; the Macduffs have many children. Everyone seems to have children—except for them.

Despite Kurzel’s admirable, all-encompassing vision, the production does have flaws. Somewhat maddeningly, the same impulse for bold innovation that makes his version so compelling can also lead it astray. In the play, Shakespeare’s treatment of the Macduff family is brutal enough. Acting on orders from Macbeth, Macduff’s castle is surprised and his entire household is murdered (“wife, children, servants, all that could be found”). This grisly and heartbreaking fate was evidently not violent enough for Kurzel, who makes the shocking decision to instead have Lady Macduff (played by Elizebeth Debicki) and her children brought to Macbeth at Dunsinane to be burned at the stake—a level of sadism completely unfounded for the character as written by Shakespeare. Putting aside the unnecessary horror of seeing Elizebeth Debicki burned alive (the last thing anybody ever wants to see), there’s plenty of dialogue in the film that references how Lady Macduff and her family meet their end in the play. Since this particular deviation of Kurzel’s fights Shakespeare’s text, it creates a rather jarring and discordant experience (instead of the augmented experience of the text provided by some of Kurzel’s other experiments).

Another choice of Kurzel’s that didn’t quite land was his treatment of Lady Macbeth’s sleepwalking scene, in which she is traditionally seen washing imaginary blood from her hands. Lady Macbeth’s speech remains largely unedited in Kurzel’s version—the famous lines, “Out damned spot,” “Yet here’s a spot,” and “Will these hands ne’er be clean” are all here—but Cotillard does not wash, touch, or even acknowledge that she has hands. Instead, Kurzel has Cotillard do something that no Lady Macbeth has done before: nothing. While it’s an interesting idea—and is not entirely ineffective—the scene’s pathos depends wholly on Cotillard’s expressive face, her tears, and on the beautifully cinematic apparition of another child (this time covered with the deep blemishes indicative of smallpox). Cotillard gets no help from Shakespeare’s text, here, because the director entirely ignores it. 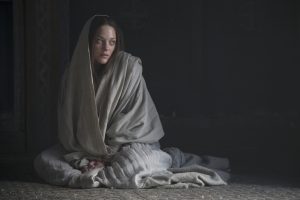 The choice to have Cotillard perform the monologue sitting down and sitting still also did not help her access the dynamics naturally present in the speech, in which her character vacillates between the powerful and unafraid Lady Macbeth we know (“what cares who knows it when none can call our power to account?”) and a new, broken and regretful Lady Macbeth (“the Thane of Fife had a wife; where is she now?” Those sentiments couldn’t be more different, and the choice to deliver this speech in the same tone throughout fell flat.

One shortcoming of the movie that had nothing to do with going off script was its underutilization of Paddy Considine (an incredibly well-cast and effective Banquo). The brief moments of camaraderie between Macbeth and Banquo and their subtle closeness, while beautifully played, were perhaps too subtle for the audience to feel the importance of the relationship in so few scenes. (In contrast, Roman Polanski’s Macbeth prioritized showing the relationship between the two men, giving ample time for us to come to love Banquo.) By not giving us more time with Considine, Kurzel passed up an opportunity to seriously ratchet up the drama of two major scenes: first, that of Banquo’s murder, and second, the scene in which Banquo returns as a ghost. Both scenes were still effective, but for us to feel as fully as possible the gravity of what Macbeth has done, we needed more of Considine, who was every inch a Banquo in every one of his scenes.

Ultimately though, the success of any production of Macbeth always rests on one thing: its Macbeth. And that is one aspect of this film that is beyond criticism. For a definitive example of the utter dissolution of an actor into his character, look no further than the scene in the palace hall, in which Macbeth reveals that he will have Banquo killed. While Macbeth speaks, he holds the point of a dagger to his wife’s stomach (or more accurately, her womb). This action reveals a deep and impressive understanding of the character and suggests a long brooding by Kurzel and Fassbender upon the witches’ prophecy from Macbeth’s point of view.

The witches foretell that Banquo, not Macbeth, will father a line of Scottish kings. In a stroke of genius, it is Macbeth’s dagger that so deftly reveals the thought that his tortured mind has been turning over and over from every angle: how, exactly, might that outcome come to pass? Sure enough, one way for the witches’ prophecy to come true would be for his queen to have Banquo’s child. When Fassbender says “Full of scorpions is my mind,” do we ever believe him—you can almost see the scorpions writhing just beneath his skin. Fassbender’s progressive arc of sleep deprivation to madness is utterly convincing. He is being eaten alive by pain, suspicion, jealousy, regret. And when it comes, the single tear that rolls down his cheek is well earned, and it is devastating.

Every Macbeth film has deficits. Polanski’s lead (Peter Finch) was simply not charismatic enough for the role, and was mostly carried by Polanski’s direction and production. Joel Coen’s The Tragedy of Macbeth was extraordinarily cinematic and original in its deconstructed starkness and sumptuous black and white, but Denzel Washington didn’t find himself entirely as Macbeth until the second half of the film.

Fassbender, though, is Macbeth from first to last, and Kurzel’s direction swings for the fences. Despite its flaws, together they have made the most memorable and cohesive Macbeth for the screen: for originality, for cinematography, and for making us see new things in a text so scoured for meaning that it can be hard to dredge up anything new. It is Kurzel’s movie that manages to take a legitimate theme and build a highly original production around it, showing us Macbeth through the lens of a couple propelled by cataclysmic loss to search for the promised permanence of dynasty in a world where their legacy has been wiped out.

Even people who have read the play thirty times, or taught it for thirty years, will learn something new about this bottomless story from watching Kurzel’s film. That is not true of all Shakespeare productions. It is true of this one.

Maria is a musician, student of literature, and lover of rabbits. She received her BA in English from Harvard University Extension School and is a MA candidate at the University of Birmingham’s Shakespeare Institute. You can follow her here: https://soundcloud.com/maria_jacqueline/

Frank Langella and the Climate of Fear