You prepare for a trip to the Cannes Film Festival typically by catching up on missed masterpieces by obscure auteurs, not by re-watching Japanese zombie comedies. But the 75th edition of the world’s most prestigious (or elitist, depending on who you ask) film festival threw a curveball by having FINAL CUT, a French remake of Shin’ichirô Ueda’s 2017 smash hit ONE CUT OF THE DEAD, open the festivities. Rightfully assigned to an out-of-competition slot, the film doesn’t hit all the high notes of the original, but the DNA it inherited is so funny and full of heart that it still – for the most part – works like a charm.

I try to avoid spoilers with my plot synopses but in this case I will share some key information about how the film is constructed because one, y’all should have seen the gift that is ONE CUT OF THE DEAD and two, I think it would actually be helpful for some viewers to know what to expect beforehand or they might – like quite a few fellow journalists did at tonight’s screening – give up on this strange little thing before they even realize what they’re watching.

The film opens with a girl being cornered and bitten to death by a zombie. It looks just like any other mass-produced zombie flick with close-up’s of the heroine’s tear-stained face and the attacking corpse’s comically gruesome makeup. Only the camera then pans away to reveal the crew filming that scene, including the director who’s unhappy with the actress’s inauthentic performance. In frustration the team takes a break, during which the makeup artist tells the actress and the actor playing the zombie that the place where they’re shooting is haunted. As if on cue, the other crew members start to come back looking all violent and undead, that’s when the film turns into a zombie flick about the crew of a zombie flick being attacked by real zombies.

And this film (shot in one take from the perspective of a behind-the-scenes documentarist) is quite obviously not well made! The makeup on the supposedly real zombies is as bad as the actor’s, the tense camerawork lacks finesse and is often downright clumsy, the dialogue often doesn’t make sense and some scenes repeat themselves or drag on forever for no apparent reason. Up to its bitter, blood-splattered end, the craftsmanship on display in this attempt at meta-zombie horror feels shockingly amateurish to be witnessed on a Cannes screen. But those who don’t make it past the 40-min mark of FINAL CUT (or ONE CUT OF THE DEAD) are missing out, because that’s when the story takes another meta leap and reveals the film to actually be about how such a “bad” film that the viewer has been seeing came to be; it’s about THE MAKING of a fictional MAKING-OF film. 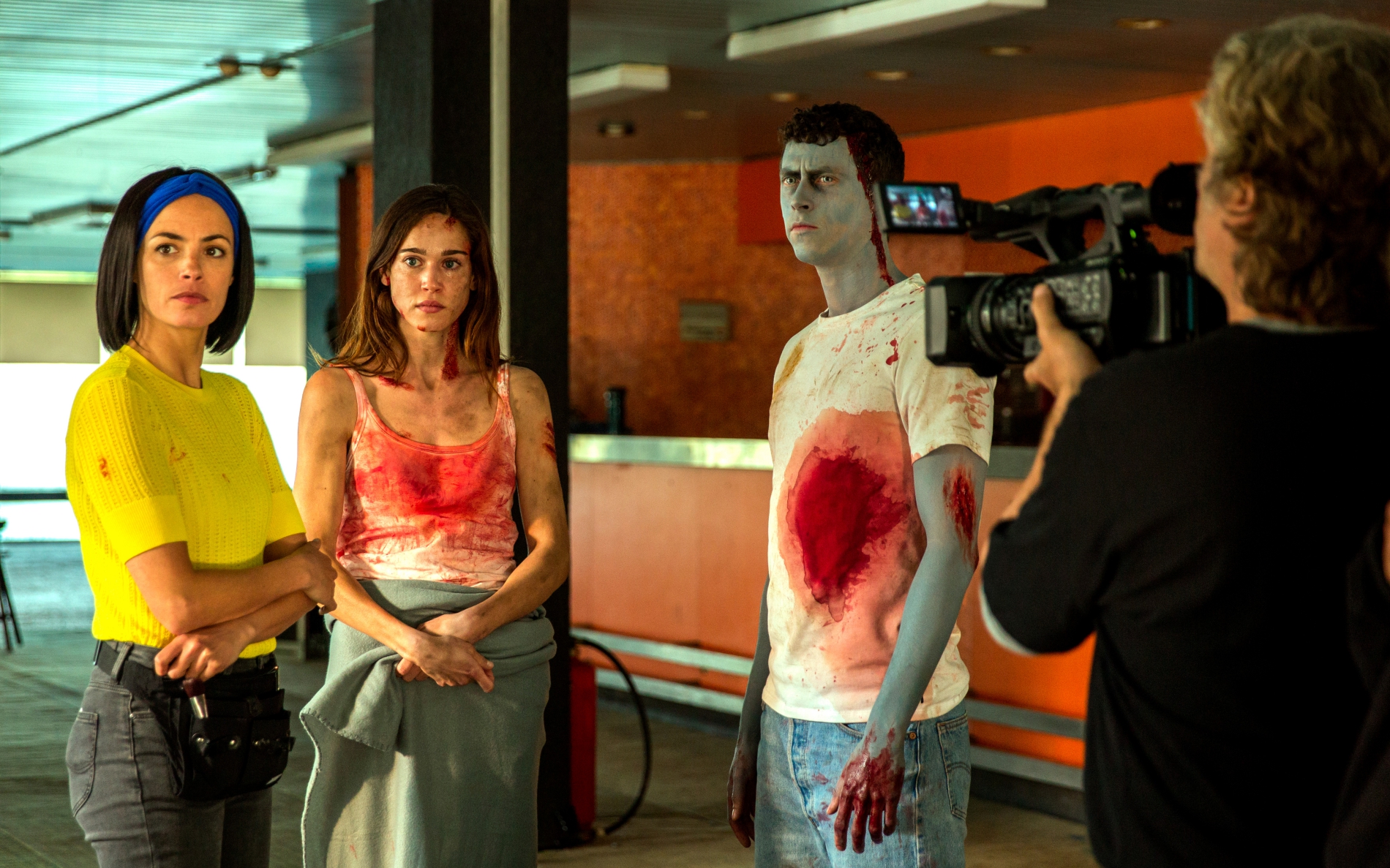 ONE CUT OF THE DEAD was the second feature of a then unknown director with no budget for stars or production value. Made with just $25,000, it looked and sounded as plainly as can be expected. But what an original, heartwarming, all-around adorable story it told – full of zombies and fake blood, no less. By presenting a 40-min, almost confoundingly bad film (in one take!) and showing the audience the ordinary causes and extraordinary solutions for each of the snafus that could have derailed the whole shoot, it’s a deceptively crude, hilariously smart comedy that broke down filmmaking to its most human parts. FINAL CUT is essentially a beat-for-beat remake, so most of the humor remains intact – when you find out why the camera is placed at a weird angle in certain scenes or why the actors ramble on about completely random things, it’s thankfully just as funny in French as in Japanese.

FINAL CUT also got Oscar-winner Alexandre Desplat to polish up the music and raised the meta game further by referencing the original film and its character names. These moves to improve on the original work for me but overall the original still scores higher, the main reason being, with Oscar winner Michel Hazanavicius (THE ARTIST) at the helm, bona fide movie stars Romain Duris and Bérénice Bejo in the cast, and a significantly more refined look, FINAL CUT lacks the rustic appeal of a go-for-broke, balls-to-the-wall indie indie. You don’t necessarily feel the same urgency or need for improvization here that so characterized the original film.

Leaving aside what the remake did and did not get right, it’s hard not to be won over by something that unveils, pokes fun at and ultimately celebrates the group effort that goes into filmmaking. For that reason alone, Cannes can’t be faulted for this unusual choice of opening film. To me this choice also leads to interesting questions of what makes for a festival film? Can low-brow be arthouse? What could/should be celebrated as art? ONE CUT OF THE DEAD grossed almost 28 million dollars – over 1,000 times its budget – in Japan, proving that a film made from nothing but goodwill and a helluva great idea can be magic too. FINAL CUT likely won’t find that level of success, but I welcome Cannes’ decision to have a rowdy horror comedy be its headliner nonetheless. There probably won’t be many of these in the coming days when the festival kicks into high gear, but I shall remain hopeful to be proved wrong.