Why Critics Should Not Review Ricky Gervais’ Supernature

by Sasha Stone
in News
63

Download: Why Critics Should Not Review Ricky Gervais’ Supernature

With a few exceptions, the reviews for Ricky Gervais’ comedy special are ridiculous. Humorless scolds working out their anger at him for violating their code of conduct, trying to pick something apart that is not meant to be picked apart. It’s a useless exercise. Now, granted, it plays well on Film Twitter, which has become an empire of scolds.  The feedback loop between media and Twitter has created its own bubble by now, completely isolated from the general population. It is, to quote Laurie Anderson, a “perfect little world that doesn’t really need you.” There are moments when it is exposed, however. The Johnny Depp/Amber Heard trial is most definitely one of those times. If you understand the jury’s verdict, you likely exist outside the bubble. If you defend Amber Heard, you are most definitely someone who lives very much inside of it.

Another example would be the reviews by critics, granted only 10 so far, of Ricky Gervais’ new comedy special. 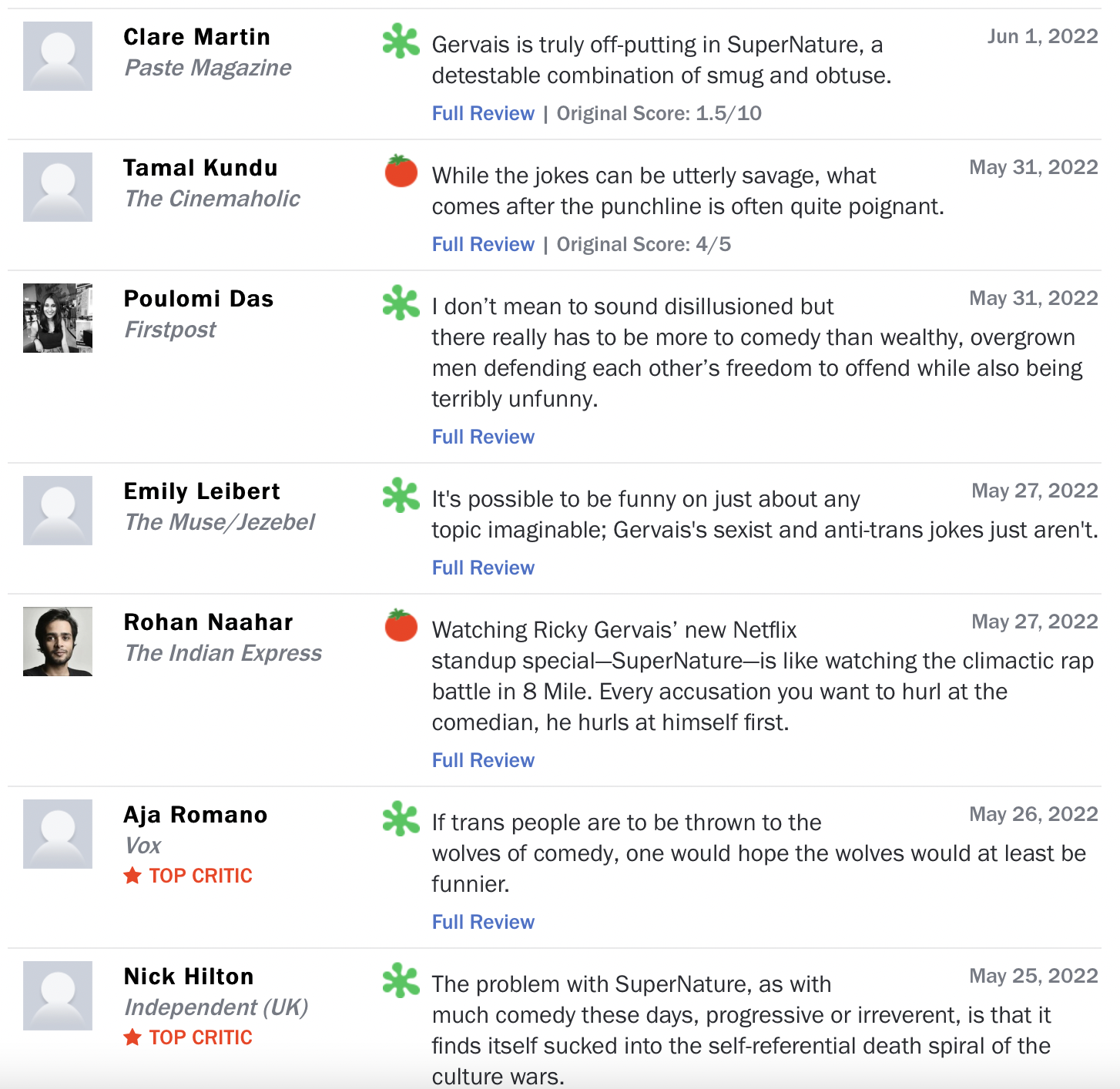 In this specific case, at least so far, these aren’t reviews. They serve no real purpose, as far as I can tell, except to reveal just how out of touch the Film Twitter bubble has become. To them, however, the many who watched and enjoyed Gervais’ special are misogynist toxic fanboys white supremacist transphobes. There is no proving otherwise.

Before I get to the special, which I will review for you here, it’s important to notice that Gervais is Generation X, like me. We grew up in a time when the Left of this country ran towards offensive things. The more offensive the better. We prided ourselves on it. Dennis Hopper in Blue Velvet, Ken Russell, bring it on. We supported and praised daring writing like Hunter S. Thompson. The new Left, however, seems to be under the control of a new generation that built an online utopia that was sprung from the loins of critical theory and Tumblr. That means they believe in policing art, speech, content, comedy, films, publishing – you name it. They’re fine with offensive people being banned from platforms because their new frontier is built by online platforms.

The future might turn out to be not Left or Right, but online platforms versus the real world outside of them. Or, in other words, George Orwell’s 1984. If you are inside the bubble you must comply with the demands of Big Brother. If you are outside of it, to them, you do not exist.

Either which way, outside the bubble it’s not a big deal to watch the Ricky Gervais special. To most people on the outside, or in the “real” world, Gervais is among the few who has the courage to mock the most untouchable subjects. Who but Ricky Gervais would have made so many jokes about Hollywood to their faces at the Golden Globes?

The answer to the new Left in achieving their desired utopia is simply, get rid of someone like Gervais and they can micromanage perception and content. But Netflix has defied the new Left with both Dave Chappelle and now, Ricky Gervais. They even sent out a memo to their employees telling them they will be standing up for free expression and if they don’t like it, there’s the door.

Amazon has mostly not complied with demands to ban books, which led their employees to do this: 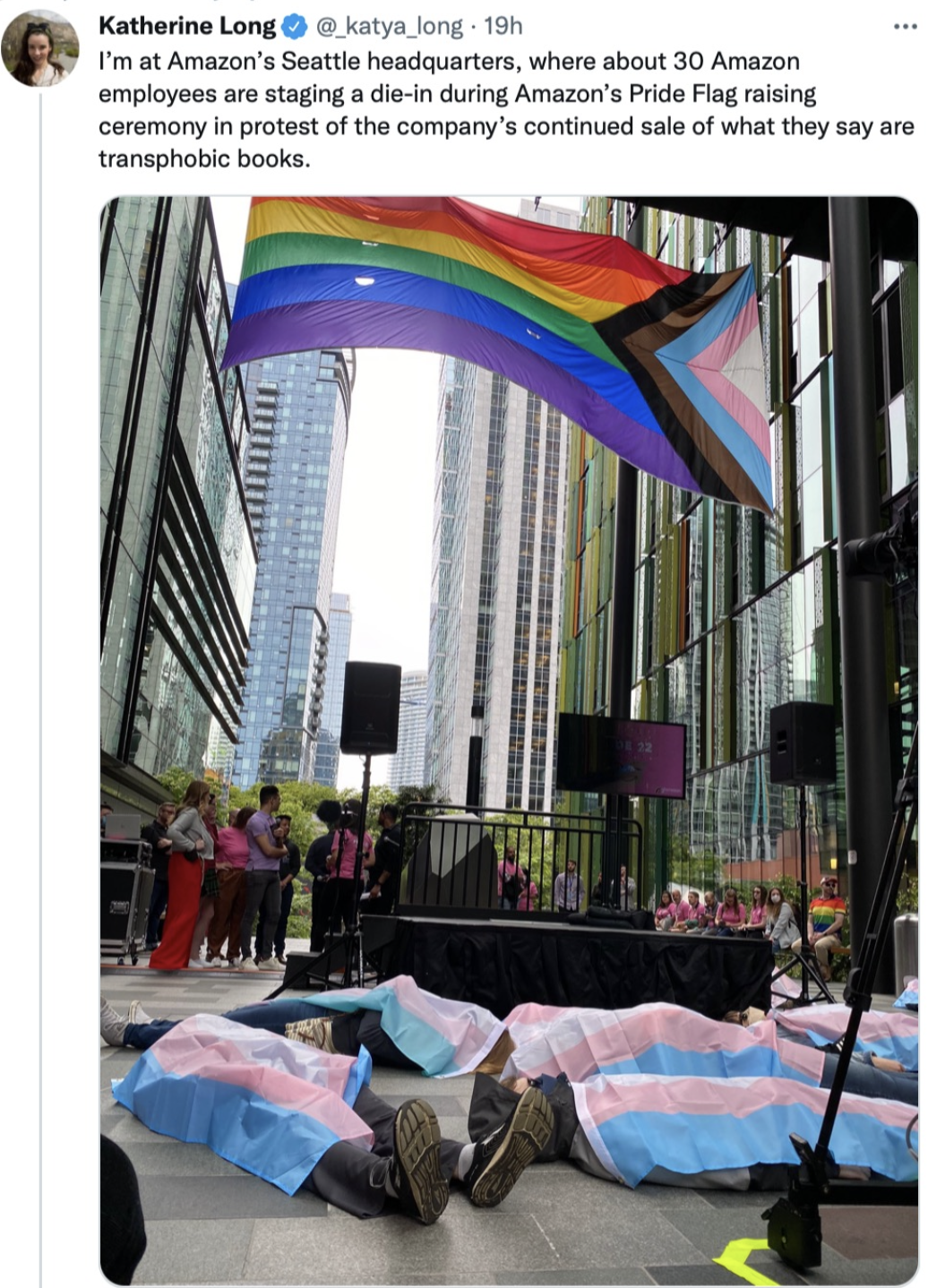 The low number of reviews for Gervais’ special means that most of the critics just didn’t want to go there.  Is that why there are so few reviews? Those who did were ready with knives out, with two exceptions. No one really wants to be caught “punching down” because they will be called out on Twitter. Remember what happened to that critic who was nearly fired at Cinemablend? That is what the new Left has become.

So, let’s talk about Ricky Gervais’ special. First off, the trans jokes are really the least of what people might consider offensive. I can think of two other bits that are probably more offensive if people are going to get offended. And, as Gervais accurately points out, it isn’t that they are offensive – it’s that you are offended. Remember, the new Left does not consider intent when dolling out punishment. They only factor in harm. If someone is offended, that makes the thing offensive, as we all learned during the past few years just in terms of the Oscars.

But just because a person is offended, doesn’t mean something IS offensive. That’s because intent DOES matter. It matters if someone is trying to be deliberately cruel. In both Chappelle and Gervais’ cases, in my opinion, they are thoughtfully exploring society’s sudden strident new code of conduct of what you must think and what you must say. They’re doing what comedians do – they’re making jokes about uncomfortable things.

Gervais’ most potentially offensive, or interpreted as such, bit, in my opinion, is the AIDS/Africa joke. I was so shocked hearing it that I couldn’t believe it was actually being aired on a major platform. The thing is, the joke isn’t really about AIDS and Africa. The joke is about God. The joke is about the idea that evangelicals would think AIDS was punishment by God and how ridiculous that was. The other potentially offensive one was about pedophiles and — little people if that’s the correct terminology. Gervais calls them dwarves. The joke is funny because it’s about the idea that the Left has become so indulgent that one day they will be sympathetic and empathetic to pedophiles.

Either of these jokes is so taboo and so verboten that no other platform would have allowed them on. Netflix is shockingly allowing it. The trans jokes aren’t really aimed at transgender people. They’re aimed at the new rules of language and pronouns. The idea that it’s worse to misgender someone, even though the language of gender seems to be fluid enough that it changes almost every day, is worse than actual crimes like rape. That’s the joke. It’s about how upset people become if you misgender. The joke is aimed at those who are not yet committed to the demands by activists that everyone complies or else.

Is it funny? Well, put it this way. I laughed so hard, in the beginning, I thought I was going to crash my car. I listened to it while driving back from my cross-country trip throughout May. What I noticed was that it had been a while since I laughed that hard and how good that felt. Laughter is so much about relieving tension. It’s about puncturing hysteria, fear, and panic. Jokes aren’t meant to be instructions on how to be better, do better, think better, live longer. They are about saying what can’t be said in a way that makes people startle to laughter.

And yes, I can’t believe I have to explain this but it seems like there is a whole generation that doesn’t understand comedy. They seem to believe they are in a position every day of deciding who is “good” and who is “bad.” They do this by judging who people are on what they say or what they read, the people they talk to, the news they watch, and yes, the jokes they laugh at. They have concluded, as far as I can tell, Chappelle and Gervais have been deemed “bad” because they have made jokes that are verboten. I don’t see either of them as “bad.” First off, I don’t put myself in that position because I’m not a religious zealot. But secondly, if they decide goodness by jokes told or what people believe, I could never go along with that.

Also, from everything I can tell both of them are “good” anyway in the ways I would define it. They both are what the Left used to be like when it was still liberal. Now, it seems like they, along with Bill Maher and Joe Rogan, are most appreciated and celebrated by the Right, not the Left. I am perplexed by a political movement that would allow the most popular to slip away like that. In alienating them, they alienate their fans. That’s just bad politics.

Is it for everyone? Well, no. It’s for people who would find these jokes funny. Or people who understand that they’re just jokes. Laughter is good for the soul.