What is a Critic? The Curious Case of No Reviews for “What is a Woman”

by Sasha Stone
in featured, News
41

When the Daily Wire launched a new documentary called “What is a Woman” they invited critics to evaluate the film. Not a single film critic took them up on their offer. Only one review is featured at a Rotten Tomatoes and that is by the Daily Wire and Hollywood in Toto’s Christian Toto.

The reception to the invitation was so extreme that Matt Walsh published the responses on his Instagram: 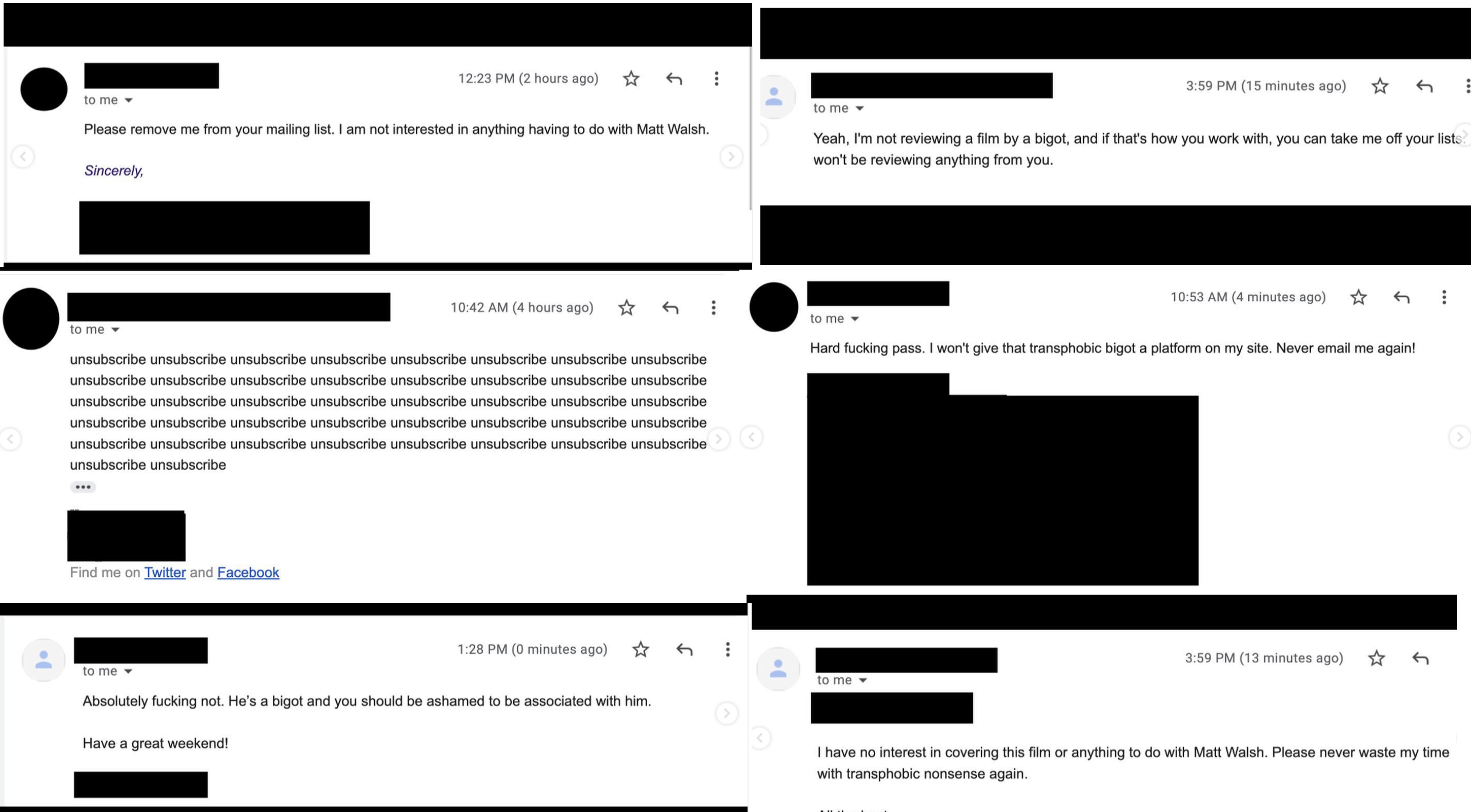 Why would they be so afraid? Because the subject is Matt Walsh, who is considered at the very top of the enemies list on Twitter, alongside Ben Shapiro, Elon Musk and Donald Trump (when he was on Twitter). Walsh says that he is now the recipient of death threats. Even associating with him at all could probably get someone fired if they reviewed the film.

What is a Woman is a more or less a profile of Matt Walsh. The film more or less reflects his past year of asking the question to activists, “what is a woman” since apparently this is a difficult thing to explain. No one wants to be called a TERF.  It’s a bit of a word tangle because of the conflicting declarations from the Left that “trans women are women” but then the word salad of having to contort to be inclusive by saying things like “birthing people” or vagina havers.” It comes from a well-intentioned place. They don’t want anyone to feel marginalized or left out but in so doing it does beg the question, well then how do you define “woman”?

He’s written a children’s book called Johnny the Walrus (deemed anti-trans), he has a podcast, he went on Dr. Phil.

Granted, it’s understandable that they would not want to give oxygen to someone they consider transphobic. And more importantly, put their own jobs on the line. Don’t forget that Sean O’Connell nearly lost his job at Cinemablend for writing a review some deemed “offensive.” Any film critic reviewing this documentary, which is far more controversial than the movie Red would ever be, could get fired.

I am not shaming them for opting out. I completely understand that, as should everyone.

Some journalists have covered it, like Jeff Wells at Hollywood-Elsewhere:

The main impetus behind the hardcore progressive wokester cabal is not just about showing compassion and acceptance for historically marginalized or put-upon communities (African Americans, women, LGBTQ, transgender), but also about bending over backwards to make things right by abruptly and radically reversing biological embeds. One way of achieving this is by threatening sensible centrists and left-moderates with toxic social-media accusations and even career destruction.

And Matt Taibbi, who is fearless when it comes to covering things journalists are too afraid to touch – you should read his whole piece — writes:

Which brings us to Matt Walsh’s new movie, What is a Woman?, simultaneously the most talked-about and most ignored documentary in the world. The movie, which tries and fails to get trans activists, academics, and medical professionals to offer a definition of womanhood, is both trending and more or less totally un-reviewed. The most prominent outlets who’ve admitted to watching it have names like the Christian Postand Spectator Australia, despite a 96% audience rating on Rotten Tomatoes. The film is narrated by Walsh and distributed by Ben Shapiro’s conservative Daily Wire, which is crucial to understanding why it will be a success even if — especially if — no mainstream reviewers touch it.

The controversy in the film could have been explored to great effect by someone on the “other side,” but since the topic mostly just terrifies people over here, the entire debate has become the property of conservatives like Walsh and Christopher Rufo by default. (There’s a small community on the left of people like Dansky that’s been trying to elevate various concerns for years, without much success — more on them in a moment).

That is the problem here, that no one on the other side, no prominent film critic, has either the freedom or the courage to cover this. It seems strange to me that everyone is so afraid, even if I know their jobs will be on the line. So why isn’t everyone standing up against that? Why aren’t they standing by their writers?

The only reason I’m covering it, because believe me, the last thing I need is for the activists on Twitter who are the most militant and vicious to come after me or those who work for me. I debated it for a while. If I ignored it I would not bring any trauma on myself or my crew. If I ignored, though, I would also be missing an important story with regard to the evolution of film criticism, and I think that matters a lot.

As of this moment, there is such a strident and terrifying climate of fear that activists have tried to get Netflix to dump Dave Chappelle and Ricky Gervais – and to Netflix’s credit they refused. They have gotten a number of very good journalists fired from their jobs – like Katie Herzog and Jesse Singal of the Blocked and Reported podcast, not to mention Andrew Sullivan from New York Magazine. They have tried to get books banned and have forced publishing companies to punish or censor content they deem offensive. While this is true across the board with almost every group on the Left (see the latest hilarious suspension of Dave Weigel from The Washington Post for RTing a dumb joke, David Edelstein dumped from NPR for a joke on Facebook, and on and on it goes) it is most extreme with the transgender activists online.

Extremism begets extremism, however, and they are losing more supporters and allies than they are attracting because of their demands for ideological compliance with a fast-moving movement that starting to scare parents away from voting for the Democrats (to be blunt). No one is allowed to ask questions. Jobs are threatened. They have silenced journalists, scientists, educators – and now, apparently, film critics.

A while back I mentioned that the pendulum was starting to swing and the backlash was coming. In silencing all dissent and conversation on the Left, that has handed over the debate about this issue to the Right where they have absolutely no problem talking about it. Trump will be shouting it from the rooftops. That means people are going to start taking sides for or against. If there is no reasonable voice in the middle helping the majority through this, they are going to flip to the Right and they are going to want to watch Matt Walsh’s documentary, especially since everyone is silent about it everywhere else.

The Conservative site The Daily Wire has been branching out and trying to compete, even if in a small way, with Hollywood’s lurch towards progressive political content. They have released three feature films already, two of them with a central female protagonist saving the day, and a third that will launch this week that was produced by, and stars, Gina Carano called Terror on the Prairie. That will mean three of their feature films will be action movies with a central female star.

Walsh, I think, knows that just asking the question makes his point. It can’t be answered in the way he believes it should be, that it’s a biological, not ideological, definition. He shows both sides in terms of how they would answer that question. On the Left, it’s very much: gender is a social construct and gender is fluid because it is about identity. On the Right or in the middle it’s very much about biology – that for all of human existence men and women are defined by their reproductive organs.

I don’t think most people in this country agree with him about transgender people or their rights, but neither do they agree with the other end of the spectrum. Most people are somewhere in the middle. They deserve to have some critics cover this film, even if they trash it.

Things are evolving very quickly on the Left, with new rules being implemented every day and those rules are mandated upon anyone who wants to be accepted into the community of good people doing good things. If anyone on the Left objects to any of it – from President Biden on down – they are staying silent. But journalists and, I’d argue, film critics are required to rise above that fear.

This Bill Maher video, which addresses what I am talking about here, already has 3 million views:

We have a very LGBTQ community here at AwardsDaily and we always have. After all, I once helped someone avoid suicide in the darkest days when Crash beat Brokeback. That might seem silly to some, but it was a trauma to those whose love for the Oscars collided with what they viewed as homophobia in rejecting Brokeback Mountain. We have an intersectional staff here as well.  That, more than anything, is why I didn’t want to cover this topic. I don’t want to hurt my readers here or my staff.

But I also don’t want to be yet another person too afraid to talk about something. If you remember nothing else remember this: information, like truth, like art wants to be free.

What is a Woman is available on the Daily Wire for $12. Or probably, by now, on Youtube.