I literally could’ve spoken to And Just Like That... costume designers, Molly Rogers and Danny Santiago, for days. When you think of the universe of Sex and the City, you think of all the couture clothes worn by these four iconic characters, but And Just Like That… is a different animal. New York City has evolved and so have these women. After coming through a pandemic, Rogers and Santiago created a feast of color and shape for this new series. The costume design will leave you gobsmacked.

Before we dove into some questions, we talked a little bit about how devout the fanbase of this world is. At the end of the day, Rogers and Santiago love clothes, and they love how much of a conversation and buzz the show created.

“We could be digging through someone’s storage unit, and you can find something that you just think, ‘Oh, this needs to be on television,'” Rogers said. “Like the [Jean Paul] Gautier suit where everyone said she looked like The Joker. Regardless of remarks or critiques, it’s exciting to find things that have never been on TV before, and we have such a great actress to feature quirky things on. Danny and I always say that this show is such a unicorn. When you run off and do other work away from this show, you realize what a special showcase of the costumes it is.”

In the first moment of the first episode, the camera searches for our trio in a crowded restaurant, and they magically appear like a mirage. I remember texting a friend and saying, ‘Damn, they all look so good.’ Carrie is wearing a hat like only Carrie Bradshaw can. Charlotte is wearing a conservative dress with a bright, pink top, and Miranda has a sexy, striped dress. There is already so much character reflected in these first outfits, and Santiago admitted that they wanted to make a strong first impression.

“We wanted to make a huge statement. Especially because it was the first time that we’ve seen these women in so long, and we are just coming out of the pandemic. We wanted to bring something special to the screen. We wanted to show that the city is alive again. We wanted to show excitement and happiness. They are just as fabulous as they were before. And it was important to bring New York into that as well.”

“Danny and I talked about exploding with color since everyone was dressing for Zoom,” Rogers added. “We wanted it to be like when The Wizard of Oz goes to Technicolor. And it was hard because the second episode was a funeral.”

Carrie’s dress for Big’s funeral might be the most important dress she ever selected, and Stanford says, ‘She’s our Jackie O’ when he sees her before the service. It has clean lines, and a classic shape. It reminded me of when she shows Anthony and Charlotte her wedding dress in the first movie when she refers to her first wedding dress idea as “simple and classic.”

“We brought in the world with that–every brand was a contender,” Santiago said. “We sought out black dresses with certain types of silhouettes, because we wanted to make it striking on screen. We had racks and racks of dresses. The one that kept coming back was a dress that was in my warehouse in Florida that happens to be a vintage, 1950s, Lillie Rubin dress. We took it last minute actually. It just kept coming back, because of the silhouette. It was almost a dancer unitard with a full skirt, so it kind of a callback. It was very romantic at the same time, but it didn’t overpower what the scene was supposed to be. We were, in the end, very happy. The same way that the hat, and we initially didn’t want any hats to take away from the scene. But this was a straw, vintage plate hat, and it provided with Carrie with a shield. When you saw her in that space–this stark, white, art gallery space–she stood out so amazingly. It said everything it needed to say.”

“It fit the bill of her being our Jackie O. Those shoes were from a thrift store that one of the shoppers got,” Rogers said, when I told her how much I loved Carrie’s footwear. “Those tore up her feet, and Sarah Jessica [Parker] stuck with them. She retired them immediately.”

Many new characters enter this season, and everyone was rightfully obsessed with Sarita Choudhury’s Seema. That hair, that attitude, those clothes–fabulous. A lot of Seema’s wardrobe consists of muted colors–dark creams and chocolates–to show how she’s a woman on the prowl.

“Since she’s a high-powered real estate agent, she’s showing dotcom guys seventy million dollar apartments, so she’s very connected,” Rogers said. “That calls for a level of restraint and sophistication. Once we found out that she had a chauffer-driven, chocolate Mercedes, we thought…why not match her to her car? We put her in a lot of mochas and chocolates and bronzes.”

“We called her the panther,” Santiago added, with a knowing smirk.

“In our show and tell to Michael Patrick King, we referenced Bianca Jagger, Rogers admitted. “She was always in slinky outfits. It’s about who is cast. You can think about making someone a jungle cat in the jungle of New York City. Sarita Choudhury just happens to be someone who can really pull it off. It’s so fun to art direct someone to their car, so she was always in dark chocolates and nougat.”

Everyone has an opinion of Che Diaz, and Sara Ramirez wears a lot of dark colors–they keep it simple. One of the most interesting costume journeys was to see how Miranda evolved as she got closer to Ramirez’s character. Miranda hasn’t gotten excited for a date in many years, so seeing her showing herself off was a treat this season.

“Even for the show, Miranda had an evolution,” Santiago said. “She is not a lawyer anymore, and she was coming from a very tailored world. We knew we were going to change her style. The pants aren’t as structured or stiff, and her shirts are softer in the fabrics and materials. When she was working in an office, we wanted to give that vibe. We wanted more ease to her. With Che, she lost her sexuality in her marriage, and she’s finding herself again. Miranda wants to portray more sensuality, and we wanted to do that with something in the comedy club and the burgundy jumpsuit. She wanted to venture out from her relationship to find that sexuality again.”

Rogers was smart to remind me that this relationship is an affair, so it adds another layer of sneaking around.

“She’s more curvaceous even though she’s not sure where the relationship is going. It’s illicit, too, since she’s sneaking around on her marriage with Steve. The last time we see her in season one, she’s headed to the airport, so she’s acting a bit like a groupie. Miranda has a lot at stake. Poor Steve.”

The dress Carrie wears in Paris (pictured above) is the kind of garment that Sarah Jessica Park as Carrie Bradshaw could pull off. It hangs off her frame delicately, and both of the costume designers were obsessed with the color. Much like a lot of Carrie’s bold fashion over the years, you can love it or hate it, but you will definitely have a strong opinion about it. This piece is absolutely exquisite, and they almost referenced an important piece seen earlier in the series.

“We knew it was going to be Paris, and we had so many ideas, Santiago said. “That dress was in the first fitting, and when she put it on, she said, ‘yes.’ We held onto it throughout the entire shooting schedule. It was a Valentino couture dress from a few seasons ago, and he was kind enough to let us hold onto it. We thought there might be something else, but it always came back to that dress. We kept thinking about how striking it would be to see it all lit up, and we knew it would just soak up all the beautiful light. Then they showed the newer Valentino collection, and that’s where the gloves came from. We thought they paired so well together.”

“We thought briefly about re-imagining the funeral dress somehow on the bridge,” Rogers disclosed. “But that gown–with that shape and that drama–with the Eiffel Tower bag was just it.”

“It was just so regal. It had its own Funny Face moment. It had that fantasy,” Santiago added, with a swoon.

Every time you watch the series (or re-watch the original) you know what outfit you’d want to rock down the streets of New York City. From the first season of And Just Like That…, I want to swipe three items for my own closet. Leroy McClain’s Andre wears a kind of patchwork, red and blue, shirt the first time he’s on screen. I was obsessed with the hat Carrie wears when she admits the diaphragm story on her podcast while she’s high on painkillers (the hat belongs to Santiago, so I will find a way to borrow it from him), and I need the Hot Fellas romper for Pride this season. With so much to choose from, Santiago knew immediately what he would want.

“That Valentino gown is an epic piece that I need,” he said.

Rogers’ choice was a bit more mysterious, and we will have to speculate when season two drops.

“What I want is something that we couldn’t find a place for that we might put in season two. Sometimes you don’t get to put everything you want into a season, so you put it in storage until the next time around.” 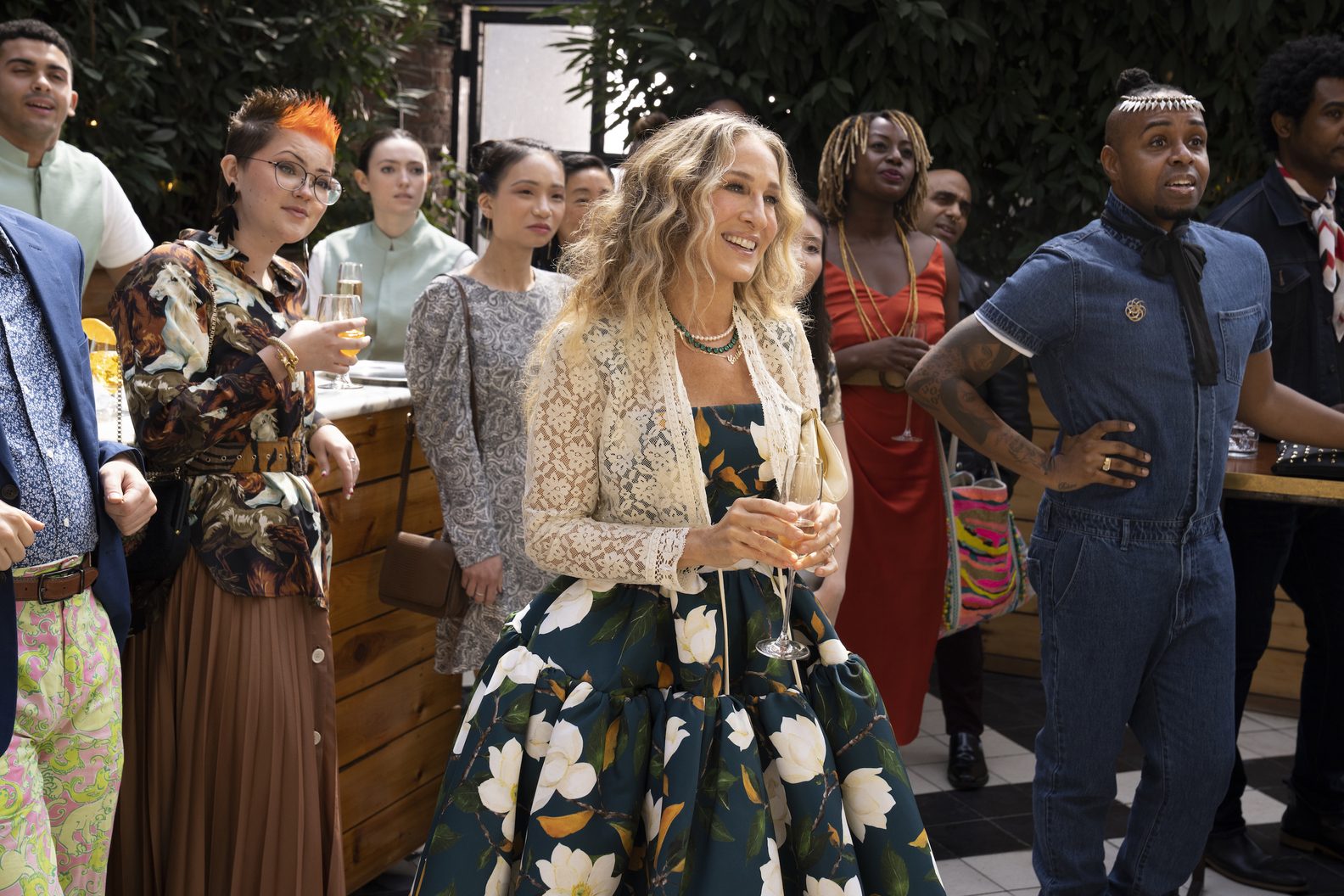 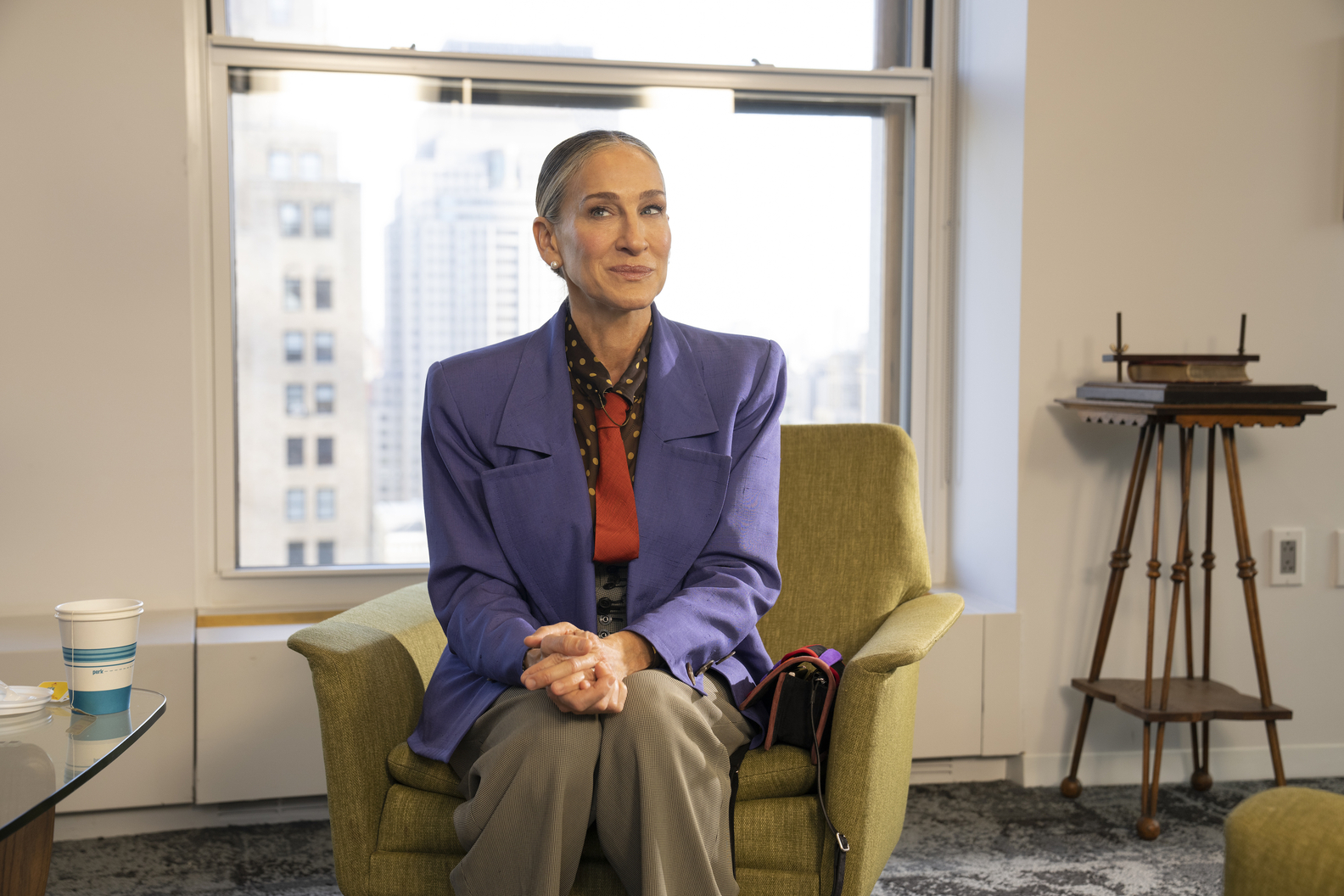 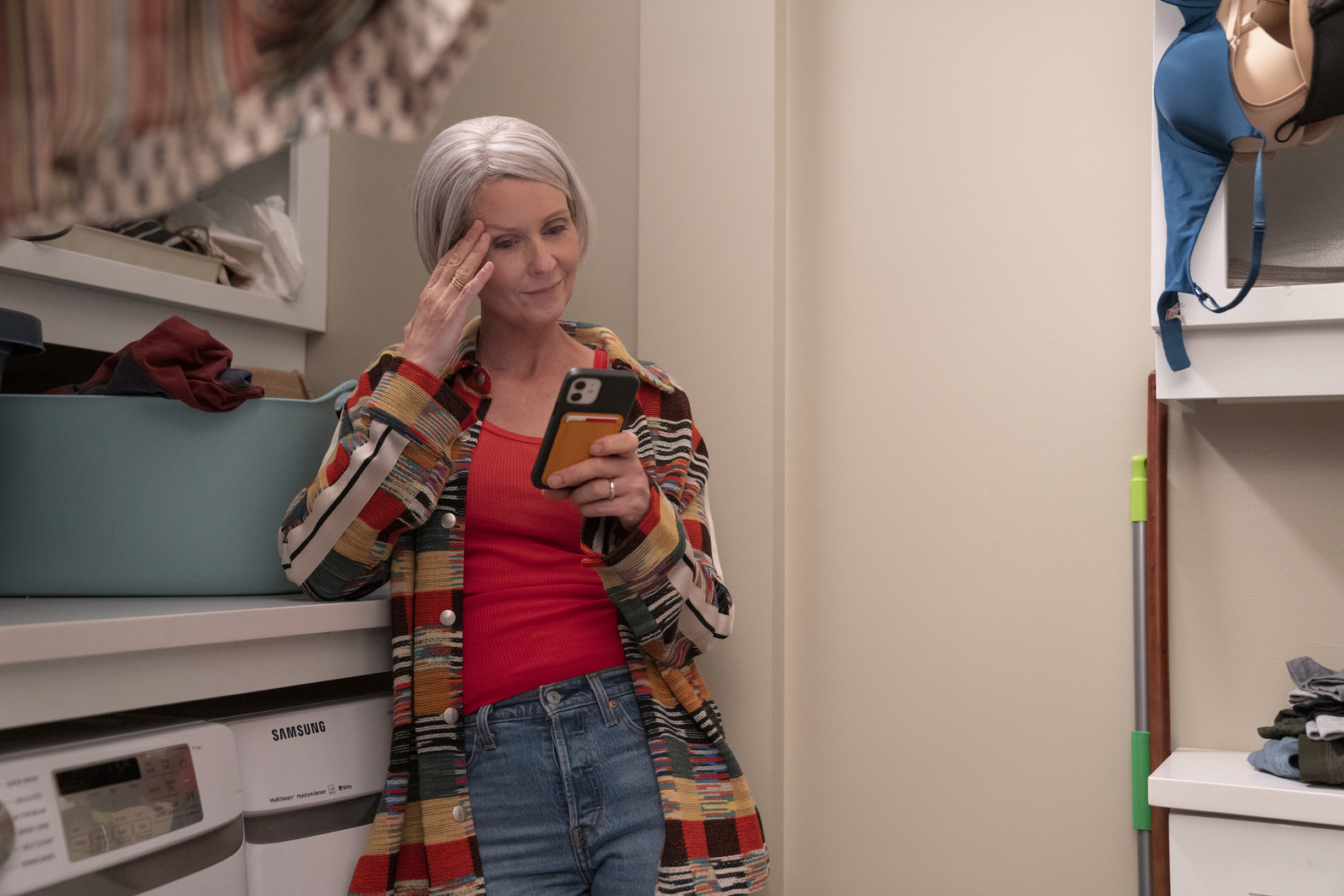 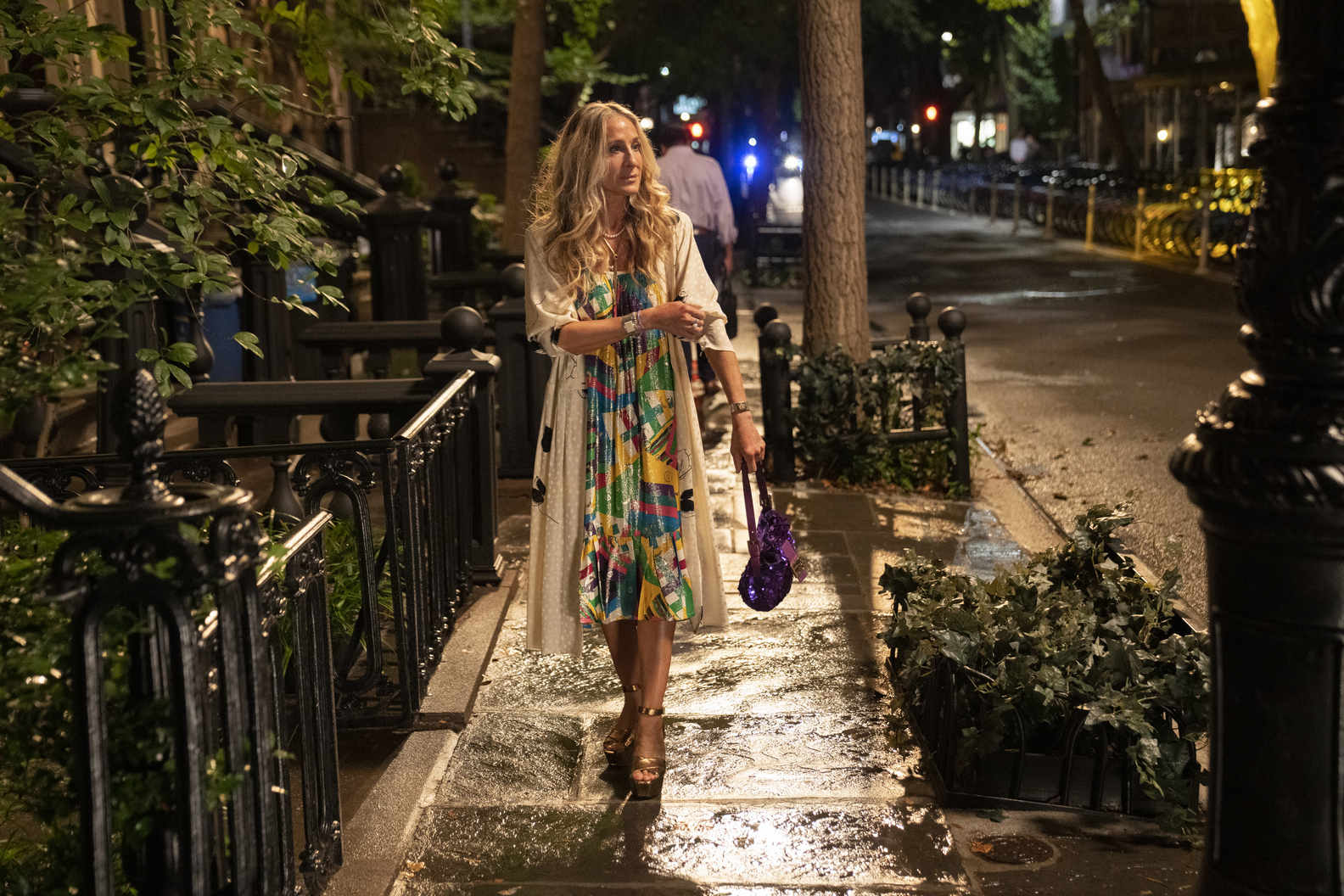 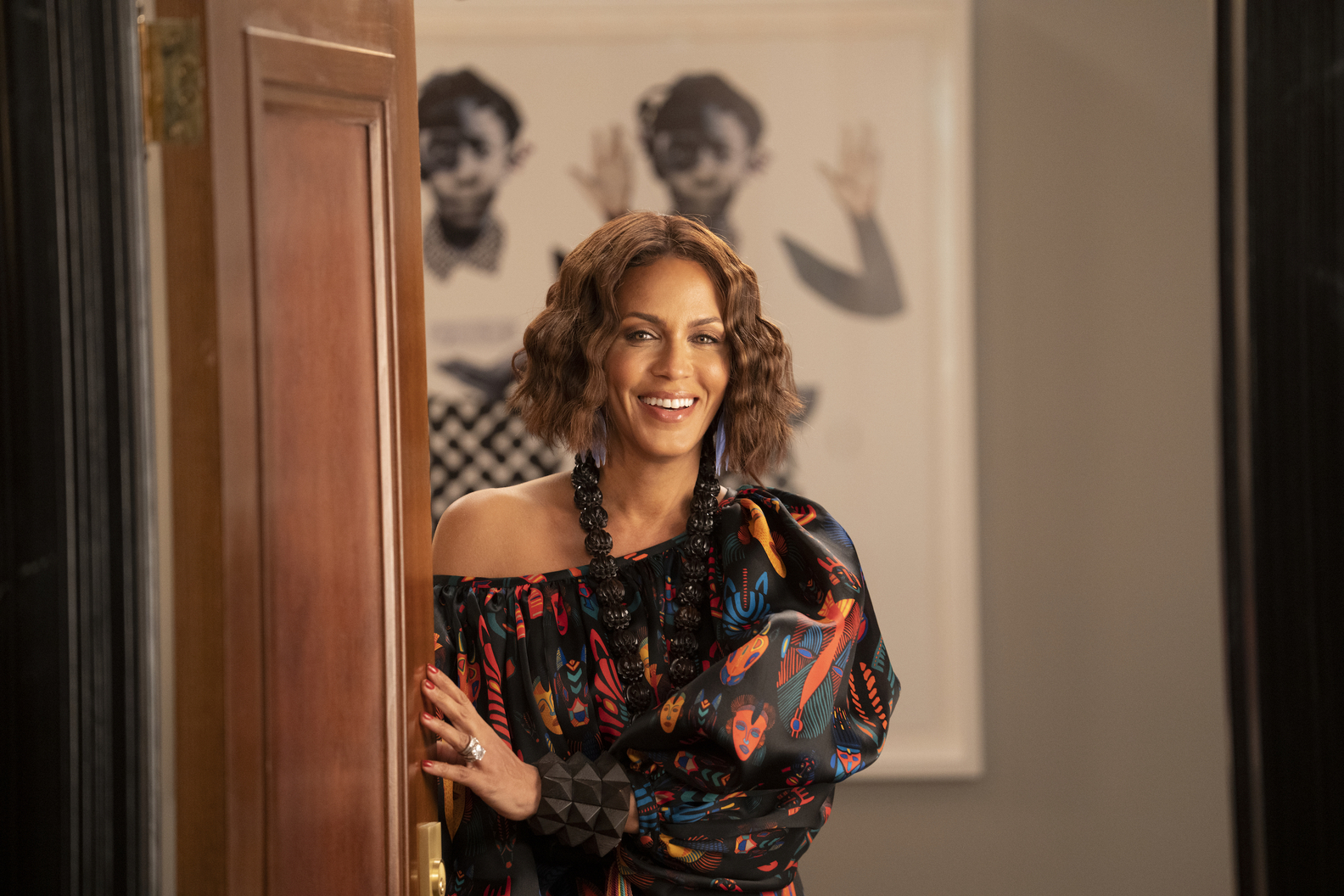 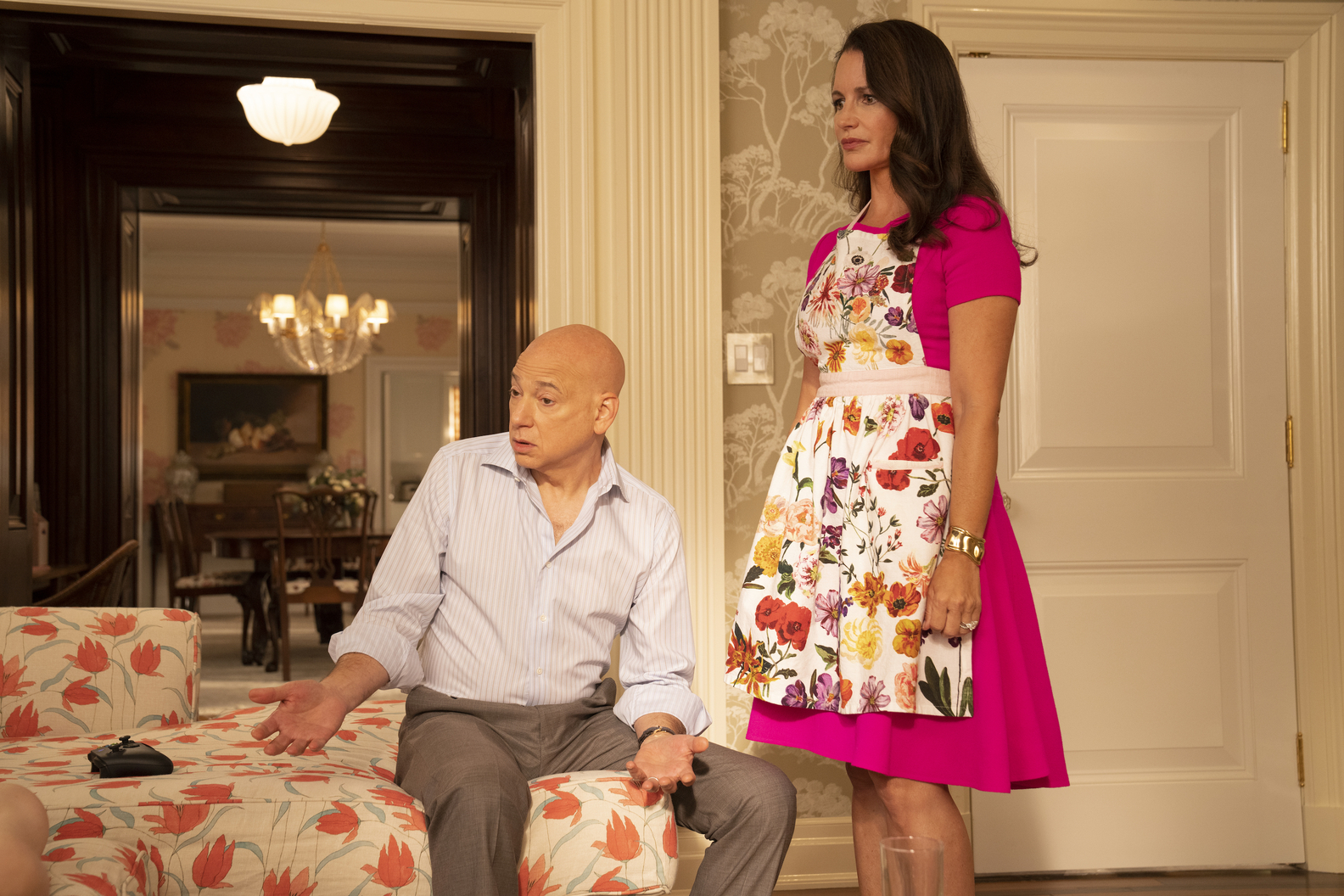 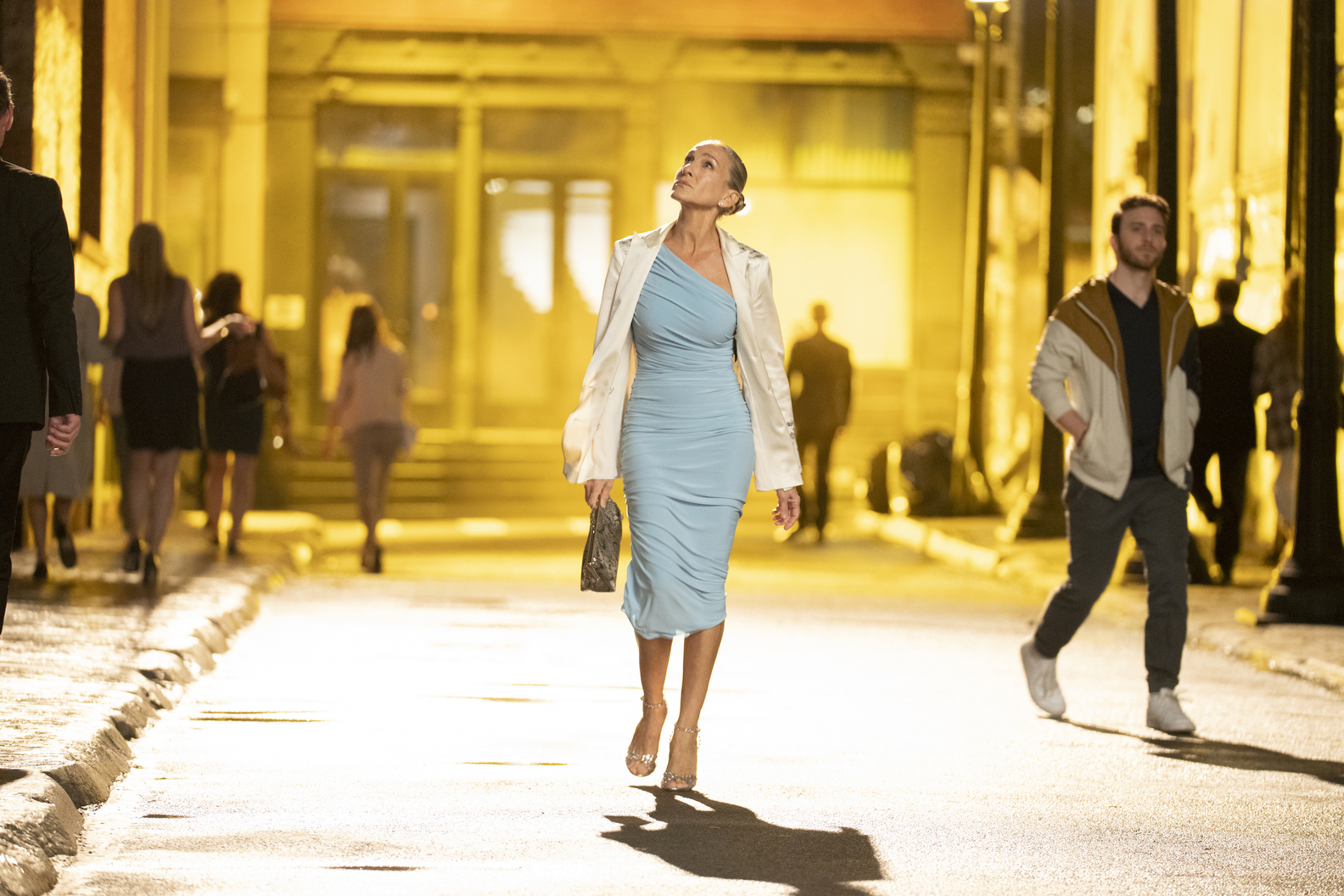