Predictions Friday: The Driving Narratives of 2023

Those of you who have long followed my site know that it’s been around through five presidencies. We’ve felt the pendulum shift here as it’s been felt throughout our culture for the past 22 years. Through all of it, I have tried to look at how the Oscars are impacted by what is happening in our culture, our government, our economy, and various other sorts of things. We’ve watched economics, technology and politics to factor in their impact. For the past six years, the Oscars have been a political entity more than almost anything else. That has meant a massive drop in interest by the general public, at least in my opinion. I’m sure others think differently.

Since 2020, the Oscars and film awards overall have been more about fixing our broken country, I think, than they have been about awarding films people like or think are good. I think the industry has been in a different mindset since the cultural revolution of 2020 where everything changed almost overnight. The BAFTA completely changed. Hollywood changed. The Oscars changed.

The question is whether the pendulum is shifting, how much it is shifting and where this goes from here.

In terms of how pendulum-swing adherents see it shaping up, they have named 2023 as the climax of the “we” era, where witch hunts will be at their absolute worst. They say that through each of these cycles, we reach a moment where there is too much of a good thing. Too many good people (a utopia) eventually turn on people who step out of line or are non-compliant. Witch hunts then purge the undesirables from their ranks. I didn’t think it would get as bad as it’s now. But here we are, heading into the thick of the storm.

You can read more about pendulum theory here. But suffice it to say, we’re at a point where we are about to start shifting again, heading, eventually, towards another “me” era. It kind of seems like we’re in a “me” era now in terms of it being the age of narcissism and all — I think that is going to be part of what starts to shift the overall perception of success. Yes, it is likely going to impact the Oscar race eventually. 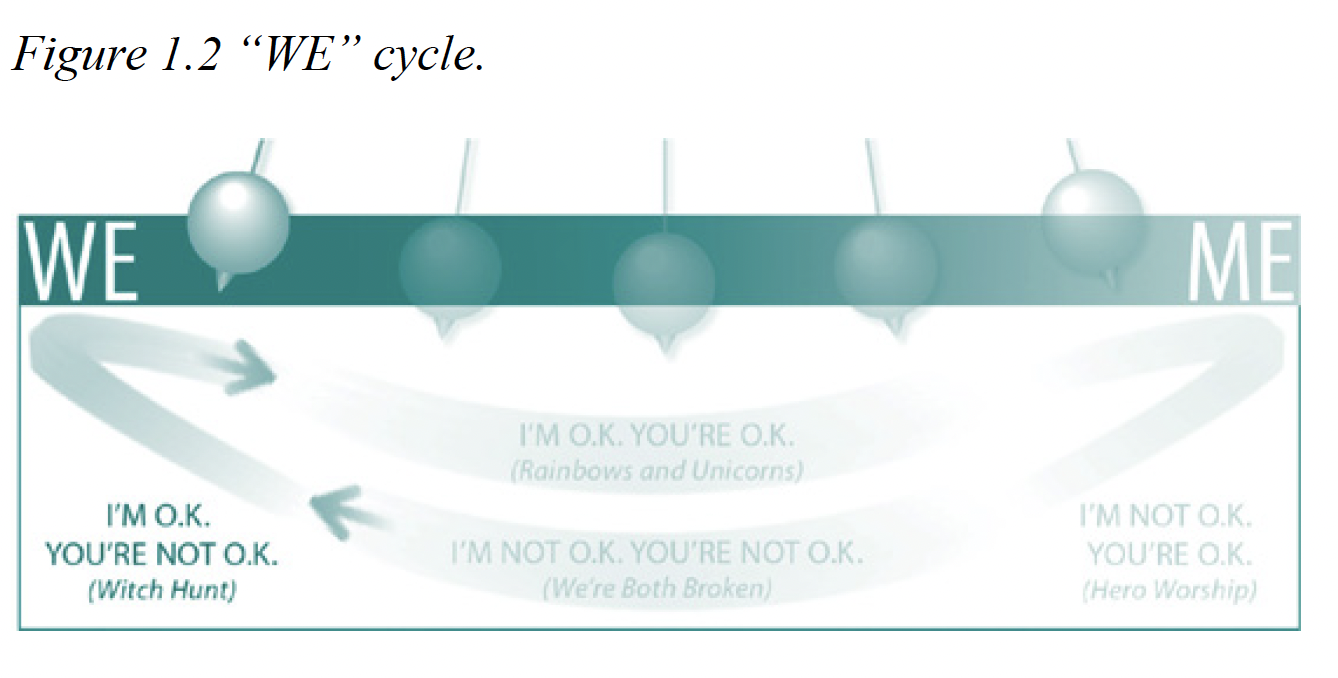 You might see this as a “conspiracy theory” or gobbledegook – okay fine. I think there is SOMETHING to it, though clearly it can’t explain everything. Either way, we have a few more years of madness before this awful period ends. The last height of the “We” phase was 1943, 80 years ago. The McCarthy era lasted into the mid-1950s. Much of my life took place after that. I was born into and came of age in the “me” era, which explains why I continually chafe against so much as what is happening now. My daughter was born into and came of age in the “we” era, but I’ll bet she’d dig the “me” era too. The pendulum swings one way, then it swings the other way.

Pendulum was published in 2012, which means it was written and researched much earlier than that, still the authors were able to predict the time we’re living through with a fair amount of accuracy when they write:

Senator Joseph McCarthy was an American promoter of this witch-hunt attitude at America’s most recent “We” Zenith of 1943 (see the “House Un-American Activities Committee,” 1937–1953); Adolf Hitler was the German promoter (see the Holocaust, 1933–1945); and Joseph Stalin was the Soviet promoter (see the Great Purge, 1936–1938). Our hope is that we might collectively choose to skip this development as we approach the “We” Zenith of 2023. If enough of us are aware of this trend toward judgmental self-righteousness, perhaps we can resist demonizing those who disagree with us and avoid the societal polarization that results from it. A truly great society is one in which being unpopular can be safe.

Probably things are likely going to get a lot worse before they get a lot better. President Eisenhower had to stop his fellow Republican, Joseph McCarthy, from further dividing the country by chasing Communists. We don’t have that kind of leader, at least not one that has yet emerged, so the witch hunts will continue.

However, Johnny Depp suing Amber Heard and winning, Netflix telling its employees if they can’t handle the heat, get out of the kitchen, Elon Musk potentially buying Twitter all seem to indicate that some kind of shift is underway.

All of this to say that we’re living through a phase of transition in many different ways, which is shaping up like a true “Fourth Turning” as promised.

People vote for contenders that make them feel good. Giving their vote to a movie or a person because they have been told the film is great and they “should” isn’t as much of a motivator as when they feel like good people when voting.

What drives their urgency to vote? Does the film itself drive them to push it to the top of their ballots, like with, say, The King’s Speech (speech impediment), Slumdog Millionaire (impoverished kids in India), The Hurt Locker (first female to win BD/BP), The Artist (silent film star replaced by talkies), Birdman (real actor replaced by superhero movies)… there is always a reason a film wins, up to and including CODA last year.

Best Director has also been very international since the expansion of the Best Picture ballot. I am not sure why this is, but that’s how it’s turned out.

Compare that to the previous period prior to the expanded ballot:

Maybe it means something, maybe it doesn’t. My brain always looks at patterns of history and that is definitely a pattern shift from local to global appreciation of cinema.

Remember that book, Pendulum: How Past Generations Shape our Present and Predict Our Future? We are, according to the generations theory, in a “Fourth Turning” right now which means things are going to be rough going for a while as we transition out of this period and into a new one.

The authors separate out the 80 year cycle of the Fourth Turning into two 40-year cycles:

We is described as:

1. demands conformity for the common good;
2. applauds personal responsibility;
3. believes a million men are wiser than one man: “Two heads are better than one”;
4. wants to create a better world;
5. is about small actions;
6. desires to be a productive member of the team: “I came, I saw, I concurred”;
7. admires individual humility and is attracted to thoughtful persons;
8. believes leadership is “This is the problem as I see it. Please consider the things I am telling you and perhaps we can solve this problem together”; and
9. strengthens a society’s sense of purpose as it considers all its problems.

And “Me” is described as:

1. demands freedom of expression;
2. applauds personal liberty;
3. believes one man is wiser than a million men: “A camel is a racehorse designed by a committee”;
4. wants to achieve a better life;
5. is about big dreams;
6. desires to be Number One: “I came, I saw, I conquered”;
7. admires individual confidence and is attracted to decisive persons;
8. believes leadership is “Look at me. Admire me. Emulate me if you can”; and
9. strengthens a society’s sense of identity as it elevates attractive heroes.

Here are Erik Anderson’s May predictions at AwardsWatch for Best Director:

These are the names that catch my interest the most — in alphabetical order in terms of the Oscar race:

That looks like a very white, very male list. I always feel so much less hip than my Film Twitter brethren but you can’t teach an old dog new tricks and that’s the truth. But an all-white, all-male lineup could be tantamount to World War III so I doubt that’s going to happen.

For women, there’s potentially Audrey Diwan for Happening, Olivia Wilde for Don’t Worry, Darling, Maria Schafer for She Said, Sarah Polley for Women Talking. Erik is betting on Polley. I’m thinking more Schrader. But we have absolutely no way of knowing.

We also don’t know what kinds of narratives are going influence this year’s Oscar race. That’s because we don’t yet know what is going to happen in our society. Here are some cliffhangers for you:

The November midterms — how bad is it going to be for Democrats? Can they rally and stop a red wave?

Do we go to hot war with Russia? With ourselves?

How bad is inflation going to get?

Will America’s strong box office start continue through the next few months?

In all of the years I’ve been doing this site, and in all the years I’ve been alive I don’t think I’ve ever felt more worried about the state of almost everything. Probably the best thing we can do is try to humanize our enemies, reach out to those we don’t agree with, spend time with friends and family, and yes, go to the movies.