In the summer of 1991, Katia and Maurice Krafft, a fearless French couple who shared a passionate love for nature, volcanoes, and each other, met their untimely deaths while studying the Unzen volcano in Japan. The pair spent two decades working together as volcanologists – geologists who study active volcanoes to better forecast their eruptive activity. Their efforts helped mitigate the damage that can be inflicted upon communities adjacent to these towers of destructive beauty. The Kraffts were pioneers in their industry. They used film and photography to document their research and often risked their lives to better understand this calamitous phenomenon of nature.

In Fire of Love, director Sara Dosa seeks to capture this extraordinary couple’s unconventional love story. Through hundreds of hours of footage and thousands of photos, Dosa capably chronicles how Katia and Maurice discovered an enthusiasm for volcanoes at an early age (she with Mt. Etna and he with Mt. Stromboli). The film provides us with a small glimpse of how they met, fell in love, and were married. Dosa’s perceptive storytelling works effectively. Rather than concentrating on their origins together, Dosa focuses more on the love they shared as they dedicated their lives to their research. It’s an action-speaks-louder-than-words approach, as there are no moments of intimacy captured between the pair. Their love for each other is evident in the way they share their space.

While part of their story remains shrouded in mystery, Fire of Love surrenders to the fact that Katia and Maurice’s ominous, last moments have been lost to time. What matters more is the incredible journey they took, lost together in the loneliness of the molten ash and other miracles of the natural world. 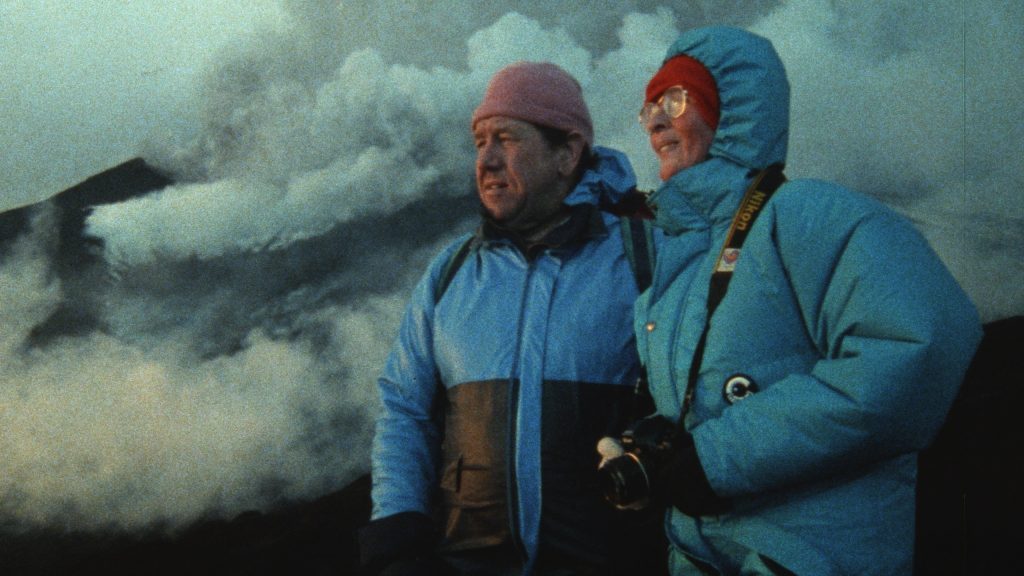 The film is masterfully written by Dosa, Shane Boris, Erin Casper, and Jocelyn Chaput. Their romanticized, poetic words are narrated by Miranda July, who guides the film with a sense of wonder and awe. I was reminded of the curiosity and richness found often in the films of Terrence Malick. There are plenty of astonishing images of the untamed elements – rolling rivers of fire spewing tides of lava onto its rocky, blackened shores. Blue, tranquil skies suddenly becoming canvased with ash-laden plumes. But the true symmetry of the film was realized in its quiet, desolate moments. It is riveting to watch as the couple shifts their perspective. What started as a means of escape from humanity, evolves into a resolute endeavor to save as many lives as possible.

National Geographic once again delivers a film worthy of being required high school curriculum. Aside from the alluring story it recounts, there is a captivating science class taking place that slips through undetected. From plate tectonics to the parabolic paths of the fierce, red-hot lava, Fire of Love is a fascinating and illuminative documentary.

One of the breakout documentaries at Sundance, Fire of Love will play as the Opening Night Feature at next week’s Nantucket Film Festival (which I am covering for Awards Daily). It is a must-see for lovers of science and nature, and a testimony to those who shared that love together.