My Old School Review and a Date with John Turturro

In 1993, Bearsden Academy, a state secondary school in an affluent suburb of Glasgow, Scotland, welcomed 16-year-old Brandon Lee to its flock. Brandon was a transfer student from Canada, where he had been privately educated while touring with his opera-singing mother. Following her untimely death, Brandon moved to the Bearsden district to live with his doting grandmother. What happened over the course of the next two years became the stuff of local folklore.

Brandon was an irregular student, both in physical appearance and with his inexplicable wealth of knowledge. He was gifted and set to attend medical school following his time at Bearsden. He was an ideal student: intelligent, engaged, and one who befriended the bullied. He would star in the school’s production of South Pacific, taking the lead role and smashing it. Then, one day while off on holiday with a few classmates, his astonishing secret was exposed.

Jono McLeod’s stranger-than-fiction retelling of his time at Bearsden reveals one of the greatest hoaxes of all time. An unbelievable story that becomes hard to write about without spilling the beans and spoiling the film. Trust me when I say that the less you know about this film heading in, the better.

The testimonials from Brandon’s classmates add richness to a story that was already well-supplied with layers. McLeod’s choice to tell portions of the documentary with a Daria-style animation are reflective of a time of anger and frustration (the grunge era that I grew up in). This was very fitting, as you will learn those are a few of the primary emotions that led to Brandon’s actions. One of McLeod’s other choices, to use actor Alan Cummings to lip sync the words of an off-camera Brandon (who wanted to be heard but not seen) was a bit distracting. Cummings handled the work well, but I was puzzled with this approach versus just having Brandon’s narration overlap the story that was unfolding. I’m sure there’s a message or reasoning behind this choice. It is just a minor complaint, though, and one that doesn’t stop the film from being absolutely hypnotic from start to finish.

My Old School is a captivating walk down memory lane that is backloaded with several chill-inducing moments. The film whimsically investigates how our memories sometimes differ from reality and delivers an improbable story that has to be seen to be believed. The brainteaser is that once it’s seen, it’s hard to comprehend how something like this could have ever been pulled off.

My Old School was the only film I took in on Day 3. I was able to attend a couple of the festival’s more intimate and distinguished events thanks to my friends at Frank PR (who arranged this trip for me). One of the highlights of the festival came next – John Turturro’s reading of his script in development, Howard’s Beach.

Turturro is known to many for his roles in the films of Spike Lee (Do the Right Thing, He Got Game, Clockers, Jungle Fever, among others) and the Coen Brothers (Barton Fink, The Big Lebowski, O Brother, Where Art Thou?, and Miller’s Crossing). He recently starred in The Batman, playing Carmine Falcone, and AppleTV’s Severance, the brilliant show directed by one of the Nantucket Film Festival’s Board of Directors, Ben Stiller.

While limited information exists on his script (this was the first time it had been read anywhere in the world), what we did hear was quite enthralling. Howard’s Beach is a neighborhood in Queens, New York where racial tensions became elevated in when a black man was struck and killed by a car in 1986. He had been beaten by a gang of white youths and was killed while trying to get away. There is an intricate love story between a white male (Turturro) and a black female (Alice Smith) taking place amidst this tumultuous time. 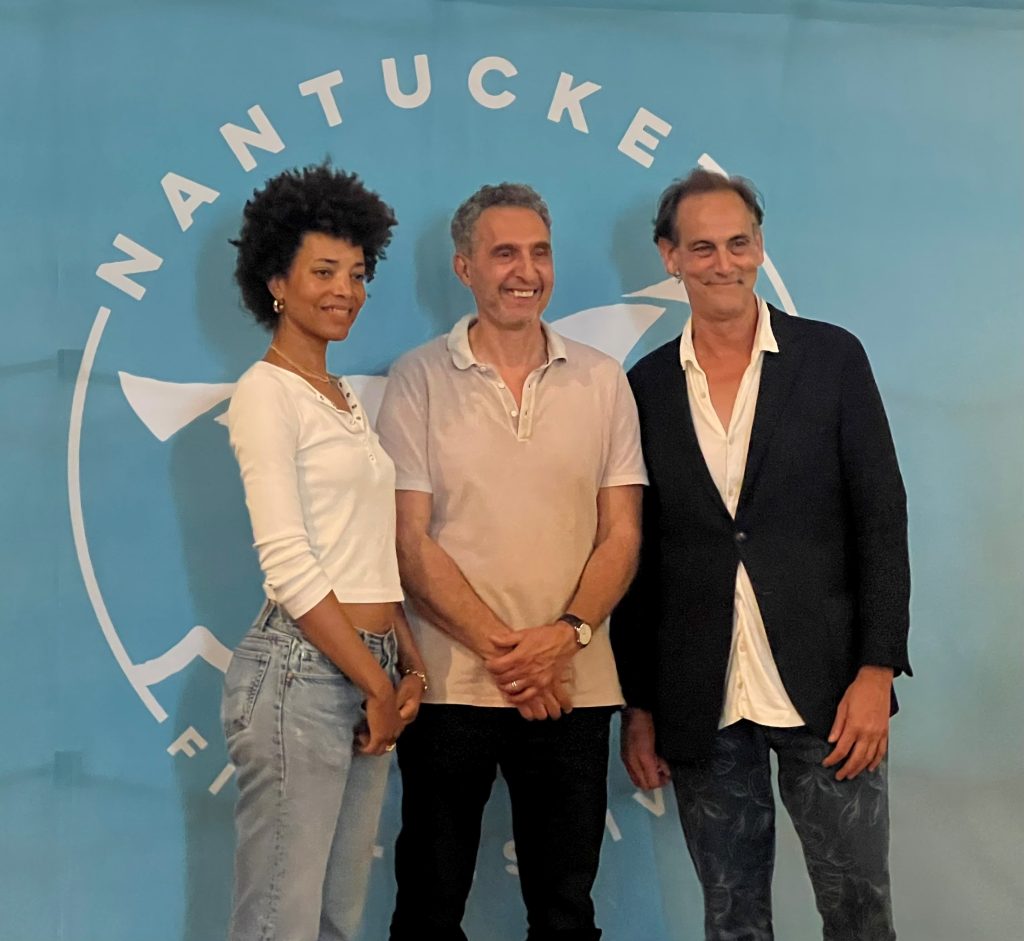 Turturro set the tone for the reading by first playing La Traviata: Act III: Addio Del Passato, the song that will open the film. Actor Damian Young (Ozark) read the stage directions while Turturro and Smith performed a few scenes from the film. While the scenes were taken out of full context, the little vignette’s they shared made the audience excited to hear more.

Following the reading, Turturro had a brief Q&A with Rolling Stone’s Tatiana Siegel. He discussed Spike Lee’s involvement with producing the script into a film as well as some more personal anecdotes. The reading took place on the day that the Supreme Court overturned Roe v. Wade, which struck a personal note for the actor, whose grandmother died during a botched abortion. He spoke lightly on this difficult day and what it meant to him. He also discussed his determination to get this film made, some of the changes in the industry during his career, how he chose certain roles and passed on others, and how horrified it can feel to see himself on screen. It was a very personal and riveting event, and one that added to the magic of the Nantucket Film Festival.

Later that evening, I attended another seminal celebration at Nantucket – the Late Night Storytelling event that takes place at the luxurious home of Cecelia Joyce Johnson. The gala was hosted by comedian Ophira Eisenberg and held a timely, post-pandemic theme of “keep calm and carry on.” The event welcomes guest speakers to tell a five-minute story based on that topic. The panel of speakers included writers, actors, directors, and comedians, including James Morosini (I Love My Dad (writer/director/actor) – who told a hilarious story about how he lost his virginity – Peter Farrelly (Green Book writer/director), Jessica Edwards (Skate Dreams director), and Jason Headley (Lightyear writer), among others.

The event was quite extraordinary and one of the wonderful showcases that should not be missed at Nantucket.

Tokyo of 'Real World Homecoming: NOLA' Reveals How They Really Rerecorded 'Come On Be My Baby Tonight' [VIDEO]