Day four at Nantucket would prove to be the best day of the festival. Aside from some great films, the Screenwriters Tribute highlighted the celebrations today. Those receiving honors this year include Barry Jenkins (Moonlight), Ramin Bahrani (The White Tiger), John Turturro (presented by his Severance director, Ben Stiller), and Cooper Raifff (presented by his Cha Cha Real Smooth co-star, Dakota Johnson).

Speaking of Cha Cha Real Smooth, Raiff’s sophomore effort played today at NFF. I was able to catch Cha Cha before heading to Nantucket and wanted to use this space to share my thoughts on the movie. Cha Cha is one of the very best films of the year. I absolutely loved it. Raiff wrote, directed, and starred in this quirky, lovable comedy about Andrew, a college graduate who has no idea what his next move is. While fumbling around working at a fast-food restaurant and sleeping on the floor in his little brother’s room, Andrew discovers a hidden gift he has for getting parties started. He takes on new work as a dance motivator at his community’s bar and bat mitzvahs, where he meets Domino (Dakota Johnson) and her autistic daughter, Lola (Vanessa Burghardt). The trio begin a unique relationship that begins a journey of self-discovery for young Andrew.

Some have argued that Cha Cha Real Smooth is too sweet and kind, while others feel it strikes all the right notes in that regard. I found it to be incredibly appealing and was quite absorbed in the relationships that Andrew struck up with everyone he came in contact with. Whether acting as a mentor to his younger brother (Evan Assante), bonding with Lola, or falling for Domino, Raiff’s film is chockfull of innocence and wonder. Some of the more tenderhearted moments of the film are shared between Andrew and his mother, played by the great Leslie Mann.

Johnson gives the best performance of the film, playing a young mother engaged to a fiancé (Raúl 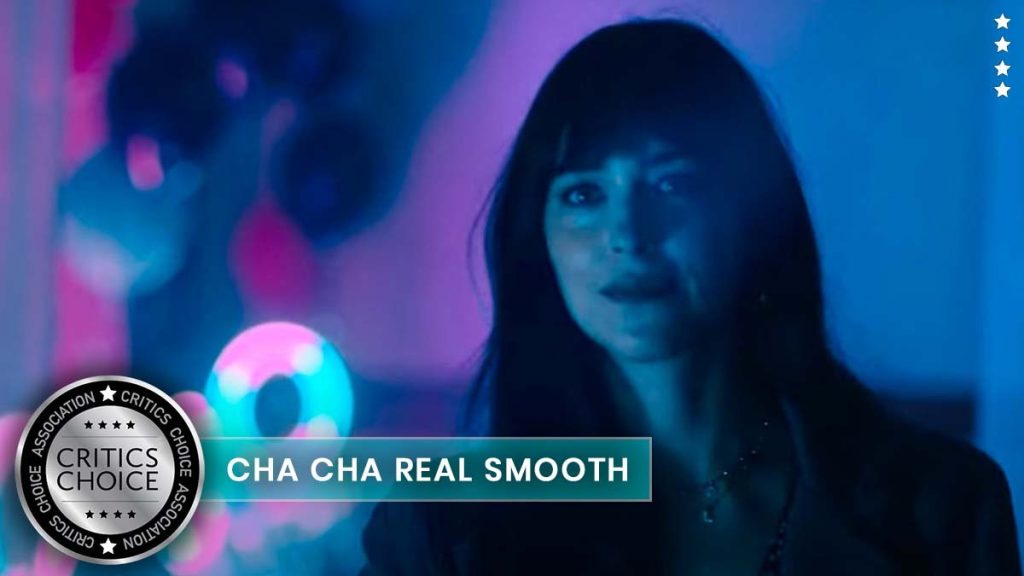 Castillo) she claims to love, despite her actions showing there is still something unfed lingering. That hunger comes out in her magnetic attraction to Andrew. Johnson is fantastic as the young woman who has made some bad decisions in her life, despite being an incredibly well-intentioned and genuine person. Domino is at a fork in the road of her life, and in that regard, the film is also a journey of self-discovery for her. The chemistry between Johnson and Raiff is effortless and palpable, reminding me of what Scarlett Johansson and Bill Murray pulled off in Sofia Coppola’s Lost in Translation.

Cha Cha Real Smooth is as charming as it gets, a delightful and bewitching story about growing up, getting out, and unscrambling the mysteries of finding your place in the world. The eccentric humor and emotional honesty of the film leaves you feeling upbeat and nourished, something we could use more of from our movies today.

You can read Clarence Moye’s outstanding full review of the film, here. 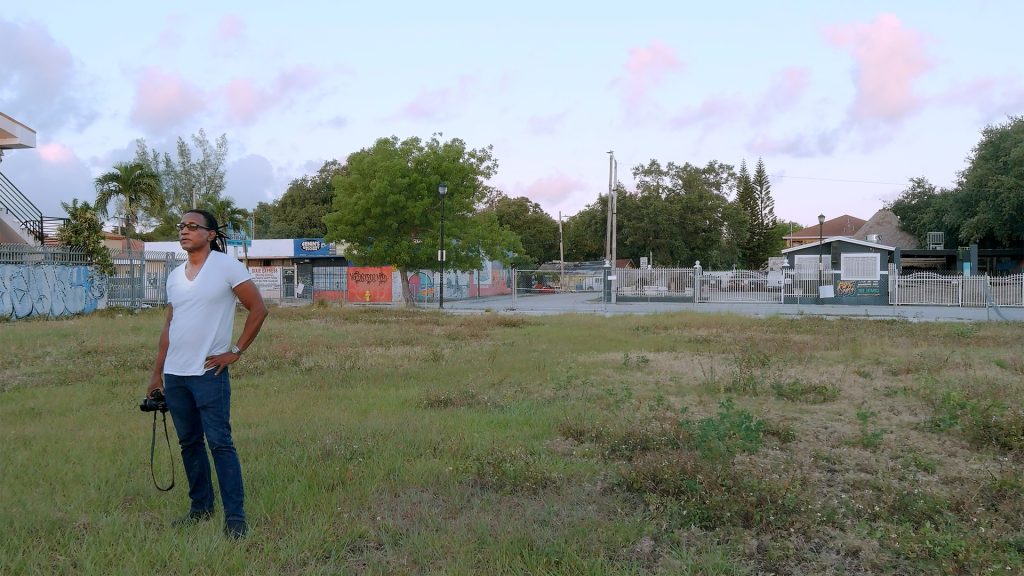 My first film of the day was Heidi Ewing and Rachel Grady’s Endangered, which provides a very relevant look at the state of the freedom of our press today. The role of the newspaper and news reporter has changed significantly over the past fifty years. I’m old enough to remember a time when news anchors like Dan Rather, Peter Jennings, and Tom Brokaw delivered the news in an honest, often impartial way. These were icons of their time, standing on the shoulders of giants that came before them like Edward R. Murrow and Walter Cronkite. The press, and the American people that tuned in nightly, understood their role in creating a system of checks and balances with our government.

Fast forward to a new era – post-Trump – where corrupt politicians from all over the world, including right here at home in America, work to discredit journalists. In Endangered, we witness the impact of that slander and the burden it places on the safety of four journalists: one in Mexico, one in Brazil, and two working in the United States.

In Mexico, many journalists go missing or are found killed. Ninety percent of their cases go unsolved. The rise of the “fake news” era has led to a 25% reduction in newspapers since 2004. The film examines how people are now more likely to get their (mis)information from Facebook and YouTube, where it is impossible to sift the truth from the lies. Endangered also makes it clear that the January 6 attack on the Capitol Building was the culmination of the war Trump waged on the press for four years.

Endangered is a timely, seething view at an industry under siege. It is extremely well edited, merging the stories of four journalists together, weaving a web of infuriating evidence that our freedom of press is in an urgent state of collapse.

While I wish it spent more time covering one of the bigger problems (the fact that the media does, in fact, swing liberal), it effectively covers the lack of humanity that is shown to our press, and how our country has been so divided by extremism. As one Trump supporter states in the film, “I’m not going to buy a newspaper that does not express my views.” This singular line speaks to all that is wrong with our country. We are so splintered that there is hardly any middle ground left, and because of this, people only want the news presented to them the way they wish to hear it.

After their movie finished screening, the filmmakers spoke about how they hope Endangered will inspire people to get into journalism. “People need information,” and “(we) hope to get free press back on the tips of people’s tongues.” They discussed the struggles of filming Endangered outside of the country amidst the early days of the pandemic, and the work they did to ensure crews were in place to support their subjects in Mexico and Brazil.

Unfortunately, and admittedly, the directors understand that those who need to see this film the most are the ones who are least likely to watch it when it plays on HBO next week. And so we are left with the proverbial chicken and egg situation. Which needs to come first to bring the people back to the table: a news source whose political ideologies are neither left nor right, or a people who are willing to listen when the news source does not express their own points of view. 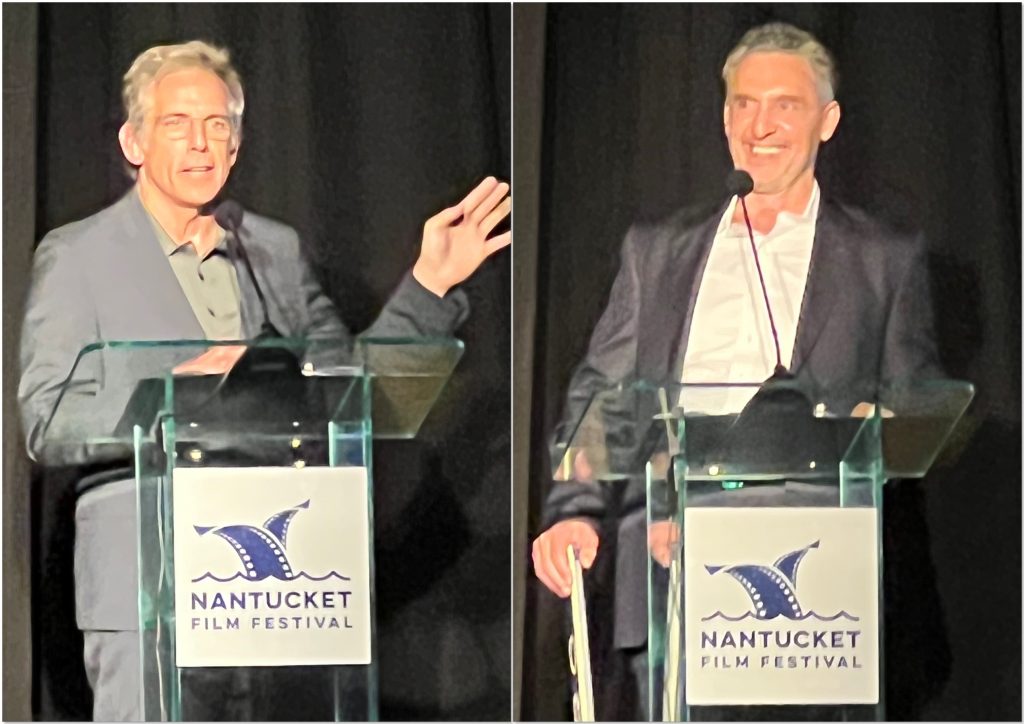 I was able to join the tail end of a screening of Severance, one of my favorite shows on television (AppleTV). Ben Stiller, who directs the series, and John Turturro, one of the show’s stars, were on hand for a delightful Q&A following. The pair discussed how they developed the world of Severance from the mind of show creator, Dan Erickson, the potential for a season two (it’s happening!), the importance of music selection for the series, and how Turturro was responsible for casting Christopher Walken as his on-screen partner, Burt.

That evening, I attended the Screenwriters Tribute. This event is, perhaps, the most exciting scene that takes place at the festival. Prior to the ceremony, we were treated to a champagne soiree at the lovely ‘Sconset Casino (which, ironically, is not a casino). Following the cocktail hour, awards were presented for a variety of accomplishments. The festivity was hosted by Ophira Eisenberg and Bethany Van Delft. Barry Jenkins (Moonlight, The Underground Railroad) received the Screenwriters Tribute Award, and accepted graciously via satellite. Heidi Ewing and Rachel Grady (the directors of Endangered) presented the Special Achievement in Documentary Storytelling Award to Ramin Bahrani, whose film, 2nd Chance, played at this year’s festival. Cooper Raiff (Cha Cha Real Smooth) was honored with the New Voices in Screenwriting Award, which was dedicated to him via a recorded speech from Dakota Johnson. The final tribute was the Compass Rose Award for Career Achievement, which was presented to John Turturro by his Severance director, Ben Stiller. While paying homage to Turturro, Stiller described his acting abilities with singular words – “Physicality. Intensity. Depth. Precision. Intensity. Subtlety. Sensitivity. Intensity. Versatility. Intensity” – which got a great laugh from the crowd.

It was an incredible event. I was able to meet Turturro, Raiff, and Stiller (who I told how much I love his character and performance as Chas in The Royal Tenenbaums). All three gentleman were gracious and easy to approach, which is always nice to see. Whoever said “never meet your heroes” got it all wrong. I am grateful for this extraordinary opportunity.

The Case For: STARZ's 'Gaslit'