The State of the Race: The Oscars – Past, Present and Future

by Sasha Stone
in BEST PICTURE, featured, News, The State of the Race
53

Download: The State of the Race: The Oscars &#8211; Past, Present and Future

The Oscars are now in their 94th year and are attempting to survive in a changing industry and world. Like most institutions of power in this country in 2022, they mostly rely on the loudest voices in the media and on Twitter to guide them into the Gen-Z world order that has arrived at our doorsteps.

We’re in the middle of a pendulum swing, a hinge moment where what worked in the past isn’t going to work anymore. One of the problems covering film and the Oscars right now is that we’re all afraid to speak plainly. It’s kind of when an underling waits for a superior to say, “At ease, soldier.” We are always at attention, always fearful of what someone might think of us, or of making a misstep that could potentially threaten our status or our jobs.

This is the downside of any utopian society. Sooner or later, it only has two options: collapse or become more authoritarian. Or I guess we could become more authoritarian and then collapse. Either way, it does seem clear that there is a sea change afoot. If I may speak plainly without incurring the wrath of my readers or Twitter (like, how much worse could it get at this point?) I would say that we are finally hitting the backlash phase that some of us saw coming.

The backlash would be aimed at “woke” Hollywood. However well-intentioned, however successful the mission, the end result is that people are still out there paying for content they want to see, and are probably going to become less interested in “do better” content, messages, or agendas that drive society towards “correct” thinking.

Nothing has really changed, power-wise. The same people who were in power before are still in power. There has been an effort to give everyone a seat at the table, such that every single film or television show has a checklist. And, of course, that includes the Oscars. Watching them spin plates so as not to offend anyone is, frankly, exhausting. It doesn’t matter what it is – it could be a Broadway show, a book, even Saturday Night Live — they all end up having a kind of hostage video look about them. Fake smiles for a fake world that depicts fake fairness. It is what it is.

The Oscars, like most of Hollywood, exist very much on one side. The problem is that it isn’t just Trump World they are now alienating, it’s reasonable people in the middle who are opting out of watching films or television shows that overtly push an agenda. We already know this is so baked-in, only a few brave voices are now rising up to challenge it. Netflix has done this. They’ve taken a stand both in terms of platforming Dave Chappelle and Ricky Gervais, but also notifying employees that if they think “words are harm” they might not be suited for Netflix. They are the first major entertainment giant to take that brave stand. Good for them.

The Oscars, however, are still trapped in their gilded cage of Woke. They can’t break free from it for the same reason Joe Biden and the Democrats can’t. They value their image in their community more than they value profit. They can’t afford the self-righteous rage storms on Twitter that ensue any time they open the cage door and flirt with flying free.  Maybe you like it this way, maybe you don’t, but the simple truth is that the majority is starting to hate all of it.

This is a gathering storm for Hollywood and the Oscars. Audiences are just starting to tune them out. This was made abundantly clear with the rollout of Pixar’s Lightyear.

Figuring out why Lightyear failed is difficult because, as with all things on the Left now, you have to go through that first layer of people not wanting to offend by speaking hard truths.  Whatever the reason for Lightyear’s failure it can’t be the “woke stuff,” even if anyone can plainly see Lightyear is making every effort to be as inclusive as possible. But it has that same hostage video look about it. They’re trying to make everyone happy and in so doing seem to kind of lose the point of any of it.

The conservatives for their part will point to the gay kiss as the main off-putting element, and the publicity around that certainly didn’t help. Parents aren’t eager to bring their kids out to a movie where there is a much-publicized kiss — to them, it sounds sexual and why would they want to bring their kids to anything that has anything remotely sexual about it? If there was one thing we learned in the 90s it’s that there has to be a healthy boundary between parents and kids when it comes to sex.  So people will say a kiss isn’t sex, but in general, kisses aren’t really present in animated movies all that much, as I recall.

Either way, bringing this up will put you in a struggle session with too many people for it to be worth your time. The bottom line is that it probably didn’t exactly have parents speeding to the multiplex. But that wasn’t all of it. It had other problems, I gather. It reminded me of the movies that hit theaters last year, King Richard and West Side Story that audiences shunned. I think they avoided them for a similar reason as Lightyear: they believed they were going to be “do better” movies, or “think correctly,” or “be more woke.” Whether they actually are or not is beside the point. Audiences think they will be so they avoid them. 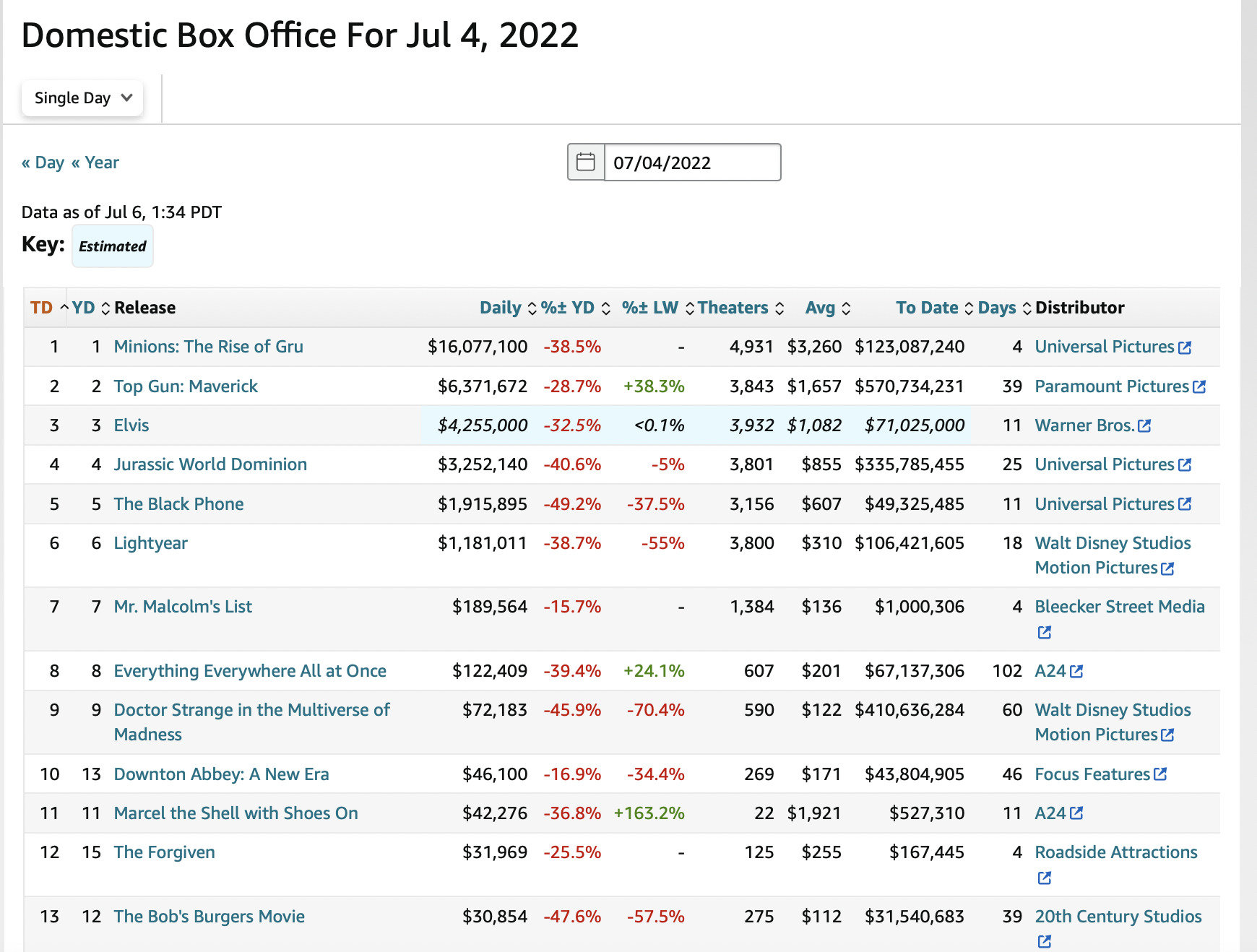 I bring all of this up because things don’t look all that hopeful of late, with the strident thought policing online, the inhibited nature of film journalists, and the state of the Oscars overall.

I could talk about how we arrived at this point – a whole generation of internet natives coming of age on Tumblr and re-ordering the power hierarchy and then insisting the whole world change to suit those new rules, Twitter being an arena for public shaming, how the Left became the side that sought moral purity and salvation. Whatever it is that brought us to this point does threaten the things that define greatness by almost any measure.

Critics will viciously savage any film or TV show that doesn’t follow their rules, or is even aimed at the non-woke among us. Hollywood then remains paralyzed in fear of associating with the baddies. Until someone goes in the water, the entire industry will remain afraid of sharks.

TikTok is a Chinese-owned company, which might explain why it isn’t exactly micromanaging thought the way other social media platforms are. It sounds weird to say that about China – but China doesn’t particularly care about the Left or Right here in this country. They find the woke thing kind of hilarious (they call it the Baizuo). I would imagine their main goal would be to spread goodwill for China while also making money. TikTok is so addictive, though, one could just disappear inside of it and never come out, which would be a great way to destroy this country if China ever wanted to do that, not that they do!

I have found TikTok to be a breath of fresh in an increasingly suffocating ecosphere of Twitter, journalists and how they cover film. TikTok brings enthusiasm back to the people and that enthusiasm is contagious. There is less judgment on TikTok because it’s harder to build hives or tribes. They happen, of course, but most users scroll their “for you” page, which offers up random content based on their own viewing behavior. They give you what you want to see.

Generation-Z is using TikTok more than any other platform at the moment and its reach is growing: 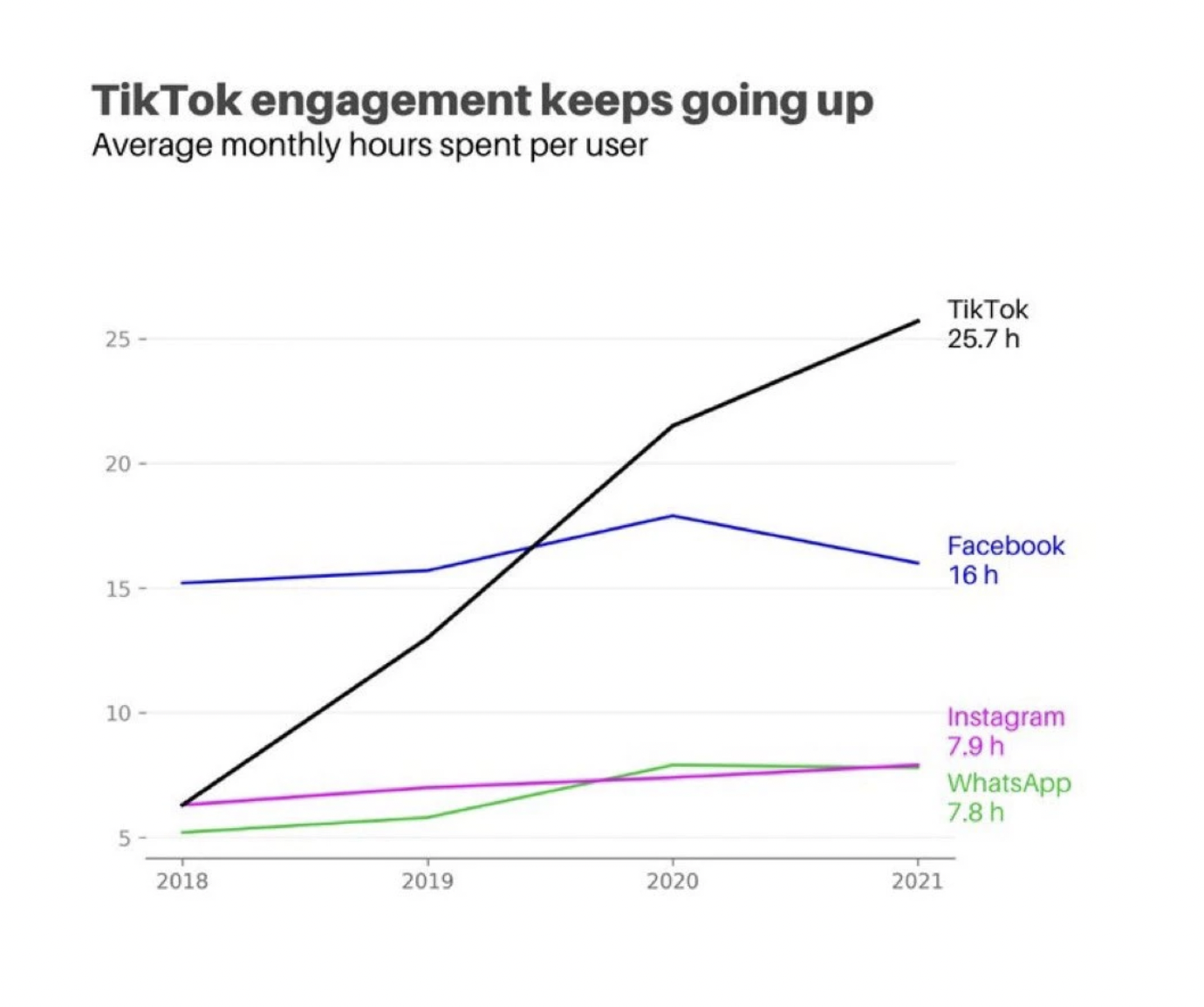 I first noticed the power of Tik Tok with the Johnny Depp/Amber Heard trial. The groundswell of support for Depp subverted the powerful alliance of Twitter and mainstream media which ended up changing public support for Depp. TikTok is a more humane approach to social media because we’re watching human faces — and that is how we evolved to encounter and associate with one another, as opposed to words typed out on a screen, which can be interpreted in a number of ways and are often distorted. Someone speaking is a far preferable way to get a read on what they actually mean.

Baz Luhrmann’s Elvis is starting to overtake TikTok. There is a world of difference seeing Luhrman himself introducing his film Elvis than just a tweet about it.

Baz Luhrmann on Tik Tok is, like, the greatest thing that ever happened. He has taken to it like a duck to water. And honestly, why not? It is far preferable to the boring and uptight scolds on Twitter. And you can mainline it to Gen-Z, if that’s your bag. Elvis is actually turning into a bit of phenom on TikTok, and you love to see it.

The energy for the film and specifically Austin Butler’s performance has people talking about the Oscars with excitement again. That is something I thought I would never see outside the confines of the Oscar blogging game. To hear young people become so moved by a performance they start thinking about, and getting excited about the Oscars is a hopeful sign that there is a future for the golden God after all.

Hey, it might turn out that TikTok is the thing that leads to the demise of our species. If so, at least we’ll go out dancing and having a good time instead of the nonstop hatred and dehumanization that has come to define the Twitter experience, and is something desperately needed.