Chiwetel Ejiofor: The Man Who Fell From the Emmys

Download: Chiwetel Ejiofor: The Man Who Fell From the Emmys

Getting overly emotional about Emmy nominations is something I’ve put in the past (at least now that Rhea Seehorn finally got her just deserts). To be fair to Television Academy voters, there’s simply so much content out there, and a lot of it is very good. No one can see everything, and you can only expand the number of slots in a given category so much before watering down whatever value the award has. As a result, there are bound to be so called “snubs,” or perhaps we can just call them “disappointments.”

I had made peace with the idea that Chiwetel Ejiofor was not going to get nominated for best actor in a drama for a number of reasons. Despite the quality of the show and his performance, The Man Who Fell To Earth never got “buzzy.” It’s also a sci-fi show, and those tend to be overlooked. Finally, I just don’t know if enough people saw it. But while I understand there are only so many hours in a day, the fact that Chiwetel Ejiofor didn’t receive recognition for Alex Kurtman and Jenny Lumet’s remarkable reimagining/continuation of Nicolas Roeg’s 1976 film starring David Bowie still made me wince. It’s proof that even the expected can sting.

It’s not like The Man Who Fell To Earth didn’t receive good reviews from critics—and I don’t know a single person who’s seen it who doesn’t love it—but I suppose there just weren’t enough Academy viewers to garner the necessary votes for the show in any category. To my mind, the show deserved recognition for best drama, actress (Naomie Harris), supporting actor (Jimmi Simpson or Clarke Peters), direction, and writing (the show did garner a much-deserved nomination for visual effects).

Above all else though, it is the performance of Ejiofor that is most meritorious. Ejiofor has been a fabulous actor for a long time (Dirty Pretty Things and 12 Years A Slave attest to his excellence), but, and I know this is a huge statement when considering his resume, I believe that his work as Faraday in The Man Who Fell To Earth is, at this moment, his crowning achievement. Yes, I know what I’m saying. Hell, I love Dirty Pretty Things and 12 Years A Slave so much that I can get a lump in my throat just thinking about either of them.

But the thing that sets The Man Who Fell To Earth apart from those two extraordinary acting achievements is the unusual nature of the role and its singular degree of difficulty. When we first meet Faraday, he is naked, emotionally stunted, and so in need of water that he hooks himself up to a water hose, pushing god knows how many feet of it down his gullet (“I have four stomachs,” he later explains), and is soon surrounded by a redneck with a rifle and incredulous police officers. In a way, it’s a ridiculous scene. Indeed, I laughed aloud multiple times, but what makes this introduction so remarkable is that the humor and outrageousness of the moment do not detract from its inherent drama. The Man Who Fell To Earth balances its comedy and drama so elegantly, on the head of a pin, and the biggest reason why it works is its lead actor. 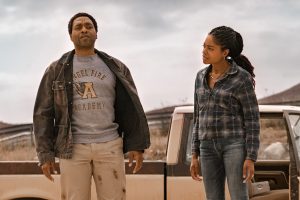 As the alien (Anthean) who comes to earth in search of life-saving resources for his planet, Ejiofor is a mature “drone” of superior intelligence without any sense of nuance or context for life on earth. From episode to episode, Ejiofor incrementally becomes more fluent and able to access human emotion. What he’s doing in The Man Who Fell To Earth is almost imperceptible—invisible from moment to moment—yet, over the course of ten episodes, we are pulled along by this remarkable actor playing this extraordinary character through his subtle growth from drone to human. What we see in Ejiofor’s performance is a full-grown man being born. What makes Ejiofor’s performance all the more gobsmacking is to know (as Alex Kurtzman relayed to me when I interviewed him), that, as most shows and films are, the show was shot out of sequence. This means Ejiofor had to always be cognizant of where Faraday was in his development, his ability to enunciate, communicate, form words, and do so in such a fashion that you believe he has evolved, by the end of the season, into a Steve Jobs-like character who can hold a stadium-full of people in the palm of one hand and a world-changing energy source in the other.

The restraint required of Ejiofor might make it appear, at first glance, as if he is doing almost nothing. But the exquisite minimalism of his work in the early episodes that leads to a fully formed human being (by way of Anthea) by the finale is always available to the viewer if they are paying close attention. While Ejiofor fixes his eyes in a way that makes them seem like they are made of glass, he still somehow emanates an inner life and light that slowly blooms until we, the viewer, have absorbed one of the most incredible arcs of a character that I have ever seen.

The way he learns to read humans, his grasp of our need for attention, and the desire for our egos to be fed is perfectly evinced in his interview scene with an intrepid reporter (well-played by Victoria Smurfit). When Faraday touches the knee of Naomie Harris’ character, Justin, knowing that the muckraker in front of him will want to turn the focus back to her (because he recognizes the reporter’s competitive nature) it is so inconspicuously performed by Ejiofor that you could be forgiven for missing how profound the act is. In that moment, Ejiofor quietly uses the reporter’s nature against her to achieve his aims. He has recognized, and perfected, the human art of manipulation.

Even more extraordinary is the scene between Faraday and Justin where he reveals how he has come to not only understand the concept of love, but to feel love himself. He tells Justin how he has seen her daily acts of love, such as tending to her ailing father, braiding her daughter’s hair, and forgiving Faraday for his behavior, and that she does these things “without thinking.” He explains how, by bearing witness to her kindness, decency, and caring, it is impossible to not understand what it is to love. The scene is written in wonderfully straightforward terms. There are no swelling strings as Ejiofor makes his declaration—only a man who has discovered his capacity for something beyond duty and service (drones are essentially worker bees on his planet). Words fail to describe how moving the moment is. And in the hands of many other actors, the temptation either to go big, or lay it on thick, would have been difficult to resist. Not so with Ejiofor. His performance is so steadfast, true, and perfectly modulated, that he seems to not be acting, but rather performing a kind of alchemy.

Can you imagine the confidence required to give the performance described here? To not be afraid to look silly, and to trust the audience to follow along when, if he were a lesser actor, his character could be seen as empty or mechanical? It’s brave, majestic work. I can barely think of the scene where he completes Bill Nighy’s (as Thomas Newton, the Bowie character from the 1976 film) sentence without breaking down:

“Tell my wife I love her very much…”

The scene pays tribute to David Bowie (the two lines are taken from his song “Space Oddity”), while also cutting to the deep emotional core of loneliness that both Newton and Faraday are experiencing. They both left their homes and families to try to save their civilization, and the cost of doing so is steep. The expressions on both actors’ faces express there pained states of mind so vividly that I haven’t stopped thinking about it since viewing the episode several weeks ago.

I’ve long believed that actors are magicians. Think of the greatest actors of all time—Streep, Pacino, DeNiro, Brando, both Hepburns—and the breadth and width of the characters they played over their storied careers. How is it possible to be so many people so effectively?

It is my fervent belief that Chiwetel Ejiofor has entered into that select group of actors who make us believe anything is possible. I know because I’ve seen it in The Man Who Fell To Earth.

Emmy nomination or no, Chiwetel Ejiofor is a magician, and it needed to be said.