August is way too soon to be predicting the Oscars in any meaningful way. It’s important to remember where we are right now in the film industry and in the Oscar race. We have come through a transformative year, 2020, that completely shuffled the deckchairs on the Titanic. It already felt like things were headed in a slightly less wonderful direction before COVID and the social justice revolution. But after 2020 nothing has been the same.

There has been a moratorium on white men as directing contenders, for starters. No white male director has won since Damien Chazelle did it in 2016 for La La Land. That year the simmering rage started against that movie and that director. Even Ryan Gosling’s character picked up some heat for the “explaining jazz” fake controversy. Then there was Three Billboards Outside Ebbing, Missouri’s fake controversy, and Green Book’s win the year after was the final nail in the coffin. Nothing would ever really be the same after that. Most people assume this was an indirect response to not being able to get Trump out of office. Perhaps it was.

2020 put Biden in power and the nervousness and purges have continued. If anything, things have become a little less open and free, more punitive and oppressive in terms of artists. The pandemic hitting the Oscar race was like the Titanic hitting an iceberg. By the time it was over, all of the debris from the passenger baggage was floating on the surface of the ocean and no one could tell what was what.

Here we are two years later, and we’re mostly returning to in-person events. People are still getting COVID right and left but, thanks to the vaccines, they are more or less surviving it. Are they returning to movie theaters? Well, they went to see Top Gun: Maverick, Elvis, and Everything Everywhere All at Once. It’s half a good ending, half a nervous-making beginning. Where do we all go from here? Will there be any Category Five shitstorms that will take out a movie? Well, sure. How could there not be?

I will be sitting in my usual place, the cockpit, fighting them as they erupt. We’ll just have to see how it goes. For the most part, Hollywood has reordered itself to deflect any shitstorms, even to their own detriment. The films on tap, at least from what I can see, are contemplative character dramas, about remembrances of things past, and about social justice issues like assault, empowerment, etc.

Right now, in this extremely polarized country that is engaged in a cold civil war, the Oscars reflect a certain segment of the population — the progressive aristocrats, if you will. Their problems tend to be existential more than they are practical. You’re generally not going to see movies about people who live in, say, Iowa trying to save the family farm. Or a story of an Uber driver trying to survive lockdowns. Or the story of an anti-vaxxer who was kicked out of the military. The truth is, there are so many stories to tell but Hollywood is mostly restricted to one side and one ideology. That makes it a wee bit, a tad bit, erm, boring. But it also makes it more predictable.

But speaking of the Globes, if they do return to rock with their cocks out (which I hope they do), they might open up some of the locked doors and allow for different kinds of movies to get in. Maybe they will, maybe they won’t. Who knows.

Now that we’ve got the doom and gloom out of the way, let’s get on with the show!

Festival season is coming up. This is the most exciting time for the Oscar race. Let’s check in with Michael Patterson and see what he’s got predicted for the Telluride lineup:

And the updated chart for fest gets from Marshall Flores: 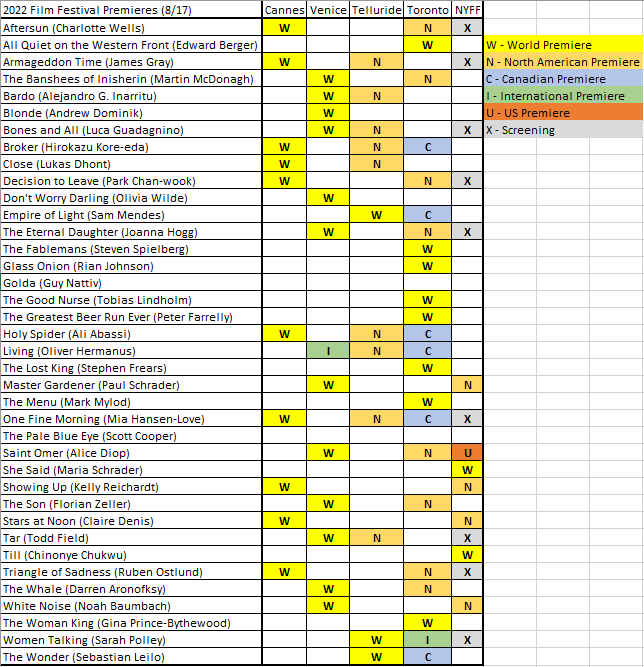 Since Best Picture has come from many different sources over the past few years, we really don’t know which film will spring up. We also don’t know what the driving narratives will be heading in. These films, at least from the onset, are reflective of the community of Hollywood. So with that in mind, let’s head over to AwardsWatch to look at those predictions, and then, for the fun of it, I will give you a rough estimate of what I would predict in the major categories if someone forced me to.

I thought it might be fun to look at Erik Anderson’s predictions from this time last year — and honestly, they’re not bad. So perhaps he is onto something here. I would wager his guesses will be better than mine. This is dated August 27:

He only missed three out of the final ten: Drive My Car and two that were in his alternates, Licorice Pizza and Don’t Look Up. That’s really good.

So, I wasn’t far off either. We both only missed three in our predictions — we just had different predictions. All in all, not THAT bad. And just for the extra super fun of it, let’s go back another year.

Missing from his list: Sound of Metal and Promising Young Woman.

So I think I have to give the edge to Erik overall when it comes to predictions pre-festival. It’s much easier after the festivals.

Now let’s look at Erik’s predictions for this year, and I’ll add mine below:

I find it kind of interesting, but I’m wondering why Avatar is so low. I would never count out James Cameron for Best Picture. He’s kind of batting a thousand in that regard, no? He might not be the best writer of dialogue, but he is a great director, without a doubt. So I don’t agree with Erik on almost anything here, but it’s still interesting to look at.

I will now do my own Best Picture predictions, but it should all be taken with a huge grain of salt, as you can see by our past predictions.

Seen:
Elvis
Everything Everywhere All at Once

On the bubble: Top Gun: Maverick (they would be fools not to nominate this), The Son, Tar, White Noise, Women Talking