The Hamptons International Film Festival celebrates their 30th anniversary this year. The festival runs October 7th-16th, and is one of the more memorable galas I’ve been fortunate to attend (2018). See below for information on the poster, designed by Stanley Whitney, as well as additional information about the festival. 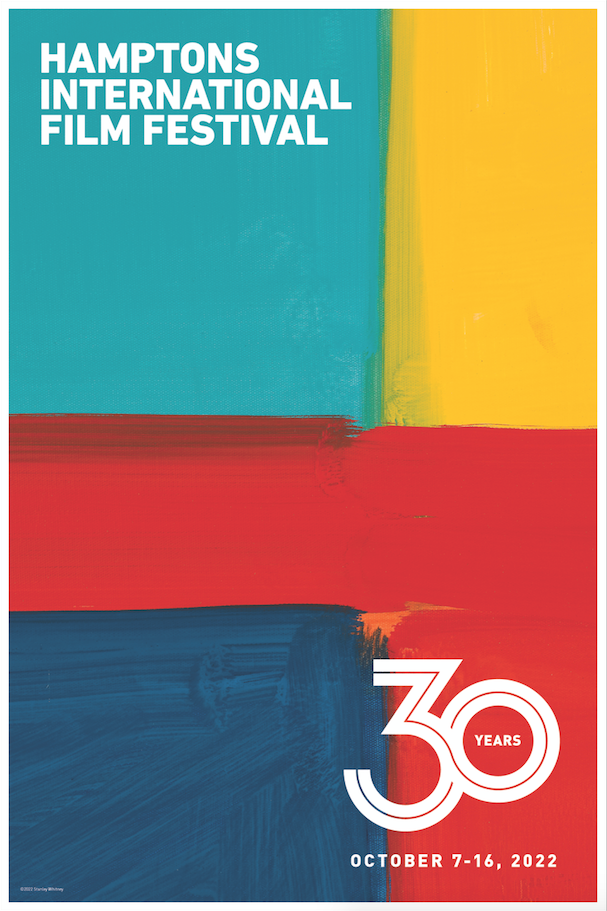 East Hampton, NY (August 31, 2022) – The Hamptons International Film Festival announced today the 30th anniversary poster by local artist Stanley Whitney. Whitney is an award-winning artist, living and working in New York and Eastern Long Island. He created the 2022 Hamptons Film Festival poster in honor of the 30th anniversary based on his signature pieces of ever-shifting grids of multi-hued blocks. The Poster is a cropped section of Whitney’s painting Rare Bird, 2014.

Whitney is a professor emeritus at Temple University, Tyler School of Art for painting and drawing. Whitney’s previous exhibitions include: ‘Stanley Whitney: The Italian Paintings at the Palazzo Tiepolo Passi, Venice, Italy (2022), ‘Focus – Stanley Whitney’ at the Modern Art Museum, Fort Worth, TX, USA (2017) and ‘Dance the Orange’ at the Studio Museum in Harlem, New York, NY, USA (2015). Whitney has also been included in many prominent group shows, such as ‘Inherent Structure’, Wexner Center for the Arts, Columbus, OH, USA (2018); Documenta 14 in Athens, Greece and Kassel, Germany (2017); ‘Nero su Bianco’ at the American Academy in Rome, Italy (2015); ‘Outside the Lines: Black in the Abstract’, Contemporary Art Museum of Houston, TX, USA (2014); ‘Reinventing Abstraction: New York Painting in the 1980s’, Cheim & Read, New York, NY, USA (2013); and ‘Utopia Station’ at the 50th Venice Biennale (2003). Whitney is an award and prize winning artist having received the Robert De Niro Sr. Prize in Painting (2011), the American Academy of Arts and Letters Art Award (2010) and awarded a Guggenheim Fellowship (1996).

The 2022 edition of the Hamptons International Film Festival will take place October 7-16. Passes and packages will be on sale after Labor Day, beginning September 6, 2022. Additionally, a weeklong special Founder Pass sale is taking place through September 5, 2022.

HamptonsFilm, home of the Hamptons International Film Festival (HIFF), based in East Hampton on the Eastern End of Long Island, was founded in 1992 to celebrate the art of film and to introduce a unique and varied spectrum of international films and filmmakers to our audiences. A non-profit organization with year-round screenings of global narrative and documentary films, an annual Screenwriters Lab, a summer documentary showcase, and extensive educational initiatives, HamptonsFilm offers programs that enlighten, educate, and provide invaluable exposure for filmmakers, while also providing the East End of Long Island with an educational and cultural experience that enriches the lives of its citizens and contributes to the local economy.  HIFF, celebrating its 30th anniversary this year, is an annual premiere film event in New York State with an intimate showcase of some of the year’s best offerings in contemporary cinema from around the world. Awarding prizes to filmmakers in cash and goods and services of over $130,000 each year, with over $4.5 million awarded in competition funds and services over the past 29 years, our program continues to play an important role during awards season. For 12 consecutive years, through the 2021 awards season, HIFF screened the eventual Best Picture winner at the Oscars, making it the only festival in the world with this distinction.  For more information, please visit hamptonsfilmfest.org.